At the wedding of her best friend Jiang Yu, Bei Xiaoxiao looked at the stage excitedly. She had attended many weddings before, most of them were of relatives. Jiang Yu was her first friend who got married. She was still in college and got married at the age of 21. After giving birth to a child, next year, she would graduate as the student recommended by the Fashion Department of Shenda University. Jiang Yu's life was more fulfilling than anyone else's.
When the host announced that the newlywed couple would exchange rings, Bei Xiaoxiao looked at the man she had admired and gave the ring to her best friend, and couldn't help crying.
"Woooooooooooo..." Bei Xiaoxiao snorted and cried, and looked at Jiang Yu with tears in her eyes. "Taro Ball, you must be happy! I will take care of you and be happy too! Woo woo woo..." Although Bei Xiaoxiao was not as calm and self-controlled as Jiang Yu, she seldom cried, but seeing her friend getting married, she couldn't help it.
Gu Linlu, who was sitting at the next table, looked at this Little Peppa Pig, with tears on her face. He frowned slightly and turned his head in disgust. When she cried, her face turned red and with her originally roundish face, she looked even more like Peppa Pig!
...
The wedding finally ended, Bei Xiaoxiao grabbed the bouquet and was so happy, until the end, she raised her lips and hummed with a smile. Then her phone rings. It was her mother who called, and Bei Xiaoxiao's expression directly went a little sluggish. She only picked it up after a while. "Mom."
"I told you to go home, why haven't you come back yet?"
"I'm attending a good friend's wedding, I'll go back tomorrow."
"Okay, I don't care which of your friends get married, come back tomorrow, we have something to announce to you!"
Putting away the phone, Bei Xiaoxiao was stunned for a while. Her always smiling face suddenly became expressionless. Yao Cuilan said a few days ago that she had something to announce and wanted her to go back. What was the hurry?
Yao Cuilan and Bei Yanjun often quarrel, and their relationship had always been bad. They shouted that they would divorce each other every three days. When Bei Xiaoxiao was studying at home, once the two quarreled, Bei Yanjun would smash the house into a mess, he didn't care what kind of bad influence such a family will have on her that was preparing for the college entrance examination. In fact, since childhood, Bei Yanjun would never take her seriously.
Yao Cuilan would quarrel with Bei Yanjun at the beginning. But after too many fights, she was also numb. She let him make trouble, he smashed the TV and the computer while she hid in the room and slept. She also didn't care about Bei Xiaoxiao her daughter.
Bei Xiaoxiao always felt that she missed something, but what?
"Xiaoxiao, what are you thinking?" Jiang Yu came over, took Bei Xiaoxiao's hand, and said with a smile, "Let's go! After the banquet, Gu Shenliu asked us to gather together."
Many friends came back from abroad. Although Gu Shenliu bought air tickets for these people, the wedding banquet ended at noon, so he suggested that everyone who was free should gather in the afternoon.
The people who came and go in the Gu family were either rich or super rich, so considering this, they would all go. Therefore, almost all the guests at the banquet attended the afternoon party.
The party was arranged in the luxury box of the hotel. During the period, the men drank, the women sang, and everyone had fun.
Jiang Yu was pregnant and couldn't drink, so she always felt unhappy. The first time, she found that Bei Xiaoxiao was drinking too much. Her round face was blushing, so Jiang Yu pinched it with a smile, and it felt very good!

"Xiaoxiao, I may not have time to take you back today. You stay at the hotel for one night and leave tomorrow?"
Gu Shenliu had booked a lot of rooms in the hotel. The guests who were from far away lived here. Those who drink too much could also sleep here. It was inconvenient for Jiang Yu to send Bei Xiaoxiao back because of her big belly. But Bei Xiaoxiao, a now drunk girl, without her watching, what should she do if something happens.
So Jiang Yu thought it would be better for Bei Xiaoxiao to stay in the hotel.
"I'll take you to your room!" Jiang Yu supported Bei Xiaoxiao.
"No! Taro Ball! I'll go by myself! I can find it!" Bei Xiaoxiao glanced at the room card. "Hmm...606?"
Jiang Yu rolled his eyes, "It's 909! See, how can I leave you alone!"
Just as Jiang Yu was talking, Gu Linlu came over, his expression was the same as usual, and he still had the same indifferent appearance. If it wasn't for his erratic steps, Jiang Yu almost thought he hadn't drank a drop of wine.
In fact, when the younger brother got married plus the fact that Father Gu couldn't drink too much, of course, Gu Linlu, the elder brother, blocked a lot of alcohol for his younger brother.
"Hey, big brother! Are you going to rest?" Jiang Yu asked with a smile.
"Yeah!"
Jiang Yu gave Gu Linli the room card, looked back for Bei Xiaoxiao, but saw that she had left at some point. At this moment, Jiang Yu's stomach felt a little uncomfortable, so she sat on the sofa. She said to Gu Linlu, "Big brother, please help me send Xiaoxiao back to her room, she seems to be drunk!"
Gu Linlu responded, turned around and left, he quickly followed Bei Xiaoxiao that wad staggering to reach the ninth floor. She found 909, finally entered the door, only to see the door slammed open right after.
A tall figure stood at the door.
"Big Big... Brother Gu?" Bei Xiaoxiao said with a her numb tongue.
Gu Linlu snorted and pulled his tie impatiently. He pushed up the glasses on the bridge of his nose, and said solemnly, "Well, it's me!" Strange, this girl in front of him had a round face and round eyes, and white skin and pink cheeks.
Gu Linlu felt that he was really drunk, otherwise why would he suddenly want to kiss the girl?
Seeing the man's face approaching, the long, narrow and deep eyes similar to Gu Shenliu's gleaming dangerously, Bei Xiaoxiao swallowed, and suddenly felt that she was a pig that was going to be slaughtered. The slaughtering knife was ready, just waiting to cut her.
"You you you……" At present, as a hardcore member of the Face Loving Association, Bei Xiaoxiao held her chest up and said: "Humph! If you go one centimeter closer, I'll eat you!" 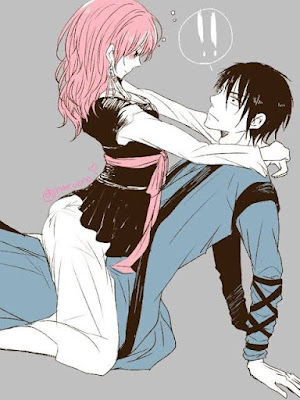 Gu Linlu paused for a moment only to feel that the little pig in front of him was unexpectedly noisy. He didn't know what to say, but her pink lips were unexpectedly attractive. Of course, the kiss was a kiss, but after the kiss, he felt that it was not enough, and he wanted more subconsciously.
Bei Xiaoxiao just watched her clothes got torn to shreds. Her sober self wanted to call for help, but her current drunk mind said—hahahaha! So cool! Another handsome man for me!
The drunk and horny Bei Xiaoxiao couldn't wait to meet the handsome man, saying that he was too delicious. He had the feeling of a perverted heart under serious appearance. Such a man, when you meet it, you must take it for yourself!
With such a mood the two rolled from the door to the bed, and then had a deep, negative-distance communication.
Gu Linlu was obviously very experienced, and after a few moments, the jerky Bei Xiaoxiao groaned and moaned.
Bei Xiaoxiao hooked her calf around Gu Linlu's waist, imitating the perverted girl in novels she read, and nudging his mouth to Gu Linlu with a hum. She said: "Handsome, can you really do it? I'm going to fall asleep if you don't hurry up!"
Gu Linlu squinted his eyes and they flashed dangerously. He tore off his tie impatiently, pulled off his shirt, lowered his head and entered Bei Xiaoxiao. She was in pain at first, but then it turned into moans. She started enjoying the moves and her already fair skin looked more lustrous and moist. It made people want to bully her.

So, Gu Linlu did. He tossed her again and again, until she cried and begged for mercy, and only then let her go.
What happened next?