The wedding dress was designed by Jiang Yu herself, and the makeup artist was her own team. From the moment she sat down, the team performed their respective duties. Some people curled her hair, some applied makeup, and some did her nails. She didn’t even need to do anything, she could just sit there.
The waist of the wedding dress was high, so after Jiang Yu put it on, no one could see her bulging belly.
"Taro ball! I really didn't expect you to get married so early!" Bei Xiaoxiao was very emotional, holding Jiang Yu, as if she was reluctant.
Jiang Yu laughed, "We meet every day. Whether I marry or not has no effect on our relationship."
Su Ye on the side also smiled. She really admired Gu Shenliu: "Your Old Gu is really amazing. He has hidden this plan from everyone, not only you, but also the media. There was news this morning and everyone was stunned. The paparazzi followed you every day, but as a result, they don’t even know about such a big thing as your marriage. They looked confused and doubted their life. But now, everyone in the circle has received the calls, and I guess the media across the country will be dispatched later!"
After hearing this, Jiang Yu had vague expectations for today's wedding. She really wanted to know what kind of wedding Gu Shenliu would give her. Although she had thought about just getting the certificate and not have a wedding, Gu Shenliu disagreed and bluntly said that he wanted to give her an unforgettable wedding. The Gu family also felt that no wedding would make her got misunderstood by outsiders, they might thought that the Gu family did not like her, so they of course did not want this. Furthermore, with the Gu family's status, the wedding would be a place for people to exchange relationships and connections.
At the same time, many netizens woke up early in the morning, opened Weibo subconsciously, glanced at the hot search as they got up for work. Unexpectedly, the number one hot search today turned out to be #Gu Shenliu Jiang Yu Big Wedding#.
Jiang Yu and Gu Shenliu were the hottest couple right now. Seeing this hot search tag, the first reaction of netizens was hehe. Big wedding? You are kidding! Who are you trying to deceive? Who made this hot search? With the status of the two people, how could it be possible that the wedding was not announced until now? We don't believe it!
But, they still clicked on the tag to see it!
This hoax, is good! Even the photos of the hotel were taken and some hotel staff released the interior decorations of the hotel. From the pictures, the hotel had become a sea of ​​flowers. There were many flowers on the scene, but the colors were simple and elegant. It had the feeling of being in The Wizard of Oz movie.
Netizens suddenly woke up. Sh*t! Are these two really going to get married today?

Although the wedding had been kept secret before, when the helicopter landed on the top floor of the hotel, Jiang Yu heard a loud noise from below the hotel. "Huh? What's the sound?" She couldn't help looking down from the roof. She then saw thousands of people gathered at the entrance of the hotel, many of whom were fans of her and Gu Shenliu, and of course, many reporters. At the moment she lowered her head, the spotlight kept flashing. Everyone raised their heads, picked up their camera or cell phone, and waited to take a picture of her.
Jiang Yu was stunned for a moment and then realized that taking the helicopter was a right decision.
In November, it was still not too cold, so outdoor weddings had become a good choice. Jiang Yu looked at the flower arrangements on the hotel’s garden, and felt as if she had traveled to a fairy tale, "The Wizard of Oz" mixed with "Beauty and the Beast". In such stories, the princess always walked among a sea of ​​flowers. Today, the scene was surrounded by pink and white roses, it was so full as if flowers from all over the world had been shipped just for the occasion. (TN: The novel setting should be in Shanghai, average temperature in November is around 17 – 20 Celsius or around 63 – 68 Fahrenheit) 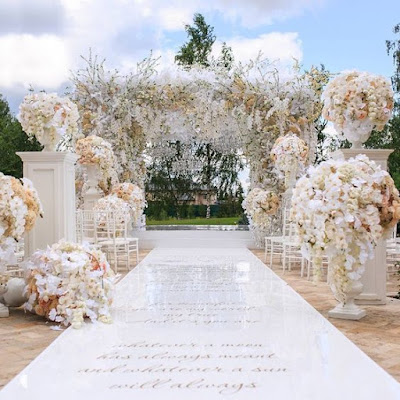 "Where did so many roses come from?" Jiang Yu asked.
Gu Shenliu supported Jiang Yu and said, "In order to ensure the timely supply of roses for the wedding, I started booking all the roses that can be picked a few months ago and shipped all the good roses near d-day."
Jiang Yu smiled and kissed Gu Shenliu. "Thanks."
"It's me who wants to say thank you." Gu Shenliu bowed his head and kissed Jiang Yu on the side of her ear. He took her where there was no one, they stood in the sea of ​​flowers, smelling the fragrance of roses, Gu Shenliu's eyes were affectionate and warm: "Jiang Yu, thank you for giving me a perfect life."
Jiang Yu smiled, today was their day.
…
There was a big screen on the main stage of the wedding, with Gu Shenliu and Jiang Yu’s pre-wedding photos and Weibo photos appearing on the screen in turn. Roses around the edge formed a circular wreath and framed area beautifully. According to Su Ye, this was the largest Wedding floral arrangement ever made in China. A team of 300 florists took a lot of effort to set up this wedding scene by staying up late for several days while keeping the confidentiality of the work. This all was to make the wedding look like a dream.
In fact, Jiang Yu actually thought this was a bit wasteful, but... still very beautiful? Her mood that had never been ups and downs couldn't help but thump when she saw the next scene.