Again 2 chapter today to replace yesterday's upload,
Enjoy~
- MD
*****
Gu Shenliu quickly understood, he no longer looked back, and took Jiang Yu's hand into the hospital.
In this exam, it would be possible to know the gender of the fetus through some identification methods, but Jiang Yu and Gu Shenliu both hoped to keep the sense of mystery. Even if there was a way, it wouldn’t be used. For them, it would be the same whether it was male or female, boys or girls would make them suffer the same.
Only occasionally, Jiang Yu will be a little tangled. "Old Gu, do you think we should check the gender? It's better to buy baby products early. Many girls' clothing sets are so beautiful. Because of this pregnancy, I also have a lot of design inspiration recently. If it's a girl, I think I can design at least a thousand clothes."
"..." Gu Shenliu smiled, touched the top of Jiang Yu’s head, and smiled in a low voice: "Leave some mystery! I look forward to feeling the sensation of meeting the baby for the first time!"
"All right!" In this case, Jiang Yu was no longer persistent. People said that expectant mother had a natural sense on the child's gender, and she always felt that the child would be a boy.
In her spare time, Jiang Yu looked at a lot of baby products and studied carefully, only to realize that raising a child was really a great challenge.
Baby stroller and carrier, Jiang Yu bought the product in advance, and she chose Stokke brand. She chose a brown high seat stroller. It was said to be a multi-terrain off-road vehicle. It could easily handle complex terrain. She also bought a round bed, which was very beautiful. With all the cute designs, it could make all mothers want to have a few more babies. There were also car bassinet, child car seat, baby bottles, diapers, milk powder... She studied all of them carefully. 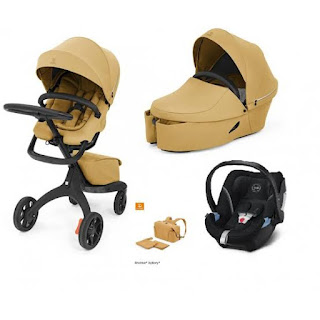 After the child was born, it would more difficult to care for the baby at home even with a few babysitters than work, which made Jiang Yu tangled for a while.
Seeing Jiang Yu in this state, Gu Shenliu shook his head: "The child hasn't come out yet, but you are already so troubled. Everything will be fine!"
Does he still have a place in this family? A certain Old Gu had already felt an unprecedented sense of crisis!
"You don't understand, I'm wondering what kind of milk powder the baby should drink! Australian or British, Japanese or Hong Kong... and baby bottles, glass or silicone, should we buy baby pacifiers? Chews? Or don't buy it? Which brand of diapers should we use? It seems that every brand of diapers has bad reviews!"
Gu Shenliu saw that it was no way for Jiang Yu to go on like this, so he directly asked his mother to introduce a few young ladies in the circle with good taste to Jiang Yu. All of these ladies were also mothers that just came out from the novice period. They would be very good in relieving Jiang Yu's anxiety, they could also give Jiang Yu some advice.
Sure enough, these mothers were really useful. These mothers loved to get together and talk about which brand of things their children use. As soon as Jiang Yu joined the mother group in the community, the mothers pulled her and said the advantages and disadvantages of each brand the found. They also introduced a lot of useful things to Jiang Yu, so she finally grasped the direction.

Moreover, these mothers were all wealthy ladies. They bought a lot of brand-name baby clothes that were only used a few times because babies grew very fast. They clamored to give them to Jiang Yu, but considering that Jiang Yu was a designer and had a good aesthetics, they all said: "If you don't mind, I'll give some to you..."
Jiang Yu smiled, "Of course I don't mind! Even if I have some already, you can still give me more. I bought a lot of baby clothes before, but even after washing, they are still hard. I heard that old clothes are softer."
When the mothers saw that Jiang Yu was good-natured and easy to talk, they started to talk again, and soon regarded Jiang Yu as their sister.
Since then, they went to Jiang Yu for afternoon tea every day.
…
After drinking the afternoon tea, Jiang Yu realized that these women looked like rich wives and housewives. In fact, the chat content was not entirely about children, and sometimes they would say about whose business had made several hundred million profit again, which stock had topped the daily limit again. These mothers that also had a business earning several hundred million have made Jiang Yu realize that afternoon tea was also a good place to socialize.
Jiang Yu just returned home that day, and when she opened her Weibo, she saw many netizens mentioned her. Jiang Yu knew it well, and when she clicked on it, it turned out that Zhuo Yi had posted on Weibo.
[#Jiang Yu’s Pregnancy# Breaking news! Gu Shenliu and Jiang Yu went to a private hospital together! This hospital is the obstetrics and gynecology hospital that celebrities love to go to. Many actresses did their confinement there, and this hospital is considered one of the best hospital. The price of the cheapest confinement suite is 128,888 yuan! It can be called a local tyrant and it is the favorite of female stars. It is said that Wang Tianhou gave birth there and spent nearly one million in a month! It seems that Gu Shenliu wants to make his wife safe after the birth! Zhuo Yi found out that Jiang Yu has been pregnant for more than 3 months!]
The accompanying picture was a photo of Jiang Yu and Gu Shenliu going to the hospital for an obstetric examination.
——Wow! Is this real? Is Little Gu really here?
——The genes of these two people are simply amazing! The child will be very strong!
——Really pregnant? More than 3 months and still can't see the belly? Then why is my belly protruding even before 3 months?
——Jiang Yu is really not fat at all, but her belly is indeed a little more protruding than before!
——JY is changing models recently, it turns out that Jiang Yu is pregnant! No wonder!
——She looks the same as before. I quite like Jiang Yu’s character, she doesn’t make herself sloppy because of pregnancy, she still looks beautiful.
——My God! Really pregnant? Congratulations to Jiang Liu CP! @Gu Shenliu @Stylist Jiang Yu
As a result, Jiang Yu's Weibo was almost crowded by netizens, and the whole screen was full of congratulations!