After watching the app, Bei Xiaoxiao asked Jiang Yu: "Taro Ball, what would you name this app?"
"Meng Cheng!" Jiang Yu said. (TN: 萌橙 / Méng chéng, literally means cute orange)
"Cute orange?" Bei Xiaoxiao thought for a moment: "The name is easy to remember and it's cute. In this case, the app icon should be a cute Q-version orange!"
"Well, I'm not very satisfied with the one I designed before, I have already called it back and redo it!"
Before, the team proposed a lot of names such as Little Sweet Potato, Sweet Orange, Love Things Sharing, etc. but all of them were rejected by her. In the end, Meng Cheng was set. There was no special idea, she just thought this name was easier to remember and has the potential of being red. She had been in business for a long time and still had a little feudal thinking, sometimes she believed in her intuition. She thought the name was right and insisted on using it. Even if some people say that this name is not like the name of a sharing shopping app but like an app for taking pictures and group buying.
"Brilliant!" Bei Xiaoxiao gave Jiang Yu a thumbs up, "Speaking of which, you are a pregnant woman, how could you toss around so many careers in your hands? Aren’t you too busy?"
Jiang Yu thought for a moment. JY's Taobao store and Tmall were run by special staffs, and there were also corresponding managers. These people were more professional and more experienced than her. She didn't need to be busy with ordinary things except for designing and finding fabrics! That's right, finding fabrics was a headache for JY. Although JY was bound to the industry's fabric intermediaries and could easily get advanced fabrics from all over the world, but sometimes the fabrics needed for clothes designed by Jiang Yu were unavailable. It took a lot of work to check the materials from abroad as she needed to travel by air or by sea. Therefore, when Jiang Yu was not free, she would ask people to go to foreign fabric market to help her choose materials and then she would watch and command through videos. These people would then buy the materials on behalf of her.
Recently, there was a high-end fabric exhibition in Hong Kong, and Jiang Yu also asked people from the company to participate. As for design, it's her old job. After handing over JY's photo shoot, her job was much easier.
And Jado, after they managed to recruit Alex, the marketing specialist from LV, he had pushed Jado to foreign markets. The promotion department had formulated a series of promotion plans. Just like the method of looking for Internet celebrities to promote on the Chinese Internet, they had found a lot of well-known instagram and youtube bloggers in various countries to promote Jado's bags, making Jado popular all over the world now. It had become a brand promoted by many people through Internet celebrities. In the marketing plan that Alex gave Jado, the next promotion plan also had TV advertisements, outdoor advertisements, online soft articles and other promotion methods, which give Jiang Yu confidence that in the next five years, Jado would become an international light luxury brand, open stores all over the world, and let the company go public.
Jado's operation was more formal than JY's, but because Jia Xing was not in China, the brand needed her to worry more.
As for Huajianji, several items of Huajianji had been well received, especially the initially launched beauty cream that made Japanese girls go crazy. Many people found it strange to know that beauty cream was the only China's domestic cosmetics that was popular abroad. Jiang Yu was only responsible for investment and promotion in Huajianji, while the management was left to Jian Si. Since Jian Si could open Kafan all over the country and expanded Kafan stores to 40, this job would be a trifle for her.

Jiang Yu Office.
"President Jiang." Zhong Xiaoping walked in, knocked on the door and said, "An artist has come to borrow clothes again!"
"Oh?" Jiang Yu raised her eyes and glanced, "Who is it?"
Zhong Xiaoping said: "It's Sun Chenxi, she's a third-tier star. She's always been tepid, but recently, her popularity has increased by appearing on variety shows, but according to what you said, we can't just lend clothes, we need to investigate the popularity and image of the artist, so I am not sure how to procceed. This Sun Chenxi not only wanted to borrow JY's haute couture, but also 30 sets of JY's Taobao store clothes."
The clothes in the Taobao store were not worth much. There was a third-tier star who promoted the online store was a kind of affirmation to JY anyway. Speaking of which, more and more artists like to wear JY apparel to appear on shows. Some talent show singers, variety show artists, and 18-line internet celebrities all wore JY when they appear on a show. After all, JY was not expensive but still has a great sense of design. In addition, it was the same brand as JY's haute couture brand, and it came from a well known designer, which made JY an online brand that had its own style, and it had become the most popular designer brand.
Jiang Yu recalled this star in her mind. Thanks to her good memory, she remembered that although the actress was tepid, she often took photos for magazines because of her long legs and a good temperament. She was not particularly beautiful, but her temperament was against the sky, which made people unable to ignore her. But because her temperament was so strong, she became too limited in casting, so she had not been popular so far. "Which dress does she want to borrow?"
"She wants to borrow one of the clothes from the previous opening show. That dress is worth more than 2 million! It's not a small amount. If she made dirty..." Zhong Xiaoping really felt a pain in the flesh. No matter how well protected a star was, the clothes would be worn outside. It was also easy to leave cosmetics and perfume smells on clothes, not to mention sweat. Clothes that were not well protected would be difficult to sell again. Therefore, even if celebrities wear clothes to endorse the brand, it couldn't be done casually.
Furthermore, borrowing clothes also depended on the other party's strength, and therefore, this was mainly what Zhong Xiaoping meant to ask Jiang Yu today.
Jiang Yu said in a deep voice: "Although the other party is only a third-tier star and is not particularly popular, but this girl has a good temperament and looks very good in many styles of clothes, so let's go! You talk to her again, if she is willing to change the dress, JY can lend her one."
"Change?"
"Yeah! She doesn't fit that dress." Jiang Yu said with confidence.
Zhong Xiaoping was stunned for a moment, then nodded: "Okay! I'll tell her right away."
Jiang Yu couldn't help but fall into contemplation while holding the mouse. JY had lent a total of 3 clothes before, but the other party was best actresses, people born with fashion cells.
Soon, Zhong Xiaoping replied: "President Jiang, Sun Chenxi is willing to change and asked you to help her make the look! She is really treacherous! She must have known that you are expensive, doesn't this mean that she wanted you to directly help her with styling on top of lending the dress?"
Jiang Yu laughed, but didn't mind too much, and said directly: "Give her the black halter neck and trousers! She needs it."
A few days later, Sun Chenxi wore clothes Jiang Yu gave to attend the opening ceremony of a fashion dinner. During the red carpet, all the cameras were aimed at her. It could be said that the black halter top outlined Sun Chenxi's figure very well, made her proud chest almost fall out and her waist looked even more slender. Sun Chenxi's figure was indeed very good, her legs were not only long and straight, but her hips were also very upturned. The trousers really accentuated this. 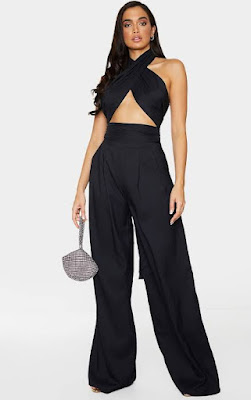 It could be said that this dress made Sun Chenxi stand out! She had also been praised by fashion magazines for her good taste!
All the magazines made the headlines, and Sun Chenxi overtook the first sister to become the most talked about actress on the red carpet.
Sun Chenxi was so excited, this kind of hot discussion, coupled with her own efforts, the topic was even higher than that of a super second-tier actress, because of this, many fashion shows recently invited her, and TV dramas asked her to play an important fashion editor role, many brands also invited her to watch brand shows, which made her famous for a while.
Sun Chenxi knew that this was all due to Jiang Yu, so she called and thanked her.
The two of speak kind words, and they could be regarded as friends.
Sun Chenxi's clothes were chosen by Jiang Yu. After the news spread, the first brothers and sisters in the entertainment industry were inexplicably attracted. They also dressed up with all their strength, but who knew where they would go. At one moment, no one even paid any attention them, but Sun Chenxi was different. Although Sun Chenxi's dress showed her figure and curves fully, it was also graceful. It gave people the feeling of a foreign film festival. It was casual and not too busy. They were also fashionable and gimmicky, making everyone fooled.
More and more people were looking for Jiang Yu's styling! More and more people were beginning to regard JY as their own styling studio. Many actresses were scheduled to participate in major fashion weeks and just the high-end clothing needed major film festivals would be overwhelming.
However, everyone wanted to crush others, so who would be crushed in the end? For a time, Jiang Yu was really distressed.
Speaking of which, Jiang Yu seldom saw Gu Shenliu recently. Every meeting was in a hurry.
Jiang Yu felt bored alone, so she went to chat with the mother group in the community, and went home to accompany Mother Gu when she had nothing to do, or played with chubby Xiao Q. When she had time, she would play matchmaker or something, and her days were full.
...
By the end of October, the official Weibo and WeChat accounts of the app had been preemptively registered, and the press release had also been prepared. With the help of Gu Shenliu, the media resources was fully in the hands of Jiang Yu.
Through competitive research, the company compared several apps of the same type, found the shortcomings of their app and eliminated them. After that, the company optimized the user experience for Apple and Android app stores so that netizens could download the app better and easily. The company had also negotiated with the two parties, so both mobile phones and tablets versions were developed at the same time.
With everything in place, Jiang Yu was ready to promote Meng Cheng's app on the market!