Gu Shenliu's repost pushed this matter to a climax. Many netizens said that Gu Shenliu had found a good wife. As soon as the news of Jiang Yu was made public, the Gu family's stock went up to the daily limit. Before, many people thought that Jiang Yu was climbing high, but this time it's a slap in the face.
That night, an internet celebrity asked a question in Zhihu*: "What kind of experience it is to have a fashion designer wife!" She mentioned Gu Shenliu, and Gu Shenliu actually responded! (TN: Chinese question-and-answer website where questions are created, answered, edited and organized by the community of its users.)
In fact, in today's Zhihu, it's not that there are no celebrities playing, many people responded, but most of the responses were just for some basic questions, such as how long it would take to shoot the TV series, how long would the movie take? The question of whether the director is more important or the screenwriter is more important during the filming, etc.
The reason why Gu Shenliu had a Zhihu account was because before he knew Jiang Yu, he answered a question from a Zhihu netizen. At that time, the netizen asked how they view commercial films. Gu Shenliu answered the question very seriously and caused heated discussions. Many netizens praised his three views, saying that he was the most positive movie star in the circle!
But today, Gu Shenliu returned to the question and properly exposed his private life. Since Jiang Yu and Gu Shenliu exposed their relationship, they had not given any interviews, nor had they disclosed anything about their relationship and private life in public. Fans were very curious about how they were getting along with each other. Now that Gu Shenliu had answered this question, wouldn’t it mean that he was okay to open his private life?
Therefore, netizens were so excited and poured into Zhihu. At this moment, Zhihu almost collapsed, and the server was almost hijacked by aliens, almost like the Jinjiang server!
Ji Xiaoqiu, a small fan of Jiang Yu, also entered Zhihu after receiving the news. She excitedly opened a question and answer, and saw Gu Shenliu answer like this:
[Thank you, what kind of experience it is to have a fashion designer wife? I think no one is more qualified to answer this question than me.
My fiancee Jiang Yu is a fashion designer. Although she is young, she is very talented in design.
An average girl feels that it is common to have no clothes in the closet, and she is also worried about what to wear every day, same as everyone! Her daily life is not only to decide what to wear today, but also to match it carefully. Every day's clothing match seems to be a battle for her. Maybe she is imagining that her clothes today can PK out of Paris Fashion Week. Maybe she thinks that her outfit today may lead a new trend, so in short, she takes every day's dress very seriously. As shown in the picture, this is her wardrobe. There are no less than 4,000 pieces of clothes in her wardrobe now. These clothes can only stay in this cloakroom for one season. After 3 months, these clothes will be changed. She would design new clothes herself, or buy new things.
Ordinary girls may take photos of their own clothes in their daily life, but she takes pictures of herself, do street shots, and occasionally asks me to take pictures of her. As a result, when I asked her to go on vacation to Maldives, her first reaction was to bring the clothes to be photographed for the next launch. I also had to read Taobao magazines and learn how to photograph women's clothes for Taobao. Besides that, I even had to help her carry two large suitcases of clothes and still need to help her take matching pictures along the way.
Because she has been holding sketch pen for a long time, she has severe tenosynovitis and pain in her wrist. So it is a must to prepare a medicine bag for hot compress at home. She will draw and write down inspiration at any time. Sometimes her talent is admiring, and the way she glows when she has new inspiration is really charming.
By the way, many things can also be her inspiration. Her designs are by no means limited to herself. As her fiancé, she has prepared all of my clothes. She pays more attention to the color of my tie than to me, and to clothes matching more than my three meals a day. She has more taste than other girl.
Also, she is very self-reliant and often makes achievements. Her fans even call her husband!]
As soon as the answer came out, netizens almost exploded with laughter! Especially when Gu Shenliu said he need to learn a lot of Taobao photos for Jiang Yu, everyone could even make up the picture. It was not easy for a person with a high level to lower his level to take Taobao photos! And one last word, the fans calling Jiang Yu Husband or something! Was this the real husband being jealous?
——Haha, so cute!
——Wow! Is that Jiang Ya's wardrobe? Sh*t, so big! Looks like a villa! So, this was decorated by Gu Shenliu? How can it be so shocking? Simply better than what I dreamed of!
——Blown out by the wardrobe! Sh*t, lhis is the real wife-loving maniac!
——The wardrobe is beautiful! Impeccably perfect! There are just so many clothes, so is Gu Shenliu really not exaggerating? How does Jiang Yu choose clothes when she goes out every day? Just looking for a piece of clothing need to go up and down the stairs?
——Our Jiang's clothes are so beautiful! As expected of a designer! As expected of Gu Shenliu's woman!
——@Jiang Yu come and see, your husband is doing bad things behind your back!

When Jiang Yu saw this Zhihu answer, she laughed for a long time. She really didn't expect Gu Shenliu to answer this question. After all, Gu Shenliu didn't seem like someone who could play Zhihu at all. This kind of contrast was cute!
Jiang Yu registered a Zhihu account and replied, "Mr. Gu, who said that I pay more attention to clothes matching than you?"
When netizens saw this answer, they ridiculed one after another, and said that the pair abused dogs every day! Moreover, their method of abusing dogs was different from others. Unlike those celebrities who pose at every turn and even post some staged pictures. In comparison, Jiang Liu's CP was really unusual!
In this matter, some netizens deliberately picked things up, and actually invited Jiang Yu to answer a question: "My husband is an actor, what kind of experience is it?"
This question and answer, at first glance, was specially designed for Jiang Yu, so everyone laughed and laughed. What were you going to do? After the husband answered the wife's answer, this was the rhythm to set the ring!
Although Jiang Yu seemed to be easy-going, she never liked to be troubled. This kind of question, it was definitely impossible to really answer it!
Everyone thought so, but who knew, Jiang Yu not only answered, but also answered very seriously:
[Thank you for the invitation, my husband is an actor, what kind of experience is it, no one knows better than me, right?
First of all, we seldom go to public places, because he is too conspicuous and everyone knows him, especially in a place like a movie theater. Therefore, when his new movie <Song to Qin> was released, we did not go to see it together. He also said he never watched himself act for fear of embarrassment.
Frankly speaking, I was taken care of by him a lot, especially in terms of acting. When I was filming the online drama <The Entertainment Circle of Chong Fei>, I didn't know how to act at all. Fortunately, he always took me with him. His acting skills were very good, so I was able to force myself into it. In the end, I had to bite the bullet and finished filming. It was a great feeling to play with him. I looked up and tried to chase, but I knew that I would never reach his level. Fortunately, my interest is not only on entertainment industry.
He has a lot of fans, and they love him very much. Some fans often mention me and tell me to be nice to him. They send a lot of gifts, but Gu Shenliu refuses to receive things that are too expensive. In the end, they only bring back a lot of handmade cookies, fruits, and sweets. I gained 3 pounds without realizing it! This is simply intolerable! Therefore, it is not very good that my husband is an actor.
He loves fitness and is also diligent in body maintenance. Therefore, I can exercise with him from time to time, swim with him, or try new skin care products on his face. I will tell you secretly that I even had him try on my lipstick! Ha, an average man wouldn't be so generous, right?
I see his movies on TV every now and then, and occasionally I feel that he is very strange. Him on the TV is handsome and domineering, which is different from the man who is sitting quietly on the sofa reading a book besides me. I wonder if I have picked the wrong script.
It is intolerable to see someone hacking him on the Internet.]
Reply: 2.3K
——Taro Ball, can you give me a dozen of such a man?
——Why didn't you acknowledge that your husband is handsome?!
——The way you two abuse dogs is a bit strange, please don’t develop such a strange hobby in Zhihu! Otherwise, I'm afraid I won't be able to see you on Weibo!
...
Many people were discussing their answers to Zhihu. Jiang Yu simply turned off the screen, packed up and went to <Women's Wear> to do the interview.
Before leaving, Jiang Yu thought about it and posted a grass-planting Weibo: 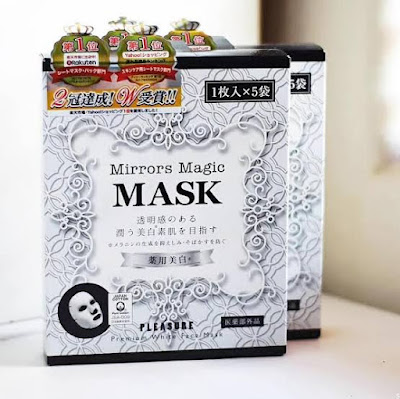 [Recently, many people have asked me what kind of mask is good to use. Japan's Mirrors Magic Mask is legendary. This mask is mainly used as a whitening mask, it is to help with freckles, acne, and also moisturizing. It is very comfortable to use, so I recommend it to everyone! When the seasons change at the end of summer, it is even more necessary to protect the skin, because after the ultraviolet rays in the summer, the skin will become fragile and sensitive. This is why many people are prone to allergies when the seasons change, but moisturizing will reduce many skin problems.
I also like to use this mask, mainly because the ingredients are safe, and the mask only needed to be applied around ten minutes on the face.]
Arriving at the filming location of <Women's Wear>, Jiang Yu just walked in and saw Jiang Shan walking over with excitement.