The Tobacco Cloth series was a new concept. The clothes on these models had little practical value and were more of a concept propaganda. Various shapes of fabric were stacked one after another. These fabric were different from ordinary clothes. Held up high, made into various shapes, dyed in various colors, at first glance, it looked like misty smoke.
For example, there was a tube top skirt made with dyed Tobacco Cloth. This skirt was dyed into ombre lavender. These lavenders were like purple smoke floating in the air, and also like nebulae hanging in the night sky. It was very ethereal. The changing lights on the scene made the clothes seem to be moving and full of mobility. 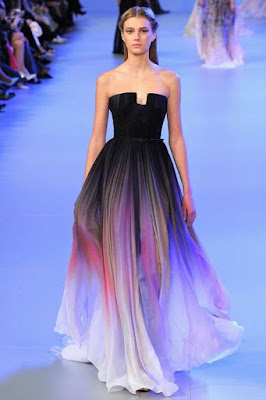 This kind of clothing had both appearance, design, and concept, so that the cameramen on the scene took pictures one after another. The people watching the big show in the circle also fixed their eyes on the stage, with obvious surprise on their faces.
The reason why many of them come here was just because Jiang Yu was the designer of the First Lady of the country, so they did not have much hope when they came. They thought that this show would be the same as many shows in China where most designs looked outdated and even low in concept. Who would have known that Jiang Yu took the opening show so seriously, her design and professionalism of its clothing even surpassed the haute couture show at Paris Fashion Week!
For a time, many people took pictures and posted about the show to their circle of friends. Coco couldn't help but get excited. Her emotions changed from being indifferent at the beginning to being proud of watching the show now. Coco could imagine that this big show was bound be written in history and would be mentioned in many magazines. There would be no other content in tomorrow’s headlines. Between the dazzling international supermodels, as well as those clothing with high taste and advanced ideas, there was a lot of content that could be written. Everyone watching the show under the stage all had an extraordinary identity, and any one written was enough for the length of a page.
"Editor-in-chief!" Coco said excitedly: "It's even more exciting than the shows of the four major fashion weeks. Those big brands have been going back and forth concept-wise over the past few years. There are no bright spots anymore. Jiang Yu's show today makes people feel refreshing."
"It's not bad!" Jiang Shan was almost unable to hide her emotions while speaking. Many people couldn't realize that what they were witnessing was a change in an era. Today's show marked the arrival of an era. This was the era of Jiang Yu!
Unlike other fashion week shows, there were four different collections in today's "Floating Life like a Dream" show.
After the two concept in the beginning, there was the main couture show, which was divided into two parts, Chinese and foreign, both ancient and modern. Because Jiang Yu was very obsessed with traditional and modern fashion, and did not intend to give up any of them, when she designed her store, she thought about it and divided the store into two parts. The left was the East Palace, the right was the West Palace. The East Palace was ancient China. There were traditional costumes with styles similar to those in the trailer video, and there were also specially customized red wedding costumes. The West Palace was an ordinary modern dress customization.
As for the reason for making traditional clothing, Jiang Yu had her own considerations. The new generation of designers, many of them had given up on tradition. Their designs were deeply influenced by Western culture. Nowadays, many local designs had no difference with foreign designers. However, China had more than 5,000-year-old tradition. If Chinese traditions were abandoned, from where would their descendants got to know how their ancestors lived?

Jiang Yu hoped to carry forward the traditional clothing culture within the scope of her ability. And the reason for making wedding dresses was because designers like Vera Wang could also open special wedding dress shops. Red wedding dresses were Chinese true traditions. If done well, it would look better than a modern wedding dress. Nowadays, many young people pursued retro and liked antique weddings, but it was still difficult for them to find special dresses. Vera Wang's customized wedding dresses sell for hundreds of thousands of pieces but Chinese traditional wedding dresses could not be recognized? In fact, the making process of the traditional one was much more complicated.
Jiang Yu hoped to pass on a concept to everyone, her studio could customize traditional wedding dresses!
Suddenly, applause came, everyone stood up and looked at the stage with excitement. The show was over! Although the four series were different, they all fit the theme of Floating Life like a Dream.
…
When the stage lights came on, Jiang Yu walked out wearing the clothes she designed. She followed the model's and greeted everyone with a smile.
"It's so strange, the designer's own clothes are so beautiful! It's more conspicuous than the models' clothes!"
"Yeah! I underestimated this little girl! She can hold such a big show at a young age! It's really a character!"
"The dress she is wearing today is very beautiful. I don't know if it is from the store, I want to order a few."
"Yeah! The smoky gray mid-length suit is just the right length. The fabric looks soft, there are no buttons, and the waistband is slanted. The simple V-neck and the details of water ripples make this dress spoke 'high-end' everywhere. She also has long skinny legs, so she looks good in trousers. A gray top hat and her hair loosely swept aside, makes her whole person scream capable. It is very suitable for the needs of today's occasion."
"Not bad! This dress is very suitable for her identity. You must know that today she is both a designer and a boss. If she wears a skirt, it will look a little too ordinary. It is just right to wear it like this!"
"My employers all want this dress, so I may order 3 of them later!" It was a fashion buyer who spoke.
"Then I also ask, this dress is very suitable for high society to wear."
For a while, the discussion started on the spot. Jiang Yu just came to the end, the entertainment guests she invited came on stage, she smiled and took a photo with them.
Dozens of media outlets all gathered around.
With thunderous applause, Jiang Yu walked up to the stage with a smile under everyone's attention. In the crowd, she saw a familiar figure. He was standing at the door, a smoky gray suit complimented his tall and stiff figure, and his hair was casually combed to one side. The drooping also made him look unruly. This kind of Gu Shenliu looked different from his usual orthodox suits, he seemed to be younger and had a more dashing temperament.
The two looked at each other and countless undercurrents turned around in their eyes.
The distance was too far, they couldn't even see each other's eyes. But just looking at each other from a distance, they saw the emotions from each other. Jiang Yu still remembered many years later, no matter how difficult it was, how much confusion, there was always someone waiting for her at the end of the road. He told her with his eyes that there was nothing to be afraid of.
Because the show was set up in the store, after the opening and overhaul, everyone could walk around and check out the store. Everyone was more and more shocked, because Jiang Yu's haute couture products greatly exceeded their expectations.
"This tube top skirt is good, the upper body is a black and the lower body is white gauze. The branch pattern printed on the waist extends all the way down, and they are dotted with three-dimensional pink plum blossoms. It has a Chinese flavor and is very fashionable! This dress is perfect for a red carpet! I'm going to buy one"
"Yeah, this red wedding dress is also good! I'm going to wear this for my wedding next year, so I'll buy one too!"
Wow! For this kind of clothes to be designed by a Chinese designer was unscientific!
Everyone was amazed at the design ability of Jiang Yu.
Some people even say that Jiang Yu was about to master Chinese fashion.
…

At the same time, Bei Xiaoxiao and a few others listened excitedly in the corner. Everyone was very impressed with today's show. They were also very excited when they saw it. A high-end atmosphere? This is it!
Jiang Yu was busy, so Bei Xiaoxiao didn't dare to disturb her. She just took pictures of the scene and posted them online.
[@Stylist Jiang Yu Haute Couture store opening show! All I can say is, I give full marks to such a design! Kneeling and licking!]
——Wow, so awesome! Taro ball is getting better and better.
——The designer of the First Lady of the country is not a vegetarian!
——Is it really open? I heard that it is more than 2000 square meters? The investment should be at least one or two million, right?
——OMG! A lot of big guys came! Actors, actresses, editors-in-chief, buyers, celebrities... even more lively than the red carpet of a film festival! Jiang Yu is so good! Some people are notoriously difficult to invite anywhere, but they all go!
——The one upstairs is too naive. Although Jiang Yu is not particularly famous, she is the First Lady of the country’s designer, just like the driver who drives for the President. Although he is a driver, the meaning is very different. Also, Jiang Yu’s own reputation is not to be underestimated. The Gu family is her future husband's family, with the support of the Gu family, the people in the circle should give some face!
——Hey, I seem to have seen the Gu family, they all went, it seems to support Jiang Yu.
——Awesome, my taro ball! Is it really open? Thinking about how many people sang badly when Jiang Yu was promoting this store, I didn't expect it to actually open!
——I watched the live broadcast, you can go and watch it, the opening show is really awesome!
——Really? I'm going to watch the live broadcast too!
After the opening show, everyone seemed to be very interested in the dresses in the store, and many celebrities even placed orders on the spot.
"This is so pretty, wrap it up for me!"
"I want these heels and that dress!"
"Wrap all the dresses on this floor for me!"
"I want it all!"
The shopping guide said weakly: "Sorry, all the clothes in our store are sold out. If you want, we can customize for you, and we will send them to your home when it's done!"
"All sold out?" This sentence caused a thousand waves at the scene like an explosion.