The photo was just as Jiang Yu imagined. It was normal and casual. In the warm early autumn sunlight, her and Gu Shenliu’s faces were bathed in the sunlight. They didn't say any nasty love words, but the smiles on their faces were real. Gu Shenliu looked at her eyes, focused and pampered. The gentleness shown by a man with restrained emotions was like poison, it was irresistible.
Jiang Yu just looked at this photo and knew that she didn't need to worry about her future life, no matter what happened in the future, at least at this moment, Gu Shenliu's love for her was real.
"Wow!" Bei Xiaoxiao's voice suddenly came, and she pointed at the screen and exclaimed: "Taro Ball, this photo... You tell me, this is a pre-wedding photo, right?"
Jiang Yu got up with a smile and poured herself a glass of water: "Yes!"
"Sh*t! Why didn't you tell me? No, this scene looks familiar to me. This basketball court, library, playground... Isn't this our school? You went to our school to take pre-wedding photo?" Bei Xiaoxiao Eyeballs fell out of shock.
"Well, it was taken yesterday. The photo was not edited very much, so Durres produced the picture very quickly."
"You're so mean!" Bei Xiaoxiao snorted: "You don't even tell me when you take pictures, I can follow you and carry your shoes!"
"I don't want too many people as it will cause onlookers and it will affect everyone's life." Jiang Yu explained with a smile.
"Okay! I'll let you go this time!" Bei Xiaoxiao sat in front of the computer and clicked the photos one by one. "My God! This photo... If it's released, fans will explode! Although it's not the kind of rigid pre-wedding photo, nor is it a photo taken in Paris or Maldives that cost huge sums of money, but it just feels so heartwarming. I really like the feeling that you two don't really care about formality."
"It's not that I don't pay attention, it's just that I take too many photos on daily basis so I don't want the hassle. When it comes to marriage, everything is based on my own comfort. If I am too tired and unhappy when I get married, it will lose the meaning, that's not what I want."
"Oh! I look at Gu Shenliu’s eyes, even a fool can see that he loves you! Oh my God! There is this one!" Bei Xiaoxiao stared at a photo for a while, her saliva flowed down, she said excitedly, "Taro ball, no way, I want a copy of this photo!"
Jiang Yu knew that she was Gu Shenliu's brainless fan, so she nodded and smiled: "Aren't you afraid I'll be jealous?"
"Humph! You will be too embarrassing if you get jealous! The male god is yours from start to finish, but I can't even drool at the photos?"
"Okay, I reluctantly let you!" Jiang Yu smiled and sent the photo to Bei Xiaoxiao's mobile phone.
Bei Xiaoxiao's eyes prayed, "Taro Ball, can I post this photo online?"
"Post it! Post it you dare!" Jiang Yu laughed and said again, "Don't you just want to play a more important role in Gu Shenliu's support club? Let fans know that you can get private photos, okay? Satisfy your ego."
"Hehe." Bei Xiaoxiao smirked: "You don't understand if you don't belong to the circle. We are all sharing resources. My idol became my brother-in-law and I see many private photos my mobile phone every day, but I can't post any of them. Going out and showing off is really great! I also want to send a photo to give back to other fans!"
"Okay, let's post it! I originally planned to post it anyway."
Bei Xiaoxiao got the order, and immediately edited Weibo:
[@Gu Shenliu Global Fan Support Club @Gu Shenliu Fan Club @Gu Shenliu Shencheng Fans, it's time for me to hand in my homework! My private photos of Brother Gu are pre-wedding photos! I don't know what you think, anyway, I have the urge to commit a crime!]
The accompanying picture was the photo given by Jiang Yu. 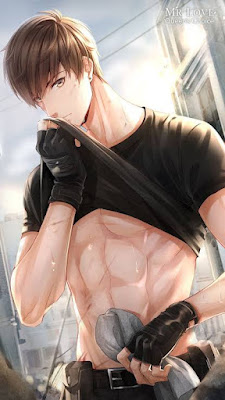 As soon as this photo was released, it caused an uproar. Although Bei Xiaoxiao only had 3,000 followers on Weibo, most of them were also fans of Gu Shenliu. From Bei Xiaoxiao's daily life, fans already guessed that she was Jiang Yu's friend and was working in JY studio, so they all paid attention to Bei Xiaoxiao. Although Bei Xiaoxiao never posted pictures of Gu Shenliu, they could often speculate from her few words that Jiang Yu and Gu Shenliu were very happy.
For example, sometimes Bei Xiaoxiao will send:
[As soon as the little sister got off work, someone came to pick it up! Real filial piety! A good man who is absolutely in harmony with his words and deeds!]
[Some celebrities are too different before and after. Fortunately, someone is not like this. The character in reality is better than on the screen.]
[Never regret being your fan.]
[Seeing that you and my best friend are happy together, I am satisfied!]
Therefore, as soon as Bei Xiaoxiao posted the photo, her followers exploded first. And then the official blog of the support club also paid attention to this and immediately forwarded Bei Xiaoxiao's Weibo.
[Such a good figure! It's normal to have the urge to commit a crime! Lick the screen!]
Fans also left messages.
——Isn't this my idol? Such perfect abs...
——This complexion makes me want to take off my clothes! So perfect!
——Kneeling and licking! It's a pity that this body can only be enjoyed by Jiang Yu alone!
——Nosebleed, I really don't know what to say! OMG! Zhuang Xu's figure is so perfect! (TN: Zhuang Xu is Gu Shenliu’s character name on the web drama.)
——Why do I feel like I missed 100 million? If I had known that Zhuang Xu was in such a good shape, I will... I will buy more stickers to stick them on!
——Nosebleeds, nothing to say, I really want to commit a crime!
——Thanks for the contribution! It turns out that Brother take care of his body so well.
This photo was showing Gu Shenliu on the basketball court. At that time, he had just finished playing basketball. It was still very hot in the early autumn and this was captured by Durres.
Durres knew where the real charm of men was. Unlike other photographers who liked to take pictures of men posing deliberately, Durres didn’t photograph men in general. But once he did, it would be a classic. Such as this, under the sunlight, Gu Shenliu's abs were blocked by shadows, the lines were smooth, and there were beads of sweat rolling on the clear and firm six packs. Such charm was a lore for everyone seeing!
This kind of figure, even people who didn't exercise know, without more than five years of work out, it was impossible to develop such good muscles! In addition, it required extremely strong self-control. Gu Shenliu had such good muscles, but he seldom regarded this as a selling point. On the contrary, he usually wore very covering clothes when he went out.

It took less than an hour for Bei Xiaoxiao's Weibo to be spread all over. Because of the repost by Gu Shenliu's fan support club, the Weibo was quickly reposted by 20,000 more people, and most of them were Gu Shenliu's fans.
However, this Weibo also brought some work to Gu Shenliu's studio, because at the moment when Weibo was released, all the media called to inquire, and Gao Jing answered the call and gave a soft response. "Yes, it's a pre-wedding photo! They just don't wear normal wedding attire. When will it be sent to you? The draft will be sent soon!"
"Okay! It's definitely exclusive to you! Don't worry!"
"No, I didn't deliberately not inform you! We are all good friends. It will hurt our relations to say this. I will send you the photo right away."
Only then did Gao Jing know that Bei Xiaoxiao announced the pre-wedding photo of the two. Although there was only one photo, it was enough to cause an uproar on the Internet. Gu Shenliu's Weibo proposal at White Horse Manor previously had more than 2 million reposts, so it could be seen how much netizens pay attention to the two. Now that the pre-wedding photos were out, the wedding would be next. Not to mention fans, when melon eaters saw such seductive couple, they would want to take a few more glances.
"Shenliu, why didn't you tell me when you sent the photos to others?" Gao Jing complained.
Gu Shenliu didn't move and said in a deep voice, "Jiang Yu did it."
"Jiang Yu? Why don't you persuade her? This kind of thing must be well planned. When the pre-wedding photos should be released, how to tell the media, how to answer question about the wedding date, if she doesn't understand then you should understand! Why don't you remind her not to publish the photos so early?" Gao Jing went into a state of irritability again.
Gu Shenliu glanced at Gao Jing, then looked back: "I can't say such a thing."
"Why?" Gao Jing frowned.
"Strict family education." Gu Shenliu threw out three words.
"..."
…
Soon, #Gu Shenliu Jiang Yu Pre-wedding Photo# became a hot search.
Jiang Yu had long been accustomed to things like frequent hot searches. No matter how big things were in the entertainment industry, as long as she announced news, she would definitely crush others. Even compared with first-tier actresses, her topicality was not worse.
At the moment, Gu Shenliu posted a Weibo: "Pre-wedding photo without wedding dress, as long as the other person is you, everything is fine."

——I cried badly! I don't know why, but I just like you all very much. Seeing you treat Jiang Yu so well, I'm so jealous.
——I have followed you for ten years and I have loved you for ten years. Although when you first announced your marriage I was very dissatisfied with this Internet celebrity girlfriend, but later I found out that she was the First Lady of the country’s designer, and I was balanced. Jiang Yu has the ability and beauty, such a woman is right for you.
——Wow! Why didn't you lick that picture? But that's okay! I have set it as my computer desktop.
——So beautiful! I especially like you. I think this pre-wedding photo is very nice. You are like a couple who are living their life seriously. Such a life is not for others to see, but for yourself.
——Hey, there are very few couples in the entertainment industry who don’t use marriage as material to hype.
——There is no hype, I like the real you.
——This photo is so catchy, it’s like my college life, going around in classrooms, basketball courts, playgrounds, libraries… This series of photos by Jiang Yu and Gu Shenliu is like a little story, happening on campus, making people feel especially nostalgic.
——It's really beautiful, Jiang Yu's face and figure are also invincible! The two are a good match for each other! Abuse the dog! Hiks!
…
To say which group in this world was more enthusiastic and crazy than fans of Gu Shenliu and Jiang Yu? That must be a student of Shenda University!
Almost all the students of Shenda University regarded Gu Shenliu as their idol and role model, and many boys also regarded Jiang Yu as their dream lover. It could be said that the couple had always been loved by all. The pre-wedding photos were taken at Shenda, so the students of Shenda were even more explosive than the two respective fans, it was a blast!