At the same time, because of its good reputation, the box office of <Song to Qin> had been on the rise. Many people watched it three times to four times. As they thought it was good, they recommended it to friends, and friends recommended it to family members. Jiang Yu's circle of friends were full of news about the movie. It seemed to be out of date if someone didn’t watch <Song to Qin> when everyone were talking about it.
Gu Shenliu's image as Zhuang Xu was deeply rooted in the hearts of the people, because <The Entertainment Circle of Chong Fei> was well-made, almost no one thought that Gu Shenliu's web drama was a drop in price. At the time the movie was released, and Gu Shenliu used his own strength to perform a different performance as Ying Zheng. Ying Zheng's arrogance, Ying Zheng's ruthlessness, Ying Zheng's ambition, Ying Zheng's gentleness, and lastly, old Ying Zheng's confusion, were all deeply portrayed by him! Such an image and Zhuang Xu were simply two complete opposites. Such a contrast made everyone found it charming! For a while, the domineering and restrained Zhuang Xu and the bearded Uncle Ying Zheng, everyone couldn’t decide who was the cutest!
Moreover, Gu Shenliu's acting skills were simply textbook-like, and could be completely included in the history of Chinese film!
The success of the movie made Gu Shenliu the No. 1 hot search on Baidu and also led to the ratings of <The Entertainment Circle of Chong Fei>. At this time, Lan Xiaoxiao in the web drama had received female number one role, and the TV series she starred in was about to be broadcast on satellite TV. After the release, her relationship with Zhuang Xu had also reached a very tangled stage. It could be said that the recent plot was very attractive, and many viewers were complaining, saying that only 2 episodes a week was not enough!
The clothing in <The Entertainment Circle of Chong Fei> had become a model of clothing that everyone was trying to imitate, and it also indirectly made JY's Tmall sales hit a new high.
The employees of the company are all happy! First, the big promotion already made their wallet full of money, and then Huajianji was launched as well, so they earned another commission! Even when they were too lazy to make money, JY's sales kept rising.

When the JY staff chatted, they all said proudly: "Hey! I got another 3,000 commission today! If it goes on like this, I will be embarrassed."
…
At this moment, Jiang Yu's Weibo followers exceeded 50 million!
——Taro Ball! 50 million! What about the lottery!
——Taro Ball! Release the lottery quick, I'm waiting!
Of course Jian Si knew about the lottery on Jiang Yu Weibo, she said: "What are you going to use as a prize? Do you want Kafan to support you?"
"No!" Jiang Yu thought for a moment and then smiled: "I have already thought about the prize!"
"Um?"
"Have the first batch of finished products been made for our new Starry Sky Eyeshadow Eye Shadow Kit?" Jiang Yu asked.
Jian Si instantly understood what Jiang Yu meant. After thinking about it for a while, she secretly thought that Jiang Yu was really shrewd! Her abacus was not an ordinary one! In the past, Jiang Yu used to spend hundreds of thousands worth of products for lottery and everyone called her a fool behind her back. However, the number of reposts on her lottery Weibo was very high, and the number of Weibo followers increased by at least several million people. Think about it, how much economic benefits could these millions of people bring to her?
The new Starry Sky Eyeshadow Eye Shadow Kit this time also had the outer box and product shape designed by Jiang Yu. Jiang Yu did not spend a cent of money, and directly held a lottery to send out the kit, which was equivalent to doing pre-launch promotion product. Some people said that the cost was very high as they needed to send out so many kits, but Jian Si still smiled. Advertising fees were very expensive these days. Even on Taobao, there were many people who didn’t hesitate to burn tens of thousands for advertising fees a day! The last satellite TV advertisement or CCTV advertisement alone cost hundreds of thousands to tens of millions of yuan. But Jiang Yu's advertisement was different, she could double the money she sent out every time!
"It's done! If you want to send it, you can send it anytime!" Jian Si hooked her lips and smiled.
Jiang Yu pursed her lips and responded. She clicked on the Starry Sky Eyeshadow Eye Shadow Kit on the table. The outside of the kit was made of special plastic in the shape of white lace. It had a princess and aristocratic style. It was exquisite in workmanship and very beautiful! She could guarantee that most people wouldn’t be able to help themselves just by looking at the outer box, they didn't even have to try! As for the inside of the kit, she also used ingenuity. This Starry Sky Eyeshadow Eye Shadow Kit had many colors. She designed it based on the nebula she saw when she first watched the night sky with Gu Shenliu. The bright nebula inspired many different shades, they were erratic and dreamy. She used different shades of purple gradient to make a red eye shadow, which was suitable for everyone's daily makeup, and on the side, there were earthy color shades, like the universe that wrapped the nebula. 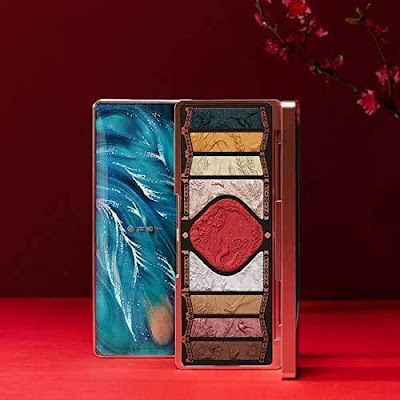 The beauty of this eye shadow kit was that almost any red eye shadow could be used as a blush! The earth tones could be used for contouring, and there were star-shaped pearly color on the side as well. Those could be directly used as highlights on the brow bone and nose. That was to say, this set of products included eye shadow, blush, contour, and highlight, it could save a lot of money for fans.
Even better, the price was only 159! Just imagine, 159 could buy such a large kit which looked good and had many functions, who wouldn't be happy? Furthermore, this kit had been tried by Jiang Yu many times. Recently, when she posted a selfie picture, netizens always asked her what eyeshadow she used, that was to say, the product worked very well! The powder was delicate but not easy to fallout, and it didn’t smudge or crease easily. It was very suitable for Asian skin.
"I want 1000 boxes!"
"Okay! I'll send it to you right away!" Jian Si said.
After, Jiang Yu directly posted on Weibo:
[Dear, many people have asked me what eyeshadow kit I used recently, and the reason why I haven't responded is because this product has not been released yet! As shown in Figure 1, this is The Starry Sky Eyeshadow Eye Shadow Kit launched by the cosmetics company I invested in, the packaging is designed by me! After 3 years of research and development, this makeup kit has a very good effect! If it is not good, I will not recommend it to everyone. Now, I will send 1000 boxes as lottery. The same old rules, repost the Weibo, mention three friends, and leave a message you want to say to Jiang Yu. I will pick the winners from there!]
——The local tyrant is here again! Hope to get one this time!
——Wow! The Starry Sky Eyeshadow Eye Shadow Kit packaging is so beautiful! So dreamy! Since when domestic brand can make such high-end makeup?
——Ah! I always feel that I am witnessing a change in an era. Will Jiang Yu change the status quo of our country's cosmetics industry?
——Yeah, we always use Japanese or Korean makeup and anti-aging products from Europe or the United States. What about our own country? Are there no good brands? If this product of Jiang Yu is really good, I am willing to support her and domestic products!
——Because of the good reputation of the beauty cream, I decided to buy a set! Err no, win a set!
——The beauty cream is really easy to use, although it is very expensive, I still bought the full size! Suffice to say, I threw away all my previous foundations and creams.
——I heard from many bloggers that the beauty cream is easy to use and I was really not disappointed when I bought it. I hope the Starry Sky Eyeshadow Eye Shadow Kit will not disappoint us as well.
Since it's a lottery, it went without saying the fighting power of 50 million fans was very strong! Therefore, when Jiang Yu refreshed her Weibo in an hour, she found that the lottery had reposted 100,000 times. It reached 300,000 that night, and she forced herself not to be surprised. Ha ha! She was someone who had seen the world!