At the same time, the official blog of @Young Designer Competition, which very few people follow on Weibo, suddenly flooded by a group of fans.
——Why is there no scene map?
——Ask the editor to broadcast live!
——No traffic, no TV, please live broadcast the beautiful photos of my Jiang Yu!
——Begging for live broadcast!
The editor was flattered, what was going on with these thousands of messages? He suddenly realized that this designer competition was different from the past. Because Jiang Yu and Bo Manrou were tearing each other apart at the beginning, the two attracted a large number of fans. In addition, Jiang Yu had its own fan flow and easily attract hot search. This hot search function had made this competition receive a lot of attention.
The editor hurriedly reported the matter to the superiors, and this phenomenon attracted the on-site directors of the competition to be more serious. Because they suddenly found out that the fashion channel that originally broadcasted fashion catwalks that no one watched, was likely to usher in the biggest counterattack in history.
The director not only instructed the people on the scene to do well, but also asked them to give Jiang Yu and Bo Manrou more shots.
At the same time, on the TV screen, Jiang Yu was standing on the spot making clothes. She was so beautiful, and people couldn't pick out any flaws in her figure. She wore a simple white shirt and tucked it into retro-style light blue high-waisted jeans, revealing her curvy appearance. The long legs and a pair of sneakers on her feet, made her look like a Hong Kong style retro beauty in the 1990s. Not only her clothes and temperament, but her face was like a pictorial girl of that era. Her makeup was exquisite, but not kitsch. She looked fashionable from head to toe but also not blindly cater to the trend. She wore simple and generous clothes, and didn't dress strangely. Her gestures were full of beauty.
The eyes of all fans started to bubble.
Oh! This woman is so beautiful! The ability is also very strong, and sometimes she is very offensive when speaking! Mom, I want to be her woman! Enter her harem!
Of course, Bo Manrou was also very interesting, after all, her aggressive beauty could not be ignored.

Right now, Jiang Yu seemed to be dissatisfied with the model's makeup. "Your makeup will look dark under the illumination of this white light, and the color of the blush is not right. Let's change it." After that, she just picked up the makeup brush and modify it for the model.
...
An hour later, all preparations were completed, and the backstage was busy. Each designer brought their own model, make up and stylist team, and tried to make everything perfect.
Because it would be shown on TV, Jiang Yu hoped that when her clothes were displayed, it would give people a perfect impression.
At this moment, Yan Qing came to the stage and gave the opening speech, and then she laughed: "Audience, let's welcome the work of the first designer!"
"What should I do, taro ball? I'm a little nervous!" Bei Xiaoxiao's design was the first to show.
In the design of the T-shaped catwalk, the models had already stood on both sides of the backstage opening. Jiang Yu smiled and said, "Don't worry! It will be smooth!"
The lights on the stage suddenly turned on, and the dazzling lights made the expressions of everyone in the audience a little unreal.
The models walked to the runway from both sides. They were divided into two teams, passing through the long catwalk, doing various movements, or simply walking to the other end without expression. Under the dynamic music, everyone was staring at these models.
The theme of Bei Xiaoxiao's design was "cocoon", which obviously means breaking the shackles of the cocoon and getting a new life. The design uses many strips of bandages to surround the body layer by layer, making the person seemed to be bound like a cocoon, and at the same time, it had a meaning. The dark color that represented being bound and the bright color that represented breaking the bound were well integrated into a set of clothes. People could feel the designer's thoughts just by looking at the clothes. 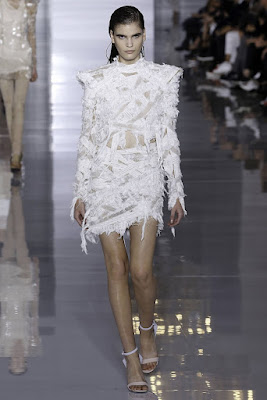 The whole design was remarkable.
Soon, the show was over, the designers were preparing for the show for several months but it only rook a few minutes to complete the show!
All the models returned to the base of the catwalk, posing for a photo, looking at the whole scene!
Then, Bei Xiaoxiao took the microphone and came up to the stage, explaining her intention to design this series: "The reason why I designed this series is because, in this society, everyone is bound by many invisible things, we want to break free, but also can't get rid of these bounds entirely. We can only compromise with the turbidity of dusty things in your own way..."
Jiang Yu stared at the stage and couldn't help applauding. For a long time, Bei Xiaoxiao stood beside her and she was very inconspicuous, but Jiang Yu knew that her best friend was also very talented. Seeing Bei Xiaoxiao shining on the stage, she was happy from the bottom of her heart.
The judges looked at each other and gave Bei Xiaoxiao a score.
Zhou Wenbo smiled: "It's not easy for undergraduates to design such a work, I couldn't help applauding Shenda Fashion Department! Obviously, you will definitely shine in the design world over time, but now, there are still some immature places in your design. However, the design does break the thinking comfortably, which attracts me to applaud you!"
Jiang Yu heard the words and couldn't help nodding. Zhou Wenbo was in his fifties and was the winner of the Golden Tripod Award. He was very famous in China. He was also a director of the China Fashion Design Association. This designer had also served as a judge for various competitions and had a great say in the fashion circle.
"What Old Zhou said is correct." Another judge named Li Yuanfeng smiled and said, "It's not easy for a little girl to get to this point at such a young age! It still needs some improvement and you still need someone's guidance to let your design took a new level. But I think this is already very good for your age! By the way, Shenda Fashion Department is getting a lot of attention recently, right?"
Li Yuanfeng was a professor and doctoral supervisor of a certain university. He often went to international exhibitions and was very famous.
Zhou Wenbo nodded: "I also heard about it. It is said that there is a famous little girl. I often read about it in the newspapers."
"Not bad! It is indeed a school where elites gather!"
These few comments made Shenda University students explode.
——Haha, what this few old men said makes sense! Our Shenda do indeed gather talents.
——Miss Bei Xiaoxiao's clothes are not bad, it's remarkable!
——Come on for Sister Bei! Looking forward to another outstanding Shenda University. I hope you can win the championship and win glory for the school!