Jiang Yu immediately posted on Weibo:
[My dears, the first magazine interview I accepted as a designer was dedicated to <Women's Wear> magazine. Today, the magazine with me as the cover will be on the shelves. I hope everyone will support it! Oh, ah!]
The pictures attached on the post were real photos of magazines sent by Jiang Shan.
——D*mn, this cover is so beautiful! Prosperous beauty! I am blessed just by seeing you.
——A face without flaws, no wonder Gu Shenliu chose you!
——Taro balls, you are so beautiful! Sexy and pure, sitting in a pile of flowers, I feel like I'm being teased by you.
——Is it an exclusive interview with <Women's Wear>? My Taro Ball is great.
——Taro Ball, I went to Shencheng to play today. I went to the JY Haute Couture store to see and it was really dreamy. You are my goal. I will study hard and try to get into a good university to be like you successful people.
——I'll go downstairs to reserve one. The last time with <Weiwei> I was too late.
——I'll go as well!
Almost instantly, there were tens of thousands of fans clamoring to buy the magazine. Jiang Yu smiled. The support rate seems to be much better than <Weiwei>.
At the same time, Gu Shenliu walked to the news stand at the entrance of the community.
It was still Uncle Feng, he saw Gu Shenliu, smiled, and asked: "Xiao Gu, what are you buying this time?"
"<Women's Wear>"
"I have some! I thought all of you men like to watch <Men's Wear>. This issue of <Women's Wear> is selling well. After stocking so many, there is only one copy left! It's strange!" Uncle Feng babbled.
Gu Shenliu's lips moved slightly, he paid the money, and took the magazine directly.
On the cover, Jiang Yu was pulling a silk bed sheet, the silk barely covered her front, revealing her clean back, which made people’s imagination soar. Among the brightly colored flowers, she had a magnificent face, but her complexion was unusually cold. Her eyes were empty, making it difficult to get close, but this coldness against the background of her face gave people a fatal attraction. Just like the poisonous poppy flower, looked at it for a while and we wanted to approach it, we couldn't stop after getting it. 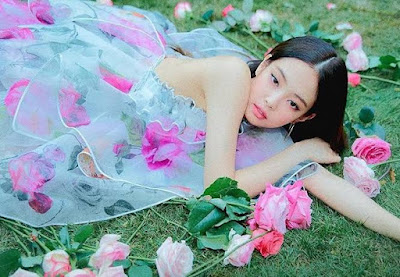 Very addicting!
"Oh! You think that I haven't noticed it yet?" Uncle Feng pushed his reading glasses and looked at the magazine cover for a moment, "Is this little girl your little friend?"
"Um."
"No wonder!" Uncle Feng smiled like a chrysanthemum. "You rarely come here to buy magazines but you already bought twice recently. So it's because of your girlfriend!"
Gu Shenliu smiled lightly, did not speak any more, and went home with the magazine.
…
When Gu Shenliu came from the door, Jiang Yu was stunned. "Aren't you cooking in the kitchen?"
"I went out to buy something."
Jiang Yu glanced at Gu Shenliu’s hand curiously, took the magazine and saw a charming face. The photo was much better than she imagined. The photographer was worthy of being a professional. It's very good. Although there was no glamorous expression on her face, it still made people feel that they couldn't help but be seduced by her.
Jiang Yu smiled and said, "I'm pretty good at being a magazine’s cover."
Gu Shenliu snorted and said: "It's not bad, it's just that the clothes are too little. Look at the sheet you grabbed, it's about to fall off. People can't help but want to rush up and lift the sheet to see what's going on." After he finished speaking, he picked up the spatula and didn't seem to care, but he said, "You're a mother, pay attention to your image!"
Jiang Yu laughed, glanced at Gu Shenliu, and said, "Well Mr. Gu, if you're jealous, just say it!"
After speaking, Jiang Yu took out a bag of quick-frozen dumplings from the refrigerator and said: "I changed my mind, let's have dumplings for lunch today."
"Huh?"
"So you don't have to dip in vinegar!"
"..."
…

Early the next morning, Jiang Yu and Gu Shenliu went to a private hospital for an obstetric examination together. Many celebrities came here when they got pregnant. The doctor gave Jiang Yu a series of examinations and finally took an ultrasound.
"It's been 9 weeks, remember to add folic acid!" Having said that, the doctor gave Jiang Yu a few boxes of imported folic acid supplement and multivitamins.
Jiang Yu looked at the photo in disbelief. On the black film, there was a long nucleus, and she couldn't see anything except that would indicate that there was a child within. "Doctor, when is my due date?"
The doctor reached out and calculated, he said, "According to your cycle, if no delay, it should be in the middle of May."
The two new parents walked out of the hospital with mixed feelings.
Although nothing could be seen on the film, which was very different from the film that Jiang Yu imagined where she could clearly see the facial features of a baby, but knowing that there was indeed a child in the belly, there was an amazed feeling that could only be experienced by herself.
Gu Shenliu also felt amazed, "Humans are as amazing as the universe. Two people can create a life. This life will be in your belly for ten months, and in the end it will become a human like us."
"It's amazing that a little thing the size of a sesame can develop into a child with five senses, hands, and feet."
At noon, they went to Mother Gu’s place for dinner. Mother Gu saw the ultrasound and smiled from ear to ear: "Ouch! The photo is a long strip, it should be a boy!"
Jiang Yu's complexion remained unchanged, "The doctor said that he can't see it for the time being."
"I can't tell based on experience, all three of my sons have this shape." Mother Gu was so happy. She shouted that she wanted to cook soup for Jiang Yu to nourish her body.
As soon as Mother Gu left, Jiang Yu secretly asked Gu Shenliu, "Does Auntie like boys more?"
"No." Gu Shenliu turned on the TV.
"Then do you think my stomach is a boy or a girl?" Jiang Yu glanced at Gu Shenliu.
"Boy?"
Jiang Yu was a little displeased. Hearing this, Gu Shenliu seemed to have a tendency to prefer sons to daughters, which was not a good sign. She asked tentatively, "Why? How do you know it's not a girl?"
Gu Shenliu snorted coldly, stared at the TV, and said, "Do you think girls are so easy to get?" Pointing to the direction of the kitchen: "My mother has three sons in a row, why do you think it is? You think only you want a girl? Our entire Gu family has a daughter-in-law for the first time, and even you can't run away already."
It turned out that it was not patriarchal, but Jiang Yu was still a little discouraged after hearing that the baby might be a boy, "I also want to have a daughter. She can wear mother-daughter clothes with me, I will also buy a bag to use with my daughter, and we will go shopping together."
"I want so too." Gu Shenliu said, "But what can we do? A son will do it too! We can't put him back."
After eating, Mother Gu smiled and said to Jiang Yu: "Taro Ball, you can give our old Gu family a fight!"
Done! Jiang Yu wondered if Mother Gu would let her have a son to pass on incense to the Gu family’s ancestor.
Unexpectedly, Mother Gu said with snot and tears: "You also know, mother suffers a life without a daughter, I gave birth to three stinky sons! My yang is prosperous and yin is declining, there is no daughter's life in this life! You have to be the salvation of the Gu family! Let’s give birth to a girl, I promise a girl will also inherit the family business like a boy in the future!"
"..."
Jiang Yu swallowed her saliva. She was worried that she would have no status after giving birth to a daughter. Who knew, boys were more discriminated against in this family. She smiled dryly: "Auntie, boys and girls are the same."
"It's not the same!" Aunt Gu cried, "Girls are soft and cute while boys will only make you angry when they grow up! Look at the three I raised, what's the use of them?!"
The three Gu brothers who were named by Mother Gu stopped eating for a while, and then continued to eat with their heads down, still expressionless.
"What's the use of you bunch?!" Mother Gu roared again: "They don't usually make a phone call or go home to visit, I can't share with them if I have gossip, they never go out with me to buy things, and they even said that they hate shopping! So taro ball, listen to me, you must have a daughter so that you can enjoy happiness when you are old!"
Jiang Yu also liked girls herself, so she comforted Mother Gu: "It's okay, we can have a second child if we don't have a girl now."
Mother Gu's heart warmed when she heard this. She was serious, as if explaining a major event, and solemnly patted Jiang Yu's hand: "In short, the Gu family depends on you!"
"..."
…

Jiang Shan on the other hand felt that the country was so cool, and even walking was windy. Recently, she bowed to the photo of Jiang Yu. People who had worked with Jiang Yu said that Jiang Yu was very prosperous, and what she did would be popular. It seemed that this was indeed the case now.
Soon, all 1.5 million copies of the magazine were added to the market.
On the same day, because of Jiang Shan's request, Jiang Yu posted another Weibo, and she laughed:
[In the past few days, many people have been clamoring for magazines, so I have helped you win them too. <Women's Wear> magazine has printed an additional 1.5 million copies, ensuring that every sales channel has stocks. But don't blame me for not reminding you, you have to hurry up, otherwise you can't buy it! If so, even if you come to me and cry, I will you!]
——Oooooooo! I will listen to what taro ball says, I'll buy it now! This cover is absolutely gorgeous!
——Although it was not taken by by Durres, I still like it.
——I have already bought it. There are a lot of encouraging words in Taro Ball’s interview, I like them very much. I have underlined the ones I like and will read them often in the future.
——It turns out that you rejected the First Lady of the country initially! So brave! Also, I took good care of the contrast and cuteness, but I didn't expect you to be secretly in love with Shenda.
——Miss Taro Ball, have you taken pre-wedding photos? When will the photos be released?
Jiang Yu replied: "I'm planning to take them. I'll announce it to you when it's finished."
——Come on! I cannot wait anymore!
——I hope that you will be more special and not so boring. I feel that every time stars get married, they are ostentatious. I think it is very boring.
——I believe the taste of Jiang Yu, she is the best!
Jiang Yu smiled, her fans have good taste just like her.