Under the publicity of half the entertainment industry, coupled with the good word of mouth, the play <Song to Qin> attracted great praise as soon as it was released. At this time, the sequel to a foreign Hollywood drama was broadcast, so at the beginning, many people chose to watch the big Hollywood movie first. Unexpectedly, many film critics' reviews came out and everyone gave a good review of <Song to Qin>, as well as Gu Shenliu's acting skills.
<Song to Qin> was very praised while the Hollywood movie was suspected of selling feelings, because the script of the sequel was not well written. On the other hand, the theme of <Song to Qin> was very novel, and there were very few movies with Ying Zheng as the protagonist in history. It felt fresh, and with Gu Shenliu's handsomeness, the audiences were hooked! It made all the women excited and many people went into the movie theater to watch this play. They had to say that although Gu Shenliu was young, he had the feeling of being an old actor.
Jiang Yu clicked to open the box office map. 200 million box office premiere!
Although the highest domestic record for premiere was 350 million, <Song to Qin> 200 million was not the highest, but it was a good start.
"Shenliu, congratulations!" Jiang Yu sent Gu Shenliu a WeChat message.
Gu Shenliu had already gone to other cities to promote the movie, and the intensive publicity plan made him not even have time to call Jiang Yu.
"Jiang Yu." Gu Shenliu returned.
"En?"
"Wait for me to come back."
Jiang Yu put down the phone and smiled. She had an independent personality. When Gu Shenliu left, she was not used to it at first, but after a long time, she felt normal. The occasional solitude gives her a chance to breathe and reflect.
Jiang Yu brought a cup of coffee and came to the window. In this world, everyone should have an independent soul. After all, there were so many good-looking skins, but not many lively and interesting souls. A good-looking appearance could only make a good impression at the first contact, but the soul would be the one to make things interesting in the years spent together day and night.
Gu Shenliu's film would definitely get a good box office if there was no accident, so it was time for him to work hard! The decoration of the Haute Couture studio had come to an end. The opening show was an extremely important thing, so it must be an instant hit! Thinking of this, Jiang Yu returned to the table and continued to work.
…
These days, the First Lady of the country had been visiting foreign countries and had been wearing clothes designed by Jiang Yu and applied the makeup that Jiang Yu suggested. Her style had been praised by people all over the country. Everyone said that she looked different from before. The First Lady of the country was not only beautiful but also had good aesthetics, and visiting abroad also made people felt that she was very popular.

Today, the First Lady of the country visited the United States. As Professor Zhou said, the first lady of the United States was wearing a black tube top and mopping skirt designed by Vera Wang. The skirt was matched with tulle, very Wang Weiwei's style.
Jiang Yu discussed the clothes for this occasion with Professor Zhou for a long time. She designed a peacock blue dress for the First Lady of the country. The neckline of this dress was still a Chinese collar, the top of the chest was hollowed out to the size of a fist, and the cuffs were made into water sleeves. The peacock blue silk dress was embellished with all kinds of crystals, which made the dress shine under the spotlight. It had received unanimous praise from designers at home and abroad.
(TN: Some imagination needed, but the dress should be like this.) 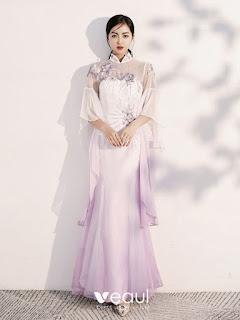 Water Sleeve
(TN: I cannot find exact matching dress from the description, sorry T-T)
Jiang Yu looked through the comments on the Internet, and Anna, the editor-in-chief of <VQ>, who ignored Jiang Yu before, praised in an interview:
"I have always thought that the color of peacock blue is very suitable for Asian skin, and with the crystal embellishment, this dress is like a star-studded garment, luxurious and generous, and with an extremely ingenious design. Compared with the other party's tube top skirt, it is unique and eye-catching, and people can notice the First Lady of the country at a glance. From this point, we can also see that this designer is very scheming. You must know that peacock blue is very photogenic, making the black dress by the other party turned into a background board!"
The reporter asked: "Do you think this designer designed it well?"
"Of course! To be honest, I still do not know who this designer is. After all, the designer who can design clothes for the mother of the country should not be accessible to ordinary people like us, but as <VQ> editor-in-chief, I know most of top people in the industry. I asked them one by one, and they all said they didn't design it. I'm very curious, who is this person, and I hope to be able to do special interview about her!"
"Special interview?"
The reporter was stunned for a moment, knowing that the special interview of <VQ> was not easy to obtain, even the masters who had attended Paris Fashion Week could only get 2 page interviews. Special interviews had at least 45 pages, generally it would also be the cover photo, so there were not many opportunities like this. Designers who had won special interviews in history were all at the level of Lafayette!
"That's right! Such a talented designer deserves our serious consideration!" Anna finally said.
Bei Xiaoxiao came over and saw this exclusive interview, she wondered, "Is this the Anna who looked down on us last time?"
"Yes." Jiang Yu raised an eyebrow.
Bei Xiaoxiao watched the interview and sneered: "Oh, she wants to interview the designer of the First Lady of the country? Then why she didn't like you last time?! Say, if she now knows that the designer of the clothes is not a master or a famous person, but a young designer like you, I wonder how she will feel!"
Jiang Yu picked up the corners of her lips, "Although she is only the editor-in-chief of a magazine, after all, <VQ> is not an ordinary magazine, editors like this are too used to designers trying their best to please them and celebrities fighting to be in the magazine. Under this conditions, she naturally becomes high-minded!"
"Even if she is high-minded, she can't speak so badly. Look what she said at the time! She despised you for doing Taobao! What's wrong with Taobao? Don't you still earn hundreds of millions just by selling on Taobao? Sometimes people is too short-sighted!" Bei Xiaoxiao felt injustice for Jiang Yu.
Jiang Yu smiled and said nonchalantly, "It's just <VQ>, I will make everyone look up to me one day!"
Bei Xiaoxiao was startled and didn't react for a moment. She looked at the compliments on the computer and was happy for Jiang Yu from the bottom of her heart. However, when she thought of the discussions of other students in the class group just now, although everyone didn't want to admit it, their tone was a bit sour. They all knew that Jiang Yu had gone too far and they wouldn't be able to catch up for the rest of their lives.

It would be fine if Jiang Yu was a second generation rich, but Jiang Yu got to this point by strength. Knowing that she couldn't catch up with Jiang Yu, Bei Xiaoxiao could only pray that her design would sell better, so that she could always hold the golden thigh of Jiang Yu! After all, she had also gotten used to the 20,000 yuan commissions every month from her own design drawings. The reason why she stayed here during the summer vacation was because she wanted to design more clothes for the big promotion. In the event, there would be no purchase limit and old customers knew how rare it was, so many of them were gearing up for this batch of clothes!
"Jiang Yu! I want to hug your thigh!" Bei Xiaoxiao rubbed herself on Jiang Yu.
Jiang Yu smiled and pushed Bei Xiaoxiao away: "Okay! As long as my golden thighs exist, I'll let you hold them!"
"That's it! I want to hug for a lifetime!" Bei Xiaoxiao stretched out her little finger.
Jiang Yu laughed and stretched out her finger helplessly. "Okay, I promise you! Go back to work!"
Bei Xiaoxiao put down her fingers in satisfaction.
Many years later, Bei Xiaoxiao had a car, a house, and status. With her own team, she often went abroad to attend design exhibitions and purchase stocks for the company! She often did exclusive interviews on behalf of Jiang Yu and dealt with the media. At that time, when she thought of this day, she would be extremely grateful for her intelligence. How could she be so lucky, to be able to hold the golden thigh of Jiang Yu, take a ride, open the back door at any time in the company, and embark on the road of making a fortune and becoming a well-off independent woman!
...
Jiang Yu was working when Jian Si's message came over.
"Jiang Yu, many people have asked me for our beauty cream recently!"
"Huh?"
"Really! Because of the name change, even my mother didn't know that this beauty cream was invented and produced by me. She heard from her little sister that beauty cream is very popular in the circle of ladies in Shencheng. Those who haven't used it will only show that they are too low-level, and they also say that this thing is expensive and hard to find, so only real rich people can use it!" When Jian Si said this, she laughed, "Do you think it's funny? To be honest, I originally thought about putting this product in your store to sell and just use the Huajianji brand. I thought it would be good to sell it for two or three hundred at most, but I didn’t expect it to be popularized by you all at once.”
Jiang Yu smiled. In fact, it was well known that selling cosmetics were very profitable. Just imagine, how much would a bottle of toner cost? With the selling price of several hundred, excluding advertising fees, labor costs, rent, etc., the cost of the real product was negligible. The production cost was very low compared with the selling price. Besides, how much would a sheet mask cost? For a mask that only cost a few yuan to produce to be sold for hundreds on TV, its profits margins were scary.
In 2015, Procter & Gamble's net profit was 55.3 billion, Unilever 38.2 billion, L'Oreal 25.3 billion, and Estee Lauder 7.7 billion. Just imagine where these profits come from? It was from women that bought bottles of skin care products and cosmetics from them!
In terms of the cost of the beauty cream, it wouldn’t be too high to sell it for a few thousand. After all, the cost of packaging and cost research and development was definitely not less than that of big brands. Jiang Yu's hype on beauty cream also made it more compelling.
So now, how to price it had also become a problem.