Zhong Xiaohui was so excited that he was busy taking pictures of Gu Shenliu. At this time, he glanced at the two women behind him. The well-maintained middle-aged woman beside him should be Gu Shenliu's mother. Mother Gu was interviewed before, so he vaguely remembered this appearance. As for the young girl next to Mother Gu who was close to her, very much like a mother and daughter, although she was wearing sunglasses so it was hard to tell from a distance, but her long legs...
Sh*t! It's Jiang Yu!
Zhong Xiaohui was completely blown up! Gu Shenliu's marriage proposal was actually for Jiang Yu! It's not a hype, it's true!
As an entertainment reporter, Zhong Xiaohui suddenly doubted life...
"Jiang Yu, Jiang Yu!" Zhong Xiaohui hurriedly took a few photos: "Gu Shenliu, is the object of your marriage proposal Jiang Yu?"
Gu Shenliu didn't deny it, he just smiled and said, "Yes!"
Sh*t, Gu Shenliu actually admitted it! The fans who picked up the plane on the side covered their mouths and couldn't believe it.
"When did you meet?"
"How long have you been dating?"
"Did you date while filming?"
Gu Shenliu said: "That's right, we were already dating when we were filming. The proposal is a choice made after careful consideration."
After he finished speaking, Gu Shenliu stopped answering questions. Under the protection of the bodyguards, he quickly walked into the nanny car, protecting Jiang Yu and Mother Gu.
Zhong Xiaoping looked at the photo in his hand, but he couldn't get back to his senses for a while. Seeing that various media around him were editing mobile text messages and Weibo, he didn't dare to delay anymore. He quickly posted Weibo.
At the same time, @Pick Up Wife posted on Weibo: "Dears! Breaking news! Gu Shenliu's marriage proposal is actually for Jiang Yu!"
——F*ck! I do not believe!
——Do not believe!
——Really? Is Jiang Liu CP really together? I love this pair!
——The fans who like Gu Shenliu will be lost in love and the fans who like Jiang Yu will also be lost in love, and I like both Gu Shenliu and Jiang Yu. Who can understand the taste of my heartache?
——Really not hype? ? ? ? ? ? ? ? ? ? ?
On the other side, Gao Jing directly called the staff of Gu Shenliu's studio: "Is the announcement ready? Good! Send it out!"
Soon, Gu Shenliu’s account posted three photos on Weibo. The first photo, the charming scenery of Maldives, under the blue sky and white clouds, a selfie in front of the swimming pool, really surprised fans. Gu Shenliu and Jiang Yu... the two laughed and looked so happy together. Especially Gu Shenliu, his kind of healing laughter made people have no resistance!
The second photo was the scene of the marriage proposal. At sunset, on the white sandy beach of Maldives, with the sea as the curtain and dream as the horse, a circle of people surrounds the two. Gu Shenliu knelt down on one knee holding a ring and a veil, Jiang Yu stood in front of him with a smile on her face. Gu family was there, Gao Jing was there, a staff member put a wreath on Jiang Yu, and then Gu Shenliu put the veil on Jiang Yu before he put the ring on her hand. 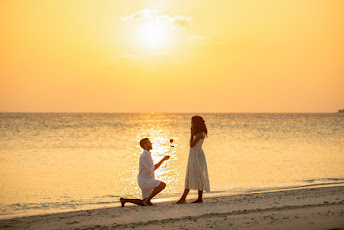 What a sweet marriage proposal!
The third photo was Jiang Yu's hand. Of course, the focus was not on the hand, but the big diamond ring on the finger that blinds all single dogs’ eyes.
Although Gu Shenliu's Weibo was posted by the studio, the text was drawn up by him: "Getting married, not because of age, not because I want someone to accompany me, not because I need a family life, but because that person is you! I wear clothes that you designed and you wear a veil that I made myself, that's all! @Stylist Jiang Yu."
——Cry!
——Unacceptable! So sudden! Fans always announce their love news first before they announce marriage, but what about you? You announce the wedding directly! We really can't accept it. After loving you for so many years, you are already someone else's man! Cry to death...
——Tell yourself to be strong, tell yourself that this is a good thing, but why am I so uncomfortable?
——Jiang Liu CP came true? OMG! I love you two so much, congratulations...
——Both of them are so good looking! In fact, it is lucky that the object is Jiang Yu, because I looked around and found that I couldn't compare to her at all.
——So touching! Not because you want to get married, but because the other party is you!
——Your suit is made by Jiang Yu? And Jiang Yu's veil is made by you? Huhu, I still want to cry!
——Ahhh! I really like you both. I didn't believe it at first. I went to review <The Entertainment Circle of Chong Fei> just now and found that you are really so loving!
——Bless you both!
The news was explosive! As the fans said, people usually announced the news of love first, but Gu Shenliu was better, as soon as he came up, he announced marriage! Of course fans would feel shocked!
Gu Shenliu's studio subsequently released Weibo to announce the good news of the two.
In just 2 hours, Gu Shenliu's post was reposted 200,000 times and had 150,000 comments! The numbers were amazing!
Later, Jiang Yu took out Weibo, looked at the shocking comments, and forwarded it with a smile: "A prudent decision made by two adults, I hope to be blessed by everyone! Please advise me for the rest of my life, Mr. Gu!"
——Taro ball, it's too sudden! Yesterday you planted grass for me and today you said you were going to marry.
——Taro Ball, you are still so young! Why you think about getting married? Although Gu Shenliu is very good, you don't need to rely on a man!
——Why are the fans crying? I think these two are great! Especially love this pair!
——Ahhh! I love you so much! My goddess and male god are getting married, so happy!
——Taro Ball, it's nice to see you happy!
——I have blood on my face!
At first, both fans felt very shocked. Everyone had the expression "If my idol is not married to me, I won’t listen, won’t listen, won’t listen"!

However, after calming down, everyone thought about it. Wow! Gu Shenliu's marriage partner was Jiang Yu? A beautiful, rich, and woman with good character! What were they dissatisfied with? Jiang Yu's marriage partner was Gu Shenliu? Talented actor with zero gossip and also a rich man! What were they dissatisfied with?
The male god and the goddess were very compatible! Why should they be unhappy? Yes, maybe this news was too sudden and make everyone felt a sense of lovelorn, but Jiang Liu CP had always been very cute for everyone. It was a great thing for it to be a reality!
By evening, the winds of the comments had changed.
Gu Shenliu's fans: "Hehe, it turned out to be Jiang Yu... Oh, Jiang Yu, hello sister-in-law! Sister-in-law has worked hard! Sister-in-law, please take care of our Gu! Also try to have a few cute little Gu!"
Jiang Yu fans: "Hehe, it turns out to be Gu Shenliu... Oh, Hello Gu Shenliu! Gu Shenliu is handsome! Gu Shenliu is rich! Gu Shenliu married my Jiang Yu! Awesome! Great! What? I didn't approve of Jiang Yu's marriage before? Haha, the object is Gu Shenliu, how can I disagree! How can I?"
Passerby A: "Male stars have loved Internet celebrities since ancient times. Should I also go have plastic surgery to become an Internet celebrity?"
Passerby B: "The two are a good match! No matter their appearance or their worth! They are a combination of strengths!"
Passerby C: "Ah ah ah! Lan Xiaoxiao and Zhuang Xu are really together!"
That night happened to be the day when <The Entertainment Circle of Chong Fei> was broadcast.
Because of the popularity of Gu Shenliu's marriage announcement, the number of people watching the premiere of this web drama reached an astonishing number that day, almost surpassing the best ratings of star studded dramas on satellite TV! It had reached the point where almost everyone watched <The Entertainment Circle of Chong Fei>!
Now, when they looked at the two actors on <The Entertainment Circle of Chong Fei> again, the feelings had changed.
The marriage news of the two turned <The Entertainment Circle of Chong Fei> into a dog abuse drama. Everyone was surprised to find that the interaction between the two was very natural. They thought it was "good acting" before, but now they knew it was because of true feelings. These two didn't need to act well at all! They were really together!
Gu Shenliu's diehard fan A: "I've been following Gu Shenliu for nearly 10 years. Today, I lost my love!"
Gu Shenliu's diehard fan B: "Stop talking, I bought Erguotou*." (TN: Chinese liquor.)
Jiang Yu diehard fan A: "Hehe, do you think it's just your Gu Shenliu that has many fans? My Jiang Yu going to get married, so I'm sad too! Making money and marrying Jiang Yu is my goal in life!"
The two announced their marriage on Weibo, and the number of repost in 24 hours reached 890,000! 1.3 million in 48 hours and 1.6 million in 72 hours!
Gu Shenliu had never had any love scandals, so who would have known that once his love news was announced, it would be chaos!

And Jiang Yu getting married so early, also shocked her classmates to drop their jaws. When Jiang Yu's classmates heard the news that she was getting married, they probably could put an aircraft carrier in their mouths! Marry? 21-year-old college student was about to get married? Could it be that the world of top student was different from ours?
That night, there were many more gossip posts in online forums.
[Does anyone pay attention to the news of Gu Shenliu's marriage? Come to 818 these two!]
[Crying Blind... Gu Shenliu's marriage partner turned out to be the Internet celebrity Jiang Yu?]
[818 of Internet Celebrity Jiang Yu! In other words, this girl's life is simply a model of inspiration!]
[Guess how much money Jiang Yu, Gu Shenliu's future wife, has?]
[Jiang Yu's haute couture studio is about to be established, doesn't anyone think that the announcement of the marriage at this time is for hype? Oh, I heard that the ratings of the web dramas have also increased greatly! It's a really good timing!]
Television, newspapers and magazines, the Internet... the news of their marriage was overwhelming.
People kept calling Jiang Yu to verify this matter. Many students also congratulate on the Internet, so Jiang Yu thanked them all.
Aunt Yu Hong, Zhou Xiao, and Zhou Yue also asked Jiang Yu after seeing the news online. She replied with a smile and said that they would be invited to attend the wedding as her maiden family.
As for Jiang Yu’s blood related family members... Xu Shi saw the news of the marriage on TV and kept sending text messages or Weibo messages to her, saying that they were her maiden family, so the betrothal money given by the Gu family should be handed over to them! According to them, the groom’s family measured their intention to marry thru the bride price. Therefore, Jiang Yu's cheap mother asked for 10 million!
Jiang Yu directly blocked their numbers!
As the bride-to-be, Jiang Yu’s joy was diluted by her work. A lot of work was waiting for her. Amid the news, she booked a flight to Beijing.