Because it was a charter flight, there were only two of them. The plane stopped, the hotel staff came out to greet them and took them to check in.
The wooden bridge stretches into the distance, immersed in the blue sky. The sky was blue and the sea water in the distance met the blue sky covered with white clouds. The sea seemed to be covered with a layer of color, blue, white, green, each colors were very clear and bright. Such colors were almost not real. Jiang Yu suspected that if she didn’t see it herself she would think that the beauty in front of her could only be seen on postcards.
The second time Jiang Yu came to Maldives, her heart was still agitated. The environment on this island was better than that of Rangali Island. The designer’s intentions could be seen anytime, anywhere. It was worthy of the design of a well-known designer, and it was worthy of being a LV hotel. The design was reflected in every detail, so that the elegance and romance endowed the White Horse Manor with a different taste and style, although still ingenious.
"I thought about taking you to Soneva Jani to experience the automatic roof and slides. I haven't been there because of my busy work, but the comments from my friends are unanimous, saying that there is a lack of management there and the experience is very poor. So, after thinking about it, I decided to bring you here." 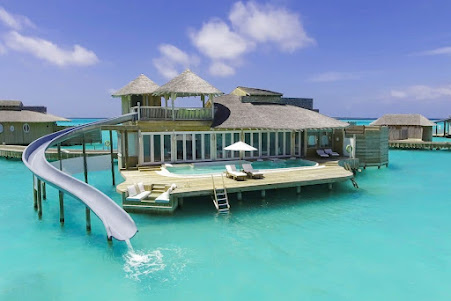 Gu Shenliu put his arms around Jiang Yu's shoulders, the sea breeze blew, and his always indifferent eyebrows became gentle.
Jiang Yu fell into Gu Shenliu’s arms, and she smiled: "Actually, it's the same wherever we go."
"Huh?"
"Beautiful scenery is nothing more than the same thing. Sometimes it's not the beautiful scenery, but the people who accompany you to watch the scenery that makes things different. If people are happy in their hearts, everything they see is good."
Gu Shenliu raised the corners of his lips and snorted before saying, "President Jiang is quite emotional."
"Cough cough! Bosses must be different!"
The two looked at each other and smiled.
Stepping on the soft white sand, the two walked forward, Gu Shenliu thought about Jiang Yu's words just now, his eyes gradually became gentle. Maybe that's what it felt like to love someone.
Eat the same delicious food, passed by a charming city, see a beautiful scenery... You no longer thought about the food, the city, the scenery itself, but the person you wanted to share it with. Therefore, when Jiang Yu was in a bad mood, Gu Shenliu brought her here to see the world, even if he was also busy with work. Maybe this was love.
Gu Shenliu's lips curled slightly and he said, "The design of Cheval Blanc is better, I think you should like it."
Jiang Yu directly expressed thanks with a kiss. She, who was besieged by reporters for many days, was breathing the air of Maldives. It felt so good that no one knew her!
A few staffs kept looking at Jiang Yu and smiled meaningfully, making Jiang Yu felt inexplicable. Looking back, she thought that the staff probably acted like this to everyone! Just like Thailand was known as the land of smiles, she would also see everyone smiling on the streets here.
At this time, Jiang Yu realized that the smallest water villas on the island were at least 240 square meters. There was a 12.5-meter-long horizontal swimming pool in front of the villa. When they entered, they would see a 7-meter-high living room with floor-to-ceiling windows facing the swimming pool and the stunning sea view.
This kind of design fascinated Jiang Yu. After entering the villa, she was sincerely convinced by the designer. Every detail was the result of careful preparation. It was also the reason why the Cheval Blanc could keep so many tourists in love even though they charged such a high fee.
The housekeeper said: "You can control everything in the house with an ipad. You can check which items are charged and which are free. The gym is open 24 hours a day and you can play table tennis, tennis, volleyball... You can also board the boat to do spa. We provide spa services from Guerlain. We have Italian restaurant on the island called Deelani and the other is Le 1947 which has very good red wine. These two restaurants need to be booked in advance. If you don’t book in advance, it may be difficult to get a table."
After finishing speaking, he added: "Diptyque is a Japanese restaurant. It only opens for dinner on Friday, Saturday and Sunday. You also need to make an appointment in advance."
"Thank you." Jiang Yu said with a smile, took the tip from Gu Shenliu and expressed her gratitude.

The 7-meter-high roof gave the villa design more room to play. The simple color and line collocation made Jiang Yu once again sighed at the greatness of the designer! She also secretly reminded herself that she should also be a fashion designer who could bring other people a different experience.
"Change your clothes and try the pool!" After Gu Shenliu finished speaking, he put the yellow floating pad into the pool.
"Is this provided by the hotel? Tsk tsk! This color is very photogenic!" Jiang Yu put on a red one-piece swimsuit and lay down. She hooked her long legs in a yoga pose, and smiled at Gu Shenliu: "Old Gu, take a picture for me!"
Gu Shenliu took out his professional equipment and took some pictures for Jiang Yu.
"How about it?"
"Beautiful!"
"Are you talking about the person or the scenery?"
"The person is more beautiful."
Jiang Yu was satisfied and smiled at Gu Shenliu: "I thought about it all the way, I don't want to shoot these two boxes of clothes specially, otherwise this beautiful scenery will be wasted. There are summer clothes in the collection so I will just wear them as daily clothes and then you can take pictures of me by the way. With this I won’t worry about wasting time.”
Gu Shenliu smiled: "Your arrangements are great." After a while, he teased: "I will listen to President Jiang's instructions."
Jiang Yu was fascinated by the scenery in front of her. She jumped into the swimming pool and swam a few times. When she got up, she found that Gu Shenliu had already gone into the sea.
Gu Shenliu was really good at swimming, unlike Jiang Yu who could only do simple paddle movements, he could actually do breaststroke and butterfly stroke. Anyway, for a person with poor water skills like Jiang Yu, Gu Shenliu’s posture was textbook-like!
Gu Shenliu swam for a while, stepped on the wooden board and said, "As in the legend, the snorkeling environment around the water villa is not good. The coral damage is relatively serious and there are very few fish."
"Huh?"
"I asked the housekeeper to help us charter a boat to snorkel and see dolphins."
…
At noon, the two went out for a walk and had a meal by the way. Jiang Yu unexpectedly found that there were very few people on the island. "Isn't July the peak season? Students were on summer vacation, and us Chinese people can contract global tourist attractions in minutes."
"July is the rainy season in Maldives and it's not the peak Chinese tourist season."
Jiang Yu thought about it for a while, nodded, and said, "The children are making up classes in July, so August is the real peak season!"
When coming to Maldives for vacation, most people just lay in the hotel, swimming, reading, snorkeling, or dazing around, but Jiang Yu took out her sketchbook, drew a few inspirations, and then threw the book aside because there were pictures that needed to be taken. She directly changed clothes and stood in the water of the infinity pool, and asked Gu Shenliu to help hertake pictures.
It was the first time for Gu Shenliu to take a model photo for her, so Jiang Yu was a little embarrassed. "Help me take a more beautiful photo! I want long legs, small face, slim waist..."
Gu Shenliu couldn't stand Jiang Yu’s expression.
"I'm serious! Do you think being Taobao model is easy? Not only do we have to highlight clothes, but also the beautiful model. If the clothes are beautiful but the model are not beautiful, buyers won't buy it! In short, I will treat the anniversary promotion just like double eleven this year, so it is a very important event. I will show Mr. Gu how much money I can make!" After speaking, Jiang Yu clenched her fists.
Gu Shenliu smiled. "Don't worry! I will definitely take a beautiful picture for you!"
In fact, Jiang Yu was not afraid that Gu Shenliu wouldn’t take pictures of herself beautifully. After all, she knew Gu Shenliu's photo skills. What she was worried about was that Gu Shenliu would take her too artistically.
Taobao didn’t eat that kind of artistry, especially in clothing photos. Such photos would make customers had no desire to buy and didn’t meet the requirements. Jiang Yu wanted pictures with a certain style on the basis of highlighting the clothes!
After taking the three sets of clothes, Jiang Yu said worriedly, "Show me the photos!"
Gu Shenliu handed the DSLR, Jiang Yu took it and took a look...