Soon, Jiang Yu called Pang Jichun: "Hey, Mr. Pang, that batch of goods..."
Pang Jichun's heart skipped a beat. He heard that Jiang Yu's store released the shoes today. She was calling now, did it mean that she want to change the order quantity? If she really couldn’t sell, she had no way but to cancel the order. With the relationship between Jiang Yu and Gu Shenliu, Pang Jichun really couldn’t do anything about it either.
Thinking of this, Pang Jichun hurriedly said: "Miss Jiang, the order has been placed, so it cannot be cancelled!"
"Cancel the order?" Jiang Yu heard Pang Jichun’s cautious tone and then she realized that Mr. Pang didn't trust her at all. He didn't think that Jiang Yu could sell 30,000 pairs of shoes at all.
Jiang Yu smiled and said: "Mr. Pang, you think too much, I called you this time to add an order instead! Because the lack of experience, I underestimated the customer's purchase volume, so I ordered not enough for some common sizes. I called you to add 10,000 pairs of common size 37 and 38 shoes!"
"What?" Pang Jichun didn't return to his senses for a while, "Are you sure you're increasing the order? Not reducing it?"
"I confirm!"
Pang Jichun was silent for a long time and hadn't regained his senses. He realized later that he seemed to have misunderstood something. Wasn’t Jiang Yu a little girl that opened an online Taobao store? Why her sales so big?
Pang Jichun searched Jiang Yu’s online store and saw that it was almost golden crown! And the friend who participated in the TV show mentioned by Jiang Yu was not an ordinary person, it was the actress Su Ye! No wonder, could a friend of Gu Shenliu be ordinary?
Thinking of this, Pang Jichun suddenly felt that he had been in business for so many years but he was still a fool! He couldn’t even see this!
For a while, Pang Jichun felt a little uncomfortable. He had worked hard all his life to get this result, but Jiang Yu had climbed to today's status at a very young age. She could just casually post a Weibo and there would be a lot of fans responding. Everyone bought things she recommended and flooded her store. Meanwhile, he had been making shoes all his life but in the end, no brand was willing to believe in his shoe-making skills. The only one who trusted him was this little girl!
Pang Jichun's heart was sour.
…
At the same time, Bi Peijun knocked on the door of the Jiang Yu’s office, and she said to her in disbelief: "President Jiang! I didn't expect that after our company was exposed on the Internet, our company mailbox will be instantly crowded! There are so many resumes coming and people from all over the country are submitting their resumes. I really don't know what to do!"
"Eh?" Jiang Yu was a little surprised. Bi Peijun had been complaining about not being able to recruit people before, but now that many people had submitted their resumes it had become a burden?
"Yeah, look, the mailbox is no longer working properly."
"Find the technical department to help you with that." Jiang Yu slightly curled the corners of her lips.

Who would have thought that the crew that Su Ye brought unintentionally not only made Jiang Yu and her brand popular, but her company was even more popular! Now job seekers all over the country wanted to work with her.
"Peijun." Jiang Yu suddenly showed a wicked smile and she said, "There must be a lot of people online who want to know about our company's employee benefits, right?"
"Yes, but don't worry, our company's employees are very strict. No one will deliberately say such private things online."
"No! On the contrary, I want you to tell them all!" Jiang Yu smiled.
Bi Peijun was a little puzzled: "You mean..." After a while, she frowned slightly and then smiled: "You mean we should take this opportunity to make the company more popular? Use this opportunity to hype it up?"
Jiang Yu stood up and took a sip of her coffee. She was wearing a colorful halter neck jumpsuit with a black light blazer, this made her look stylish and chic.
Bi Peijun couldn't help but look at Jiang Yu secretly. To be honest, there was an advantage of working in the company, that was, Jiang Yu never harshly demanded employees to work hard every day. Because it was a clothing company, Jiang Yu encouraged everyone to discuss fashion-related things. When they came across beautiful clothes, they could send the pictures to the design department for reference. Jiang Yu’s daily dress was also an example for the employees. The employees secretly took pictures of her outfit every day and sent them to private employee only group. Everyone followed along and learn every day. Sometimes Jiang Yu was not wearing the clothes from the store, so the employees went to the Internet to find the same style to match. Therefore, the dressing taste of the employees also improved a lot recently.
Today, the colorful halter neck jumpsuit that Jiang Yu wore, the golden high-heeled shoes from the store, the small black blazer, and Jado's handbag had become the objects of discussion.
Jiang Yu also took a selfie and posted it on Weibo this morning, so netizens started to discuss like the employees.
Bi Peijun thought happily that, as employees, it would be better for them to be able to see Jiang Yu's demeanor with their own eyes rather than to discuss blindly with netizens.
Jiang Yu came and stood for a while, her legs looked very stylish with the jumpsuit.
"No, Peijun, you are wrong!" Jiang Yu took a sip of coffee and smiled lightly: "The hype is not a big deal for me, because if I want to make the company popular, I just need to post a Weibo. The reason why I let you use the trumpet account to secretly leak out employee benefits is mainly to recruit more talents. Now the company is in the development stage, our Tmall is about to open so a more professional team is needed. Now we are just thirsty for talents, but real talents are rare!"

"I understand!" Bi Peijun smiled. Now there were more than 50 employees in the company. Because Tmall and Taobao would be operated separately, they would need more than 30 people for Tmall. After filling up the vacancies, the company would soon reach the scale of 100 employees.
Jiang Yu pondered: "Remember! Focus mainly on recruiting design, promotion, and marketing talents!"
"Yes!"
Thinking of this, Jiang Yu just remembered that Alex, who was recommended by Gu Shenliu 121 last time, had not replied to her email.
At this moment, Jiang Yu opened a private message and saw a special private message from a job applicant.
"Huh?"
It was from a girl named Zhong Xiaoping. She was not a fashion design major so it stood to reason that it was impossible for her to be accepted, but the girl had a sincere way of talking and a sincere attitude. She described how she had tried amateur fashion design since elementary school and that she was also obsessed with the process of clothing design. She asked Jiang Yu to give her a chance to see whether she was suitable for this line of work.
Bi Peijun walked over to take a look and said, "President Jiang, there are many little girls like this outside. They always feel that they are already working very hard. But in fact, who in this world has an easy life? She is not a professional, so it will be difficult!"
The design department had always been managed by Jiang Yu, so she flipped through Zhong Xiaoping's drawings and pondered for a moment.
"How do you think about her designs?"
"It's remarkable!" Jiang Yu continued to look at it again. To be honest, Zhong Xiaoping's painting skills were very good, and she was also very good at painting models. The models outlined in just a few strokes were very popular, but when it came to the clothes... it's far worse! 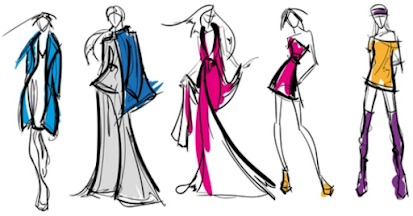 To put it in a way, the clothes drawn by Zhong Xiaoping were particularly lacking in spirit. With this, she wouldn’t even pass the company’s document level selections. From Jiang Yu’s point of view, the girl seemed to want to draw real clothes into her design drawings, which made the clothes looked a little stiff, but obviously that's not a problem with the design, just the presentation.
To be honest, it was impossible for such a person to be recruited into the company. For Jiang Yu, time was money now, so she had no time to train a new person to get started from the basics.
However... Jiang Yu glanced at Zhong Xiaoping's resume. Zhong Xiaoping had been a regular volunteer since she was a child. She had been donating money through UNICEF and often went to the mountains to help poor children. Her charity work was also not like other people's where they just planned to experience life, because her charity was very regular. Many photos of the activities were attached at the back, which made Jiang Yu have a good impression of the girl.
Bi Peijun glanced at Jiang Yu's face and immediately said, "President Jiang is planning to hire her?"
Jiang Yu smiled and said, "Just give young people a chance, why not? Let's do an interview. If you think there is no problem, hire her as my assistant."
Bi Peijun thought to herself, you are also a young man! She smiled and said, "If you want to hire an assistant, it will be more suitable to find a graduate student..."
With Jiang Yu’s current reputation and status in the beauty and fashion industry, she was no worse than other big-name stylists, not to mention she was really capable, even if she got a master or doctoral student as an assistant, it wouldn’t be weird at all.
"Go! Although we are actively recruiting, the candidates must speak with strength in the end!"
…
Before they knew it, another week had passed, and the first batch of shoes from Jiang Yu’s store had all been delivered to customers and some customers even already tried to wear them for almost a week.
At the beginning, everyone was skeptical. Could there really be high heels that will not hurt the feet? Was that possible?
However, Jiang Yu's shoes were very beautifully designed and she was a big-name designer after all. A pair of shoes designed by such a designer could be sold for several hundred yuan, which was not very expensive, so almost everyone bought a pair for the sake of appearance. As for whether it would really be good for walking? In the minds of beauty lovers, this was not the point at all.
Who knew, when they came home after wearing it for a day, they suddenly realized that – Wow! I wore high heels all day today? But why don't my feet hurt? Why can’t I feel anything? It's like wearing flat shoes! Could it be that what Jiang Yu said was true? Did she really solve the pain point of wearing high heels?
So, everyone went to Jiang Yu's Weibo to leave a message.