At this time, Jiang Yu realized that it was inconvenient to not have a car, so she secretly decided that she had to take the time to get a driver's license. Arriving at Xiang Song Garden, Gao Jing opened the door for her, she frowned and asked, "What happened to him?"
Gao Jing looked solemn and sighed.
When Jiang Yu saw this, her heart sank. She grabbed Gao Jing's arm and said solemnly, "What's the matter?"
Just now, Gao Jing said something very serious on the phone and then he said that Gu Shenliu was dying. Then he said that he didn't know if Gu Shenliu could hold on, so he told her to come over quickly.
Jiang Yu pondered. Maybe there was a problem with the wire during filming, so she hurried over. "Where is he?"
Gao Jing covered his face and leaned back against the door frame, his shoulders twitching. "He... Jiang Yu, you have to be mentally prepared..."
Jiang Yu frowned. Thinking about the worst situation in her heart, she hurriedly walked to Gu Shenliu's bedroom. She opened the door and saw Gu Shenliu wearing a thin black knitted sweater lying on the bed. He looked pale and bloodless.
Jiang Yu walked over and subconsciously checked Gu Shenliu's breath. Strange... breathing was normal!
Suddenly, Gu Shenliu opened his eyes. His eyes as cold as a cold pool narrowed slightly, he seemed a little sleepy and he asked in a slightly tired voice: "You came?"
"Are you okay?" Jiang Yu was a little worried.
"It's fine, just sleeping." After Gu Shenliu finished speaking, he suddenly fell asleep. When Jiang Yu pushed him again, she found that she couldn't wake him up. She reached out and touched Gu Shenliu's forehead again. It was very hot.
"Gao Jing..." Jiang Yu walked out, frowned and asked, "What happened to Gu Shenliu? Didn't you say he was dying?"
Gao Jing made a sound from the courtyard, Jiang Yu heard it and walked directly to the terrace.
Gao Jing laughed and said, "Jiang Yu, I didn't lie to you! He is really dying. He has been having insomnia for a long time and he also has a severe cold. If this continues, he will die soon!"
Jiang Yu had long noticed that Gu Shenliu's sleep habit was not good. Several times, he updated his circle of friends at 4:00 AM in the morning, the time where most normal people sleep. "Did he go to see a doctor if he couldn't sleep well? Did he take medicine? Is there a solution?"
"He doesn't need to take medicine!" Gao Jing pointed at Jiang Yu and smiled: "Jiang Yu, you are his medicine. You can just stay by his side and let him sleep for a while, he will immediately get better!"
After speaking, Gao Jing grinned and said: "However, now he also has a fever. I'm a big man with thick hands and feet, so I can't take care of him. So, I will leave it to you, little junior sister! You Shenda University’s students are all-rounders. Such trivial matters shouldn’t be difficult for you, right? It’s getting late, so I’ll go first! Little Junior Sister, Shenliu’s place is big, you can just stay here tonight." After he finished speaking, he blew a kiss to Jiang Yu and ran away in a hurry.
Jiang Yu didn't know whether to laugh or cry. She realized that she had been deceived by Gao Jing.
"By the way, little junior sister, remember to stay by Shenliu side all the time! That way he can fall asleep!" Gao Jing shouted from a distance.

Jiang Yu only felt strange when she heard this, but after thinking about it for a while, she didn't bother anymore. She went back into the bedroom, prepared a cold towel, and put it on Gu Shenliu's forehead.
She didn’t know if it was a psychological effect, but Jiang Yu felt that when she was beside Gu Shenliu, Gu Shenliu's breathing seemed to be gentler. But as soon as she left, Gu Shenliu would frown, and there were signs of him waking up. So strange! Could it be that she really had medicinal value and could actually cure Gu Shenliu's insomnia?
Jiang Yu was about to change the water for the towel, but just as she was about to leave, she felt pain in her arm. Gu Shenliu squinted sleepily. His eyes looked heavy and he glanced at her with a very strong oppression.
Gu Shenliu's eyes fell on Jiang Yu's hand. After looking at the towel, he seemed to understand, but he didn't let her go. After a moment of silence, he used a little force, pulled his hand and by effect pulling also Jiang Yu into his arms.
Jiang Yu lied on Gu Shenliu’s chest and shouted in a muffled voice, "My shoes, they haven't been taken off yet."
Gu Shenliu directly reached out and took off Jiang Yu’s shoes, still hugging her.
Gu Shenliu’s temperament had always been cold, and he was very assertive in his actions. He had always been one-of-a-kind that never showed his emotion. In the past, Jiang Yu suspected that it was impossible for her to see Gu Shenliu showing weakness, but now, he hugged her and didn't let her leave. Although he didn't say a word, she still felt a sense of being needed.
A woman was a very unique species. Whether it was a man, a parent, or a child, as long as they felt that they were needed, their heart would soften. Jiang Yu sighed and then laughed: "I'll go back and get a change of clothes first. After that I will come back to take care of you."
Gu Shenliu's low and magnetic voice came: "You can wear whatever clothes you want in my wardrobe."
"Underwear! Underwear has to be changed!" Jiang Yu didn't feel embarrassed.
"I also have unopened underwear in the closet, you... just pick one!"
Jiang Yu laughed. Thinking of Gu Shenliu’s waist width, she smiled and said, "Are you sure with your waist width that it won't fall off when I am wearing it?"
"It's better if it falls!" Gu Shenliu's voice was calm and unwavering: "I'll pick it up for you."

Jiang Yu wanted to say thank you!
Gu Shenliu hugged Jiang Yu like this and didn't let her leave. His exercise habit made his arms extremely strong. Just hugging her casually like this made him look domineering. Jiang Yu wanted to push him, but saw that he had fallen asleep again.
Gu Shenliu’s body temperature was rising, so the breath he exhaled was very hot. Jiang Yu was worried and gave up the plan to go back to change her clothes. She thought about asking Bei Xiaoxiao to send some, but it would be unsafe for her to go back and forth alone at night. Thinking about it, Jiang Yu still decided to follow Gu Shenliu's proposal and wear his clothes.
When Gu Shenliu fell asleep, Jiang Yu went to the inner room. Gu Shenliu’s master bedroom was made by opening up 2 rooms. Outside was where he slept and inside was his cloakroom.
As expected of an actor's cloakroom, famous brand suits, famous watches, cufflinks were everywhere... Gu Shenliu's wardrobe consisted of mostly suits and there were very few casual clothes. There was also no variety in colors. Most of the items were black, white, or gray, but it was very clean. The housekeeping was done very well.
No wait! Jiang Yu remembered that Gu Shenliu said in <Celebrity Wardrobe> last time that he always cleaned his bedroom by himself. Thinking about it this way, Gu Shenliu's wardrobe was not the same as the one he showed on the show. It could be seen that what he showed last time was not what he really used.
Gu Shenliu's shoes were also arranged in an orderly manner, most of them were leather shoes with all kinds of colors. Each pair was well placed and polished, it looked like it was taken care by a person with high self-demand.
Jiang Yu smiled and immediately took out new underwear from the drawer. She had a weird feeling as she looked at the loose panties around her waist. After taking a shower, she put on Gu Shenliu's loose white shirt and lay directly on the bed. 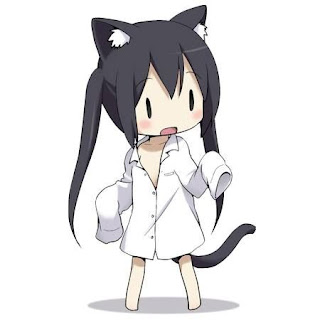 Tomorrow was the weekend and Bei Xiaoxiao was at home alone. Jiang Yu was afraid that she would be worried, so she texted her. She then turned off the phone and went to sleep.
…
The next morning, Gu Shenliu woke up from his dream. He frowned and looked at the ceiling and he didn't react for a while. Ceiling? He couldn't remember how many years he had not woken up in bed. Because the noise in his ears was clearer at night, he often wanted to cut off his ears. Every night, he couldn’t sleep, so he could only read books, exercise, clean up, or do something to pass the time almost every night until dawn. As for waking up on the bed... he had forgotten how it felt to even sleep in a bed.
What happened?
Gu Shenliu frowned slightly, his fingers felt that there was a person beside him, he looked sideways and saw Jiang Yu wearing his white shirt. She was lying on her side without makeup. Only then did he realized that she didn't go back last night.
His fever subsided, the pain in his head was no longer there and he had a good night's sleep. The morning sunlight filtered in through the gaps in the curtains and the girl he liked was sleeping beside him. Gu Shenliu suddenly raised the corners of his lips. A kind of unprecedented satisfaction was born in his heart. He couldn't help reaching out and stroking Jiang Yu’s loose hair. The girl was very beautiful and really matched his liking. The loose white shirt wrapped her good figure, but only covered the roots of her thighs.
Suddenly, Jiang Yu's eyelashes trembled. She opened her eyes and saw Gu Shenliu. She didn't panic. She waved her hand lazily and said, "Are you awake?"
"Um."
After a pause, Jiang Yu got up, checked Gu Shenliu's temperature, and then smiled: "The fever is gone!"
Gu Shenliu pursed his lips into an arc.
Jiang Yu stretched her waist, her hair drooping casually. Her hair was messy but still stylish, which made her facial features less sharp and softer than usual. The white shirt made her temperament more pronounced. It made her whole figure looked like she was going to shine, but she was beautiful no matter what. It was just she often didn't know it.
Jiang Yu scratched her hair, frowned and then stepped back. She got out of bed and came to the floor-to-ceiling window. With a "pop", all the curtains were opened.
"The weather is good today!" Jiang Yu said.
"Yes." Gu Shenliu stared at Jiang Yu’s back with deep eyes. Although Jiang Yu was not naked at this time, she had a different kind of seductive sexiness. This sexiness came from her bones. Even if she dressed casually, she could still exude that kind of different charming taste. Didn’t she realize that wearing his white shirt and dangling her bare thighs in front of him was really a provocation?
Gu Shenliu suddenly felt like he missed winning 100 million last night. The corners of his mouth twitched, and he smiled.
Gu Shenliu suddenly realized that Jiang Yu was not necessarily the most beautiful girl in the world, but she was the most beautiful in his heart. He narrowed his eyes slightly, beckoned to Jiang Yu, and said in a low voice, "Jiang Yu."
"Um?"
"Come over."