——Dada, I've been wearing these shoes for a week and the shoes really don't hurt at all.
——To be fair, these shoes are really good, even someone like me who hates high heels has bought a pair.
——I went out with confidence and successfully captured the male god.
——I've been belly dancing in these shoes this week, and I'm still alive and well.
——This is a pair of shoes enough to go down in history! This pair of shoes solves the problem of high-heeled shoes causing pain and the design is very good. I can't believe that this is just a pair of shoes that I bought for a few hundred yuan.
Seeing this, Jiang Yu immediately forwarded the comment:
[Dears, the shoes really don't hurt, even dancing can be comfortable. These shoes were invented by a craftsman who has been making shoes for 30 years and someone who has always insisted on hand-made customization. We cooperated with him to make this batch of goods, so it can be said that if you buy it, you will most definitely wore its worth. In the future, when Jiang Yu's self-made brand becomes more famous, the price may be directly doubled.]
——Fortunately, I bought it early!
At the same time, "Fashion Fashion" commented:
[This is a pair of shoes that can refresh your three views. The invention of this pair of shoes can even go down in history. This technology solves the pain point of high-heeled shoes, making high-heeled shoes no longer something that makes people hurt. We can get both beauty and comfort, is there anything better than this? From comfort point of view, the shoes produced by Jiang Yu are amazing enough, not to mention her design that could even compare to shoes for fashion week red carpet. Everyone can enjoy the same design as the star Su Ye for less than 500 yuan, why not?]
"Bazaar" commented: [Jiang Yu is not only a new designer! Looking at the Chinese design circle, there are very few all-round designers like her. She has done everything in clothing, bags, shoes, and even anti-acne skin care. Outstanding!]
...
Seeing that everyone's comments were very good, Jiang Yu was in a good mood. Today, when she came back from filming, she opened her Weibo and saw that many netizens mentioned her. Jiang Yu was startled, opened the post where many people mentioned her, but was caught in a terrifying set of pictures.
Open the first one, although the girl in the picture was not a great beauty, she had flat nose and thin lips, but because of her clean skin, she looked quiet and cute. But in the second picture, the girl now had double eyelid and a high nose bridge. In the third photo, the girl's forehead had been injected with hyaluronic acid and her facial skin looked shiny. At first glance, it looked like she was injected with some needles.

In the fourth photo, the girl filled her apple muscle and temple. In the sixth photo, the girl did a hyaluronic acid lip augmentation, which made her lips very thick and looked watery. In the seventh picture, the girl had raised her nose again. But perhaps because the doctor's skills were not good enough, the girl's nose bridge now looked awkwardly wide, which made her look a little bit like the blue alien people on the movie Avatar. When Jiang Yu opened the eighth picture, she saw that the girl used Botox to shrink her masseter muscle and fill her chin.
The more Jiang Yu looked, the tighter her brows became. Finally, when she looked at the ninth picture, she saw that the girl in the picture had turned into a totally different person. Because of the multiple injections, her face was now too bright and her nose was too high and wide. The large double eyelids and inner corners of her eyes make them look terrifyingly large even when she's not wearing makeup, and her chin was really too sharp. It was exactly the awl face that everyone said, poking with one swipe could kill a bunch of flies.
Jiang Yu thought that this was the face-changing history of some internet celebrity. She thought, although the post-face-changing internet celebrity didn’t fit her aesthetic, as long as the girl liked it, she could do anything she wanted. But Jiang Yu didn't expect that when she clicked on the girl's Weibo, she saw that the girl was crying all the time, saying that the boy she liked was scared away when he saw her.
After reading Weibo, Jiang Yu realized that the girl was not an internet celebrity at all, but an ordinary junior university student. The girl had a crush on a classmate in high school and even after three years of college he was still unforgettable. But the boy was very handsome, and the girl was not confident in herself. In order to make herself more beautiful, the girl went to inject hyaluronic acid. In just 2 months, the girl changed her face and became someone that her own mother might not even recognize.
Many Jiang Yu fans forwarded the girl's Weibo and asked her:
——Taro Ball, I think you should give a piece of advice to girls who are obsessed with plastic surgery. Because many of your fans are girls who love beauty, they often think that it's normal for girls who love beauty to want micro-plastic surgery. But, is micro-plastic surgery really not harmful at all? Is it suitable for everyone?

Because the girl's story had caused a great sensation on the Internet, it could even be said that it became uproar among the people. In order to chase a boy, the girl spent hundreds of thousands of dollars to become another person, but the crux of the problem was that she didn’t even like the result at all!
The girl cried badly because her crush was frightened by her and he even took the opportunity to run away. So far, she had not been able to contact him again.
Seeing this, Jiang Yu sighed. She had never been against plastic surgery. In her previous life, she even had shares in a plastic surgery clinic. However, these procedures had to be done with care and careful thinking. Thinking of this, she typed:
[I want to remind my fans that there is nothing wrong with loving beauty as everyone has the right to pursue beauty. But you must know that plastic surgery is a very addictive thing. So before plastic surgery, you must have a basic understanding of yourself. Generally speaking, plastic surgery and beauty follow a certain desire. At the beginning of plastic surgery, if you think that you only need to do simple change to a certain part to make a big change in your appearance, such as eyes, nose, or other parts, then later, even if the changes brought by the first plastic surgery are higher than you expected, you should remind yourself to stop. Because the changes brought by more cosmetic surgeries would be very minimal and it might even bring bad results like a decline in appearance. Also, I hope everyone goes to a legal and trusted hospital for plastic surgery. Don’t believe in the so-called beauty studios on the Internet!]
——Thank you for reminding me. You are right!
——Jiang Yu, I love to hear what you say. You speak pertinently.
——Dada, I want to ask you, I want to use hyaluronic acid for skin rejuvenation but I am afraid of pain, is there a way to introduce hyaluronic acid without injections?
Seeing this comment, Jiang Yu thought about it and replied:
[My dears, I have recommended beauty equipment for everyone before. You just need to use beauty equipment for some time and your skin will gradually become very good. Secondly, I recommend a product to everyone, Dermaroller skin roller needle. There are many micro needles on it. Apply the brand's hyaluronic acid and then roll on the face with micro needling. Roll it until it becomes red and then apply the hyaluronic acid again. The next day, you will find obvious changes in your skin. This product is suitable for those who dare not inject hyaluronic acid. Some people did light injections and spent 20,000 yuan but might not even see obvious effect, so you can try this instrument instead. This method can directly introduce hyaluronic acid without injection. Use it 3 times a week and your skin will get better.] 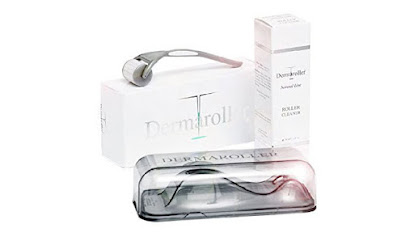 Below, Jiang Yu also included a selfie picture. To be honest, her current young skin didn’t need to use this kind of thing at all, but she often stayed up late recently, so sometimes the skin care couldn’t be absorbed well, at that time she would use Dermaroller once. Looking at the densely packed micro needles on the roller, Jiang Yu sighed when she needed to use it every time. Pursuing beauty was really not easy, it was simply self-abuse! Things like rolling needles to the face... how could she say it? If someone ever stabbed her face with needles, she would probably slap them to death, but now she stabbed herself intentionally.
Soon, there were many comments below the post.
——Go to search and it refreshes my world view.
——Why do you women think so hard?
——To be honest, I don’t dare to take hyaluronic acid injection. It looks so painful.
——Dada, I bought the hyaluronic acid from this store, it is white, is it normal?
Jiang Yu replied: "The color I bought is yellowish."
The next day, the leaders of Dermaroller Group were shocked. Dermaroller micro needle rollers and hyaluronic acid set were not cheap so they were not very popular in the past, but suddenly they were sold out in all stores overnight? What happened? What's wrong? Who did this? Why was it so hot all of a sudden?
When they knew that theproduct was recommended by a blogger far away in China, in which directly caused the production of their group to fail to keep up with the demand, they realized that the purchasing power of the Chinese was more powerful than they thought!
…
At the same time, with dark circles under his eyes, Gao Jing asked complainingly: "Gu Shenliu, you really forget your friends! You let me drive hundreds of miles of mountain roads overnight just to rush back to see Jiang Yu?" This kind of behavior was simply insane!
Gu Shenliu glanced at Gao Jing and said lightly, "Get out of the car!"
"Get off? Why?" Gao Jing was simply blown away. This inhumane man! He actually asked him get off here in the middle of the night, was he still a human?
"Just for Jiang Yu, you don't even want me anymore?" Gao Jing was like an abandoned puppy. He almost wiped his tears with a white handkerchief.
Gu Shenliu never said anything about things that could be solved by force, so he kicked Gao Jing out directly.
"Hey! Gu Shenliu! You crazy man! Are you not afraid of paparazzi following you when you visit Jiang Yu in the middle of the night?"
Gu Shenliu turned a deaf ear. When he parked his car at the gate of Jinghu Garden, Jiang Yu also happened to come out.