President Chen was very confident that Jiang Yu would definitely agree to the price. If nothing else, 1 million per episode means that a 30-episode drama could gain 30 millions, which was already a good figure. The investment in online dramas was small and the popularity was low, to be able to sell at this price to a website, what else would they want? He was sure that a newcomer like Jiang Yu would definitely agree. After all, Aiqiqi was a leading video platform in China.
"1 million?" Fang Huai was so excited that he looked at Jiang Yu in disbelief, his eyes lit up: "Jiang Yu, 1 million! Someone is willing to pay 1 million to buy our drama!" To be honest, Fang Huai felt that it would already be good if someone wanted the drama. Although Gu Shenliu was the lead actor, he himself was not very famous as a director after all. It would already be nice if he didn't lose money on his first filming, so he never expected to make a lot of money.
Of course, Fang Huai thought that Jiang Yu must be the same as him.
Who knew that Jiang Yu raised the corners of her lips and smiled lightly: "1 million? Is President Chen fooling me?"
President Chen was stunned, Fang Huai was also stunned. What? Jiang Yu was still not satisfied with this price? 30 million! This was not cheap!
But they heard Jiang Yu continued to say: "President Chen, although the cost of this drama is not high, it is entirely because of own effort that we managed to save money. In 2016, the remuneration of first-line actors has increased by 250%. A super-first-line actor like Gu Shenliu will require more than 50 million for one drama. Although I am not a celebrity, if someone want me to play the female lead in a drama, it is also impossible to give low price. Aside from these, we have to spend tens of millions for the costumes in our play, that is to say, our level similar to general IP drama with hundreds of millions of investment. Not spending this money does not mean that our things are worthless, it can only prove that we are good at saving money."
"You should know President Chen, this drama is not broadcast yet but many fans are already looking forward to it. Many video websites are also approaching us. Although it is a web drama, the purchase price of this drama should almost be the same as that of TV drama. With the current hype, you will definitely not lose money!"
President Chen was stunned for a moment. To be honest, today he saw that Jiang Yu did not bring a professional person to talk, so he made up his mind to lower the price. Who would have known that Jiang Yu had such a big appetite? The young girl still thought that 30 million was too little.
"Then how much do you charge?" President Chen asked.
Jiang Yu hooked her lips and smiled lightly. She suddenly said: "Baike Video's offer is 1.5 million per episode, so we are still thinking about it!"
"1.5 million?"
President Chen's face went dark. Yes, the price of web dramas was rising now. It was a small matter to spend tens of millions for each. But video sites spend too much money to buy dramas every year and they often lost of several hundred million. Aiqiqi lost more than 300 million last year, so this year, they intended to lower the price, and decided to not buy dramas that were too expensive. However, the production of <The Entertainment Circle of Chong Fei> was too good and sophisticated, so it should be well-received. Also, there was Gu Shenliu’s name to guard the battle. If they didn’t buy it and let the opponent go, Aiqiqi would lose a lot. In case the drama went popular, it would be easy to gain 100 million yuan turnover.

Thinking of this, President Chen gritted his teeth: "Miss Jiang, the 30-episode TV series includes all kinds of edited videos and behind the scene videos for a package price of 60 million!"
Jiang Yu knew that there were many web dramas today, so it was already a sky-high to be able to get this price. Thinking of this, she nodded and smiled: "Okay! Deal!"
…
Zhong Xiaoping was Jiang Yu's newly recruited assistant. She couldn't believe just by sending a private message to Jiang Yu, Jiang Yu really asked her to apply for the job to become her assistant. Jiang Yu taking her, she naturally was happy.
Zhong Xiaoping watched Jiang Yu work from the side and only felt that Jiang Yu was going at her own pace and didn't pay attention to President Chen at all. President Chen clearly had a strong aura and even she felt very scared when she looked at him, but Jiang Yu could negotiate with such confidence?
"President Jiang, you are amazing! You actually doubled the price!" Zhong Xiaoping said.
"It's not that I'm good, it's just that 2 million is President Chen's top price. This is how business is done. Everyone will have an estimate in their hearts. If they talk in this range, they can naturally negotiate." Jiang Yu smiled.
On the other hand, Fang Huai, after stepping out of the elevator in the building, had yet to react. He asked with a confused expression: "Jiang Yu! Is this real? Pinch me so that I know if I'm dreaming! Such a high price? President Chen won't go back on it, right?"
"What go back! It's basically a sure decision!"
"Ah... I feel like I'm dreaming!" Fang Huai said dreamily.
The two went out and saw a BMW X5 parked at the door. A man got out of the car and said to Fang Huai: "Fang Huai, your show has been sold? Has anyone bought it?"
"Che Cheng?" Fang Huai saw his roommate asking this question and wanted to tell him about the high price gained by Jiang Yu. But the contract had not been signed, so it would be bad if something changed. Thinking of this, he smiled and said, "We are still talking about it…"
However, after hearing these words, Che Cheng felt the drama was 90% not sold. He smiled narcissistically: "My dad knows a lot of people. I'll ask him to ask some people for you another day."

"Thank you, Che Cheng." Fang Huai said reluctantly.
At this time, Che Cheng's eyes were on Jiang Yu, and he said enthusiastically: "Miss Jiang, I'm Fang Huai's roommate, I'll take you back!"
Jiang Yu glanced at him and refused, "I'll take a taxi back by myself!"
"Oh! Let's go! We are all friends!" Saying that, Che Cheng forced Jiang Yu into the car.
Jiang Yu didn't like being touched, so she avoided it skillfully, but in the end she was still pushed in, so everyone had to agree.
Che Cheng didn't ask where Jiang Yu was going and drove the car directly onto an elevated road. 20 minutes later, the car stopped at the entrance of an auto trade store.
Jiang Yu frowned and looked at Fang Huai, both saw puzzlement in each other's eyes. "Che Cheng, why did you bring us here?"
Che Cheng smiled, glanced at Jiang Yu, and said flatly: "Miss Jiang, please wait for me. I passed by here today and suddenly remembered that my car is old and I want to change it. Why don't you accompany me to choose one?"
Zhong Xiaoping pulled Jiang Yu and whispered, "Taro Ball, oh, no! President Jiang, this man wants to flirt with you!"
Jiang Yu glanced at the girl and asked, "Do you think I'm interested?"
"..."
The group entered the auto trade store. The boss seemed to know Che Cheng and came over enthusiastically. Che Cheng brought Jiang Yu directly to a Maserati, pointed at the white car in front of him, and smiled slyly: "Miss Jiang, what do you think of this car?" 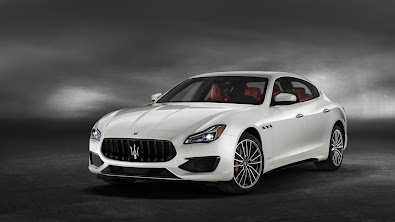 Jiang Yu glanced at the car and answered honestly, "Not bad."
"I think it's good too! Which one does Miss Jiang like? I'll buy the one you like." Che Cheng pointedly said.
In fact, ever since Che Cheng met Jiang Yu for the first time, he had been very fond of the girl. She was beautiful and had a body that was just in line with his taste. He wanted to get close to Jiang Yu, but Fang Huai blocked him and never let him visit the crew. In addition, he himself still had a girlfriend who was pestering him, so he didn't have the heart to really chase Jiang Yu. He finally kicked his girlfriend recently, so he came to find Jiang Yu right after!
Che Cheng didn't expect that in just a few months Jiang Yu had become more beautiful! Looking at Jiang Yu's bulging upper circumference and slender long legs, he only felt itchy in his heart. With such a figure, she would be very good to play with! Che Cheng was lustful in his heart.
Che Cheng’s straightforward gaze made Jiang Yu feel offended, she frowned and felt uncomfortable.
Even Fang Huai noticed something was wrong. He asked with a frown, "Why are you buying a car but asking Jiang Yu?"
Che Cheng laughed and said to Jiang Yu: "Miss Jiang, I've always been generous to my girlfriends. For the girlfriends I used to be with, I would always give them a brand-name bag, a car, or something else. I am actually buying this car for my girlfriend to drive." Letting Jiang Yu choose the car by herself and clearly saying that he was buying the car for his girlfriend, if the girl didn’t have enough self-control, she would have been won by Che Cheng long ago.
But was Jiang Yu this girl? She snorted coldly, as if she didn't understand Che Cheng’s words at all. She suddenly asked the sales lady: "How much is this car?"
The sales lady looked at Jiang Yu for a moment and said truthfully: "About 1.4 million."
"Oh." Jiang Yu didn't blink.
When Che Cheng saw Jiang Yu’s inquiry, he immediately became excited. Since she wanted to ask the price, she must have liked this car. It seemed that he had succeeded as usual! Thinking of this, he said attentively, "Miss Jiang, both the red one and white one are good. Which color do you like? I'll buy it for you!"
Jiang Yu glanced at Che Cheng and suddenly showed a saint like smile.