The two hadn't seen each other for a long time. After Jiang Yu got into the car, Gu Shenliu slightly curled his lips and gave her a meaningful look.
Jiang Yu was shocked by the sight. The two chatted along the way, but Gu Shenliu didn't talk much, just his eyes kept staring very deeply, which gave Jiang Yu the illusion that something big was going to happen.
On the way to Xiang Song Garden, Gu Shenliu's car began driving zigzag on the road. At first, Jiang Yu felt strange. She always felt that changing lanes at will was not Gu Shenliu's style, but seeing Gu Shenliu looking defensively at the rearview mirror, she understood that they were followed by the paparazzi.
"What to do?"
"I'll get rid of them." Soon, Gu Shenliu speeded up, and when he passed the intersection, he caught up with the tail of a red light and completely left the following car behind.
Falling in love but acting like a thief. Every time they went out, they had to be fully armed. They also didn’t even dare to go to the movie theater. Jiang Yu was a little worried, "What if we get photographed?"
Gu Shenliu smiled lightly: "What is wrong it we do? You are not married, I am not married, and we are not joking. Since we are serious in love, so what if we are photographed?"
Gu Shenliu’s attitude had always been very clear, but Jiang Yu seemed to be a bit hesitant. She didn’t want this matter to be made public, she didn't want her name to be suffixed with Gu Shenliu's name, and didn’t want to be chased by paparazzi wherever she went with the headline ‘Gu Shenliu's girlfriend Jiang Yu’.
However, seeing Gu Shenliu’s attitude, Jiang Yu suddenly smiled, her mentality now was obviously the mentality of the weak, right? If she was strong enough, would she care about what others think? Furthermore, she and Gu Shenliu were both working hard in their own fields. Gu Shenliu was an actor and she was also a very good designer. Just because Gu Shenliu was famous, she should not be afraid and take a step back instead. She was indeed Gu Shenliu's girlfriend and they were both serious in the relationship.
Thinking of this, Jiang Yu was calm, a big stone in her heart suddenly fell, even though the paparazzi car still following them, she didn't feel panic. "That's right, just let them be! What am I afraid of!"
"Not bad!" Gu Shenliu touched Jiang Yu’s head with a doting smile on the corner of his mouth: "I haven't seen you for a few days and you've grown up!"
"Let go!" Jiang Yu swatted Gu Shenliu’s hand.
Both of them laughed, and there was a kind of warmth in the car.
…

Soon, the car arrived at Xiang Song Garden and the two entered the house. Gu Shenliu pulled close all the curtains, and without looking, took Jiang Yu's hand directly to the second floor.
"Hey Hey hey……" Jiang Yu pushed Gu Shenliu away, but Gu Shenliu grabbed her and pulled her into his arms.
After finishing the kiss, Gu Shenliu stared into Jiang Yu’s eyes until she had nowhere to hide. He said, "Did you miss me?"
"It's alright." Jiang Yu shrugged, looking a little heartless.
Gu Shenliu chuckled, grabbed Jiang Yu’s ass with one hand, and wrapped her legs around his waist. He said punitively: "Well, then I will show you how much I do!" After speaking, he rolled over and threw the woman on the bed.
Jiang Yu's hair spread out on the bed and her body bounced on the mattress.
Gu Shenliu pressed over immediately, he put all his weight on Jiang Yu and stared. Habits were a terrible thing. In the past, he was single and he had no other worries in this world except his parents and relatives. In the past, he even contemplated suicide because of his ear problems. But after Jiang Yu, Gu Shenliu realized that it would be too long for him to not see her even for a day. As for this world... with her now, how could he be willing to leave!
Gu Shenliu hugged Jiang Yu, smelled the fragrance on her body, and felt an unprecedented calm.
Seeing this, Jiang Yu coughed and teased, "Mr. Gu, isn’t a certain part of your body too alert?"
"This is proof of recognition to your charm." Gu Shenliu's expression remained unchanged and he still pressed his hard part on Jiang Yu's body.
The two looked at each other for a moment, then came together again, their lips touching and their tongues intertwined.
Gu Shenliu looked at the woman under him and felt that her whole body was made of cotton. She was tender and soft, but it was still not enough. He hugged her directly, twisting her body into a weird arc, and possess her.
The collision again and again made Jiang Yu almost fainted. Gu Shenliu was always like this, if he thought she was not tossed enough yet, he won't give up, but she also enjoyed and complained at the same time. Her usually calm mind could also be distracted when such things happen.
Jiang Yu was pulled back to her senses, and then Gu Shenliu bent down punitively, twisting her into an embarrassing pose.
"This is punishment for wandering!" Gu Shenliu said.
Jiang Yu was tossed by Gu Shenliu again and again. A certain man, who now knew the taste of meat, how could he still be vegetarian? So, feasting on her, eating her whole body, and declaring his possession, was in line with the style of a male animal!
When the two finished, Gu Shenliu picked up a cigarette from the side and lit it. Among the smoke, he squinted and stared at the girl in front of him. 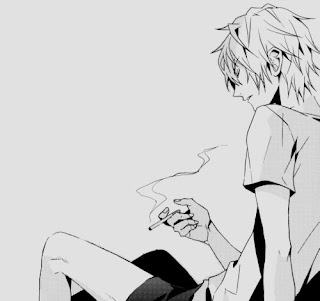 Jiang Yu grinned, took the cigarette from Gu Shenliu’s mouth, and took a puff herself.
"You smoke?" Gu Shenliu asked.
"Yes, but not often."
Gu Shenliu said nothing, saw the cigarette on her lips, squinted and watched Jiang Yu take a sip before stuffing it back into his mouth.
Jiang Yu suddenly remembered what Bei Xiaoxiao said, and asked curiously: "By the way, your company's public relations are very professional, and you should have hired a lot of navy, right?"
"Huh?" Gu Shenliu frowned.
"I heard Bei Xiaoxiao said that you haven't had any girlfriends since your debut! It's impossible when I think about it."
Gu Shenliu smiled but not smiled: "So, you turned a hundred turns just to ask me if I've ever had a girlfriend?"
"No, it's not whether you have or not, but how many?" Jiang Yu smiled. She didn’t care about this kind of thing. In fact, for an adult, digging up a man's love history was as unpleasant as digging a grave, and she's not a self-inflicted unhappy person. She asked purely out of curiosity.
Gu Shenliu, who had always been unsmiling, seemed to be in joking mood: "Mrs. Gu, I dedicated my first night to you, so you have to be responsible to me."
"Ha!" Jiang Yu finished and covered the quilt, "Haha, this is the funniest joke I've heard this year, huh, good night!" After she finished speaking, she waved her hand and declared her disbelief.
Gu Shenliu's brows were furrowed, the meaning of his eyes was unclear, but there was a look similar to sadness on his face.
…
By the end of April, <The Entertainment Circle of Chong Fei> was all wrapped up. The crew held a simple dinner and everyone took a group photo. Gu Shenliu, who had already finished shooting, also arrived. Fang Huai was so happy that he dragged a few leading actors to chat a lot.
Everyone had spent several months together, and they were a bit reluctant to part at this moment. So, everyone took pictures and took photos together, they were so busy that they didn't finish their meal until midnight.
It was difficult for the drama to pass the review, so Jiang Yu withdrew the application to TV stations and broadcast it directly as a web drama. Several major video sites had been sending people to contact them, especially Aiqiqi Video. After watching the first two episodes that have been finished, they set a high price to let the drama be broadcast in Aiqiqi. .

In the end, Jiang Yu and Fang Huai calculated the general ledger. Because Gu Shenliu appeared in the drama as a family member of Jiang Yu, Gao Jing had been unwilling to collect money. Therefore, the biggest part of the actor's expenses was saved, and Jiang Yu, as an actress-producer, of course no fee was also charged. The other leading actors were not well-known and their prices were very low. College students like Yuan Wei, after knowing that the protagonist was Gu Shenliu, asked to join the group without pay, although Jiang Yu still gave some salary as a token for everyone, but it still saved a lot of money for the crew.
In addition, the clothes were made by Jiang Yu’s Company. The designers were all from her studio or her classmates. The cost of making clothes was very low and the famous brand bags, shoes, and mobile phones were sponsored by Kafan. These also saved a lot of money for Jiang Yu.
That was to say, this drama was filmed almost without spending any money at all, but Jiang Yu required excellent production. In the end, the 30-episode drama only needed around 2 million. She was still very satisfied with this figure.
When it came time to negotiate the price, Aiqiqi saw the quality of the drama and their eyes were almost straight. Xiao Qu, who was in charge of communication, directly said to the leader: "It's better than the production of popular Korean dramas! It's like a movie. The bags, clothes, and shoes inside are all designer brands! Even when a street sweeping auntie appeared, she looked like she was walking the catwalk!"
After watching the sample episodes, the leader directly instructed: "Do whatever it takes to win this drama!" Even if the content was trash, having Gu Shenliu and Jiang Yu were enough for the drama to be talked about.
So, Aiqiqi President Chen said proudly: "That's it! One million per episode!"