——What's the situation?
——I don’t know, how come there are new products in our store? Why would we choose to release on the first day of the first lunar month?
——I just saw it too, oh my god, if I hadn’t accidentally logged into the customer service number, I wouldn’t have known that there are new products.
——It's terrible. There is no customer service, so everyone just buy blindly?
——President Jiang didn't inform us. So, Jado's new products in this issue have been released?
As soon as Jiang Yu went to WeChat, she saw many customer service staffs in the company group discussing, and some people mentioned her, Jiang Yu said: "It's not new year in Italy so new products have been launched long ago. I asked Jado to send the pictures first to do a pre-sale and then send the goods to customers when they arrive. You are all on holiday and I didn't want to trouble everyone. Xiao Zeng made the details of the products clear enough, so the customers can shop by themselves."
——I thought I entered fake Taobao.
——The crux of the problem is not this, but... I want to buy it too! ! ! President Jiang, I didn't see your Weibo post. To be honest, I really like one of the drum bags. I also wanted to buy it, but I didn't expect it to be removed already.
Jiang Yu raised her lips and said, "If someone can't wait for the delivery and ask for refund, you can keep it."
——Yes, pre-sale items generally has high chance to get refunded, so I will wait for the return!
Jiang Yu opened Taobao backend and checked the sales number. Most of the bags she and Jado cooperated with were priced at 2000 to 3000 yuan. Only one with special materials reached a high price of 4,000, and she did not put too much on it for sale. Generally, the quantity is controlled within 1000. Some bags with more complicated production process, because they had to be made by hand, only pre-sold around 200 pieces. Even though she had already controlled the sales so much, she did not expect that in the end there were still nearly 30 million in sales for the bags only.
Staring at this number for a long time, Jiang Yu didn't believe that the money would come so quickly. She didn't tell anyone about her having a share in Jado, not even the employees of the company. Jiang Peifen, who helped her promote, even really thought it was just collaboration between her and Jado, but Jiang Yu really knew that a considerable part of the profit in this sales was her own.
After turning off the phone, Jiang Yu only felt that her life after rebirth was going too smoothly. Even though she had a successful career in her previous life and she also did it all by her own strength, but she didn't expect that in this life, she could gain so much more with much less effort. Many things that she thought were difficult to accomplish in her previous life could be easily solved by her posting on Weibo.
Jiang Yu directly gave Jia Xing a screenshot of the Taobao backend.
"Jiang Yu, is this real?! You sold so many bags?" Jia Xing's eyes were about to fall. The series of numbers on the picture were really the pre-sale of the new bags?
"It's not too much. Because it's a pre-sale and the stock is limited, many people didn't grab it. We have to enter Tmall as soon as possible so that sales can go up!"
"You're right! The purchasing power of your Chinese people is really scary! It's scary to see how many treasures on Tmall that sold hundreds of thousands of pieces a month!"

"The review for entering Tmall has come down. Next, we only need to settle the service fee and the annual fee. After the review is completed, the products can be released."
"You Chinese are so efficient! Okay, I'll leave this to you. I'll supervise the factory to ship the goods well!"
Jiang Yu thought about it and said: "When Tmall settles in, the scale of the factory will definitely not keep up. You should consider expanding."
"I think so too. We will discuss the specific matters together after I have planned them."
"Sure. But, send the sample package to me first!"
"Are you in such a hurry?" Jia Xing was a little puzzled. Anyway, things were already selling so well, so why rush? It would be better to pack and send it together with the customer's package.
Jiang Yu explained: "You don't realize that I rarely wear clothes from other brands? Since I cooperated with Jado, I also rarely carry bags from other brands."
"Ah?" Jia Xing scratched his head. He really didn't realize this. "So, you mean to send you the bag early so that you can advertise for Jado?"
Jiang Yu smiled: "That's right! When Chanel started selling hats, Chanel wore hats on her head every day and even persuaded her friend Irina to wear them often. They wore them for a long time until other ladies and nobles suddenly got the beauty of wearing a hat, so they asked Chanel and began to buy it one after another, which also allowed Chanel to open up the hat market. As your partner, I naturally have to carry our bags on my body often. In this way, even customers who didn't plan to buy it will see the charm of the bag when they see me using the same bag to match different clothes. These subtle influences are still effective."
"Understood! I'll send it to you right away!"
…
At this moment, Jiang Yu received a call from Su Ye.
"Hey, taro ball! You are so bad!" Su Ye said immediately.
"Huh?" Jiang Yu closed the phone and asked with a smile, "What's wrong with me?"
"You didn't tell me when Jado released new bags, so I didn't manage to buy any. Your design in this issue is really good. There is one particular a blue-and-white bag with porcelain like handle that is great, especially in the white background. It really amazes me!" Su Ye praised Jiang Yu sincerely. 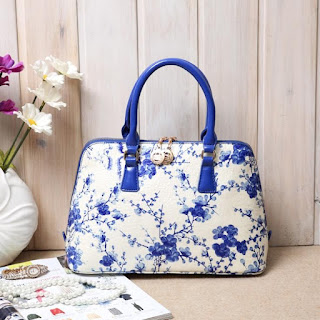 Jiang Yu said with a smile: "Yes, it is a new attempt for me to use blue and white porcelain to design bags. Judging from the customer's response, this design is very well received and non-Chinese customers also like it!"
"Yes, just like Chanel's chain bag, no one would have thought that this bag would be popular for half a century at the beginning. Fashion indeed has to be tested by time!"
"You're right!" After Jiang Yu finished speaking, she walked out and said with a smile: "When the package arrives, I will send you a few."
As a best friend, Su Ye would naturally not be polite to Jiang Yu, and besides, she often helped Jiang Yu to promote on Weibo. "Then I won't be polite to you! Mmm!"
Jiang Yu smiled and hung up the phone. She was so busy that she didn’t realize it was almost noon and she had not eaten breakfast. She came to the kitchen and saw a pot of porridge in the middle of the kitchen table with a blue sticky note on the lid. Jiang Yu took off the note and saw: "I'll go out for a while. There is porridge in the pot and boiled eggs in the counter. Just eat this first and wait for me to come back."
Gu Shenliu's writing was very dashing and the words was neat and tidy, which showed that he was a person who did things decisively and didn’t slack off. Jiang Yu's handwriting was also good, but unfortunately it was not as good as him.
Gu Shenliu’s handwriting had a kind of self-contained feeling. Jiang Yu couldn’t tell which font it was, but he had his own style. His handwriting was very mature and she could imagine that when he was in school, he could even write family reports on behalf of the teacher.
Jiang Yu filled a bowl full of porridge, but just after taking a few bites, she heard the sound of the door ringing. She was stunned when saw a familiar face that she hadn't seen in a long time appeared in front of her.
"Gao Jing?" Jiang Yu was stunned for a moment. She hadn't seen him for a while. Speaking of which, it seemed that since Gu Shenliu decided to play her online drama, Gao Jing disappeared without a trace.
Gao Jing was stunned when he saw Jiang Yu, and then said in surprise, "Jiang Yu?" He glanced at Jiang Yu's clothes and realized that Jiang Yu stayed here at night.
"Gao Jing, where have you been recently?" Jiang Yu was a little puzzled.
Speaking of this, Gao Jing was so angry that smoke rose from his head. He gritted his teeth in hatred, and said: "Don't mention it! Gu Shenliu, that guy, sent me to take an artist to participate in a competition variety show in the United States. I naively took the artist there, so I didn't hear that that guy was making a mess here, he even take an online drama! I was so angry that I almost cursed!"
Hearing this, Jiang Yu coughed. She always thought how could Gao Jing agree to Gu Shenliu lowering himself to film her drama.
"Gu Shenliu, this black-bellied guy! I'm so pissed! I can't wait to hit him up with a balloon!" Gao Jing gritted his teeth.
As the two were talking, the door opened again and Gu Shenliu appeared at the door.
"Gu Shenliu, I said, why did you suddenly think of filming a web drama? If Jiang Yu wants a good actor to play, I could arrange someone for her every minute, do you need to play it yourself? The two of you are in love and filming together, are you determined to abuse single dogs like me?" Gao Jing asked angrily.
Gu Shenliu glanced at Gao Jing and then said quietly: "Gao Jing."
"You said something! I'll hear how you explain it!"
"You want to keep the abuse yourself?"
"..."
"You think it is better to be abused alone compared to be abused together with a crowd? Jiang Yu and I went to abuse the audience!"
This made a lot of sense. When Gao Jing thought that after the relationship between the two was announced or they got married, a bunch of fans who understood the truth would look back at this drama. At that time, tears and snot would fly together. Thinking of this, Gao Jing couldn’t be unhappy. He suddenly felt that he was nothing at all! "In short, if you dare to stick a knife behind my back in the future, be careful I bite you!"
Gu Shenliu snorted coldly, glanced at Jiang Yu again, and said, "Jiang Yu, I'll show you a place!"
…