By the time the news aired, it soon became clear that the prices of meals at various restaurants would soon drop.
——The citizens are really happy today~
——The year-end bonus is enough to eat three meals? Happy!
——Can I finally go to a restaurant on a date with my boyfriend?
——The goal of taking my mother to a five-star hotel can finally be achieved this year!
——I didn't expect that I would be able to see such a day in my lifetime.
The bullet screen on the news quickly blocked the face of the announcer. They didn't even care about the social headlines that follow, the only important thing now was to eat.
While everyone was looking forward to it, many young people, especially those who were about to graduate from high school, had found that this year's list of schools had an additional vocational school - the Interstellar Alliance Culinary School.
The profession of chef used to have an astonishing tuition fee, which was not a profession that ordinary family children could imagine. But now everyone looked at the tuition fee, it was even cheaper than ordinary schools, and there were also government subsidies.
Many people had mixed feelings.
People with high grades who were not able to pay high tuition now have a new place to go; and those who could not learn cooking before immediately signed up happily.
And the feelings of most of the local chefs of the Chef Association were very difficult to describe. The high tuition they paid back then was like a joke now. Overnight, it turned out to be worthless.
Originally, they wanted to laugh at the unreliability of the culinary school, but then they found that this school not only had the endorsement of the Education Bureau, but also Liu Weiwei's name. The people, who might not know who Liu Weiwei was, also saw the relevant introduction in the school brochure.
Special-grade cooking soldier of the First Army Regiment in the Eastern District. The founder of the cafeteria of the First Army Regiment, the operator of the cafeteria of the First Military Academy, the researcher of the military ration project, the inventor of several well-known snacks, participated in the war against the beast wave and the training program of the beast, and was someone awarded a Major rank by the President due to many level of honor.
In addition to the memorabilia introduction, there was also a professional introduction to the school. Eight major Chinese cuisines, Chinese pastry chefs, Western food and pastries...

What surprised and envied the Chef Association even more was that there was also a long lecture content in the notes, a full menu of more than ten pages, and finally ended with the word 'abbreviated'.
…
Sang Long hadn't surfed the Internet for several days. He woke up with a headache almost every day, but he had insomnia and couldn't sleep all night long. This publicity e-booklet was shown to him when his subordinates reported. By the way, there was also the internal forum of the Chef Association, which exploded with screenshots of the new culinary school.
——I paid 1 million and only learned six and a half dishes! This school has a tuition fee of 5,000 a year and can learn more than 200 dishes. Are you kidding me!
——Upstairs, you're not the worst. I spent more than 30 million and I haven't learned as many dishes as the first page of the booklet... I heard that this is only a semester worth of Sichuan cuisine course arrangement?
——@Finance Office, big brother, don't say anything, refund money!
——@Administrator, everyone has come to my restaurant these days to ask when the price will be cut. Lower the price of seasonings right away!
——@President, what's the situation? What's the situation!!! I invested all the money for marrying a wife into the association but now you tell me that normal tuition fee is only 5,000 yuan!!!!
In the Chef Association forum, it was a mess. If people looked closely, all posts contained scarlet letters and mentions.
Sang Long was terrified, covering his head, almost knocked on the table.
"Vice President, what should I do? Now everyone is calling and sending messages to ask. The people in our consultation office work overtime every day to comfort them, but they can't stand it anymore!" The bald man who came to report also felt that he had become old overnight. "Nearly 200 people asked for tuition refunds yesterday, saying they didn't want to study anymore, so the money for the recipes should also be refunded!"
Sang Long felt extremely tight in his chest and his eyes burst into flames when he heard the words, "I've taught them all, what tuition refunds! Are they robbers?"
The corner of the bald man's mouth twitched, "People now say that we are robbers..."
Sang Long slapped the table, "The tuition was already so expensive a hundred years ago! At that time, they were willing to let go, but now they resist? No way!"
"But they said they were going to call the police, saying that we cheated money, and the price was unfair." The bald man was annoyed, "Yesterday, our department also received a blade in the mail... It was blocked but it asks us to refund the money and only give us three days."
"What three days!" Sang Long was about to go crazy, "Who among them all not recover the money spent! One by one, how much money have they made from opening a restaurant in recent years? How could they come and ask me for a refund!"
The bald man gave Sang Long a complicated look, his lips moved, but just as he was about to speak, he was forced back by Sang Long's outburst.
Almost all the capital of low-level chefs was deposited in the chef association. In just ten years, they couldn't even think about turning over and recovering the capital invested.
Although there were many super chefs in the association, and there were many chefs who were full of oil and water, but there were more chefs who had not yet passed the difficult period.
In particular, many chefs who had just pooled money to pay for tuition or the recipe money, saw Liu Weiwei's culinary school promotion, and this made them really doubt life. It's like a market investment that had been deliberated and eventually turned into a bamboo basket to draw water, it's all in vain.
Sang Long scratched his neck, "When the cooking school opens, maybe the cost will be higher than ours? If the brochure says 5,000 will it really be 5,000 only? There must be follow-up charges!"
Sang Long sprayed his subordinates away and smashed everything in the office. But all his sternness and resistance seemed to be taken away after the office door was closed. After smashing various honorary trophies, he sat on the ground in a decadent manner.

The Chef Association was completely... finished. For thousands of years, the two things that they had relied on, seasoning and recipes, had all been lost overnight!
"Crazy, she's crazy, she's going to destroy the world..." Sang Long lost the light in both eyes.
...
Liu Weiwei, the lunatic in Sang Long's mouth, was also having a hard time. She quickly threw tantrums at home.
"Comrade Qin Mo, I want to take a bath, wash my hair, I want to open the window, I want to ventilate!" Liu Weiwei went into a frenzy while lying on the bed.
Qin Mo, who was standing beside the bed, patted her hand as if he didn't hear her, "Look at how well-behaved the girl is, she doesn't talk or make trouble when she sleeps~ Comrade Liu Weiwei, you have to learn from her."
Liu Weiwei turned her head and glanced at the cot next to her. The little girl who was wrapped in light pink quilt opened her mouth before opening her eyes, then closed her mouth and spit out a small bubble. With her pink and tender mouth, she squeaked twice, as if echoing her father's point of view.
Comrade Qin Mo's entire face immediately became extremely soft.
Liu Weiwei:  …
She was forced to do confinement at home. She was forced by Comrade Qin Mo, who was nervous for some reason. With the first child, he was still quite indifferent, mainly because he had to go out for training or assignments during the day, and only came home at night. But now, he was relaxed as if it was very effortless to educate mecha-type students. Basically, he went out for an hour or two every day and soon came back to stare at Liu Weiwei and his daughter.
In Liu Weiwei's mind, she had simply reached a state of hysteria. She could not even take a step away because Qin Mo was guarding every day, staring at them both. "I don't want to talk to you."
"Well, close your eyes and sleep for a while."
"Sleep again, am I a pig?!" 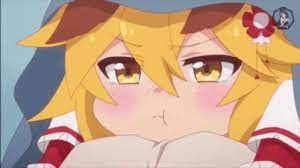 "It's okay, I won't eat your meat."
"..."
Liu Weiwei told him all kinds of things that showed scrict confinement was no longer needed with the high technology on Interstellar era.
However, after consulting an expert, Qin Mo actually combine the modern and antique principles by himself, which was simply too outrageous.
"Don't use water to wash your hair or take a bath, use dry powder. Maybe it's not good for your health. A few years ago, you said that eating Teonxing's cereal is good, but later it was found that the metal content exceeded the standard?"
"I just want to wash, otherwise I won't be able to sleep!"
"I'll tell you a story? Or do I need a pat to sleep?"
"..."
Comrade Qin Mo, who had more leisure time, became a devil-like existence.
Liu Weiwei collapsed and gave up communication.
The door creaked open, and Xiao Bei stuck his head in, "Is my sister awake?"
Liu Weiwei was about to cry, she looked at her smart and lovely son pitifully.
Xiao Bei came in followed by the tail Xiao Yue. The two of them were very friendly now and the older one often leads the younger one while walking.
"Mom, are you not happy?" Xiao Bei, who was just about to poke his sister's tender face, quickly noticed his mother's state sensitively.
"Mmmm!" Liu Weiwei nodded like a rattle, with the signal 'Save mother! ’
However, Xiao Bei pondered for a while, and without any hesitation, looked at Comrade Qin Mo who was beside him, "Chief, my mother expressed her unhappiness. Dr. Bu said she might suffer from depression..."
However, before he could finish speaking, Comrade Qin Mo intercepted the finger he secretly poked.
Xiao Bei suddenly puffed up.
"Tell your mother a story, don't poke at your sister." Comrade Qin Mo showed no mercy to his son, "She will cry."
Xiao Bei pursed his mouth instantly, showing a pitiful expression like Liu Weiwei. The fluffy little sister was so cute, but only Comrade Qin Mo could touch her in the whole family!
Even Xiao Yue couldn't touch his sister, Xiao Bai and Xiao Hei couldn't even get within five meters, wait no, they couldn't even come in the room! Xiao Bei never touched his sister again except when she had just been picked up by Doctor Bu and successfully poked her in the small mouth. "Dad, you are too domineering."
Liu Weiwei hummed in agreement with her son.
Qin Mo didn't even change his expression. He glanced at the mother and son, and then at the little Qin Yue who was holding Xiao Bei's clothes. His eyes softened, but he was firm. "It's time for Mickey Mouse broadcast, Xiao Bei, open up your light brain and let your sister listen to it."
"..."