He was a krypton beast, the only Level 10 beast left in the world. At the same time that energy was being controlled by humans, the living environment of beasts in the entire universe was constantly being eroded.
If it was impossible to seize more resources and drove humans out of the over-exploited planets, all the beasts would become extinct one day. He had a mission from birth, as if it was imprinted in his blood – to drive away humans.
He was powerful enough to command all beasts with wisdom and fighting power. He had been on his uninterrupted mission since the age of five to organize beast waves one after another and fight against humans. Until one day, a cunning man hid in the latest mecha, broke his wings and broke his tail.
He was imprisoned by humans, badly wounded, with only his last breath left. However, even if he fell, there were still thousands of beasts fighting against humans in order to survive. Even if he died, it would not prevent the outbreak of the next beast wave.
In his last years on the Scientific Research Bureau, he watched ridiculous scientists in white coats inserted countless tubes into him, tried to study his genes and blood, and even connected his brain waves to an interstellar power grid. There was no end to these researchers, he could only think that they were not far from their time of death.
They wanted him to reproduce, wanted to deconstruct him, and put his metal skin and indestructible teeth into weapon research. But krypton beasts represented violent destruction. To copy him was to copy a devil. 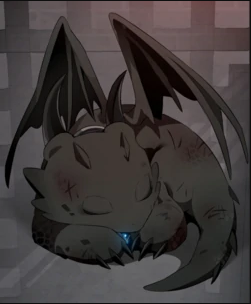 Humans were always stupid and full of dissatisfaction. His body was very painful and his little remaining vitality was constantly taken. To prevent him from escaping, they put steel nails on his broken wings and chained his entire body. However, his soul was now free.
Skynet, this was the human world he had never seen before. A Level 10 krypton beast could walk on the virtual street of Skynet, watching the human beings laughing on the road, how amazing!
The stupid scientist connected his brainwaves to Skynet and probably never thought that he would lie on a roof and watched a little girl dance. Never guessed that he would be in an abandoned garbage dump, and one food would save him.
That stuff, to be honest, really stunk. It fell from the sky, fell to the ground, and turned into a large pool of rotten things, which was a bit terrible. However, that stuff was delicious... He might have been bleeding too much to have this kind of hallucination.
For a while, he felt that the thing was extremely stinky and unbearable; but after a while, he couldn't help but get closer and closer, sticking out his tongue and licking it... As if his soul told him that it would be delicious.
He felt as stupid as a human at the time. But his tongue, which had long been dull due to the injury, unexpectedly tasted a gorgeous flavor that he had never experienced before. Just like that little human girl, giggling and turning her red skirt, gorgeous and beautiful... It's a taste that he didn’t know how to describe, but it's beautiful.
The language of beast was really lacking. He swore that even applying all the vocabulary he had learned to the food was too bland to describe the wonderful taste. In many beast wave, he had eaten human blood, which was actually too fishy to eat; he had also eaten human’s precious nutritional supplements, which was indescribably disgusting and sticky. In his own lair, he ate wood over metal, and it also didn’t taste that good. He ate just to live.
However, at this moment, he knew that food could be so delicious, and his aching body has a moment of relief and relaxation. Even the wound on his broken wings seems to have been repaired. He always thought he was going to die and he wanted to die too, but now, he was suddenly reluctant to... die.

He was going to survive! Only by surviving can he continue to taste such deliciousness! He felt that when his offspring cubs were born, he could fully let the cubs know how powerful their father was.
Every day, he recalled that smell. As a result, the god that stupid humans said was finally moved by his willpower, and sent her, the maker of delicious food, to him.
Her cooking saved him and the beasts. Of course, after being incorporated, he could no longer act recklessly. All stupid humans stared at him, as if they were monitoring criminals. But what does it matter? He could eat and drink and his cubs live well.
As for the silly rabbit that he couldn't help but threw down, he even ate fat under her entire fur, and it rippled when she was pressed down with his paw. Hey, forget it, the silly rabbit was happy.
He wished good luck to those monitoring him!
He was very happy now. If Qin Mo's big idiot could stop dangling in front of him all day, it would be even better.
When the other beast brothers know that there was no need to fight anymore, that they could enjoy delicious food after surrendering and being incorporated, that they could retire early and peacefully just like the two silly rabbits, everyone was relieved.
He lied in the garden every day to bask in the sun, listening to the cubs running on the lawn, watching the little masters staggering and learning to walk, eat a mouthful of snail noodles, chew a few chicken bones, and drink some come, it’s a beautiful day!
"Squeak!"
Ah, his silly rabbit was telling him to eat. Let's get some sunshine next time.
Boys, go with Papa!
What are we eating today?
Stupid! Of course, it is the snail powder in Papa’s story!
…
The author has something to say:
I will try to write another story about our male protagonist tomorrow. As a male with no sense of existence, he had really worked hard~