During Liu Weiwei's time at the military academy, she was most worried about two things. The first one was her youngest daughter Qin Xixi, who was beginning to show indication of being spoiled by General Qin Mo. Regarding the name of her youngest daughter, she fought for many times, but in the end she could never give up on Qin Mo and Xiao Bei's idea. From east to west, north to south, they wanted to get together like a table of mahjong.
"Mom, listen, Xixi... means happy, when I hear my sister's name, she looks very happy~ She will always be very happy in the future!" Xiao Bei used all his language skills to think of the name.
Qin Mo originally cared about everything about the little girl. Hearing such a good sign, he, an atheist, could not resist his son's bewitching. Qin Xixi, a decision was made.
Since then, the big and small men in the family had started the endless road of pampering their woman and girl. Liu Weiwei was simply unable to fight against them by herself.
When Qin Xixi could finally speak in a milky voice, Liu Weiwei's attention was finally turned to the second thing – the body of Xiao Bai. The school veterinarian had told her many times that the probability of procreation in advanced level beasts was very low. For example, krypton beasts, there might not be enough number to count in one hand in the whole world. They were strong in physique, and almost from birth they had no natural enemies and were not threatened. However, their numbers continued to decline.
Not to mention artificial breeding and cultivation, even in nature, the probability of krypton beasts giving birth to offspring was extremely low. It might even be less than one in 100,000,000. Otherwise, according to its status in the beast world, any female could be a member of its harem, as long as it pleases him. However, so far, scientists had never found any hybrid krypton beast in the wild.
So the school veterinarian couldn't understand Liu Weiwei’s concerns at all.
"Rabbits are impossible. The difference between their species is too great. If the krypton beast becomes its original form, the rabbit's body is even not as thick as its arm, how could they produce offspring?"
Liu Weiwei sighed, thinking that Xiao Bai was no ordinary rabbit. Every year, she took Xiao Bai and Xiao Hei back to the base veterinary hospital for a full-body examination. As a result, the veterinarians at the base said the same thing.
Liu Weiwei was afraid that if Xiao Bai gave birth to a mixed-race child, her life will be in danger. If the probability was very low, she was relieved for the time being.
…
Year after year, Qin Xixi also knew that she had to wear pink skirts every day, otherwise she would not go out. Jian Zhe took his goat to study for a doctorate in the College of Veterinary Medicine and went directly to the First Military Academy and became an honorable military veterinarian.
According to Xiao Bei, Uncle Jian Zhe wanted to slap Xiao Bai.
However, Liu Weiwei seemed to have found a problem.
"Jian Zhe, it seems that Xiao Bai’s appetite is not very good these days." Liu Weiwei said secretly, so that the two children next door would not hear.

"Ah? Xiao Bai? I'm here, so you can show me. Does it have cavities? Last week, I saw it live eating ice cream and eating a lot of white rabbit candy." Jian Zhe's face was aching. He was Xiao Bai’s fan. The hardships of the five-year master's and doctoral studies were all kept by watching Xiao Bai eating on live broadcast. He entered the base veterinarian and his most ardent wish was to examine Xiao Bai’s body, especially her stomach.
Xiao Bai could eat food that was several times its size. Even if Jian Zhe knew that it was a Level 7 beast, he couldn't help but want to hug the beast and rub it!
Jian Zhe squinted his eyes, put on sterilizing gloves immediately, and cautiously put his head into the next room.
Oh oh oh~~
His little Xiao Bai was lying on the medical bed and stretching. There was no trace of impurities in the pure white hair, and the whole small body seemed to have no long bones. The fluffy drooping ears were attached to the edge of its chubby little head, and the pair of agate-like eyes was watery. Jian Zhe had a strange smile all over his body as he approached.
"Xiao Bai, can I check your teeth for you? If you have cavities, you can't eat ice cream." Jian Zhe took a deep breath and touched Xiao Bai’s face. In an instant, his whole body seemed to be struck by lightning and he was shocked.
The little face was too soft! This elastic pink meat was more than a hundred times better than his pet goat!
Xiao Bai was still very spiritual, she opened her mouth cleverly and cooperatively, revealing two front teeth, and a row of... sharp teeth normally owned by high level beasts.
Since entering the veterinary hospital, it was the first time that Jian Zhe was in close contact with Xiao Bai. The krypton beast squatting on the bed next to Jian Zhe roared at him in dissatisfaction and then woke him instantly.
"How about her teeth?" Liu Weiwei frowned.
Jian Zhe: "… Awesome."
"?"
Jian Zhe laughed harder than crying, "Sister-in-law, Xiao Bai can probably bite me to death, right?"
"...Well..." Liu Weiwei looked at the innocent-looking Xiao Bai and found that it was trying to yawn innocently. The corners of her mouth twitched, "Don't worry, my Xiao Bai doesn't eat raw food."
Jian Zhe: !!! He had long known the power of the Level 7 beasts. He knew this from the school textbook and later verified it from the beast wave he saw with his own eyes. However, he had been unable to associate any of these ferocious characteristics with Xiao Bai for so many years.
When Jian Zhe turned around, Xiao Bai on the medical bed had already rolled around on the bed cutely. If it weren't for the short tail, it was estimated that she would also want to wag it.
"I know, I know." Liu Weiwei patted Xiao Bai’s head, "Your teeth are not broken, I'll give you a strawberry-flavored candy when we get home."
Jian Zhe swallowed, "Well... Then let’s check the digestive system to see how the stomach is."
"Okay, I'll hold her. Tell me what you need to do." As Liu Weiwei said that, she smashed Xiao Bai into her arms, pulled its two little claws, and let its little belly exposed in front of Jian Zhe.
Jian Zhe took a deep breath and tried his best to control his urge to ruv the rabbit fur. He gently touched Xiao Bai’s belly with his right hand. Soft... just as he imagined! As soon as he looked down, he saw Xiao Bai smashing her small and charming lip, as well as the small nose that gently sniffed at him, also a pair of beautiful doll-like eyes. If it was his pet goat, he would probably give the vet a kick on this medical bed!
Liu Weiwei hugged Xiao Bai and used her eyes to appease Xiao Hei next to her. She wanted to ask about the situation, but seeing Jian Zhe's intoxicated expression at the moment, she almost forgot her words. "Jian Zhe? Jian Zhe... Doctor Jian? Veterinarian Jian!"
Jian Zhe was finally awakened when the Xiao Hei was ready to wave his claws in dissatisfaction and send him flying. He withdrew his hand that were pressing on the Xiao Bai’s body.
"Sister-in-law, Xiao Bai will have a baby soon." Jian Zhe glanced jealously at the krypton beast behind him, raised his head, and dropped a heavy bomb in the room.
Liu Weiwei: !!!
Xiao Hei: !!!
Xiao Bai: Eat, eat, eat~
…
Liu Weiwei had never raised a pregnant rabbit, let alone one pregnant with hybrid baby. Since the pregnancy was confirmed by Jian Zhe, she was more nervous every day than when she was pregnant.
The entire base veterinary hospital was also disturbed and even Marshal Li Er of the base heard about it and came to their house to see. The descendants of a Level 7 beast and Level 10 beast had to be super powerful little guys. They might even have the respective advantages of the two parent beasts at the same time.

"If it can have the lightning speed of the Rabbit King and its amazing bouncing power, but then inherit the indestructible metal skin of the krypton beast and its powerful attack power, then this will be the strongest beast ever raised by humans." The base scientific research bureau and veterinarians come to do various inspections on Xiao Bai every day.
"It's not artificial. They love and reproduce freely, so they have nothing to do with me." Liu Weiwei refused to admit the arranged marriage, but she quickly packed the family's belongings and temporarily moved back to the base from the military academy.
"Comrade Qin Mo, what do you think the children of Xiao Bai and Xiao Hei would look like?"
"Love to eat, insidious, cunning."
"..."
"Xiao Bei, what do you think?"
"Like transformers. Rabbit during the day, dog at night~"
"..."
"Little Yue Yue?"
"Eat more than me, run faster than me~"
"Xixi... Well, forget it, come here and I'll braid your hair."
"Thank you Mama~ Can you help me tie into a cute little braid like Xiao Bai’s lop ears?"
"..."
Under the attention of the family and the people from a base, Xiao Bai finally gave birth to her and the krypton beast cub three months later.
Jian Zhe, who said he was going to deliver Xiao Bai’s baby, was said to have fainted in the delivery room that day. The reason was… Xiao Bai turned into a real Level 7 beast and sat on top of him... stunning him.
The newly born cub had already opened its eyes. It had small soft fur all over its body and some golden hairs could be faintly seen. The cub was a male, more like Xiao Bai according to genetics. It was almost a copy of Xiao Bai. The small ears were vaguely shaped like Xiao Bai’s drooping ears, and even the short tail of the little butt is inherited from her, however, it had a pair of beautiful little wings! 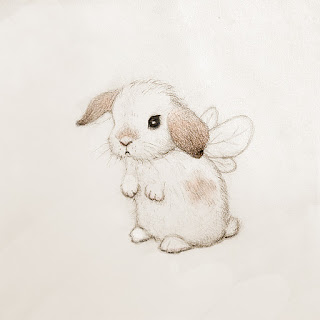 When Jian Zhe woke up and went to the nursery to take a look, he saw the sturdy back of the big rabbit covering the large floor-to-ceiling windows. It was already in the arms of the krypton beast that had also grown more than ten times larger. The little brat... was a flying rabbit with wings! He almost burst into tears on the spot.
The cub inherited Xiao Bai’s characteristics... And the cub, if looked closely, was also very cute! His big round head was like the extinct panda...
Meanwhile Qin Xixi, who was wearing a pink skirt, also had a new aesthetic pursuit the next day. "Mama, can you sew my little skirt so it has the same wings as Xiao Feifei? Make it pink!"
"…"