"Gu Shenliu..." Jiang Yu whimpered. The two hugged each other, her softness pressed against his chest, until their skin was pressed together and they felt each other's temperature.
Gu Shenliu sighed contentedly, lust hadn’t yet completely possessed him, but he felt that the friction between the skin made the two of them closer than ever. This kind of temperature from the body surface was transmitted from the surface of the skin to his heart, expanding in his atrium little by little. He liked this feeling, of course, he preferred to lie on Jiang Yu’s chest, smell the light fragrance on her body, and inhaled everything that made him crazy. 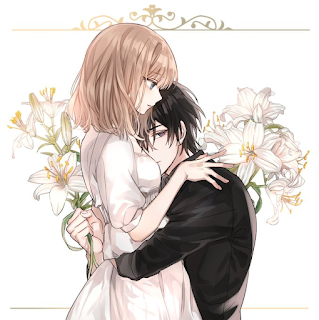 "Does it smell good?" Jiang Yu pursed her lips and asked with a smile in her eyes.
"It's fragrant." Gu Shenliu smelled it again.
Jiang Yu's thin knitted sweater was a bit sheer, which made her look sexier. To be honest, in order to make the sweater achieve the effect she wanted, she asked the factory to redesign it many times but she was still not satisfied in the end. She had no choice but to find a knitwear factory in the city that met her requirements.
However, at the moment, the sheer knitted sweater made Jiang Yu’s skin whiter than snow, her skin was bright and lustrous, and she had a pink tenderness that belonged to a girl. Gu Shenliu loved this feeling very much, the feeling when he touched her soft places with his big hand.
Jiang Yu couldn't help groaning and a sense of urgency yelled at her.
Gu Shenliu lowered his head and let Jiang Yu bloom in front of his eyes.
Jiang Yu only felt extremely uncomfortable. She felt hungry and thirsty everywhere. At this moment, she was not as calm as usual. Her cheeks were slightly red with emotion.
Of course Gu Shenliu also took pity on Jiang Yu. His lips went from top to bottom, Jiang Yu only felt more and more uncomfortable.
A groan overflowed from Gu Shenliu’s mouth, he was a man who couldn't resist the temptation of his own woman. This was the nature of animals, and the same was true for Gu Shenliu. Jiang Yu's cat-like moans made him lose his soul immediately. He suddenly felt that his usual self-control and self-restraint were fake. Those could only work on people who didn't matter. In front of his love, he often became true to himself, not once or twice, but again and again. But he didn't feel annoyed. He just felt that this novel feeling was really good.
Gu Shenliu was delighted. Jiang Yu was poison, and he wanted to taste it more and more.
Suddenly some music sounded and the two who were tangled in love were startled. Jiang Yu touched Gu Shenliu's chest and asked: "Don’t answer the phone?"
"No." Gu Shenliu frowned. He was about to lower his head to continue, but saw that the call seemed to be against him on purpose, the ephone kept making trouble. The phone rang over and over again, like a life-threatening spell.
The two had big headaches.

Jiang Yu sighed, raised her lips and smiled: "Take it!"
Gu Shenliu frowned, picked it up, and said, "What's the matter?"
Gu Linlu on the other end of the phone was stunned for a moment, and then he said in surprise: "Where have you been? It's hard for you to spend the New Year’ Eve at home, but the most important person has disappeared."
"You can eat first."
Gu Linlu was stunned for a moment. He then asked casually, "Did Jiang Yu come back?"
Gu Shenliu didn't deny it, he only said: "You eat what you eat, don't worry about me." After that, he hung up the phone.
Interrupted by the call, the two felt cold. Their passion suddenly faded.
Jiang Yu coughed and said, "Go back for your family’s New Year's Eve dinner. I plan to go to a restaurant to pack a few dishes and go back to eat myself."
Gu Shenliu frowned slightly, "Do you think I'll let you celebrate the New Year alone?"
Jiang Yu really didn't want Gu Shenliu to accompany her. Any family member who saw the son or brother’s girlfriend calling him out at this time would feel a little inappropriate. She smiled and pretended to put on clothes. "I don't want you to accompany you. You should go home for the New Year! Otherwise, I will leave a bad impression on your mother."
"You don't have to worry about that." Gu Shenliu's brows were frivolous with a smile that was not a smile: "You are very charming, and my whole family is about to become your support group. How could they have any bad opinion on you?"
Jiang Yu laughed.
Seeing Jiang Yu started to tidy her clothes, Gu Shenliu refused to let go. He pulled her clothes and said domineeringly: "Don't wear it."
Jiang Yu rolled her eyes: "If I don't wear it, I'll be cold."
"You look better without clothes."
"It's as if you've seen me naked." Jiang Yu hummed.
Gu Shenliu's eyes became colder. He took a sigh of relief. This time, he simply pressed down his entire body on top of Jiang Yu. A masculine breath that belonged to him enveloped Jiang Yu. The sense of strength made Jiang Yu had the desire to be conquered.
Gu Shenliu stared at Jiang Yu, his deep eyes tightened with a sense of danger, he said: "Provocation must bear the consequences!" After he finished speaking, he grabbed Jiang Yu's buttocks, picked her up, wrapped her legs around his waist, and hung her whole body on him.
Jiang Yu also liked to exercise, dance zumba, yoga, etc, so this pose was not difficult for her. Her legs were hooked around Gu Shenliu's waist and her extremely private parts fit him. Jiang Yu could clearly feel his excitement.
Jiang Yu raised her eyebrows, "Is it hard?"
This made Gu Shenliu's mouth slightly raised. There was a hint of a smile on his face.
Jiang Yu's temperament was very contradictory. She looked sophisticated, but she had a naivety that many people didn't have. But she couldn’t be called naïve because she was calmer than anyone else when she did things, and she even behaved bluntly sometimes.
Gu Shenliu's eyes were blurred and his voice was hoarse: " For some things, you have to explore the truth yourself." After finishing speaking, holding her little hand, he guide it to a place of his own, and emphasized: "Only this way you can know the answer."
"..."
Gu Shenliu’s mouth was attached to Jiang Yu's ear, with a smile on the corner of his mouth, and he continued on: "Junior sister, exploration and seeking knowledge are the motto of Shenda University. As Shenda University students, we must all follow it."
Jiang Yu laughed. If the teacher who taught the school motto knew that Gu Shenliu would use the school motto on this matter, they probably would vomit blood.
Gu Shenliu hugged Jiang Yu, saw her upturned ass in the mirror, and saw her two sexy legs. He no longer hesitated and took her directly to his bedroom. Who knew that he had just taken two steps when his phone rang again.

Gu Shenliu frowned and looked gloomy. With this appearance, Jiang Yu couldn't help worrying about the caller, fearing that they would be destroyed by Gu Shenliu.
Jiang Yu held back her laughter, A man whose belly was full of fire was really scary! She raised the corners of her lips with a smile on her brows and eyes. She said softly, "Let's answer it? It's probably your brother again telling you to go home for dinner!"
"No answer!"
The big thing had to be detoured over and over. Now he didn’t want to see anyone, he just wanted to do things with Jiang Yu.
"Aren't you afraid that they will kill you if you don't pick it up?" Jiang Yu raised her eyebrows.
Gu Shenliu took a deep breath and furrowed his brows, but he didn't let go of Jiang Yu, he supported her buttocks with one hand and hold the phone with the other.
Jiang Yu hooked Gu Shenliu’s neck and listened to him talk on the phone.
"Hey."
"Shenliu, is Jiang Yu back? Ask her to come to the house for dinner!" Came the voice of Mother Gu.
Jiang Yu waved her hand, motioning for Gu Shenliu to refuse for her.
Unexpectedly, Mother Gu immediately said: "Don't refuse, our family doesn't have so many rules. We are just having a light meal, so you can bring Jiang Yu over!" After that, she also specially instructed: "If Jiang Yu doesn't come, you don't have come either. Huh!"
After hanging up the phone, Gu Shenliu glanced at Jiang Yu, kissed her on the lips, and said: "You heard, Mom asked you to go to dinner."
"Not good, right? It's not good to go to someone else's house to eat during the Chinese New Year. Besides, I didn't prepare any gifts."
"Go!" Gu Shenliu insisted: "I understand my mother's character. If you don't go, she will definitely come here to invite you in person."
…
Gu Family's Villa was on the edge of the Emerald Lake in Shencheng. The villa facilities here were well developed. In addition, it was close to the Emerald Lake with good scenery and fresh air. Many wealthy families with elderly and children would choose to live here.
When Jiang Yu got out of the car, she, who had always been calm, had the illusion of seeing her husband's family. She had lived two lives but it was the first time she experienced such a thing, so she felt a little clueless.
The door opened, Jiang Yu looked up, and thought she would see the faces of the Jiang family, but who knew that a chubby little boy appeared in front of her instead.
When the little boy saw her, he suddenly became excited and shouted: "Sheng!"
This call unexpectedly pleased Jiang Yu and relieved Jiang Yu's mood a lot. She smiled and clapped to the little bun: "Xiao Q?"
When Xiao Q saw this, he opened his hands to be held by Jiang Yu.
Seeing this, Gu Linlu, who was holding the child, hummed softly, "This Xiao Q has liked beautiful women since he was a child!"