In fact, Jiang Yu knew that the blood relationship couldn’t be easily broken and the law wouldn’t support the agreement to take effect, but the reason why she let Yu Hong be was mainly to shoot a video as evidence. Jiang Yu knew that when her drama was released later, as she got more and more famous and her chances of being on TV increased, Jiang family would definitely see her on TV at that time.
Even if the Jiang family didn’t know it, people in the village would inform them when they saw her. With the family’s personality, they would definitely go to Shencheng to ask Jiang Yu for money. At that time, her situation would be very passive, but with today’s recorded video, all would be different. In the video, Zhang Meifeng arrogantly said that she would marry her daughter to a foolish violent man, arrogantly said that she would cut off the relationship for 100,000 yuan and sell her daughter!
All of this was enough to keep Jiang Yu safe on the cusp of the storm in the future! Of course, she still hoped that it wouldn't be a big deal.
Thinking of this, Jiang Yu glanced at Yu Hong again. She was suspicious. Yu Hong suddenly took out 100,000 yuan to redeem her. Could it be that she knew that she was famous?
No, it shouldn't be so, Jiang Yu denied it in her heart. Yu Hong and her two sons were not professional actors. If they really knew, they wouldn’t act so naturally. Besides, Yu Hong had been secretly helping her all the time, not just suddenly.
…
More than half an hour later, the tricycle stopped at the outskirts of the county town. Yu Hong took the suitcase out of the car and said: "Little Taro Ball, although the house at home is a little broken, you can live there first."
Jiang Yu walked into Yu Hong's house for the first time. What surprised her was that Yu Hong's family opened a chicken farm. This chicken farm was built beside the river embankment. There were dozens of chicken coops in it.
Seeing Jiang Yu’s surprise, Yu Hong smiled and said: "Almost all the chickens in my house are free-range. Usually, they roam on the river bank and come home at night."
The house where Yu Hong lived was also next to the chicken farm. It was one of the few tiled houses in the area. Jiang Yu walked in and saw that the house had been cleaned by Yu Hong. Simple wallpaper was pasted on the brick walls and some flooring installed on the floor. Simple furniture was neatly arranged and the quilts on the bed were folded into squares neatly.
To be honest, Yu Hong was also good-looking, with a plump face that was a bit fleshy and a nice voice, it was easy for people to develop a good impression on her.
After speaking, Yu Hong sat down, stared at Jiang Yu who didn't say a word, and sighed: "When I think about it now, I was really too impulsive. I brought you back without asking your opinion."

Jiang Yu smiled: "Actually, I don't want to stay there either."
Hearing this, Yu Hong suddenly breathed a sigh of relief, she said straight: "That's good! That's good! I was afraid I have done do something bad with my good intentions!"
Jiang Yu glanced at Yu Hong and asked again, "You have been funding my school all these years?"
After hearing this, Yu Hong smiled, lowered her head, and said: "This is all voluntary. After all, when you were young, I also raised you. Although I only raised you for a year, I really regarded you as my own daughter. But I didn't expect that even though you were young at that time, your memory was too good. Well, all in all, it would be better to follow me than to follow Zhang Meifeng."
Yu Hong words were sincere, Jiang Yu could hear it. Jiang Yu raised the corners of her lips and smiled lightly: "Have you spent a lot of money over the years?"
"No! It's not much, don't remember this little thing! We adults can save enough for our children after a long time. You are also sensible and can save money, so it doesn't cost much at all. Besides, my two sons are both not good at studying, so when I knew that you did good in school, I’m reluctant to let you drop out."
Yu Hong was afraid that Jiang Yu would be burdened, so she pointed to the outside again and said with a smile: "Don't look at me running a chicken farm like this. In fact, my life is no worse than others. The reason why I haven't bought a better house or moved out is because my chicken farm is on the list for government demolition soon. With just one broken tile-roofed house and this piece of land, at least 4 commercial houses can be exchanged. When I thought about it, since I will get so many houses, why should I buy a house myself?"
Jiang Yu smiled, "Even if I don't have to pay anything else, but I will definitely pay you back the 100,000 yuan today!"
Hearing the words, Yu Hong quickly said, "I gave the 100,000 yuan to your mother voluntarily! I really take you as my own daughter! Maybe you don't know it, but I have been secretly going to the school gate to see you all these years. Although I don't expect you can treat me as a mother, but even as a passerby, I hope you can study hard and not be delayed by your family’s affairs."
Jiang Yu secretly observed Yu Hong's expression and felt very emotional. People said that there were good parents in the world, but Jiang Yu's parents were simply unworthy of being human and they were so cruel to their daughter! Patriarch family was always like this!
But Yu Hong, on the contrary to Zhang Meifeng, was so selfless to Jiang Yu even though they were unrelated. Not only did she not value sons over daughters, but she was probably even prefer daughters over sons. She was also a good parent!
Jiang Yu smiled and didn't say anything, but the more Yu Hong didn't want it, the more determined she was to give the money back to Yu Hong.
At this time, Yu Hong's two sons came in.
Yu Hong was good-looking. Although the two sons were not as outstanding as Gu Shenliu, they were also above average in appearance within the crowd. More importantly, Yu Hong's two sons were more than 1.8 meters tall. Also, their temperament seemed good. (TN: 1.8 meters approx 6 feet.)
Yu Hong smiled and said, "Little Taro Ball, this is your eldest brother Zhou Xiao, and this is your second brother Zhou Yue!"
"Brother Zhou Xiao, Brother Zhou Yue." Jiang Yu called out.

After hearing this call, the two big boys actually blushed. Zhou Xiao coughed and then said: "Sister Taro Ball, you may not remember me, but when you came to our house, you were only this tall..." Zhou Xiao gestured to his knee, "Until now I still this it was impossible, how a small child like you could remember the way home? Over the years, my mother and I have often visited you at the gate of your school and even secretly followed you once. But, you, you mistakenly regarded us as a bad person!"
These were all memories belonging to the original owner, Jiang Yu smiled and said nothing.
They chatted for a while.
Yu Hong was afraid that Jiang Yu would be hungry, so she cooked the meal ahead of time. She even killed two chickens, saying that it was to nourish Jiang Yu's body.
Yu Hong's dishes were delicious that even a sparrow like Jiang Yu couldn't help but eat a full bowl of rice.
After eating, Zhou Yue looked at the chickens running around, couldn't help sighing, and said: "Mom, there are still a lot of eggs left at home again this year. It looks like they can't be sold!"
Yu Hong heard the words, went silent for a while, and sighed: "I don't know why this year we haven’t been able to sell eggs. I thought it would be better during the New Year period, but who knows that people are not like before. They only buys what they want to eat so things are not as good as before. After the New Year, even fewer people will buy eggs, so our family has many surpluses of eggs and chickens. We can’t throw the eggs away, so I think we are just unlucky!”
Yu Hong never imagined that eggs would be difficult to sell one day.
Hearing this, Jiang Yu frowned. She had always thought that things like eggs were in short supply, so how could they not be sold? "These free-range eggs are very nutritious, how can they not be sold?"
After saying this, the three of them sighed.
Zhou Yue said: "You might not know Taro Ball. We also thought so before, thinking that free range eggs would be more expensive than foreign eggs, so we raised a lot of them. But once we raised them, our sales channels couldn't keep up. Even if we go to the vegetable market for wholesale, we couldn’t sell them at all, so we couldn’t finish these eggs. Chickens lay eggs every day, but egg suppliers in the market is not only us, so sometime our eggs will not be sold for a long time." 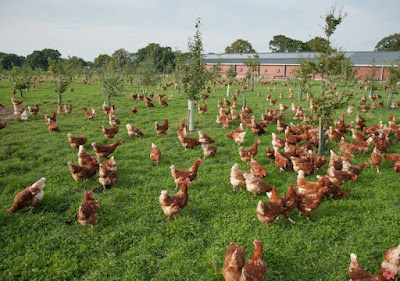 Jiang Yu heard the words and thought for a moment. She came to the low slope and watched the chickens running around. She sighed very much in her heart. If this were in Shencheng, such nutritious and free range eggs would be a hot commodity that people would search everywhere. There might even be a short supply, never left over! "Have you never thought about selling the eggs on Taobao?"
After hearing this, Zhou Xiao said: "Of course we thought about it. But eggs are easy to break, so we think it's too troublesome. It would be difficult to operate, so we finally forget it."
Jiang Yu shook her head. She vaguely remembered that there was an old farmer who sold eggs on Weibo before and the business had always been very popular. Since other people could sell it, it proved that even breakable eggs could still be delivered safely. Thinking of this, Jiang Yu opened Taobao, searched for free range eggs, and saw many sellers jumped out.
Jiang Yu turned a few pages and found that these eggs were selling well. She raised her head and looked at the chickens running around all over the slope. She suddenly had an idea in her heart.