After getting in the car, Jiang Yu sent a text message to tell Gu Shenliu about the situation.
Gu Shenliu's phone call came immediately, and he said solemnly: "Why didn't you tell me?"
"Huh?"
Gu Shenliu came to the window. The two had been together for so many days and they had been facing each other day and night. Although they were not yet close to that level, they were used to being together. They suddenly separated at this moment and it seemed that the whole city was instantly empty.
"I can take you back."
"No need to!" Jiang Yu was afraid that Gu Sheliu would try to do this so she left in such a hurry. If her family knew that she became an internet celebrity and made money, that her boyfriend was Gu Shenliu, she was afraid that the original owner’s family members would devour her!
"I'll be back in a few days. You wait for me!" After speaking, Jiang Yu hung up the phone first.
…
The train was both fast and slow. The passengers on the train came and went, the cries of children lingered in Jiang Yu’s ears, and the loud conversations made her heart a little irritable.
However, years of practice made Jiang Yu’s face still calm, and when the train honked its horn, she got off the train with her suitcase in her hand. No one came to pick her up, so she followed the original owner’s memory and confirmed her home address from the original owner’s Taobao's saved delivery address. She took a taxi and went directly to her home.
The original owner’s family lives in a small town on the 18th line in the neighboring province of Shencheng. This town was not the kind of poor town that needs to walk a dozen miles of mountain roads. On the contrary, most of the people in this town were doing small business. These years, Taobao entered the countryside and many rural people started to do Taobao for selling flowers, trees, rice, radishes, etc., resulting in Taobao pick up vehicles to be easily found everywhere in the village. 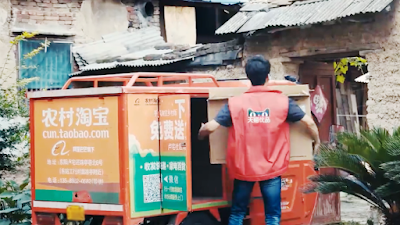 The taxi drove forward and stopped in front of a building. The building was two-storey. Although it was not as imposing as the three-storey building on the side, it didn’t look particularly shabby.
Jiang Yu got out of the car with her suitcase in hand.
The door was open and a woman was sitting at the door breaking corn. When she saw Jiang Yu, the woman wiped her hands on her apron, then stood up and sneered: "Yo! Do you still know how to come back? I thought you think as you are able to go to Shencheng you wouldn’t know how to go back to a small place like ours!"
The woman spoke strangely and those who didn't know would think she was Jiang Yu's stepmother, but in fact, according to the original owner’s memory, this was her blood mother. But the original owner didn’t know why, she had never liked Jiang Yu.
As soon as Jiang Yu entered the house, she didn't want to act different than the original owner to avoid suspicion, so she bit her lip and greeted, "Mom."
Zhang Meifeng looked at Jiang Yu coldly. She glanced at the old down jacket on Jiang Yu's body with disgust, "Take the suitcase up! Your brother-in-law will be back later! Go and mop the floor of the house, wash the dirty clothes, and then wipe all the doors and windows. Clean everything to greet them!"
Hearing this, Jiang Yu frowned, greet? Was this so-called brother-in-law the emperor? Still need to be welcome back?
Jiang Yu was about to refuse, but at this very moment, a domestic off-road vehicle was parked at the door, and then a man and a woman came out. The woman looked like she was around twenty-seven years old. She had a small curl on her hair, painted on makeup, and wearing a new style. With her down jacket and high heels, although overall the woman was not particularly fashionable, but in such a small place, this kind of dress undoubtedly belonged to the fashionable crowd.
And the man, who looked to be in his mid-thirties, was of medium height, with a plain face, and seemed to be an honest man.
"Oh! Jiang Jie is back! Chenglei is here too?"

Only then did Jiang Yu realize that the woman was Jiang Yu's eldest sister Jiang Jie, and the man was her brother-in-law Zhao Chenglei.
Jiang Yu's family, like most rural people, prefers sons to daughters. Zhang Meifeng gave birth to two daughters in a row. She really wanted to have a third child to fight for a boy, but she didn't expect that she would have a daughter again in her life before finally got a boy the fourth time.
Therefore, Jiang Yu has two older sisters, the eldest sister Jiang Jie, the second sister Jiang Lan, and the younger brother Jiang Mingxuan.
Jiang Jie glanced at Jiang Yu and said indifferently, "Jiang Yu is back too?"
"Sister." Jiang Yu called out.
"She just came back! I haven't seen her for a year. You see, she still looks like she's dead, dressed so badly as if she ran out of some refugee kiln."
After Zhang Meifeng finished speaking, she said to Jiang Yu with a cold face: "You should learn from your sister! Look at Jiang Jie, she can dress up and be fashionable! Look at you again... I don't know the use of you going to college?! Also fashion design major, isn't it just learning to be a tailor? The fat aunt at the entrance of the village is a tailor, you might as well learn from her directly! It also saves you spending the money to go to waste. I said back then that you shouldn't be allowed to go to university, if it weren't for..."
Jiang Jie pulled Zhang Meifeng. When Zhang Meifeng saw this, she closed her mouth and then said coldly: "Today your sister and brother-in-law are eating at home, you cook for them!"
After hearing this, Jiang Yu laughed on the spot. She pushed her old-fashioned black-rimmed glasses and asked inexplicably: "Mom, why did you ask me to cook? I just got back!"
"Just came back? Do you have anything else to do? You can't earn a penny, keeping you to eat is a waste of food. With your character, I don't think you can find a good job when you graduate!"
After Zhang Meifeng finished speaking, she looked at Jiang Jie and her tone was flattering: "You learn from your sister! They have bought a car and Jiang Jie is now working on Taobao in town, earning five to six thousand yuan a month. Your brother-in-law Chenglei is a civil servant and has to go to work in the afternoon! Everyone is doing business while you are the only one in the family who has nothing to do, who will cook if not you?"
After hearing this, Jiang Yu laughed angrily. She wanted to show Zhang Meifeng the balance of tens of millions in her Taobao really badly.
Jiang Yu glanced at Jiang Jie and Zhao Chenglei, but saw that they had no intention of speaking for her at all. Looking at their expressions, it seemed that they thought Zhang Meifeng's words were quite reasonable.
Jiang Jie said impatiently when Jiang Yu didn't move: "Are you going to cook or not? Jiang Yu, don't make trouble unreasonably and quarrel as soon as you come back! You are annoying!"
Zhao Chenglei pulled Jiang Jie and lared at Jiang Yu unhappily.
Jiang Yu stared at everyone coldly. This time, when she returned to the original owner’s home, facing these family members, her principle was that as long as the other party did not bully her too much, she would be able to bear it. Because once there was a conflict or if the other party finds that something was wrong, or went to Shen University to inquire, they would know that she had a small wealth now. If this fact was known, she was afraid that there would be more troubles.