At six o'clock in the evening, almost the entire Planet Zeke’ residents that was attacked by the beast wave received a new Interstellar Alliance public notice. At eight o'clock in the evening, the feast will start on time.
Each resident received a map, marking a total of hundreds of luminous points, all of which they could reach within half an hour and get food. All dangers in the marked areas had been eliminated, so everyone could travel with confidence.
Jian Zhe, who was still at the temporary base and continued to do voluntary aftermath work, also quickly received a map. But because he was with the troops, the nearby activities were basically the large area behind the base where civilians previously couldn’t enter. He had just fed Dingding dinner and was about to go to a veterinarian named Raipur, the new owner of the golden monkey, when the map came.
"Brother Jian, let's go together." Raipur was a thin young man who had just graduated from veterinary medicine. He couldn't even do basic sutures at first, but now he will perform some simple operations on beast. Now he was full of energy, and even his figure was a circle fatter than before he joined the volunteer group.
Because both of them were new shit shoveling officers, Jian Zhe had a good relationship with Raipur, "Okay, wait a minute, I'll ask the little guy Xiao Bei if he wants to join us."
When Raipur heard this, he immediately gave a thumbs up, "He knows how to eat the best, so we need to take him with us! I think there are at least three or four hundred dishes on this map, so we certainly can't finish them all in one night. We have to pick only the best ones to eat."
At the same time, this scene also happened in many places.
Little Meat Bun Ciao Bei, who was rushing to work in the temporary tent, received dozens of invitations instantly, including one from Miss Veterinarian, Uncle Lu, Sister Nurse, and even many soldiers who had just returned from the front line. In this military region, he was just like a duck to water.
When it came to eating, the first person that came to mind was Liu Weiwei, and the second was Little Meat Bun Xiao Bei.
Little Qin Bei touched Xiao Bai's head in distress, "Baibai, our charm is too great, I can only cruelly reject them." Tonight, he was going to follow Comrade Qin Mo to work hard!
But although he refused, Little Qin Be still drew a private map and replied to each invitation one by one. This private map was actually nothing, but it was emphatically marked with five-pointed stars on several points, indicating the degree of ‘must eat’, ranging from one star to five stars.
Soon, everyone received the reply, and after opening the map, they all laughed tacitly.
"Five stars mean, no matter how far it is, you must go."
"Four stars, as long as time permits, it's worth taking a detour."
"Three stars, follow your route, you can go only if you have enough time."
"Two stars, if you're on the way, then go."
"One star, if you happen to pass by and don't need to queue, go!"

Since Little Qin Bei started drawing five-pointed stars two years ago, the most reliable strategy for the annual celebration snack street of the First Army Regiment was his hand-painted private map.
"Okay, I've got the strategy, let's get started, brothers."
"Old rule, make the shortest route for four stars and five stars points! After those are finished, we could go to three stars, two star and one stars."
"Okay!"
This map was quickly circulated among the various teams of the First Army Regiment. Everyone's chat group flickered non-stop. At six o'clock, everyone would split up to collect food. After getting enough gourmet dishes, they would return to the top ten center bonfire at eight o'clock and start eating around the fire.
From this time, there were only two hours of colletion time.
…
After Jian Zhe also got the map, he shared it with the entire veterinary team and set off together with Xiao Mei. Their big shed, very coincidentally, was a five-star dining spot.
It didn't take five minutes for them to find the robot squatting beside the krypton beast.
"Is this the supply point for roast suckling pigs?" Jian Zhe looked at the map and asked first.
The robot immediately took out an oven from its space, "Roast pig quiz, if you answer correctly, you will get a 500g roast pig. If you answer incorrectly, you will get my hug."
A group of veterinarians: "..."
"I didn't expect that this time, Chef Liu also set up a test!"
"Well, the sudden event probably leads to insufficient ingredients, right? If everyone is frantically collecting food, it will be wasted and it will also affect the people behind."
Jian Zhe touched his nose and sent a message to Xiao Bei. When he got a helpless expression emoticon in response, he could only bite the bullet and say, "Okay, then you ask."
The robot took out a marinated pig and threw it all over the metal wire.
"Multiple choice question 1: The reason for the Krypton Beast's injury this time is... A, it is stupid; B, it saves three female soldiers; C, recurring old injuries; D, all of the above."
Jian Zhe took a step back and said, "Can I ask other people?"
Robots were now very intelligent.
"Can."
Jian Zhe quickly glanced at the cute female veterinarian, "Xiao Mei, do you know the answer?" When he saw the options in the quiz, he really wanted to choose A. But to say that the krypton beast was stupid... that's too bold!

Xiao Mei also frowned at the moment. She looked at Dr. Li next to her uncertainly, "It was a new wound, but there were also some old wounds that relapsed. It has also saved the soldiers, but we cannot just choose 2 out of 3."
Dr. Li pinched his chin, "I'll think about it, if you can't answer this kind of question after being in our veterinary department for a long time, you'll be embarrassed."
The veterinarians looked at each other. Their brows were furrowed, clearly determined to win the question.
Raipur was holding his new favorite golden monkey, "It should be D, right? Last time I heard that it was attacked by a few Level 7 Beasts that pretended to surrender. Is this stupid?"
"Huh!" Krypton Beast opened its eyes suddenly, snapped out its bandaged claws, and slapped the ground directly. The slap left the ground with a shallow pit.
Raipur: "My God, it’s must be C, it's the old wounds! Which beasts can hurt our majestic and powerful Xiao Hei?"
Jian Zhe:  …
After struggling for two minutes, the answer discussed by the entire veterinary department was the last one.
Jian Zhe took a deep breath, "D, I choose D!"
Xiao Hei snorted in his throat, obviously dissatisfied with Jian Zhe’s answer.
Jian Zhe was about to change his mind when the robot roasting the pig suddenly played some music.
"The answer is correct. Please wait in the pickup area. The next person, please be ready to answer your question."
Dr. Li took a step forward, "Is the next question still about the krypton beast? Come on Xiao Mei, you have been watching over it."
Xiao Mei nodded and walked to the front.
"Multiple choice 2: What is the favorite food of krypton beasts...? A..."
"Snail Noodles!"
"Correct! Next."
The people in the entire veterinary hospital were relieved. The problems were all related to their work, so it was not difficult. Most of the people finally got the roast pig. The pig’s skin was crispy and the meat was fragrant. When dipped in barbecue sauce, they couldn't stop eating it. 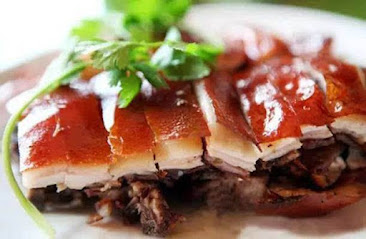 They could even wait until eight o'clock to gather around the bonfire to have dinner together.
Jian Zhe's mouth was full of oil, and even the glamorous Xiao Mei beside him was not much better. When they wanted a second copy, the robot refused, so they could only rush to the next point.
But when they were about to leave the shed, they encountered a group of military men who came over shoulder to shoulder. Many of them were from the Western Army Group, and the leader was Nelson, who joined the Eastern Army Group a long time ago.
Seeing Dr. Li, Nelson reached out and said hello.
But soon this group of men in the army returned with only the hug of the robot.
"Nelso, you nasty fellow! You lied to us! Why this robot didn’t give us food? It asked about the treatment of Krypton Beast, how would I know?!"
"Okay, Nelson, the snack street you just said is all a lie to us. You abandoned us because of the benefits in Eastern Army Group! You can answer this question and let us see!"
"The map is useless! I was wrong to trust you!"
Nelson was surrounded and he was about to be beaten.
But soon Raipur slapped his head and rushed up, "Brother soldiers, we will answer these questions, let's cooperate."
Jian Zhe was sweating, but he quickly reacted. Since there were veterinary problems in this military area, other places might also have special soldiers’ problems. If the group of veterinarians encountered questions about soldiers and military tactics, and most of them would not be able to answer. If they cooperated, they would be able to eat more food.
Nelson had a bruised nose and swollen eyes. After being rescued, he was very fond of Raipur. Not only did he give him a small piece of the roast pig he got, but he also immediately hugged him, "Raipur, if you join the army, I will definitely cover you."
Raipur hugged his golden monkey and nodded again and again with a smile.
Jian Zhe was also quickly taken away by a tan strong man that asked him to help answer the question about suture and disinfection.
Within ten minutes, the people from the veterinary department were in a team that blended with the military men. They cooperated very happily.
"The next five-star location, salt and pepper shrimp, let's go!"
…
Salt and pepper shrimp. Xiao Bei’s top ten menus. 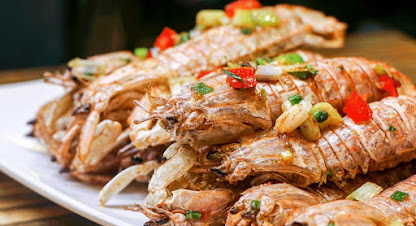 Since Xiao Bei was a child, Liu Weiwei always served shrimp and porridge in order to supplement him with protein. Later, when he could eat by himself, she started cooking all kinds of shrimp dishes. This salt and pepper shrimp was a dish that she cooked the most, and the whole family liked to eat it.
The cooking process of salt and pepper shrimp was not complicated. So it was successfully completed in the hands of the robot.
"Please listen to the question."
"How many military region were dispatched in this beast wave? Please answer."
In a group of veterinarians, many ordinary guys who volunteered to participate were dumbfounded, but they were very happy to be able to ask the soldiers and help each other. When they successfully gnawed on the salt and pepper shrimp, they felt that the shrimp taste was even more touching.
"Hey, we should gather for dinner at eight o'clock, but I forgot again." Even Dr. Li couldn't help slapping himself on the forehead, "Let's go, let's go to the next place."