"This Boss, she is that thousand-handed tornado female chef!"
They didn’t know who called it out, but everyone was instantly shocked. Anyone who loved the Internet and had a wide circle of friends knew the videos of Dragon Beard Noodles. This was the most popular video a while ago and military academy students had strict rules for watching the beast wave news. Everyone had seen the video of this female chef!
With this said, everyone was completely awake.
Hou Honglin walked ten meters and almost threw the drinks out of his hand excitedly.
Guo Tao and Zhang Yichi looked at each other and were surprised, "She is that chef?"
"Of course!" Hou Honglin wished he could knock on them. "Didn't all the vests already fall off? She is the head chef of the military base. The head chef who cooks for the soldiers." After he finished speaking, he was also stunned for a moment. "No wonder she came to our school. Ah, our spring is here!"
The three of them immediately thought of the future. They could eat the most delicious military rations, eat the most interesting snacks, and watch the coolest Dragon Beard Noodles performance nearby. It would be so beautiful.
The big cup that Hou Honglin was holding in his hand suddenly felt heavy. This stuff was made by the great chef! He hurriedly lowered his head, solemnly put the thick straw in his mouth, sip for a while, and saw the milk tea with black and round pearls, small and cute red beans, and yellow pudding was all sucked up with his big lung capacity. 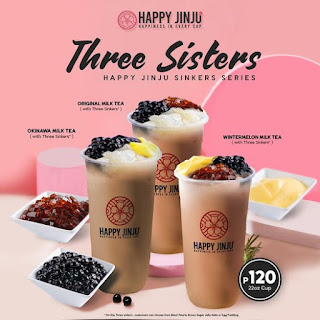 A mouth full of... sweet treats.
The milk flavor was mixed with a light tea fragrance, and it had a fullness that fills the whole mouth. The pearl was like an air cushion, full of elasticity; the red bean was glutinous and sweet, like a shy little girl; and the pudding was also wonderful thing. It is simply three brothers with full personality!
Hou Honglin sipped to the lower half of the cup in one breath and his cheeks were full. Aw, ah, ah, it's hard to say, but this was really an unprecedented experience, and it made him so excited that feel he could run back and forth for an 800-meter sprint.
Needless to say, Guo Tao and Zhang Yichi as well, even with a cup with one liter of liquid capacity, the drinks were also dropping at a frantic speed. After they breathed a sigh of relief, they glanced at each other. It turned out to be very tacit understanding, and they opened the roasted milk tea with grass jelly in their hands.
"Let's just take a look, and then we'll take it back to the fourth brother." Hou Honglin's voice was quite loud when he said that. But after opening the lid of the box and taking a look, he silently swallowed.
"Why don't we each take a sip? It's like a payment for running errand for the fourth brother."
Grass jelly was actually somewhat similar to pudding. On the not-so-hot day, the three strong-bodied young men felt the icy cold drink blowing towards them, which made them suddenly refreshed. In addition to the pure black ice-cold grass jelly, there were also lovely flat pinto beans, yellow and purple taro balls. Inside the cup, it was actually colorful, and it looked very enticing.
"Yes, there is a fee for running errands." The three happily agreed.
Since they could only have one sip, they should eat all the different colors and ingredients in it. The smooth and tender taste of the grass jelly had a slightly bitter and cool medicinal taste, but it was not annoying, but had a refreshing feeling instead.
The young men were all at the age of greed for coldness, after taking a sip, they felt comfortable in their bodies, and they were happy everywhere. And the taro balls and pinto beans were also eaten one by one. They were full of curiosity about things they have never eaten.
Obviously, Liu Weiwei did not let them down. Saying that the cup would be filling was true, not only delicious, but also full of things.
When the three returned to their senses, the cup was empty. The promised errand fee was overpaid in an instant.
"Hehe, too, too good." Zhang Yichi touched his nose, "This is simply magical that I just want to drink it up."

There was a mentality called conquest. The chewier something was, the more it needed to be chewed up. Just like squeezing bubble wrap, you couldn’t stop until all bubbles were popped.
"Okay, just tell the fourth brother that there are too many queues. It's not appropriate to buy it on his behalf."
"Well, limited supply, it's not good to buy too many."
"Oh, sh*t, I'm just stupid. I knew I should buy two copies."
The three of them sighed and returned to the bedroom with a guilty conscience.
And the original post of the school cafeteria was frantically pushed to the top one in the forum just a few hours after the trial operation was opened. Comments and messages with photos of the drinks filled the forum. Not only the students, but even the teachers of the academy also broke their restraint.
Of course, they still had to have face. Most of the teachers in the military academy were former soldiers. Many people would not admit openly that they liked sweets, and it was even less likely to admit that they liked beautiful looking things. However, their bodies were honest.
At one o'clock in the afternoon, when the students' lunch break passed, the teachers were dispatched silently. Even the teachers who had classes in the afternoon asked the teachers who did not have classes to bring them a copy. As for what to order, they looked at the pictures in the endless posts, and they were able to order them according to their tastes.
Qin Mo, who was originally not very good at communication, and was someone who was on his first day of work today, also instantly became a popular person. For the first time since joining the army, he knew what it means to eat soft rice.
"Colonel Qin, you are going to teach mecha to junior 3rd class in the afternoon. This is the list of students that I have prepared for you with their mecha scores from last year. Hmm... Can I ask, your wife's mango milk and strawberry milk, which one is better? Well, bananas look good too... This is such a difficult choice, what should we do?"
Qin Mo's mouth twitched. He didn't want to answer this question at all, but the female professor's eyes were so earnest that it reminded him of the saying his child's mother always talked about, that the customer is king. This was his child's mother's king, so he had to be patient, "It's okay, you can change your order every day and taste everything one by one."
As a result, Qin Mo took only two steps when someone stopped him again.
"Colonel Qin, I found the mecha you controlled when you graduated back then. It's still usable. I'll leave it to you."
"Thanks."
"By the way, your wife's egg tarts are available in limited quantities? Can you ask for unlimited quantities? You see, our students have to train early in the morning, so they can't eat them at all."
"... I'll go back and mention it."

Qin Mo found that his unprecedented popularity was all brought by his wife. This experience was quite new. But he thought about it when he walked out of the office and it seemed that it was not the first time. Since the two got married, the family had become livelier than before, and there was almost an endless stream of guests at home.
When Qin Mo thought about this, his face darkened.
…
On the other side, Liu Weiwei was very happy. She once had a small dream, which was to open a milk tea shop and became a small boss, and now it was a reality. She also found it very interesting to be in contact with the students.
On the first day, the revenue was very slim, and on the second day, she took advantage of the great opening to launch a new dish – egg cake. These egg cakes were somewhat similar to pancakes. 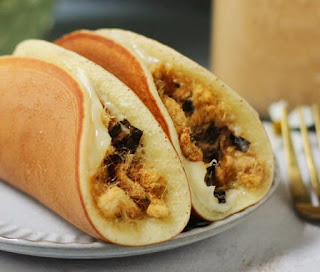 Egg Cakes
Liu Weiwei took an oversized cooking spoon, smeared some oil on the bottom of the spoon, scooped a spoonful of the batter mixed with egg and flour into it, and spread the batter by turning her wrist. When bottom of the cake became browned, she added the fillings selected by the customers. Sweet version was generally the girls' favorite, which was the creamy sesame sauce, while the salty ones included minced meat floss, shredded potatoes, and even sour cowpeas, etc. Various combinations, some got spicy fillings, and even endless derivatives of durian flavors...
After adding the filling, the two sides of the cakes got folded in half, and it became a bulging semi-circle. It was just the right size to hold in one hand. The inner core was warm and soft, and the outside was like a crispy cone.
The aroma of the egg cake that just came out wafted from a long distance. This made people follow the smell to find it and their saliva was drooling all the way. Students continued to roll up their sleeves and buy! Eating and drinking, gathering points, both were good.
And the teachers also couldn't stand the temptation. They didn't even want face anymore. They came to line up early, hoping to eat a delicious egg cake for breakfast.
Yesterday, Song Hua, who was squatting in the dormitory to play games, regretted so much that his bowels had turned green, so he took out the other three people in the dormitory early this morning. In any case, he would drink the grenade menu mentioned in the post today, he would drink the cherry blossom high-value grenade!
When the party arrived, the queue was even more exaggerated than the day before. Everyone knew that the egg cakes were limited, so they came very early.
"Look," Hou Honglin smirked, "We didn't lie to you, right? How can we bring you a cup with so many people in the queue? I'm afraid we will be beaten to death by the guys queuing behind."
The other two roommates followed with a guilty smile.
When they finally arrived at the front, they were pleasantly surprised to find that not only did they have egg tarts left, but there were also new egg cakes today. They were even more excited to try it.
"Boss, four egg tarts, four egg cakes, and three cups of ultimate weapons milk tea..." Hou Honglin thought for a long time and blurted out skillfully. 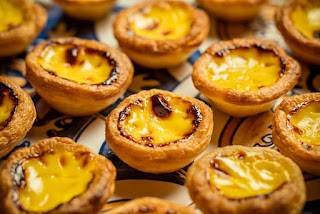 Egg Tart
As a result, a little head that appeared on the cashier counter grinned at him, "Uncle, it's you again. I recommended your delicious food yesterday, right? Do you also want another roasted milk tea with grass jelly for takeaway to give to your roommate back at the dormitory today?"
Song Hua: !!!
Hou Honglin and the two: !!!
"No, don't, don't slap me in the face! Ah! Buy a drink first, buy your cherry blossom grenade first... Ow!"