Jiang Yu arrived at Gu Shenliu's parking spot and saw a blue sports car parked not far from the school gate from a distance. It was just after school hours, so the expensive brand-name sport car parked in front of the school aroused the spectator of many students.
Jiang Yu got into the car, but she saw Gu Shenliu sitting in the driver's seat wearing a hemp-gray low-neck sweater. The loose sweater gave a different taste on his good figure. Today he also didn't shave his chin, so there was a short shadow on his jaw, giving him the charm of a mature man. No wonder people say he was a walking hormone!
"Have you waited for a long time?"
"It's okay." Gu Shenliu said: "When I was in class at Shen University, the Fashion Department had no class on Friday afternoon, so I came to have a look. It turned out to still be the case."
"As expected of Senior Brother!"
Gu Shenliu stretched out his hand and touched Jiang Yu’s head, smiling with the corner of his mouth, "Are you hungry?"
"Huh?" Jiang Yu felt weird that the 35-year-old her was touched on the head.
"I'll take you to eat delicious food!" After Gu Shenliu finished speaking, he drove to a street outside Chengxi Wetland Park. This street was famous for many specialty restaurants and coffee shops, and it was a popular place for literary and artistic youths in this city.
Gu Shenliu took Jiang Yu to a coffee shop called ‘Flower and Alice’. The coffee shop was full of flowers. Fresh flowers, dried flowers, fake flowers, and succulents made the coffee shop a sea of flowers. With the various flowers displayed, coupled with the petty bourgeoisie decoration and floor-to-ceiling windows on three sides, this coffee shop quickly became an Internet celebrity coffee shop.
Jiang Yu had read about the shop on Weibo, but because she had no car, it was the first time for her to come to this far away place. "Is it delicious here?"
"It's a shop opened by a friend." After Gu Shenliu finished speaking, he led Jiang Yu to sit down by the window. He then said, "The truffle burgers here are delicious, and the coffee is authentic." 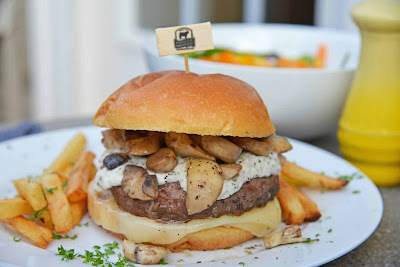 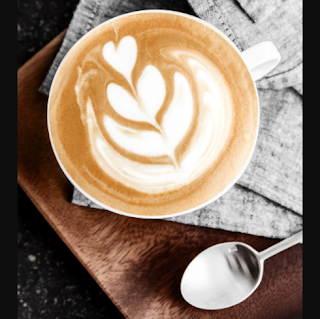 Jiang Yu ordered a cup of coffee and tried a black truffle burger on Gu Shenliu's suggestion.
"How about it?"
Jiang Yu frowned slightly. "Well... the taste is a bit strange, not the same as the burger I imagined, but it's surprisingly harmonious, and it’s still delicious."
Gu Shenliu smiled with the corner of his mouth. "I like to eat here very much. I come here every time I come back from filming." The waiter seemed to be familiar with him and directly served his favorite coffee and burgers.
The two ate burgers and drank coffee, just like many ordinary young couples in love. Although there were not many people in the coffee shop, the only few people had already looked at them, obviously suspicious of Gu Shenliu's appearance.
Jiang Yu was a little worried, so she asked in a low voice, "Will you be photographed?"
"Why? You don't want others to know that you are with me?"
"Not that." Jiang Yu subconsciously denied: "I'm just worried that the scandal will affect you. Besides, I don't want to rely on you to be famous. I don't want people to say, ‘Oh, she is just Gu Shenliu’s girlfriend.’ I don't want to be labeled like this."
Gu Shenliu had already seen that Jiang Yu didn't want to be known by public other than by her own merit. He said: "You don't have to worry about me. I have been in the entertainment industry for so long and I always don't care about those names. I just film, work, and act in peace. In my eyes, being an actor is just a job. It’s the same as doing anything else."
Jiang Yu was a little surprised that Gu Shenliu would say this. In her opinion, even though it was her job to be a designer, it was also her dream.
Gu Shenliu said again: "But I respect your decision."
Not wanting to talk about such a topic, Jiang Yu changed the subject and said: "Speaking of which, I really want to ask you about acting."
At this time, the girls at the next table were discussing something with each other, and turned to stare at Gu Shenliu's face.
"It seems that if you don't leave, you will be besieged by fans today."
Gu Shenliu didn't mean to go.
Jiang Yu said: "You go back to the car first? I'll go to the toilet and go out after."
"Okay."
This shop deserved to be named on the theme of flowers. There were flowers everywhere. On the way to the bathroom, Jiang Yu saw a lot of precious flowers.
"Oh! Feng, what are you talking about! Is Yiyi that kind of person in your eyes?"
This voice...
Jiang Yu was taken aback, turned her head to look and saw Yao Yiyi leaning on a middle-aged man with a big belly in the side seat. She was saying softly "When Yiyi become famous, Yiyi will definitely not forget your support."

The man said trivially: "Yiyi, it’s good if you know it. In the past few years, I have had a many celebrities. That Xiaoxiao, I’m the her initial support when she was just a country girl back then and she came to my company. Under the packaging, she finally became a household goddess. I am so good for you. I just need to praise a bit and you will be popular, but you know, there is no free lunch in this world..." After speaking, the man touched Yao Yiyi’s ass intentionally, and said suggestively:
"Yiyi, this Feng likes college students like you, fashionable, avant-garde, and beautiful! You girls have ideas, so your future is limitless! If you become popular, it is possible to earn hundreds of thousands a day, and in a year tens of millions income will be a trivial matter, but it depends on whether you can afford it!"
After hearing this, Yao Yiyi only felt that the old man was very disgusting. However, she didn't know what she thought of, she gritted her teeth and fell into Feng's arms.
"President Feng, I am not an ignorant person, as long as you can make me popular, I will do the rest!"
"Nice!" Mr. Feng smiled and touched Yao Yiyi’s shoulder, "You will go to my company tonight! We will start to hype and package you from today!"
After hearing this, Jiang Yu frowned tightly. Internet celebrity? Hype packaging? What was Yao Yiyi thinking about? This big belly President Feng was not a good person at first sight!
Once a woman wanted to get something for nothing and exchanged some benefits with her body, she was not far from depravity. Taking a step back, even if they wanted to degenerate, wanted to climb up, or wanted to change into someone who was worthy, this Mr. Feng was not a good person at all. The boss of a regular company, how could he be so vulgar and bad? Mr. Feng's company was most likely not a legit company at all, it could even be a very low-grade company that also did vulgar contents.
Thinking of this, Jiang Yu frowned and left
"Yiyi, let’s take my car and go to the company together!" Mr. Feng enthusiastically pulled Yao Yiyi into the car, his eyes flashing wretchedly.
"President Feng, you get in the car first!" As Yao Yiyi said this, her eyes floated to the blue sports car not far away. If she was right, then the person in the sports car was... Jiang Yu?
Upon seeing this, Yao Yiyi suddenly became excited. She didn't believe that this car belonged to Jiang Yu’s boyfriend. How could there be so many Cinderellas these days? It seemed that she guessed right, Jiang Yu was indeed taken care of by others. Not only that, but from the car, it could be seen that the man was also very rich!
Yao Yiyi always thought that Jiang Yu had changed a lot in one summer. Not only did she change her appearance, she also started to run her own business. If it weren't for someone to operate behind her back, Jiang Yu wouldn’t become famous so quickly with just her ability. In a short period of time, could her Weibo gained 9 million followers? Dream!
Mr. Feng also said just now that Internet celebrities like Jiang Yu were all supported by people like them! Thinking of this, Yao Yiyi sneered. Jiang Yu, I'm still better than you! I will ruin you!
Thinking about it, Yao Yiyi took out her phone and pointed it at the blue sports car.
…

When the car arrived at Gu Shenliu’s Community, the two got off the car together.
Gu Shenliu opened the door and asked, "You just said that you want to ask me about acting?"
"Yes." Jiang Yu seemed a little embarrassed. She chuckled for a while: "Gao Jing asked someone to train me urgently and it helped me a lot. I can understand most of the scenes, but there is one kiss scene..."
Jiang Yu thoughtfully said: "How a kiss scene is going to be filmed usually? Is it true that good effect can only be achieved by real kiss?"
Gu Shenliu stagnated and suddenly frowned, "You have kiss scene in the drama?"
"Well, there is one in-play scene, as well as a few kiss scenes with the lead actor, Zhuang Xu, for a total of four scenes." Jiang Yu said nonchalantly. "So, Senior Brother, Junior Sister sincerely ask you how to make a good kiss scene?"
Gu Shenliu looked down at Jiang Yu, suddenly raised her chin, and smiling inexplicably: "Want to know how?"
Jiang Yu nodded.
"I’ll teach you!"
In the next second, Gu Shenliu's lips were attached to Jiang Yu’s. He first traced the shape of her lips with his lips, opened her teeth, and a warm breath sprayed on her face.
"Well……"
Every time Gu Shenliu kisses, he was very passionate with extremely obvious desire. Jiang Yu was not really a 20-year-old girl, so she was not scared, but felt calm. People only needed to be loyal to their own heart at any time. For her now, she also had a very strong desire in her heart. So she quickly hooked Gu Shenliu's neck and kissed him back passionately. With her tongue entwined, her body pressed, and her affection deepened, Gu Shenliu dragged her butt, letting her legs clamp his waist.
The two kissed all the way from the living room to the bedroom. Gu Shenliu put Jiang Yu on the quilt and put his arms on her side. This action made Jiang Yu see the tight muscles of his arms, and a smell that belongs to a man instantly pounced on her.