Jado had Jiang Yu’s shares, but she didn't intend to let others know because after many Internet celebrities become famous, they would break out the news of brand cooperation, causing netizens to resent the products.  From the perspective of fashion bloggers, it was more convincing, easy to operate, and not easy to arouse the disgust of fans if the stake share fact was hidden.
For this reason, Jiang Yu specially asked Gao Jing to find a navy organization under Gu Shenliu's studio.
——Dada, tell me what brand this bag is?
——This bag is beautiful! I have been planted again, will it be particularly expensive? If it's too expensive, I'll eat dirt again!
There were tens of thousands of people in the comments asking about the brand of the bag, but Jiang Yu didn't just come forward to say it. People were like this, the more difficult it was to get things, the more they wanted it. Everyone went to find out, but they didn't find any clues. Their hearts were getting more and more itchy, and the more itchy they were, the more they needed someone to stop the itching.
But Jiang Yu's Weibo was calm, but it seemed like she couldn't see the comments of netizens at all.
——Is it a bag designed by yourself? Will it be a new product? I really want it!
The next day, Jiang Yu released another matching picture. In this matching picture, Jiang Yu was still as usual, wearing seemingly simple but well-designed clothes, showing long legs, looking neat, carrying a bag similar to CELINE Maillon Triomphe. This bag was very small. Usually, such a bag should not be suitable for Jiang Yu's height, but with her styling, this bag became very suitable. Just simply slanting it on the body made people feel that there was an indescribable temperament. 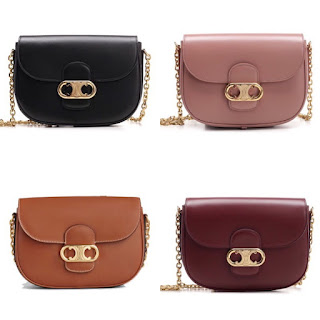 Under the guidance of the navy, all the fans below the comment looked away from Jiang Yu's clothes, and instead paid attention to her bag. Because they found that although the bag was not a big brand, it made them mistakenly think it was a big brand. That means, this bag had a design sense and aura that was definitely not inferior to name brand ones! Furthermore, judging from the pictures, the quality of the bag seemed to be pretty good. Jiang Yu carried the bag to class, to eat in the cafeteria, and to go shopping in the city. They were all very beautiful. Her temperament didn’t lose to those who carried Hermes on their side.
Of course, people ignore the fact that this was because of Jiang Yu’s original good temperament. They always felt that they were just like Jiang Yu. If they carried the same bag, they would look very good-looking and looked like they have a good temperament.
Because most of the fans were working class, or students, everyone said in their hearts: "It would be better if this bag was cheaper and not as expensive as a name brand. If I can get it for less than 3,000, I will definitely buy it!"
Jiang Peifen was a celebrity in the fashion section of Tianya Forum. She often forwarded outfits pictures of major Internet celebrities and bloggers on the Internet, especially the street photos of foreign beauty bloggers. Since Jiang Yu became popular, Jiang Peifen rarely looked at foreign bloggers anymore. It was because she found that Jiang Yu's outfits were not inferior to those of bloggers at all. On the contrary, Jiang Yu's clothes were very special and have a sense of design, and they were unique, as if never seen before.
At first Jiang Peifen didn't understand why, until it was revealed that Jiang Yu was a student of Shen University’s Fashion Design Department. Only then Jiang Peifen then realized that Jiang Yu was a professional fashion designer herself! No wonder!
After Jiang Yu opened a store, Jiang Peifen bought a dress and a pair of jeans from the store with the mentality of trying. She had no hope for the quality, but unexpectedly, the quality of the clothes was particularly good. Even after they were thrown into the washing machine, it didn’t deform and was very durable. What's even better was that these clothes have a sense of design. After wearing them, her colleagues always asked her where she bought them.
Jiang Peifen kindly told the website to her colleagues: "It's this online celebrity Taobao store, you can go and see for yourself."
Colleagues opened the website to take a look, but asked inexplicably: "Peifen, are you sure it's this store? All the URLs you gave me can't be opened."
"I can't open it either!"
"All items already sold out?"
Until then, Jiang Peifen didn't know that Jiang Yu's store limit their stocks and that there were more monks than porridge!
Jiang Peifen suddenly felt a sense of pride in her heart. She snatched the clothes in Jiang Yu's store, which proved that her vision was very good.

Jia Xing was startled and asked the store manager: "What's the matter? Is it a student parade?" In 2015, there was a student demonstration in Italy against education reform. At that time, the door of his store was the same, with people everywhere.
The store manager was also in a hurry and said, "Is it? I haven't heard any news. But if it's a parade, there's no need to focus on the door of our store!"
"Go and ask what's going on?"
Hearing the words, the store manager ran away to ask what was going on. After a while, the store manager walked back dumbfounded, unable to believe the truth: "Boss! It's not good!"
"What's wrong? Really a parade?" Jia Xing felt nervous. Every time there was a parade, the business of the store would be affected.
"No!" the store manager shouted excitedly: "They are here to buy things! Purchasing! Purchasing agents from China!"
"What?"
At this time, the door opened and all the Chinese purchasing agents rushed into Jado store like a flood. They acted as if Jado's things didn't cost money, as if the things in front of them were not bags but toys, as if they would lose money if they couldn't buy them! Everyone bought frantically, they looked for the style and said directly to the salesperson:
"Is this bag still available? I want 30!"
"I want 50!"
"Do you have this one? No? Why don't you have anything in your house?!"
In a short time, several bags in the store were all sold. Seeing the empty store, Jia Xing couldn't help laughing and crying! Chinese people's purchasing power was too strong! Could this be called shopping? It's almost a robbery!
Jia Xing noticed that most of the styles that everyone purchased on behalf of the people were from Jiang Yu, so he hurriedly said to the unsatisfied purchasing agents: "Don't worry, everyone! There is still stock in the warehouse!"
"Warehouse?" The store manager was about to cry: "Boss, the goods in the warehouse have long been sold out!"
"Sold out? I asked the factory to urgently add 2,000 bags..."
"It's all here! It's been taken out a long time ago! As for the other inventory, it's been divided up to several other stores! In other words, our warehouse is empty!"
Just then, an Italian native walked into Jado. She looked around at the empty counter, dumbfounded, and asked the manager in disbelief: "What's wrong? Your house is going to close down? Why is there nothing! I'm just going to buy a few for my relatives abroad."
After the store manager's explanation, the Italian woman still didn't believe it and said after a while: "Wow Chinese!"
Because there were no bags to sell, Jia Xing was so anxious that he went to the factory every day to urge the production! He was in a hurry over in Italy and it was the same in China. Because Jiang Yu seemed to have just seen everyone's comments at this time, she smiled and forwarded the previous Weibo, leaving a message:
[It seems that many fans like this bag. In fact, the bag I am carrying is not a luxury item. It is just an Italian brand. It was introduced to me by my Italian friend! The brand name is Jado. If you like it, you can ask someone in Italy to buy it on your behalf!"
——Huh, Jado? I already knew. Buy? Sorry, can't buy it!
——Taro balls, this bag has been on fire for a long time. Your reaction is too slow, right? I have also looked for a purchasing agent and they said that it was sold out in Italy.
——The purchasing agent said that it would take 1 month to deliver. They were all out of stock!
After a while, Su Ye suddenly posted a Weibo. In the picture, she and Jiang Yu were shopping together. "It's really fun to go shopping with my girlfriends! Eat, drink and have fun! You can't miss something like this! By the way, this bag recommended by my good sister is also very easy to carry!"
Netizens were stunned for a moment, the bag Su Ye was carrying was so stylish! Also Jado's? But wasn't this brand known as the favorite of Italian aunts? How could there be such a young and fashionable style?
At the same time, Taobao's major purchasing agents had uploaded pictures of the bag Su Ye was carrying. They also photographed many new Jado bags on Taobao.
All fans were surprised to find out. Jado's new bag looked so good!
That’s right! The bags designed by Jiang Yu were fully listed!