The Beast Pet Restaurant soon caught fire on the planet and local TV stations sent several waves of reporters to interview them.
The beast wave gradually faded, and the safety index kept improving.
There were also more and more guests willing to go out to the bomb shelter to dine.
Liu Weiwei took a look at the krypton beast wrapped like a big zongzi as usual in the morning, and touched its head. 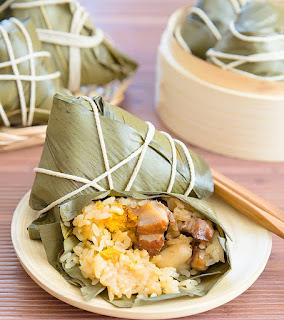 Zongzi
"It's recovering very well, much faster than we expected. Several big broken ribs have been healed and the wound on the wings has finally stopped bleeding. With this recovery ability, it will be able to crawl normally in ten days at most and walk in a month." As soon as Dr. Li saw Liu Weiwei coming, he immediately updated the situation.
Xiao Hei snorted.
Dr. Li smiled bitterly, "It seems that it still dislikes my estimated time and for it being too long."
Liu Weiwei now understood the temper of the beast best and clicked its nose, "Listen to what Dr. Li said. You scared us this time, take a good rest, and don't be stubborn."
Dr. Li touched his nose and smiled, "Clerk Liu, can we suspend the special meals for Xiao Hei these few days?"
Just as Liu Weiwei was about to leave, she stopped awkwardly. Xiao Hei loved snail noodles. Every time he ate it, she found from the system that his injuries slowly recovered at a speed of 1% or 2% each. In the week since the injury, she had given Xiao Hei a little portion of snail noodles almost every day and literally healed 30% of his injuries.
However, it did interfere with other people's work and also the rest of other injured beasts.
Liu Weiwei blushed a little. If it were the former boss of her company, any employee who dared to bring snail noodles to the office every day would definitely be scolded with blood. Dr. Li had endured for so many days without having a seizure, so he definitely had a good temper.
"Then... Should I bring the air isolation cover newly developed by the Scientific Research Bureau?" Liu Weiwei sighed.
Dr. Li also sighed, "Yesterday, Xiao Mei tried it, and as soon as she took off the cover, she found that Xiao Hei’s mouth smell... er... still had the odor."
Liu Weiwei thought the great wisdom of the people of Liuzhou was not so easy to destroy. "I'll get some air purifier and some perfume later?" She rubbed her hands in a guilty conscience.
Dr. Li had a great headache, "Okay, let me transfer the other beasts first and separate Xiao Hei into a special room for himself." He also knew that after a beast pet ate its desired feed or snacks, it would be very satisfied psychologically and mentally, which was especially beneficial to boost morale and improve the speed of physical recovery. Several beast pets that were dying before were rescued in this way. Snail noodles still had to be eaten by Xiao Hei, but the taste of this high-level beast was really too heavy!
"Thank you!" Liu Weiwei was immediately embarrassed and asked the veterinarian to make a big concession, "The snail noodles do have a strong taste although it is delicious..." But her eyes suddenly lit up, "Dr. Li, why don't I give you snail noodles for lunch today? It's delicious and you'll know after eating it. It doesn't stink at all. The more you eat, the more fragrant it gets, the more addictive you are."
"...This," Dr. Li's hands trembled, "Thank you so much." Cooking Soldier Liu was recognized as the most respected chef at the base. The annual snack street event was the most anticipated festival by every soldier and even the resident veterinarians were no exception. When it came to food, she had the greatest authority. If she cooked something, even dirt tasted delicious. Dr. Li comforted himself. Although he was a little worried, he politely and gratefully responded.
Liu Weiwei finished the sales with satisfaction and believed that when the veterinarians tasted snail noodles, at least half of them would be convinced by the charm of it.
Xiao Bai continued to keep her daily activities of lying in the pile of snacks and performing the image of a beloved little daughter of the landowner's family for the Xiao Hei who still couldn't move at the moment as he was sedated.

Liu Weiwei went to the temporary pet restaurant in the protection area alone with two battle robots. Said to be temporary because it was not a full restaurant. She just used a small half of the warehouse as a place to cook. As soon as she entered the kitchen, she was stopped by three gray-haired senior apprentices.
"Teacher, come and taste my soup today, is there any improvement needed?"
"Old Gao, don't rush my turn. I just said that I will be the first to ask Master for advice. Master, come and take a bite of my scallion pancake. I think the chewiness can be improved and I also can put a little bit more pepper, what do you think?"
"You guys are so annoying. Teacher just came back and didn't even have time to drink water. Teacher, please sit down and drink tea. This is top oolong tea I just brewed and you can also try the Longjing tea."
Liu Weiwei was directly surrounded and she didn't even see the cauldron in the kitchen. The three apprentices made her dizzy, "Don't worry, I'm going to stay all day."
"Yes, Yes. No hurry, no hurry."
"Yes, yes, I'm getting confused."
"Drink tea first, tea first!"
Liu Weiwei sighed, "Elder Gao, Elder Dou, Elder Cai, you are all seniors. Didn't we agree long ago that you shouldn’t use honorifics with me? Call me Xiao Liu or you will go back to your home planet tomorrow."
The three old people had no choice but to nod, "Did I forget? Okay, I will remember next time."
Liu Weiwei quickly tasted their dishes one by one and said some of her own experiences and suggestions.
The dining hall outside was also full soon and the waiter came in a hurry, saying that another reporter was coming to interview the owner.
…
Reporter Jiang Zhen came with a photographer. She was responsible for going back to write reports, but since she sat down, her whole person's state was very erratic. In front of her was a squatting tiger with its mouth open. While yawning, it showed its fangs. Next to it was an alpaca with strong teeth that was chewing bones and behind it was a boxer kangaroo who kept punching in the air.
It didn’t look good!
Why did people say that there was a cute bear cub and a beautiful but arrogant eagle, but all of them turn into fierce beasts when they come to her?
"Little Jiang, don't shake your legs! My camera is shaking." The photographer brother was obviously a little dissatisfied. He was actually also a little nervous, but more curious and excited. Usually, where could a normal person go to take photos such a high-level, handsome, and tough beasts? This opportunity was too rare, but the only fly in the ointment was that the female reporter kept shaking.
"I, I, I didn't shake my legs..." Jiang Zhen was about to cry. She found that she couldn't speak well.
"Then go through the menu. I'm ready to shoot. I heard that the menu is very special, you have to move slowly, I want to take a close-up." The photographer felt that his inspiration was bursting out because of the group of beasts.
Jiang Zhen squeezed her hands together, trying to calm herself down. Yes, there was nothing to be afraid of. Yesterday, the official statement was made. The beasts here were all retired old combat beast pets, and there was no harm. She could even stroke their fur freely.
Jiang Zhen turned the first page of the menu and was quickly attracted by the lovely hand-painted style. The tiger beast, which was obviously very ferocious, looks like a kitten on it. The kangaroo, which obviously had a huge body, looked soft and cute when lying down, making people want to laugh. There were also alpacas that looked even more stupid. They were chewing on the grass.
Behind each caricature were their nicknames, their age, and how many training sessions and assignments they took.
"Ah, this Xiao Jin has actually captured 26 child trafficking criminals!" Jiang Zhen covered her mouth, "And this alpaca cutie had participated in three beast waves, big and small, helped the police catch 139 criminals. The very fierce tiger beast..."
The resumes of almost every beast were glittering with gold, enough for Jiang Zhen to spend an afternoon reading and then went back to write a long story. "So they are really heroes~"

Jiang Zhen instantly felt that the thin first sheet of paper on the menu was heavy. She was a little reluctant to turn the page, until the photographer gave her a cough as a reminder. When she turned to the second page, she saw all kinds of dazzling and mouth-watering dishes.
"I have long heard that the price of this store is extremely cheap and it gave special subsidies for the residents of this war-torn area. These low-priced delicacies not only feed the residents’ stomachs, but also warm and heal their wounded hearts." Jiang Zhen saw the price listed and couldn’t help feeling touched.
There were labels on the back of each dish name, which one could be fed to which beasts, which dish was which beast favorite, and which this couldn’t be fed to which beast. The menu was very interesting. It even allowed guests to know which kind of beast their taste was most similar to, which was quite a special experience.
"I saw a recommendation from the owner today, why don't we just order that?" Jiang Zhen now faces the camera, her timidity was gone. Since knowing the heroic deeds of the beasts, she was no longer afraid.
"Let’s order the secret braised mutton that cannot be fed to the alpacas, roasted oyster the food that eagle will condescends to eat, snake soup which sounds scary but turns out to be the favorite of the bear cub and also a favorite of the tiger. Hmm... Let's also order another stir-fried vegetable, which can be fed to the alpacas after being washed in water."
Jiang Zhen quickly called the waiter to order.
"I heard that the owner also provided jobs for people who lost their homes due to the beast wave. In this shop today, I didn't see any robots doing help." As Jiang Zhen explained, she secretly put her eyes on the head of the alpaca next to her. The stupid and cute appearance made her melt.
The photographer stopped Jiang Zhen urge to touch the alpaca’s fur hair in time, "It's written on the first page that it's best to make physical contact after feeding, otherwise it may cause the pet's disgust."
"Okay." Jiang Zhen stuck out her tongue, "Then take a photo for me~"
After a shutter sound, Jiang Zhen, at the photographer's suggestion, focused on making up a few close-ups of her interaction with the beast pets. When they were done, the hot dishes were also served by the waiter.
The first course, the braised mutton. The whole pot was still steaming hot, and the large chunks of mutton visible to the naked eye were stacked in the pot, which directly forced the alpaca who had been watching with his head sideways away.
Jiang Zhen picked up the chopsticks with some guilt.