Jian Zhe finally bought a bunch of snacks for the beasts in the restaurant. He was addicted to spending money like hell, and it didn't take long for him to consume the small amount of his deposits. He's not a rich man, but he was a man who almost died in a beast wave. Compared with death, being alive was already lucky, so what was money? Although the beasts had their own weird temperaments, they were all heroes who saved his life.
As long as they were happy eating here and interacting with the diners, Jian Zhe felt that his savings, which were not enough to buy snacks for a year, could be consumed. He patted the mountain goat's head and fed it a small cage of loofah, which it seemed to like too.
——F*ck, I'm really going to this restaurant, don't stop me any of you!
——Brother, please show us the king oyster mushroom!
——I want to see what saliva chicken is. I'll give you a reward so buy it and eat it~
——I want to watch the Tsundere Wolf again, please buy another snack to feed it.
——I like that kangaroo, it looks so cute and silly.
——Why didn't you see that little bear cub? My heart has become a puddle of water, the baby bear came to this sister's arms, sister will buy meat for you to eat~ PS: This old lady has already boarded my private spaceship to go to the restaurant!
——The local tyrant above, will you pass by Planet Dada, can you pick me up?
Jian Zhe probably would never have thought that one day he would be rewarded by live broadcast viewers. He was not a handsome guy, he was not a sassy Internet celebrity, and he was also stupid and couldn't speak well, so this was unexpected. In just a few minutes after his wallet was flattened, it bulged out again, and it was bigger than before.
Seeing Little Qin Bei's baby fat, Jian Zhe raised his sleeves aggressively.
"Waiter, I want to order! In this menu, from top to bottom, from left to right, I will order it all." Jian Zhe had never been so arrogant. When he said this, his blood boiled. In the stunned expression of the waiter, he quickly added shyly. "Don't worry, you guys can make them slowly, I also have to digest anyway."
Xiao Bei stared at Jian Zhe blankly, "Uncle, do you know how a fatty came into being?"
"...don't tell me, thank you."
Jian Zhe's big orders attracted the bear cub that had always been afraid of life and hid in the corner. It still couldn’t eat meat and was still drinking milk. There was an almond milk drink on the menu, which directly hooked it up. Not sure if it was because Mother Bear left too early, or if it was taught by the big kangaroo in the shop.
With a heartache, Jian Zhe hugged the little cub in his arms, took a small milk bottle from the space, and fed it little by little just like feeding a puppy. "This is child labor. The cube is underage." He said bitterly. He really wanted to call the restaurant manager over to scold and then take the bear cub back to his home.
The little cub's entire bear face was covered with thick white fur, which felt like a soft high-quality blanket. Jian Zhe didn't dare to exert himself.
Little Qin Bei's live broadcast once again faced a crisis of paralysis. But before the server crashed, Xiao Bei quickly turned off the live broadcast.
When Jian Zhe was holding the sturdy bear cub and couldn't extricate himself from the fur of the beast, Xiao Bei was already sitting upright, and he even looked like a good baby.

"Mom, I came to dinner with Uncle Jian. Uncle Jian has helped many beasts survive the danger of their lives, but he himself has never eaten Xiao Long Bao and saliva chicken."
"Xiao Bei wanted to use his pocket money to invite him to dinner, but uncle strongly refused, saying that he would use his own money. Later he said that he wanted to broadcast live so that everyone could see the cute appearance of the beasts  and he could charge a little reward money to eat stuff by the way~"
"He cried when he ate Xiao Long Bao. He happily ordered the entire menu now. Xiao Bei said it will be too much, but nothing could stop him."
Jian Zhe: ...!
Liu Weiwei, who was about to come over to catch her son, immediately looked at Jian Zhe dumbfounded. "You will get indigestion if you eat so much, Veterinary Jian. If you like, you can come here often in the future. My shop will be open for a while."
Jian Zhe's head was about to burst into smoke. He almost slammed into the floor in embarrassment. But soon he raised his head again in astonishment. Her looked at the chef's uniform the other party was wearing and opened his mouth, "You are the chef here?"
Liu Weiwei glanced at Little Meat Bun that had his feet up, "Didn't you tell Uncle Jian?" In the past few days, she watched her son stick to the veterinarian every day.
Little Qin Bei swayed his two short legs, "I thought uncle knew it long ago."
Jian Zhe: ... he didn't know at all.
"Uncle, don't you eat a lot of snacks made by my mother already?" Little Qin Bei obviously liked to dismantle people directly.
Jian Zhe collapsed and immediately raised his head, "Ah! Liu's snacks? You are the one behind it?" (TN: Jian Zhe use the formal ‘you’ here.)
Liu Weiwei nodded and smiled, "Don't use honorifics. Just call me Sister Wei."

Jian Zhe felt he was in a dream, but after thinking about it, he felt that he was extremely stupid. Why else would Xiao Bai has so much to eat in the live broadcast and they were all snacks that have not been released on the market. At first he thought it was military rations, so there was no sale outside. But he should have thought of the weirdness of the little chubby guy. He was just like Doraemon. He pulled out snacks as if he had the whole world’s snack on his space.
He was so stupid! If Little Qin Bei was an ordinary child, he would have no way to get snacks and hook up with that unreliable Captain Lu. His mom was the chef, his mom was the snack maker, that's the real answer. Jian Zhe woke up like a dream.
"I've always heard Xiao Bei mention you, saying that you like those snacks. I also told Xiao Bei a few days ago that he would bring you more snacks. Did you receive it?" Liu Weiwei smiled and touched the bear cub's face.
"So Sister Wei was the one that sent it! Received." Jian Zhe almost stood up and bent over to thank Liu Weiwei, but she stopped him.
"Then eat well. Let the waiter pick three or four dishes for you to keep and try for the rest when you come back next time." Liu Weiwei also returned to the kitchen in Jian Zhe shyness, not forgetting to kiss son's face.
The corners of Jian Zhe's mouth couldn't close. He never imagined that such a gentle and young female scientist would turn out to be a female chef and the noblest idol in his heart. The snack pack he received a few days ago contained at least fifty or sixty packages.
Salt-baked chicken legs, grilled squid, meat floss, dried small fish, duck collarbone, duck racks... Each of the individual small packages was different. If he ate one a day, he could eat it for two months. He heard from Xiao Bei before that the snack package would be released at the end of this year for everyone to enjoy during the Chinese New Year.
Jian Zhe couldn't admire the other party's good intentions more, "Xiao Bei, your mother is really great."
Little Qin Bei was still immersed in the shyness of being a big man but still molested by his mother. Hearing this, he immediately forgot his sadness and nodded frantically, "Of course, my mother is the best. Uncle, let me tell you a little secret, even my fierce father is afraid of her."
When Jian Zhe heard something related to other people marriage, he quickly cut off Xiao Bei's words, "Xiao Bei, you probably don't need a recommendation from the waiter. You said just now that you are not full, so just pick what you like."
Xiao Bei was instantly distracted. He immediately ordered two dishes – saliva chicken and egg flavored king oyster mushrooms. 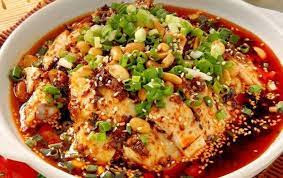 When the saliva chicken was brought up, Jian Zhe almost burst into tears again. This time it was because of spiciness. There was a strong spicy smell in the air. A person like him who usually could eat chopped pepper chicken feet the whole week was actually choked to tears.
Looking at the blood-red chicken pieces soaked in chili oil, Jian Zhe's heartbeat quickened rapidly.
"I ordered this for uncle. Just now uncle was very curious~"
"Xiao Bei will tell you, saliva chicken is not made with the chef's saliva, nor is it made with chicken saliva~ The little bun glanced at Jian Zhe's incessant breathing expression, squinted his eyes and laughed, "It's uncle's saliva."
"What?"
"Well, my mother said, the reason for the name is because there are a lot of peppercorns in the dish. When people see the white chicken in red chili oil, tsk tsk, everyone will drool. And if they smell the spicy smell, they will be greedy. Their heart will be itchy, their mouth will be numb and their tongue will be paralyzed. And finally, their saliva will not stop at all, just like you are now, uncle~"
Jian Zhe's face twitched, but he took a chopstick of chicken and put it in his mouth. Soon after, his eyes widened. The chicken pieces were so smooth. It doesn't look like the junk he ate on Skynet when he was a child.
The chicken skin was creamy and slightly refreshing, and the chicken meat was fragrant and tender. It felt slightly sweet at the first bite, but the aftertaste was vigorous and spicy.
Saliva chicken was a cold dish in Sichuan cuisine. It was famous for three thousand miles in Bashu, and tasted over the twelve prefectures in the south of the Yangtze River. A small bowl of the dish used a lot of seasonings, including chili oil, white sugar, vinegar, soy sauce, pepper oil, and rice wine. It also had crispy peanuts, fragrant sesame seeds, and minced green onion as garnish. It was difficult for ordinary people to make at home, so basically the one served in restaurants was the most authentic.
Jian Zhe ate three chopsticks in a row and took most of the small bowl before he stopped a little embarrassedly and wiped his glossy mouth. "Xiao Bei, you eat too. You eat the rest."
The little bun grinned and waved his hand generously, "Uncle, it's okay, you can eat it if you want. You are the most elegant person Xiao Bei has ever seen~"
Jian Zhe got a mouthful of chicken stuck in his throat and couldn't swallow it at all.
This was still elegant...?!