This was Jiang Yu's first time having 10 millions followers in both her life, and she was very happy.
Because of the many popular events recently, Jiang Yu’s followers were very active. Both ordinary posts and posts recommending products would have tens of thousands of reposts and comments. The current Weibo was actually already passed its peak period. Many people had abandoned Weibo and switched to WeChat, so this kind of achievement was already remarkable!
"Jiang Yu, you are amazing! In less than two months, your followers have exceeded 10 million! I am really proud of you!" said Bei Xiaoxiao.
Jiang Yu curled the corners of her lips and smiled, "Yes, I am proud of myself too!"
"Yeah! You're really welcome!" Bei Xiaoxiao hugged Jiang Yu, not forgetting to squeeze her breasts: "I told you to be humble, hahaha..." She chased Jiang Yu to squeeze Jiang Yu's chest, Jiang Yu dodged from left to right, and the two of them ran around the room.
Jiang Yu had rarely been so intimate with people in her previous life. She used to see girls going to the bathroom, sleeping, and breast attacks together, but she had never experienced it. Now she has experienced it personally. It was a sweet experience. She couldn't help laughing and said hurriedly: "Okay! Stop making trouble! I have business to do."
Bei Xiaoxiao was out of breath after chasing, but fortunately she spared Jiang Yu.
Jiang Yu sat in front of her laptop panting, she smiled and thought:
"Ten million fans, what gift do you think I should to give my followers?"
"Does this still need to be said?" Bei Xiaoxiao smiled, "Some idols will post selfies to thank fans for their support, and some will post some private photos like my idol Gu Shenliu, but you..."
Bei Xiaoxiao thought about it seriously again: "You often post matching photos and pictures of clothes. If you post a selfie, fans will not find it special. It would be better to post a lottery on Weibo. The prize is the clothes in your store! Yes, this is a good idea! Double Eleven is just around the corner, so you can also take the opportunity to promote your clothes."
Jiang Yu thought for a while, and then reposted Su Ye's long and heart-warming Weibo without a hassle, and said in a sincere tone: [My dear, I hope that Su Ye Makeup can bring you strength, and I hope that it can encourage girls to be as strong as you. I believe you can transform into a butterfly and get a new life!]
Originally, after Su Ye posted a long Weibo, everyone flocked to Jiang Yu Weibo just to read Jiang Yu's reply. Now, when Jiang Yu posted this comment, everyone forwarded it one after another.
——There is a kind of friendship called Jiang Yu and Su Ye!
——You two should just get together! I have no opinion! In this way, everyone will not say that Gu Shenliu is interesting to you.
——I admire you so much. You are only 20 years old. It is amazing to be able to live your life like this!
——The 20-year-old Jiang Yu designed Su Mang’s red carpet, her  Taobao store get 2 crowns just 2 months after it went online, and her Weibo has 10 million followers in 2 months. Su Ye is her good sister, and Gu Shenliu is a senior brother, she is still a top student of Shen University. She is only 20 years old in age, while my 20 years old is really only 20 years old!
Seeing these comments, Jiang Yu smiled slightly. Netizens had big brains. Seeing these comments, she couldn't help but sigh. She really couldn’t keep up with the times!
And soon, Su Ye also reposted her Weibo, saying: "Muah."
Su Ye’s long Weibo was madly forwarded by major media and became the focus of popular discussion. At the same time, Su Ye Makeup became popular all over the country. Major beauty programs, beauty forums, and apps were all teaching this viral makeup. All posts related to Su Ye Makeup had a lot of traffic.
…

Zhong Xiaotong was a beauty blogger. She often shared her beauty videos online and had a lot of fans on the live broadcast platform. As a beauty blogger, she had to make up every day, even sometimes several times a day. Before, she analyzed the out of bath makeup painting method, which was very popular among netizens. When she heard that the hottest makeup now was not out of bath makeup, but a Su Ye Makeup, she quickly searched for tutorials on the Internet. After that, she basically understood the application method.
Zhong Xiaotong prepared her makeup tools and planned to do a live broadcast to everyone immediately to catch the popularity of Su Ye Makeup.
But…
The blush in Su Ye Makeup invented by Jiang Yu did not write a brand, what kind of blush would it be? Zhong Xiaotong tried several blushes, but the colors that came out were different from those of Su Ye Makeup. Thinking of this, Zhong Xiaotong opened her Weibo and wrote a private message to Jiang Yu: "Hello, Jiang Yu Dada, what brand of blush did you use for Su Ye makeup on <Base Camp>? Are they the ones you recommended on Weibo?"
When Jiang Yu saw this private message, she was thinking about how to plan the lottery for 10 million followers. She read the private message seriously, and then typed words on Weibo:
[Hello, I am using Anna Sui's spring 2017 limited edition blush. Some of the blushes I recommended on Weibo before can also be used, but to match Su Ye's clothes that day, I specially I chose this adjustable blush. This blush is good, and Anna Sui’s products are always beautiful, I recommend you try it!] 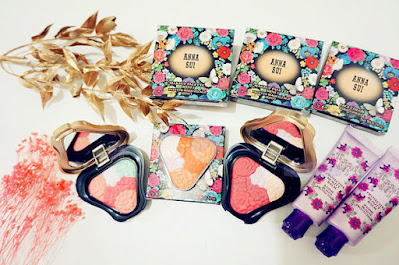 Jiang Yu posted this with a screenshot of the private message.
Seeing that she was replied, Zhong Xiaotong, who also had many followers, couldn't help but get excited. She reposted Jiang Yu's Weibo: "Thank you Jiang Yu for your answer."
Of course, with the blessing of Jiang Yu, this Anna Sui blush, which was not very popular originally, soon became a popular product and went out of stock.
The Su Ye makeup invented by Jiang Yu had caused an amazing slaughter effect, a unique one in history. Even the previous out of bath makeup was not as good as this. Although out of bath makeup was also very popular, there was no Su Ye blessing after all, so the enthusiasm was limited. But this time it was different with the involvement of Su Ye's studio behind the scene.
Gao Jing looked through his mobile phone news on the crew, and saw that the hot searches for several days were Jiang Yu’s Su Ye Makeup, he couldn’t help but tsk: "Shenliu, the school girl is amazing! How do you think her brain grows? She actually invented a new makeup!"
Gu Shenliu had been staying up late to film recently, so he didn't have time to contact Jiang Yu. Hearing this, he said: "New makeup?"
"Yes, it's Su Ye Makeup, named after Su Ye!"
"Su Ye Makeup?"
After hearing this, Gu Shenliu turned his eyes to Su Ye who was still filming. His eyes became complicated and difficult to distinguish. Su Ye was indeed a good person. She was willing to work hard and endure hardships. She was much better than many other female celebrities. If Jiang Yu really wanted to be close to her, he could rest assured, but was Su Ye's original intention when looking for Jiang Yu really just to do a styling in variety show appearance? No, it might not be that simple!
…