Imitation goods were not uncommon, but they were never exactly the same. That was why the coat quality made Jiang Yu thought deeply. The point was that the imitation seller could go on the market at the same time with her. In just one week, after the sellers saw the preview picture she sent, they would need to search for fabrics and then found factories to discuss cooperation to make the imitation goods. So, it shouldn’t be so fast to even be able to do next day shipment at the same time as her, and more importantly…
Jiang Yu took a pair of scissors from the side. She turned the clothes over, cut the lining inside the clothes, and untied the threads, only to find that the color of the threads was also the same from the clothes of her store. If she still didn't realize what was going on, then she would have been in the circle for so many years for nothing.
"President Jiang, is there something wrong with the factory?" Bi Peijun had worked in a clothing company, and of course she understood the reason for this.
Although many factories say that they were only supplying to one company, they secretly supply to others. For a factory like Jiang Chao’s, it was difficult to serve only one family. After all, there were not enough orders. If the factory had the ability to deliver goods in 10 days, but it happened to be delayed to 15 days for Jiang Yu, was the 15 days only used to make the goods of Jiang Yu? It might not be necessary.
If Jiang Yu ordered 3,000 pieces, the other party would probably produce 5,000 pieces, that’s why it was delayed to 15 days. When all the goods were driven out, some of them would be given to Jiang Yu and the other part would be sold to others on the market. In this way, the factory could both retain customers like Jiang Yu but also guaranteed the profit of the factory. At the same time, it would be said to the public that the clothes was the same with the one in Jiang Yu’s store to ensure that the clothes could be sold as soon as possible.
Jiang Yu naturally knew the twisted roads that had happened. This batch of imitation goods must have flowed out from Jiang Chao.
"Is there something wrong with Boss Jiang? President Jiang, should we go to him?" One of the customer service named Tang Qian was talking.
"Look for him? What if he admits it? Can we kill him? You should know that the goods for our next batch are still in his hands. Now it's no good for us to fall out."
Bi Peijun was a little sensible. After thinking about it, she said: "President Jiang, it seems we have to build our own factory."
Jiang Yu had planned to build a factory a long time ago, but the company was still unstable now, and the funds in her hand were relatively limited. In addition, she had to go to classes and would have to be busy with graduation projects next year. At this time, if she needed to build a factory she couldn’t spare the time.
Thinking of this, Jiang Yu said: "Let's take our time in building a factory."
"Then this time..." Bi Peijun asked.
It would be wrong to say that Jiang Yu was not angry. A pig teammate could undoubtedly cause a lot of trouble for her. In fact, plagiarism was a problem that the design world could never solve. Maybe it’s because her designs in her previous life were often plagiarized, she already knew that the road to rights protection was long. After she experienced it too many times, she was not as angry as she was at the beginning. After all, even big name brand like LV wanted to kill brands that rely on plagiarism, such as Zara, Ou Shili, and Daphne, they still couldn’t prevent these companies from making money and also couldn’t prevent customers from buying it. 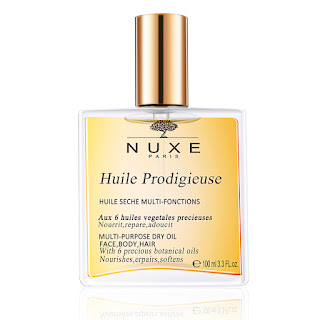 Jiang Yu smiled and took a picture of the oil, took a selfie to let everyone see her skin condition, and then posted on Weibo:
[Nuxe Multi-Purpose Oil contains gold powder. The oil can be used together with face cream before sleep or can be used with foundation in daytime. It can be applied on the hair or on the body to hydrate the skin... There are a lot of uses! More importantly, this golden oil has a very good appearance, and when applied to the body, it will have a sparkling effect under the flash, which can make your skin look brighter and suitable for friends who like to go to nightclubs.]
Jiang Yu just posted a selfie at noon and now she posted another product review post. Her followers were very happy.
——Dada, you have to post more Weibo, I’ll buy all the things you recommend, I don’t know why, I just believe you very much.
——I have used this one, it looks golden, but after applying it, you can't see the gold powder because the gold powder is very fine.
——I will apply this on my body and then lie on the beach to tan. I heard that this is easy to tan after applying a lot of it.
Jiang Yu replied: "A large amount of application will help in tanning, but a small amount will not affect in any way."
——I bought it! The price is more than one hundred.
After reading a few comments, Jiang Yu closed Weibo with a smile.
At this moment, Bei Xiaoxiao suddenly sent a WeChat message: "Jiang Yu, open your Taobao store."
Jiang Yu was taken aback and opened Taobao. There were already two blue crowns in her store's reputation column. The crowns were shining. Jiang Yu stared for a long time, and the corners of her mouth rose.
It's great, her store now had two crowns!