Producer Chen looked at the girl in front of him and suddenly had an illusion that the girl in front of him was not the same girl! He was indescribably shocked. He had been in this circle for a lifetime, and he had never seen such a transformation! He had seen people with ordinary faces undergoing cosmetic surgery, but it was so shocking that just by putting on makeup and wearing other clothes in less than half an hour, a person could change so much!
The skill of this styling should not be underestimated! Had he not seen the process from the beginning, Producer Chen almost thought that the guest had been replaced by someone else. How could this be Ya Ya?! Ya Ya had bad skin, weighted 160 jin, and had a swollen face! But the girl in front of him now…
Because of the double eyelids tape and false eyelashes, plus delicate eye makeup, Ya Ya’s eyes didn’t look swollen anymore. The eyes were very large and bright. Her nose, from Producer Chen's point of view, only looked tall. It looked tall as if had just gone through hyaluronic acid plastic surgery. Ya Ya’s face was also good. Although it was still slightly rounded, it was cute! Of course, her lip color made her look sweeter, and her hair was half braided and half loose, which made her face smaller and cuter.
Gao Jing on the side exclaimed: "Producer Chen, look at it! How is this makeup?! This is a transformation! A real one!"
No, it's more like changing person entirely! Before Producer Chen could reply, he heard Gao Jing shout again:
"Producer Chen, look at Ya Ya's figure. How did her figure change from 6plus to 5S? Ya Ya’s figure really looks thinner!" Originally, Ya Ya was not only overweight, but also had wide hip bones and thick legs.
Sun Mengmeng on the stage was even more stunned. She and Qin Chong looked at each other, and both of them saw the same unbelievable look on each other's eyes. Sometimes they would pretend to be surprised for the effect of the show, but at this moment, they were genuinely surprised! Who was this girl? Impossible!
"Jiang Yu, how did you do it?" Sun Mengmeng looked at Ya Ya's makeup. "She is totally like a different person! I used to see before and after makeup comparison pictures of some master makeup artists on the Internet, but as I didn’t see it directly with my own eyes, I always thought it's fake! But now that I see you putting on this makeup, I now know how amazing the makeup is!"
The other people present were also shocked. Even the professional ones were shocked by Jiang Yu's technique.
"This makeup technique is really amazing!" Even Peng Peng gave praises.
"Yeah! It's like magic! Oh, this technology is really..." Everyone had to admit. "Awesome!"
Even after receiving praises from professionals, Jiang Yu seemed very calm. She smiled with the corner of her mouth and said calmly: "Thank you for the praises. Actually, I didn't do anything. I just painted a simple makeup for Ya Ya, but my technique can be used as a reference for people that feel inferior because of their face shape! Everyone has the right to pursue beauty! As long as you study makeup well, you can make yourself beautiful even without plastic surgery."
"Oh my God!" Sun Mengmeng was still amazed. She then turned her gaze to Ya Ya's clothes.
At this moment, Ya Ya was wearing a white loose T-shirt on her upper body and a skirt with lace at the bottom. The skirt was tight fitting, but a pair of knitted sweater cardigan blurred the hip and legs silhouette. And because the white T-shirt was loose, it made the girl look thinner visually. 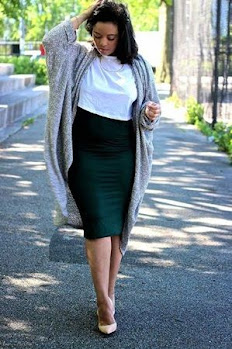 At this moment, no one could deny that Ya Ya was beautiful.
Sun Mengmeng still didn't believe: "It seems that I can't see it any thick legs at all? Just wearing suitable clothes can achieve this?"
Jiang Yu laughed and said: "The essence of clothes matching is this. Bigger size girls can wear any tight fitting clothes as they like, but they can be worn with a long coat outside to create a visual slimming effect."
"Tsk tsk!" Sun Mengmeng finally concluded: "It's really a styling technique comparable to substitutions! Before it was built, it was rural love, after it was built, it was a blockbuster drama. Before it was built, it was a little girl in the Internet cafe. After it was built, it was high-level white-collar workers. It's even worthy to be classified as one of the 'Four Great Sorceries in Asia'!"
Jiang Yu was amused by Sun Mengmeng. She said, "Is it as exaggerated as you said?"
"Of course! Teacher Gu, what do you think?"
Gu Shenliu smiled with the corner of his mouth and stared at the front with scorching eyes. In the stage were Jiang Yu and Ya Ya standing together, but people didn't know who his gaze fell on. He said solemnly: "It's true."
Qin Chong looked at the reactions of the people and felt very excited. The show was about to be withdrawn. As a host, he was very frustrated and worried that this incident would be a bad record to his hosting career. Unexpectedly, Gu Shenliu actually agreed to participate in the first issue after the revision, and he also brought Jiang Yu, a living treasure!
Seeing the results of Ya Ya’s transformation, Qin Chong only felt that if the stylist was changed, Ya Ya might not be able to make such a big transformation. The show might just go on tepidly, but now it’s not. Jiang Yu made Ya Ya transform into a totally different person. For hype, as long as the before and after comparison photos was released later on Weib and get a few big Vs help forward, it would definitely cause an uproar. With this, who would be afraid that the show wouldn't be trending? Thinking of this, Qin Chong looked at Jiang Yu with solemn eyes.
When Ya Ya saw herself in the mirror, she couldn’t believe that the person in front of her was herself. The girl in front of her had a very beautiful face, delicate makeup, and beautiful clothes. Although she was still overweight, she seemed to look just about 130 jin. She looked good, a chubby beauty. (TN: 130 jin = 78 kg = 171 lbs.)

"Is this really me?" Ya Ya covered her mouth and cried excitedly. The camera gave her a close-up in time.
Ya Ya turned her head in disbelief and wept bitterly. She hugged Jiang Yu and thanked her: "Thank you Jiang Yu! I really don't know what to say. I have been troubled by my images for so many years and have low self-esteem. Many times I want to die as I feel that God is really unfair. Why did I be born so ugly? But now, you have showed me hope. I suddenly feel that I can also become beautiful! Thank you Jiang Yu, I will be your most loyal fan in the future, and I will learn makeup from you every day."
Hearing this, Jiang Yu patted Ya Ya on the back and encouraged: "Sister, don't be discouraged! Life is still long, don't lose confidence in yourself!"
When everyone saw this scene, their eyes were moistened. The camera recorded all this faithfully, and the atmosphere of the show suddenly became sentimental.
Qin Chong brought the atmosphere back in time, he smiled and said: "We are grateful to the two stars for the changes made to the two amateurs! I announce that this issue on amateur guest transformation plan is successful!" After speaking, he continued with a smile: "After the amateur session, we will go to look at the wardrobes of the stars. At this time, <Star Wardrobe> has also revised our system. We will enter the stars' homes and open up their celebrity wardrobe!"
After that, the video of the crew entering Gu Shenliu’s home was played on the big screen. To be honest, Jiang Yu was attracted by the show after watching this scene. After all, although she often helped celebrities in her previous life, it was also the first time she saw a male actor's house. With a smile on her face, she followed the camera to Gu Shenliu's wardrobe.
Just like Gu Shenliu’s other interior, the wardrobe was gray, which gave people a feeling of coldness and abstinence. The wardrobe was very clean. Even if the camera gave a lot of close-ups, it looked spotless, as if someone had just finished cleaning it.
"Is there special people that come to clean?" Sun Mengmeng asked curiously: "Because I see Teacher Gu's house is really clean!"
Gu Shenliu smiled lightly: "No, I'm cleaning it myself."
"You? You are so busy, how can you have time for cleaning?"
Gu Shenliu pressed his lips tightly, making no sound. In fact, he had a lot of time as he couldn't sleep day and night. Cleaning was just one of the things he did on a long night of insomnia. It was one of the few things that could be done to pass the time.
Sun Mengmeng was about to kneel, "People said Teacher Gu is professional in the entertainment industry! He is an almighty type! He knows everything and now I see that even his housework is at a professional level!"

"That's not wrong." Gu Shenliu didn't deny it, but he said: "I have relatively high hygiene requirements. So when I clean myself, I also do it according to professional standards."
"Then will you ask your other half to clean up to that standard in the future?"
Gu Shenliu glanced at Jiang Yu intentionally or unintentionally. He immediately denied: "No! She doesn't need to do anything! Just eat fruit and wait for me on the sofa while watching TV. I will do a good job of hygiene."
"Wow..." There was another exclamation at the scene.
Su Ye on the side glanced at Jiang Yu and couldn't help but smile.
Jiang Yu was taken aback, but did not dare to show it. She couldn't help but slander Gu Shenliu in her heart, what did he mean?! The sneaky flirts had been promoted to face-to-face now?
After that, the cabinets were all opened. The crew took a picture of the wardrobe. It seemed that the cabinet was very tidy. It had a variety of clothes, most of which were suits. But there were also some casual clothes, neatly arranged according to colors. Leather shoes, belts, and cufflinks were also all neatly laid out. It could be said that Gu Shenliu's wardrobe was a bit like a show room, it didn’t look lived in at all.
"Ms. Gu's wardrobe is very large." It occupied a big part of the house.
"It's okay." Gu Shenliu nodded.
Sun Mengmeng turned to Su Ye again: "Teacher Su, what do you think of Teacher Gu's wardrobe?"
"Very good, clean and tidy." Su Ye smiled.
"If it were you, how would you react when you met such a boy?"
"I will think the other party is a reliable person." Su Ye said.
Sun Mengmeng turned to Jiang Yu again: "Jiang Yu, as a stylist and professional fashion designer, what does your dream wardrobe look like?
After hearing these words, Gu Shenliu stared at Jiang Yu with impenetrable expression. He was listening carefully.