Fu Ting had a mediocre career, but after all, she was a veteran actor, so no one would be stupid enough to oppose her. Now, when everyone sees Gu Shenliu taking Jiang Yu to his dressing room himself, their gossip cell was suddenly alive. An upright actor, the man listed as the most wanted husband in the hearts of girls across the country, a man who was so self-controlled to a point of weirdness, was actually having an affair with a small 18-line internet celebrity?
There was no one else in the dressing room, it was for Gu Shenliu's exclusive use.
"You rest first, I have a few more scenes to shoot."
"Okay, go ahead!" Jiang Yu smiled and watched Gu Shenliu walk out of the dressing room.
After a while, Gao Jing came over and brought in a bag of snacks. He handed the snacks to Jiang Yu and sighed: "Gu Shenliu is really too much. I have been with him for so long, but he never said to buy a bag of snacks for me. Now he asked me to buy some for you, for fear that you will be bored and hungry while waiting!"
"I'm not hungry." Jiang Yu smiled: "You eat!"
"Don't! School girl, eat quickly! If you don't eat, then he will blame me for not offering it!"
Jiang Yu laughed helplessly, so she took some snacks and started eating. When Gao Jing left, she was the only one left in the dressing room. She had nothing to do, so she took out her sketchbook and started drawing design. She didn't know how long it took her to draw, but she heard the door open.
Jiang Yu looked up and saw Gu Shenliu standing at the door. He was dressed in a white shirt and black suit. He dressed up very simply, but he abruptly looked like a noble man. This man had good looks and temperament, although he was a top actor, but Jiang Yu always felt like he had wronged his potential by becoming a star.
"Drawing?" Gu Shenliu put one hand in his pocket, his voice soft.
"En."
Gao Jing on the side came over, looked at Jiang Yu's design draft, and gave a thumbs up in amazement: "School girl, you are too good! This design draft is already very good even when I as a layman see it!" After he finished, he suddenly yelled, looked at Gu Shenliu, and said: "School girl, you are so good at drawing so why don't you help Shenliu with a sketch? It just so happens that Shenliu just reached 70 million followers, so this sketch will be posted on Weibo as a fan benefit!"
Jiang Yu glanced at Gu Shenliu and saw that he had no objection. He walked to the opposite sofa and sat down.
Gu Shenliu cocked his legs, had one hand resting on the back of the sofa, and the other resting on his knees. His eyes were like thick ink, and there was an emotion that could not be removed. When he looked at Jiang Yu, his eyes seemed to be littered. The black mist makes people unable to see his true emotions. 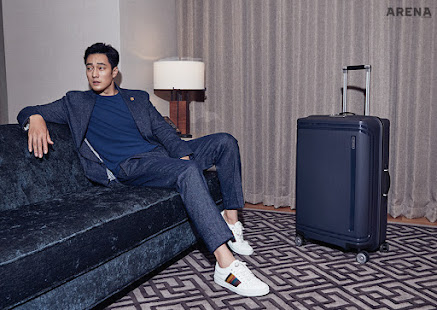 (TN: Hmm, may be like this but looking at the camera instead?)
Jiang Yu did not expect Gao Jing to make such a request. It was like when in a self-study class, the teacher suddenly came to the classroom and said that there would be a mock exam. It was a little unexpected. However, Jiang Yu had an extraordinary sketcher and was not afraid. She opened a new piece of paper, slightly hooked the corners of her lips, and carefully drew on the paper with a ballpoint pen.
Jiang Yu looked deep into Gu Shenliu eyes, observing his facial features. For some reason, the more she watched, the more she felt a slight throbbing in her heart. Although she had never been in a relationship before, but in Gu Shenliu's eyes that were so deep people could not see clearly, there was an aura of aggression faintly revealed. They felt like saying: "F*ck her!"
Jiang Yu suspected that she was wrong. Gu Shenliu, who had a cold temperament, didn't seem to be interested to her at all. The aura could mean everything, but affectionate wouldn’t be one of it. She retracted her wandering mind, looked at the man for a moment, observed his eyebrows, and then carefully drew the outline on the paper.
From Gu Shenliu's point of view, Jiang Yu seemed to be drawing the shape of his face. When he saw her move, he frowned slightly. Drawing a human face requires such a large arc? Why did he saw her filling up the entire piece of paper? Was his face that big? His expression remained unchanged, sitting on the sofa without moving, only waiting for Jiang Yu to finish the painting carefully and patiently.

Jiang Yu lowered her head and her eyes were covered by long eyelashes. There was a firm but calm look in her expression. The orange lipstick she wore made her skin fairer. Because of her deep eyes, she looked like a mixed-race woman, but this could be observed unless people looked closely. People would just think that the girl's features were very beautiful, and it was even more and more unforgettable under the embellishment of makeup.
About 10 minutes later, Jiang Yu smiled faintly and said, "It's finished, you want to see?"
"Let me see!" Gao Jing leaned forward first. While Gu Shenliu moved his long legs and walked in front of Jiang Yu. The two stood side by side.
Gu Shenliu was tall and very aggressive, so Jiang Yu's calm temperament was a little disturbed.
Gao Jing watched the painting for a long while before suddenly frowned. He looked at Jiang Yu in disbelief. After a moment of silence, he suddenly laughed: "Sh*t! School girl! You are so talented!" He couldn't stop his laugh. "You let Shenliu sit there motionless for so long but in the end did you draw such a thing?"
Jiang Yu pointed to the suit on the notebook seriously and said: "Didn't I draw it right? The fabric stripes, cuffs, collar... I even drew the wrinkles on his suit!" Yes, she drew the clothes very well. Even using just a ballpoint pen, the color on the suit she drew was more vivid than when using professional tools. It was almost a perfect copy.
Gu Shenliu had to admit that Jiang Yu painted his clothes very well. Unfortunately… He frowned. It would be better if the suit was not worn on a pig!
Yes, Jiang Yu let Gu Shenliu sit there for a while, agreed to paint him, and drew while watching him so carefully. When everyone thought she would paint Gu Shenliu realistically, she ended up drawing a pig.
Jiang Yu explained earnestly: "Sorry, I am not good at making portraits, but I think I paint very realistically."
Gao Jing chuckled from the side.
Jiang Yu coughed.
Many people had misunderstandings that everyone who could draw would also be able to draw portraits. In fact, portraits were specialized art. Although Jiang Yu’s design drawings were impeccable, her portraits were really ordinary. At other time she indeed made oil paintings for entertainment, but never portraits.

Gao Jing looked at Gu Shenliu and saw that Gu Shenliu's expression was wonderful.
Gu Shenliu frowned slightly and looked at the arrogant pig on the painting. The pig was very funny. It had the same hair style as him, wore the same suit, and even looked like a mold carved out of him. He looked at Jiang Yu, his complexion tense.
Jiang Yu was thinking that Gu Shenliu was going to be angry, but she then saw him took the picture from her sketch book. He then took a photo with his mobile phone.
Gu Shenliu moved his finger slightly, clicked on Weibo, and edited the text: [70 million followers benefit!] It was accompanied by Mr. Pig painted by Jiang Yu.
Jiang Yu was teasing, but she didn't expect that Gu Shenliu would really use it, so she was a little embarrassed at the moment. After all, her whim joke would be seen by so many people.
At this moment, Gu Shenliu's followers saw his Weibo and exploded.
Gu Shenliu’s image had always been a bit cold, and he basically just posted a few times on Weibo. The last time he liked a post could even cause an uproar, let alone Mr. Pig picture now. The pig picture, why did it resemble Gu Shenliu more when people took a closer look?
So cute…
——I just want to know who painted this picture? So talented?
——Is the Mr. Pig on the painting my idol? Gosh! Who is so courageous to draw him as a pig?
——Is only me feeling cute? How do I feel that the person who painted this picture is full of love for my idol?
Seeing this comment, Gu Shenliu put away the phone with satisfaction. He didn’t believe the comment saying the painter to be full of love at all. After all, he was an over-indulgent person in the painter’s heart! But he was quite satisfied with such progress as she now already had the courage to tease him.
At this time, a follower left a message: "What should I do? I think I am in love! This Mr. Pig, a discerning person knows that it is a ridicule between lovers!"
In love? Had he been so obvious? But probably only the involved woman in the world couldn’t see it! Gu Shenliu turned off his phone and carefully put the drawing in his wallet. Then he picked up his suit jacket: "Let's go for supper!"
Meanwhile Jiang Yu, because of Gu Shenliu cautious movement of saving the drawing just now, had her heart beating up and down.
This Gu Shenliu… what did he mean?!