On the other side of the lively snack street, shouting sounds could be heard one after another.
"Salted egg lava buns, ten coupons for three~"
"Universally invincible shrimp dumplings, domineering taste, ten coupons for three!"
"Vegetable meat wonton, rich in nutrition and easy to digest, the bowl is bigger than my face, only ten coupons!"
The children's booths were gathered together. On one hand, they could take care of each other, and on the other hand, there would be a better competitive atmosphere. The third was that these snacks were of the same type. Putting them together allowed soldiers to compare and choose. 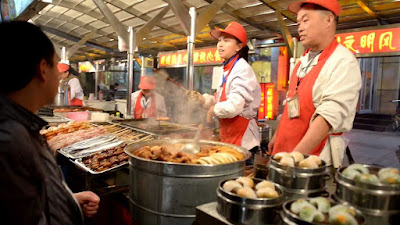 They were located at the middle of the snack street. Liu Weiwei’s original idea was that most soldiers would come in from both ends of the snack street in the morning, and they would only come to the children’s stalls after visiting a dozen or so stalls. When they went in at noon, they could eat the staple foods served for lunch. However, she underestimated the soldiers' beastly appetite and their passion for freshness.
Everyone had used up their 100 coupons, but no one wanted to leave and all waited until noon. According to an on-site investigation by the logistics office staff, the activities began at the snack street at 8:00 and the number of people on the street continued to flow until 10:30.
Because there was a children's group competition set up by Liu Weiwei, the office staff also specially interviewed the soldiers who arrived in this area. A single soldier hovering around in front of the six children’s stalls quickly attracted the idea of the live broadcaster, and the microphone was handed over.
"Did you just arrive at the snack street?"
"No, I am here when they opened the door."
"Eat for two and a half hours? Can you still eat more?"
Young soldiers had a good appetite. They were the strongest men. They were also in their heyday in absorbing nutrients. Their metabolism was high and fast.
However, the soldier hesitated. He swallowed his saliva and his mouth was bitter, "I was full before nine o'clock. I gnawed two big pig trotters. Tsk, it was crispy, soft, and fragrant. And… Marshal’s grilled vegetable stall is also delicious, but it’s not that much. The hot and dry noodles next to him are filling and I can’t stop eating the noodles. However, just ahead, I ate another bowl of beef ramen, which was sizzling and refreshing. Then, I saw beef meatball Soup. I thought it would be fun, so I ate again..." This was a conclusion that he couldn't stop.

However, this was not the most explosive. When the announcer could not bear anymore and decided to leave, the steps he had just taken shuddered. At a glance, he saw two tall men standing side by side. One was handsome and thin, the other handsome and vigorous. The two figures standing together looked unexpectedly harmonious.
The announcer trembled quickly. The greetings he wanted to say was immediately swallowed.
Not far away, the thin Lu Qingheng stretched out his hand to wipe off some golden liquid from salted egg lava bun from the vigorous man’s mouth. He then put his finger directly into his mouth.
Crash!
It was quiet around until someone’s wonton box fell to the ground. The soldiers scattered and squeezed together quickly and tremblingly, as if they had seen a ghost.
Soon, forum posts that were urgently filtered by the logistics office appeared again!
[I Like you. I just want to eat the custard at the corner of your mouth.]
[Snack Street opened the door of the devil!]
[Cafeteria: This is not my fault, don’t blame me!]
[F*ck, I just learned what is 0 and 1, it’s terrible...]
[Sorry, because I want to eat the salted egg lava bun, I bent myself.]
[Salted egg lava bun, it turns out that you are such a bun!]
Various water stickers and various high-definition photos with mosaics quickly occupied the soldiers’ forum of the First Army Regiment. Several other troops from First Army Regiment which were not at the base Planet were very puzzled.
Just after the inexplicable Marshal’s barbecue stall post was deleted, there was internal news of such a hot special unit 0 and 1, all of a sudden everyone was madly asking questions.
What exactly is this snack street?
What is Salted egg lava bun?
Is custard a new type of nutrient?
What happened? Why did Lieutenant Lu bend at a young age!
Sure enough, military life led soldiers to become bored and it is harmful!
Everyone was not aware that the posts become more watery. Tall buildings were erected just within ten minutes. Various internal chat groups were also flickering.
Before long, Marshal Li Er who was about to go to the snack street to try personally received an inquiry from Marshal Kaige from the Second Army Regiment next door.
[Lao Li, your little lieutenant looks like a talent, just how much did you torture him until he bends like that? This is not good. You are going to take the blame and resign, right?]
[Retire and change career to be a barbecue master? Hey, I heard that you have practiced your craft well. Don't be afraid, after you resign, I will take care of your business. Give me five stings of leeks every day. I want them to be spicy.]
Marshal Li Er: "!!!"
*****
Reminder!
All for love, love for all!
Love shouldn’t be restricted by gender and you can love whoever you want. People's sexuality should never be a joke or teasing material at any time.
The views and principles of the character in the novel do not represent the translator’s view and should just be read just like a fiction novel it really is.
Stay Safe,
MD