People said that women were made of water.
Anna originally didn't believe it because she didn't like drinking water. But since she started paying attention to her body shape, fitness coaches also said that to improve her metabolism, she needed to increase the amount of water she drank.
Anna did the process as if she was completing a task. She put several water bottles in her space every day, stipulating that she could not go to bed before drinking all of them. She also set an alarm clock regularly to remind herself to drink more. She didn’t like not carbonated liquids. It might be because she had been drinking nutrient solutions since she was a child, she was now tired of all kinds of liquids, unless it was carbonated.
But the soy milk sent by Saibandes didn't look like a drink at all. It was served in a small bowl. The liquid was a little creamy in color, but there was some bright red oil floating in it, as well as a few pieces of softened light brown bars. Half of Saibandes' body was wet from the goldfish game just now, but he didn't care. He just held the edge of the small bowl to his mouth slurped and drank half of it without spoon. "Oh!" He then raised his head and howled.
Anna was holding her forehead. She had never heard such a beast-like howl from her boss's mouth. It was not elegant and was not at all like the young master from an ancient noble family with a long history. If it were heard by the butler robot, it would definitely short-circuit due to shock.
But many things were contagious. The way Saibandes drank boldly, chewed the fried dough sticks in the soy milk, his mouth and his expression of extreme enjoyment made Anna's heart itch. Her mind went blank and she subconsciously lowered her head to take a sip. Then, the salty taste on the tip of her tongue shocked her.
Kind of weird... The soy milk was made into savory and salty drink, which was a bit weird, completely different from what Anna had imagined. All dairy products in liquid form were mostly sweet in Western dishes. Such a straightforward salty taste was unexpected. It almost shocked her somewhat. It was more like a soup than a drink.
It was salty, slightly spicy, hot, with chewy but soft fried dough sticks, and occasionally a few crispy ones.
Anna took a sip, feel the aftertaste in her mouth before she started a second sip. It was strange at first, but after getting used to it, she had some enjoyment, as if she would become addicted. Eating a peculiar fried dough stick with every mouthful, she could feel the salty aroma, which was more stimulating than any nutrient flavors. Although it was not carbonated, it had the right taste that made people feel fresh, stimulated, and satisfied.
"Oh, there is also sweet soy milk, would you like some, Anna?" Saibandes had already inserted a straw and started to sip. After eating salty, eating sweet could quench thirst. It was enjoyed deliciously.

Anna swallowed and wanted to refuse, but apparently she couldn’t reject the cup of sweet soy milk. When she noticed it herself, she had already sipped some into her mouth.
Sweet~ Sweet to the heart... comfortable, soft, non-greasy sweetness, like easily absorbed energy factor, flowed into the stomach through the straw.
Forget it, drink milk and beautify. Anna touched her face, thinking comfortingly.
"Anna, do you want fried corn?"
"Shut up! I won't eat anymore! Don't talk to me again!" On diet Anna finally decided to pick back up her determination after dessert. However, there were always demons that would tempt angels to sin.
Three minutes later, Anna ate the fried corn and wept her tears of repentance. Trying to lose weight in the snack street was impossible!
…
Eat and go shopping, then eat again and eat some more.
Saibandes was not the only one who adheres to this cycle. Most soldiers were like this, almost all of them ran out of coupons after their first five snack stalls. Tragedies always came in groups.
As a result, the stalls where various games were provided to win coupons became extremely lively. Even a steady stream of complaints flooded into the logistics office like flying snow. There were constant crying and howling at the scene, which was very tragic.
"Originally I thought that when I arrived at the snack street, I would be in heaven, but I was wrong, I so very wrong!"
"I'm a beggar in paradise, wait, no, hell!"
"Big brother, don't cry, if you can't cast the ring, let's go next door to shoot!"
"This is evil! Ten shots cost five coupons, so I might as well buy a string of lamb kebab. Why the hell did I come here? I didn't even hit any, don't mention winning!"
"It's not that bad, is it? It's better than casting ring, right?"
"You'll only know it when you try, don't ask me how I knew it!"
Saibandes, a giant baby who had never played ring casting, was eager to try. Anna failed to stop him. 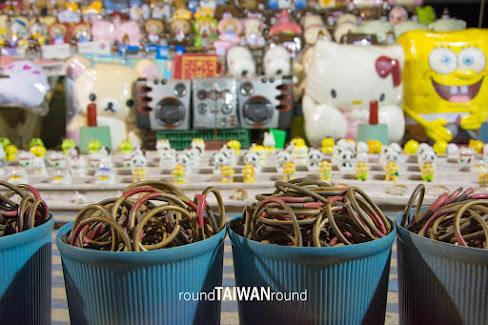 (TN: Normal ring casting stall on night market.)
"Ten rings cost five coupons, as long as you hit one target, you can win 20 coupons! Don't miss it!"
"Just five coupons, it is not a loss, you won’t be fooled!"
"Comrade, you want to give it a try?"
The boss robot set up on the stall turned out to be a cute little girl in a maid costume.
Saibandes and Anna squeezed in, and they were taken aback. "Momo?!"
"Ah, young master, Miss Anna, it's been a long time." Momo held her little pink cheek shyly, "Are you guys coming to cast ring too? You came here from the far away Planet Langerfield to support Momo? So happy hey~~~"
The corners of Saibandes' mouth twitched, and even Anna exclaimed in shock.
"Where is Master Mu Ming? How did Momo become like this?"
Saibandes waved his hand, "It doesn’t matter. Momo, give me to two sets of rings." He generously stuffed 10 coupons into the hand of his brother's exclusive maid robot.
"Okay~ Momo will serve you right away! Be more heart-warming~"
Anna looked at the two with a headache. But when the maid Momo pulled down a joystick, a behind the curtain immediately opened. Soon, more than 20 birds fly out and fluttered, she was completely dumbfounded.
"You have ten rings each set. Hitting any bird is considered a victory!"
The onlookers shook their heads.
"Another person was deceived."
"Angel face devil heart!"
"I actually fell for this evil face!"
"By the way, Major Mu Ming was not seen at all this morning. He must have been afraid of being beaten up people?"
"I’m very upset! When I saw this scene, I thought of myself ten minutes ago. I lost all my coupons, sh*t!"
Saibandes also heard the words around him, but the corners of his mouth raised. For ordinary people, it was of course difficult to hit living flying things. This was not only a test of eyesight and hand strength, but also took into account a person’s pre-judgment of the bird's movements and speed, while considering the wind direction and other on-site factors. Only after a comprehensive calculation could someone be sure to always success. So, this didn’t bother him at all! Even when his younger brother was ten years old, he took his younger brother to play something similar to this. This could be considered their childhood game, so it was nothing.
For those with mental abilities above 8 Starts, the game was a trivial matter. Saibandes smiled confidently and began throwing a ring with a flick of his wrist. He targeterd the biggest, whitest, and fattest bird in the team very confidently.
However…
"Momo's love, launch!"

There was a delicate sound next to Saibandes, and suddenly a cloud of mist suddenly erupted. Soon, the scene was full of fragrance. The wild bird, which was still flying just now, suddenly convulsed and rushed directly into the fog. It happened to dodge Saibandes’ ring.
"Big brother, are you new?"
"Haha, do you think it's that simple?"
"This bird thing, every time the maid robot put out some feed, it directly changes its flying direction. There is no way to predict it."
"That's right, otherwise, why would I even lose?! With three hundred feed locations, it is impossible to predict in which direction it will go next time."
"Momo's love is vicious."
"Didn't you watch the forum? Momo's ring casting stall is the hardest among all 48 game stalls today."
Saibandes shook his hand, his handsome face twitched.
Anna patted him sympathetically, "It's okay, we managed to stop the loss in time."
But unexpectedly, instead of being sad, the comforted giant baby's eyes beamed with excitement, "There are forty-six othr games? Where? Are they all in this small street? There are so many fun things!"
"Are you from outside? Retired soldier? Or are you invited family members?"
"There are a lot of games, let me show you the pictures. This is throwing flying saucer, you can get a plush doll if you hit half and win a hundred coupons if you hit completely. Now this game has the largest number of success."
"The most fun thing is this shrimp fishing. If you catch it, you will not only get coupons, but can also let the cafeteria help you cook and grill the shrimp with tomato sauce. This has the second largest number of success."
"Nonsense, the most fun is the courage and adventure! Just a black box, you reach in with your hand and touch the thing inside. You then need to guess what it is."
"There is also hopscotch ahead. It’s a simpler challenge. You play the game by jumping big ropes."
"They obstacle run is also good. The reward is fish ball soup, which tastes really good."
"Blindfolded painting is also okay. The reward is an egg cake."
Saibandes had a colorful expression, from the excitement at the beginning, to shock, to five-direction body throwing on the ground. He almost cried… "Why are there so many, why?!" He has never played any of them! His brother never said that the barracks were so fun! No wonder he never liked to go home and spent his holidays in the barracks every year.
Saibandes almost bit the silk scarf on his chest, his heart ached like it was sliced with a knife. "I don't know if the army will accept young and promising people? For example, me."
Anna rolled her eyes, "You have long passed the age of enlistment."
"Oh no, my heart hurts so much I can't breathe."
"…"
"Momo, tell me inside news. What is the best thing to eat here?" Saibandes decided to use food to comfort his injured heart.
"Boba milk tea, add sugar, ice, and ice cream. Momo's favorite."
Saibandes clenched his fists, "Well, it sounds like healing, Anna, let's go!"
Anna: … I don't want to, I don't want to go, I don't want to eat again!
Saibandes raised his eyebrows and looked at the long add on options on the stall recommended by Momo: "Add red bean?"
Anna raised her hand weakly, "Add pudding."
Saibandes patted Anna on the head, "Okay, I'll buy it for you."
Anna: _(3」∠)_