Liu Weiwei immediately went to the kitchen to bring out the spicy crab and the fried crab with salted egg sauce. It was light and then heavy. After she served it for a while, these heavy-flavored spicy crab dishes were highly praised by the men. Even Qin Mo ate a few more bites. 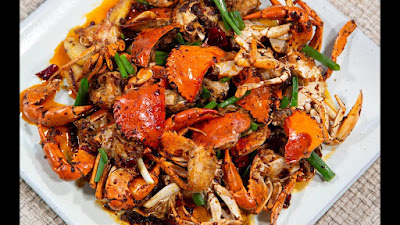 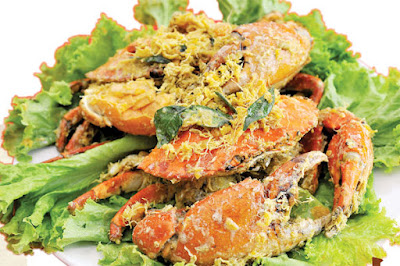 Women prefer salted egg crab as the fine meat in the crab shell could be eaten out with the rich sauce. It was absolutely delicious. Seafood was mostly protein so it wouldn't easily make women figure became out of shape. The army wives all ate very happily.
Liu Weiwei was picking some crab meat for Little Meat Bun, but her focus was on the Krypton Beast. She watched Xiao Hel constantly wagging his tail, gnawing a bite of spicy crab, and then eating half of the fried crab with salted egg sauce, he was really enjoying the feast. But... the task still didn't show completion!
Did Krypton Beast also preferred to eat two-legged chicken or four-legged beef/pork?
The diner level of the Krypton Beast was the same as that of the Major. No matter what Liu Weiwei did, they would eat it all and praise her. However, the more this happened, the more she ignored their true preference. After this task, she realized that she had failed to give enough care for her family members.
Liu Weiwei suddenly fell into depression. Touching Xiao Hei’s head and looking at Qin Mo's constantly moving chopsticks, she was deeply surrounded by self-blame. But she will not give up easily!
Liu Weiwei put down her chopsticks and smiled at everyone, "You continue to eat, I'll go to the kitchen."
"The dishes are enough, you can sit down and feed yourself first." Qin Mo stopped Liu Weiwei immediately.
"It's okay. I've eaten in the afternoon, and it's not easy to be hungry after cooking. I will cook some more dishes while I digest." Liu Weiwei sneaked into the kitchen, looked at the two freezers by the wall, and carefully recalled Xiao Hei’s eating habits. But after thinking about it, she didn't find him to be picky eater.
"Ugh." Liu Weiwei sighed, until she noticed that her ankle was a little itchy. She then saw a ball of white fur lying on her feet. "Xiao Bai, are you full?"
The rabbit king didn't like to eat hard-shelled crabs. Although the hard shell wouldn’t be able to cut her hare lips, she was just too lazy. So, in the afternoon, Liu Weiwei prepared carrot cakes and curry sticks for her.
Xiao Bai rolled around on the ground.
Liu Weiwei's eyes lit up and she immediately squatted down to touch the soft fur on Xiao Bai’s body, "Xiao Bai, you have been with Xiao Hei for so long, aren’t you good friends? Do you know what he likes to eat?"
Xiao Hei was a reserved beast that didn’t like to show expression. It was not like Xiao Bai where her likes and hates were all written on her rabbit's face. When she encountered food she didn’t like, she would spit it out from her hare lips and showed her hatred on the spot. Moreover, Xiao Bai, as a Level 7 beast, had a high IQ, so she could basically understand Liu Weiwei’s meaning after spending so long with each other.
Sure enough, hearing Liu Weiwei’s question, Xiao Bai blinked her bright rabbit eyes.
"Help me ask Xiao Hei what he likes to eat. I will make it for him today. When you celebrate your birthday, I will also make a carrot feast for you."
Xiao Bai rolled and squatted decisively when she heard the word feast. She snorted at Liu Weiwei and jumped out of the kitchen.
Liu Weiwei was disappointed, but then Xiao Bai slipped in to the kitchen again after a while. She patted her trouser legs with her paws, closed her eyes, and fell straight back to the ground.
"Xiao Bai?" Liu Weiwei was startled, but soon saw she saw Xiao Bai get up and repeated the action again.

"It's so delicious that you fainted?" Liu Weiwei asked tentatively.
Xiao Bai whined in dissatisfaction. Her two furry paws stretched out, directly covering her little nose and her whole rabbit body painfully twitched. She then leaned back and fell to the ground with er rabbit eyes closed and her four rabbit legs went motionless. She was performing an Oscar worthy acts with the strength she got from the food she just eaten.
As expected, Liu Weiwei's mind flashed, "Smelly? Do you think it smells bad?"
"Squeak..."
Liu Weiwei suddenly made a fist and knocked her left temple. Beast had a keen sense of smell, and Xiao Bai once gave an extremely unbearable expression when she cooked two dishes. One was the stinky tofu that was widely promoted in the cafeteria, and the other was the snail noodles made for Heaven Rewards the Diligent in the school dormitory.
The former stinky tofu, Xiao Bai could still eat a few pieces, but the latter snail noodles, once Xiao Bai smelled it, the whole rabbit fainted for a whole day and the next day she had poor appetite. Did Xiao Hei like snail noodles?!
Liu Weiwei was shocked by the conclusion.
"Thank you Xiao Bai, I'll try it."
The ingredients and seasoning needed for snail noodles were available in Liu Weiwei's space, so she decided to give it a try.
Xiao Bai immediately understood and disappeared, as if she could smell the impactful odor immediately, making Liu Weiwei dumbfounded.
…
Liu Weiwei worked hard in the kitchen and a group of men on the dining table in the front living room was leaning back on their chairs, all pots of crabs on the table were gone already. But soon, their movements stopped and they gave a little stiff.
"What's this smell?" Li Sanpang leaned forward and quickly covered his nose, "Um... It’s a bit familiar, d*mn it, so smelly!"
Just after Mu Ming finished eating the crabs elegantly, he was still excitedly reconstructing the empty crab shells, but when he was still short of one crab leg, his hand shook. He almost fell on Lu Qingheng next to him. "This…… Qin Mo! You... did you received a strange... gift again?!" He had fainted once, so now he had some trauma to this smell. He was nauseous but couldn’t vomit it out. He suppressed the nausea with all his strength and this time he managed to not faint.
Mu Ming simply admired himself and immediately opened his air purification isolation cover with his last trace of strength.
Qin Mo reacted quickly, but the familiar smell made him unable to return to his senses for a long time. Lu Qingheng followed Mu Ming and also opened his protective cover immediately. Li Sanpang wore a face mask that was still being tested by the Scientific Research Bureau, originally intending to be used to perfect the hot pot ration. The army wives were holding their noses, they also had basic gas masks and they put them on quickly.
Only the six soldiers from the Western Army Group... were in a pit. They were eating happily without any preparation, and now they almost doubted life directly.
Soon after, under Qin Mo's ineffable expression, under the lingering gazes of Li Sanpang and Mu Ming, Liu Weiwei brought out two bowls of snail noodles. She put a bowl in front of Qian Dongmei, and put the remaining bowl among the men.
"If any of you don’t feel full yet, you can eat this. This snail noodles smell strong but its delicious. If you don't want to eat it, I will give you some noodles with pickled vegetables and pork."
Marshal Li Er loved snail noodles the most and Liu Weiwei made sime when she went to his dormitory to cook for Teacher Qian several times.
Therefore, Qian Dongmei's expression was normal when she smelled the snail noodles. After the snail noodles were served, she immediately took the chopsticks and spoons skillfully. She enjoyed the noodles while drinking the soup and she also ate s few sour bamboo shoots. After inhaling the hot noodles, her whole expression was very satisfied.
The two army wives looked at Qian Dongmei and couldn't help but feel a little moved. And the other men were not fools. They doubted that the smelly snail noodles could taste very good, so they only stared dreamily.

Especially Mu Ming couldn't believe it. The culprit of him fainting was Liu Weiwei, who he always thought had a common aesthetic ability with him.
Qin Mo's mouth twitched in the eyes of everyone, and he moved the bowl of snail noodles on the table to his face. After taking a bite of the noodles, his expression became extremely complicated.
Mu Ming kept staring at Qin Mo, and when Qin Mo drank the second sip of the soup, he asked with some trepidation, "It tastes... not bad?"
The answer to his question was a reaction from the Krypton Beast. It jumped off the stool almost instantly and rushed to the kitchen quickly.
Liu Weiwei had already filled Xiao Hei’s food tray with some snail noodles, and as soon as he came to the kitchen, he fell into it with his whole head.
Slurp... Gulp...
The corners of Mu Ming's mouth twitched when he saw this. He somewhat suspected that the smell he had just smelled was a dream. Beast's sense of smell was more sensitive than human, but the Krypton Beast didn't seem to notice the slightest. It acted as if it enjoyed delicious food, it was eating so much that its tail was wagging in the air.
Mu Ming looked at his partner again and found that Qin Mo had eaten most of the snail noodles. He sniffed and opened his air cover. When the irritating smell swept through again, he instantly collapsed and fell on his chair.
Qin Mo raised his eyes with a very unpredictable expression. He didn't say anything, but clipped a piece of sour bamboo shoots with his chopsticks and stuffed it directly into Mu Ming's mouth.
Mu Ming: !!!
His complexion changed drastically, but as soon as he pursed his mouth, a fresh, spicy, sour, salty and fragrant taste overflowed on his taste buds...
"Ehh?!" Mu Ming was shocked, it was really delicious? He quickly chewed the sour bamboo shoots and swallowed it into his stomach.
Qin Mo sucked the noodles, and opened his protective cover. He frowned slightly but then he adapted to the smell. After a sip of the soup, the expression on his dark face was soothed a lot.
"We need to chat tonight." Qin Mo said directly to Liu Weiwei who asked the butler robot to open the window.
"Huh?" Liu Weiwei said, confused.
Seeing Liu Weiwei’s innocent and tender face, Qin Mo couldn't help raising his eyebrows. He was made into a big joke. His wife looked like a weak, harmless, serious, and innocent girl. At that time, she was just pranking him, but he didn't realize it until today. "I want to give you a punishment, wife."
Liu Weiwei: "… !!! … I didn't mean to make the house smelly, let the housekeeper handle it, don't be angry~"
"..."
"Wait, can I put in a word?" Mu Ming raised his hand, "I want a bowl... Anyway, I can eat with my protective cover on."
Liu Weiwei immediately agreed happily. The guilt of stinking the house was instantly reduced because of the diners' approval.
Soon, the men's hands were raised one after another.
"Sister-in-law, I want one too!"
"Clerk Liu, me too thank you."
"+1"
"I want to have more noodles and make it more spicy~"
"Add more bamboo shoots on mine!"