When they gathered in the morning, the six men from the Western Army Group were all languid. Apparently they didn't sleep well at night. On the second day of training, they didn't know if it was an illusion, they felt that the number of people on the training ground was a bit small.
The Eastern Army Group had a bad reputation a long time ago that said the physical fitness of the people here was weak, so it had been more difficult for them enroll soldiers in recent years. But even so, they wouldn't be this small, right?
Looking at the sparse, open-air training field with only around a hundred people, Clayton didn't know what to say.
"Today's training is divided into confrontation and survival exercises in the morning and counter-terrorism attacks in the afternoon." After the special order of Marshal Li Er, the Special Forces who came to accompany the training were already ready.
Confrontational survival practice referred to the temporary division into two teams to fight each other until all the soldiers on the last team ‘surrender’, and then the other team wins. This was a typical training subject between barracks.
"You can use any weapon and equipment that simulates attack in the library." The leader of the Eastern Army Group Special Forces was Lu Qingheng. He had a pair of dark eyes.
Clayton glanced at Lu Qinghengand felt that this guy was as sluggish as he was. He was also not in good spirits so he was relieved immediately.
"Okay, then we will make a group of six."
Lu Qingheng nodded, and immediately selected five other soldiers.
"Any means of attack can be used?" Clayton confirmed for the last time, "Then you should admit defeat as soon as possible. If there is a disability, we are not responsible. There is an old saying in the East that sword has no eyes."
Lu Qingheng squinted, "Very well, don't cry later."
After retreating five hundred meters away from each other, Clayton made a gesture to his teammates, selecting weapons to enter the trenches, and waited for the right time to attack.
However, when Nelson just buried himself in the trenches and wanted to tell everyone the trauma he suffered yesterday, he suddenly trembled. "There is a very bad feeling!"
"What?!"
"Enemy attack!"
As soon as Clayton turned his head, he heard George screaming beside him.
A gray hoof swayed in front of George, shooing him away.
"Oh!"
"Oh!"
"God, what is this?"
"What…"
There were endless screams one after another.
In the trenches of the Eastern Army Group, Lu Qingheng moved his lower joints. He then stood up to take a look, but then decided to sit down. His family’s Da Hui, as long as she is in a bad mood, even if she is fighting other people, it is better not to show up.
"Lieutenant, your family is still very powerful, one vs six, hahaha."
"Da Hui is too strong. Even I will run away when I see her."
"We can just lie down and win!"
Clayton couldn't believe that he was hit by a sturdy and somewhat fat kangaroo on the ground. There were six of them. They wanted to attack in a group, but they were all swept away by its tail. He wanted to shoot, but found that all the guns used in the training camp were all simulated, which was completely useless to the kangaroo. He was beaten to the point that he almost vomited a mouthful of blood.

"Surrender."
"Don't be disabled, or it won’t be easy to explain."
Lu Qingheng's voice floated from afar.
Clayton almost fell to the ground with chest tightness, "Is this, is this also a beast pet?"
Lu Qingheng snorted, took out a small dumpling from his space and threw it to his gray kangaroo before daring to walk out of his trench.
"You just realized?" Lu Qingheng shook his legs in front of the six men with swollen noses.
Clayton almost broke his teeth.
Nelson even shouted on the ground, "Despicable, you did it on purpose! It already beat me in the dormitory yesterday!"
Bill rubbed his eyes. "Aren’t you the crooked lieutenant?"
Lu Qingheng's face went dark immediately. His whole person shook. "D*mn! I’ll beat you until you are served!" Yesterday, he was so angry that his fainted at the clinic. He then received news in the middle of the night that a guy from Western Army Group was coming.
The six arrogant men were all on the ground screaming and gritting their teeth, "If you have the ability, don't let the beasts do everything for you!"
But even as they were shouting, their hearts were shocked. Unexpectedly, the Eastern Army Group was secretly taming the Beasts. And these beasts had high fighting power and high ferociousness, so that future fights would be a huge advantage.
However, when they wanted to get up, Lu Qingheng sneered and sat down on the spot. Soon, an incredibly fragrant smell poured into everyone's nose.
"Have you eaten breakfast yet? Come, take any nutrient." Lu Qingheng sneered, but then he took out the incubator in his personal space. He took out a meat bun and broke it in half from the middle.
The other five Special Forces soldiers around him all smiled. They also took out a bun and broke it in half, revealing rich gravy inside. Fresh meat buns, spicy vermicelli buns, pickled cabbage buns, dried plum vegetables buns, pork ribs buns...
The guys didn't like to eat pure vegetable buns so the cafeteria mainly served meat buns. However, because of the snack street recently, the vegetable buns in the cafeteria had been overturned. It's okay to eat steamed buns in front of others. The smell of steamed buns was usually not very strong. However, the most poisonous thing was that it was directly divided into two halves from the middle so that people could see the rich and attractive contents inside.
"What's that?" Clayton was already drooling. He was knowledgeable, so he had seen meat buns. The other buns actually filled with pork ribs, which he could barely understand. But what were the remaining two? One was filled with transparent and winding red oily noodles… and the other was filled with dark leafy vegetable mixed with dark meat. He didn't understand at all.
The eyes of the six men from Western Army Group were glued to these buns, but they were stuffed into the Eastern soldiers’ mouths as soon as they saw them. The fluffy and soft dough seemed to have strong elasticity. The bun was as big as a palm, but it was swallowed in just two mouthfuls.
Even Lu Qingheng's Special Forces, who were actually regular diners in the cafeteria, chewed a few times and showed an inexplicable expression. The softness of the bun was like the feeling of stepping barefoot on cotton. It was soft and comfortable.
Everyone had sudden training until two o'clock in the morning and only went back to bed at three o'clock. Then they needed to wake up again at six o'clock, so they were all tired. But now they were almost instantly healed by the taste of the meat buns. This was a life-saving bun, it gave them a breath of immortality, completely woke them up from head to toe.
"I don't like to eat vegetables, but the taste of this dried plum vegetable bun is so amazing that it can't be described in words." A young soldier next to Lu Qingheng, who looked only twenty years old at most, had a mental brush. He was holding the buns like being intoxicated and was about to lie down on the ground.
"Really? You're exaggerating again, Xiao Tie!" The tall man next to the young soldier was slightly paler, with thick eyebrows and big eyes. Chewing with his cheeks, he couldn't talk properly.
"I'm not exaggerating, you will know after eating." Soldier Xiao Tie argued.

The six people headed by Clayton from the Western Army Group almost nodded their heads involuntarily.
Only after eating will they know. So give them a taste and let them be a fair referee.
Clayton swallowed. In fact, he hadn't heard of dried plum vegetable bun, but he smelled the special fragrance in the air. He wanted to know what it tasted like that it couldn't even be described in words!
"Tsk!" Lu Qingheng finished his first meat bun within two mouthfuls. He liked to eat meat buns the most, and only then he took care of the other buns in turn. Good things should be eaten at the beginning. This was a habit that the former chief taught him. He was a little skeptical after listening to his subordinate, so he took out the second bun from his space.
"I'll try it. If it's not as delicious as you said, Xiao Tie, do a hundred push-ups for this brother!" Lu Qingheng was obviously in a bad mood today. He hadn't gotten pass the depressed psychological shadow yet, so his whole person was very irritable.
"The bun with the most wrinkles is dried plum vegetable bun. The buns with red skin are spicy vermicelli bun, and the pink ones are meat buns. The sister-in-law's skillful hands are invincible." Another soldier slapped his forehead, "I love sister-in-law." 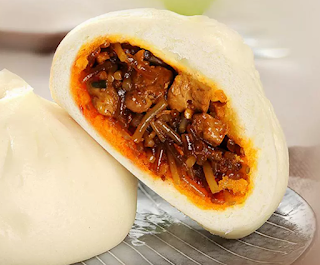 Lu Qingheng said, "If you have the courage, confess in front of the big devil! What nonsense! Eat quickly, rest for half an hour after eating, and proceed to the next training!" As he said this, he thrusted the bun in his hand directly into his mouth, but the fierce expression he tried to make the previous second broke soon after. All the rudeness and irritated feel instantly disappeared with the bite that brought the smell of dried plums.
Lu Qingheng was tunned.
Liu Weiwei, this unremarkable girl at the beginning, became like a goddess. How could she create such a magical taste? This kind of taste had never been seen in his career of more than 20 years. He also never saw this in any book! 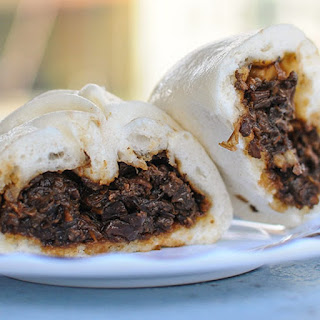 The fragrance of dried plums and vegetables was special. The color of these dried filling was almost black, but the scent was tangy. When eaten, they actually added a little more appetite to the meat. After a few bites, Lu Qingheng felt that the dried plums mixed with the meaty smell revealed an incomparably small freshness. It was sweet and fragrant, and the taste was very soft and tender. It was completely integrated with the pork that had been cooked to a crisp, as if it was about to melt in his mouth.
"How about it Battalion Commander? I didn't talk nonsense, did I?" The soldier Xiao Tie smiled, "If you can describe this taste, I will definitely be your little brother in the future, the kind that will rub your back!"
Within a few mouthfuls of Lu Qingheng, the dried plum and vegetable pork bun disappeared. "Hehe, this is the taste of dried plums."
"..."
The six men from the Western Army Group nearby swallowed desperately. The special fragrance in their nose was getting stronger and stronger. It was mixed with the fat and thin fleshy fragrance. They could see it and smell it, but couldn't eat it!
"Well, where did this bun come from? Can it be purchased with the subsidy?" The nearest Bill couldn't help himself.
Lu Qingheng, who wanted to beat people all day, bared his teeth, "I won't tell you outsider, hahaha."
"..."