Seeing WeChat, Jiang Yu was taken aback, and said in surprise: "How did you know that I have hired HR personnel?"
Gu Shenliu 121: "Just ask casually, really recruited? How about the person?"
Jiang Yu: "She looks pretty good, I'm satisfied in all aspects. She also looks very experienced, I hope to get along."
The position of HR in the company was very important. Jiang Yu hoped that Bi Peijun would be a person who match her temperament and knew how to measure. Otherwise, a more senior HR would inevitably underestimate her as a younger boss.
Jiang Yu asked again: "You didn't go out to date during the holiday?"
Gu Shenliu 121: "I am one who has chosen to follow a solitary path
(can also be an indirect way of referring to an unmarried person)."
"So miserable?"
"It's not!"
"No one you like?" Jiang Yu asked casually as the other party was a girl. She held the phone in one hand and the key in the other to open the door.
Gu Shenliu thought for a moment and then typed: "Not sure."
"Not sure? What's with this answer?"
Gu Shenliu 121: "I still have some doubts that I don't understand."
"Um?"
"The Chinese language is broad and profound. Although there is only one word difference, I was still wondering whether I just ‘want to sleep’ or do I ‘want to sleep with her’."
Jiang Yu didn't understand, so she turned on her laptop to read Weibo data. She joked: "If you want to sleep, just sleep as long as you want. Don't need to worry."
Reading these words, Gu Shenliu only felt that blood was surging in his brain and his breathing gradually became cramped. In terms of provocation, Jiang Yu was a good player. Just sleep as long as he wanted? Well, it's a good idea.
A long time later, Gu Shenliu, who always obeyed his wife, practiced the principle of "sleep as long as you want". The cries of Jiang Yu sounded all the time.
Jiang Yu then knew that she could sleep in disorder, but she could not talk in disorder.
…

Seeing that she didn’t receive a reply, Jiang Yu watched Weibo intently. But she saw that there were a bunch of unread private messages on her Weibo and a bunch of mentions.
Because the styling for Gu Shenliu and Su Mang caused a sensation, Jiang Yu became popular on the Internet at an extremely fast speed. Her number of fans even surpassed many famous celebrities. What's more rare was that her fans were active. Their interactions were very high. This was fundamentally different from those celebrities who were recommended by Sina to get their fans rising.
Many of Jiang Yu’s followers had a good impression of her. After all, her Taobao clothes were not over abundant, were designed by herself, and the price was not expensive. For the followers, Jiang Yu was undoubtedly fundamentally different from other Internet celebrities. She also invented out of bath makeup, so her followers felt from the bottom of their hearts that Jiang Yu was like a very precious jade.
——Dada, when will the next batch of clothes be released?
——I want to buy also. There will be windbreakers and leggings in this issue, right? I have no clothes to wear.
——I finally have a holiday and I am planning to buy some clothes to wear to school. Will there be a new one today?
The new batch preview had been released long ago and fans had responded very well as always. Jiang Yu replied:
[Today the clothes will be updated on time and the picture selection will be released tomorrow.]
——Dada, I set the alarm clock to grab it.
——Thinking that I and Su Mang are wearing clothes designed by the same designer, I want to shout, ahhhhh! The clothes my sister wore were made by famous designers.
There had been more than 50,000 messages on Weibo on the preview, and most of them were urging Jiang Yu to update on the National Day.
Jiang Yu reposted some selected comment with a smile, and said: "The looting will start at 8 o'clock tonight, grab it fast!"
There were 12 new items in this batch, two of which were designs that Jiang Yu liked especially. One was a white knit sweater with rainbow detail woven with colored threads from the hem, to the chest, to the other hem. The style of this sweater was quite satisfactory. The color match was surprisingly harmonious and the varied color made people feel good. 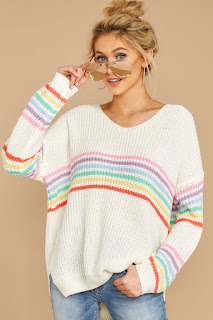 The other was a pink-purple bathrobe coat. Because of the viral out of bath makeup, a bunch of fans were looking for clothes to match the makeup. The bathrobe-style windbreaker coat unexpectedly became popular, so Jiang Yu made it. For this coat, the color of the fabric had to be well grasped. As long as the color was good, half the battle was done. The loose bathrobe coat was tied with a belt, so it perfectly showed the waist. This was in line with everyone's requirements. 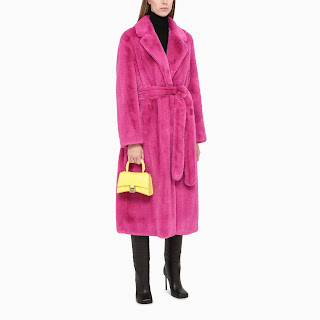 Jiang Yu was waiting for 8 o'clock to arrive. When she was bored, she saw the girl asking for help’s mention as soon as she refreshed her Weibo. Jiang Yu clicked on the picture and took a look. The photo was of a girl with pimples and pus. The photo caused Jiang Yu to shiver.
Jiang Yu was angry at the girl’s ignorance and replied angrily:
[Your face is your own. Your face is already like this but you didn't go to the hospital and just mentioned me on Weibo asking for help. Girl, you have to know that your face may not even be cured even if you go to the hospital for treatment if it’s already like that!
You want me to confirm if this is detoxification? Please take out the person who said this to you and let her face also detoxify!
Who told you that skin care products can contain active yeast? Yeast can only be used if it has been deactivated, if not the yeast will multiply quickly. In other words, if there is active yeast in your skin care products, then the microorganisms would definitely exceed the standard and shouldn’t be used!
If it is not real active yeast, it can only be suspected that the brand is doing false advertising.]
Cui Lanxi felt cold when she saw Jiang Yu's reply. She didn't dare to delay anymore. She grabbed her purse and ran to the hospital.
——The blogger is talking about Fu Ting’s active yeast mask, right? They were said to be sold out every day on WeChat moments.
——Gosh! I'm using it too, won't I get bad face too?
——@JT General Agent Xiaoxiao: Our active yeast is doing detoxification. Acne phase proves that our facial mask is effective. If it is not effective, how can toxins be expelled from the face?
Unexpectedly, as soon as this Weibo was posted, around 2,000 people posted photos of their own acne filled faces. They complained that there was a problem with JT yeast mask, which made their skin worse.
Jiang Yu clicked on some photos and frowned as she looked at them.
There were always people who believed that there were hormones in brand-name products, and the price was expensive because they wanted a lot of profit. They believed that WeChat was full of panacea and they believed that they could get the same results with these products. Little do they know that these unverified skin care products, diapers, and food might be very harmful.