Very long chapter~ Not enough to split into 3, so I made them into 2 fat chapters instead.
Sorry for the delay!
- MD
*****
When Gu Shenliu returned home, he subconsciously looked at the wall clock. It was less than six o'clock, today there would be a luxury brand event around 8 o'clock, Gao Jing would come to pick him up.
It was still early, Gu Shenliu opened the refrigerator door, opened a bottle mineral water and took a sip, then his eyes fell on the magazine on the table. On the cover, Jiang Yu seemed to have just taken a bath. Her skin was white and red, and it seemed that there was still water vapor. Her whole person’s skin was too tender, as if it could produce water when pinched. Wrapped in a rose-red nightgown, she leaned on the lazy couch sultry. Her cheeks were red and her lips were slightly raised. There was a unique lure between a girl and a woman.
There were a lot of sexy actresses in the circle. Usually when they took pictures, Gu Shenliu never cared about it, but for some reason, Jiang Yu’s picture gave him a completely different feeling from others. It had the pure feeling of a girl and a woman. The sexy fusion of Jiang Yu at this time was like an ordinary girl next door who came out wrapped in a bathrobe after taking a shower, and he was like the visitor visiting her home who accidentally saw this scene of her getting out of the bath with full heart and soul.
Gu Shenliu drank a few more sips of water before the fire in his heart was suppressed. He lay on the sofa, picked up the magazine and turned to the page of Jiang Yu's interview.
This was the first time Gu Shenliu had read a beauty magazine that was usually read by girls. From a professional point of view, the interview was very simple. The content of the manuscript was not enough to engage him. The magazines that interview him were of high quality. The concept of ‘out-of-bath makeup’ pointed out that the makeup was very suitable for Chinese girls, suitable for various occasions such as dating, work, or school.
After all, the goal of bath makeup was makeup without makeup, so that everyone could achieve their perfect state just like they had just come out of the bath. This was the goal of out of bath makeup.
Gu Shenliu read the magazine several times before putting it down. He walked towards the bathroom and turned the faucet to the cold water direction. The fire raised by the girl seemed to be inextinguishable in a short while.
…

At this moment, Jiang Yu certainly didn't know how many people her cover photo had touched. Not only the boys, but even the girls were so fascinated by her that they almost changed their sexual orientation.
Jiang Yu was on Weibo and suddenly received a private message from Zeng Yanan’s assistant: "Hello Jiang Yu, this issue of <Weiwei> with your cover is already on the market. The editor-in-chief asked me to ask you to help promote it so that everyone can buy the magazine."
<Weiwei> was quite polite to herself. Jiang Yu was an amateur in the modeling industry and was not well-known. However, Zeng Yanan paid her according to the standards of popular models. Although not very much, Jiang Yu had already felt the other party’s sincerity. Moreover, to promote was a common practice in the circle, and even celebrities couldn’t avoid them.
Jiang Yu replied: "Okay, I will promote it right away."
Jiang Yu was still in school at the moment, so she edited her Weibo with her mobile phone:
[The makeup of our Chinese girls has always been influenced by Japanese and Korean magazines. There are very few domestic magazines that can influence the Chinese people. <Weiwei> is one of the now rare Chinese local magazines. Thanks to editor Zeng for inviting me to shoot the cover. With ‘Out of Bath Makeup’ as the theme, I starred as the cover girl for the magazine this issue. Out of Bath Makeup is a new invention of mine. I hope Chinese girls can find makeup that suits them and become a pure little fairy. Purchase link: #J8DF238"
Although Zeng Yanan did not ask Jiang Yu to post purchase link, Jiang Yu learned from Durres that <Weiwei> has established an official flagship store on Taobao. But only selling <Weiwei> magazines and gifts, the sales had not been very good. The link in Jiang Yu's Weibo is the homepage address of the Taobao store. No one asked her to do this, but Jiang Yu still posted the address easily. This could be regarded as a favor to Zeng Yanan.
This was Jiang Yu's style. She was also like this in her previous life. She was generous. As long as others needed help and she could, she would be happy to. But at the same time she had her own principles, which was why she could become such a good fame in the entertainment circle.
Jiang Yu's Weibo had just been posted, but a bunch of people already leave comments below:
——Out of bath makeup? Isn't this a gimmick again? The makeup in these magazines is rarely normal.
——Jiang Yu, is this the makeup you invented? Does it look good? I just went to the newsstand at the gate of the community and they said that the magazine was sold out.
Jiang Yu smiled back: "I invented it. It's sold out? It shouldn’t be so easy to sell, right?
——You are in a magazine? You are getting higher and higher! When will you be on TV?
——Dada, I bought this issue of <Weiwei>, the cover Dada took is so beautiful. I recommend everyone to buy it, it's definitely a collection level!
Jiang Yu: "Thank you."
——What the upstairs said is true? Is it beautiful?
——I bought it too. If you didn't start early, you would definitely not be able to get it. I suggest you buy it as soon as you can, or you will definitely not be able to buy it!
Jiang Yu replied a few messages, and then she picked up her book and went to class.
…

By the third year, the courses were not tense. In addition, the teachers were all old faces. In the first two years, what should be learned was already learned. The students had become old fried dough sticks. Therefore, the professor was not embarrassing everyone, as long as the performance not went too far, the class could go on.
Today’s class was about drawing clothes in CAD, and the main learning was computer drawing. Originally, this course should be taught in the computer room. Who knew what went wrong, the computer room couldn’t be arranged. So everyone went to the regular class with whiteboard.
Ever since, Jiang Yu had to carry her stupid and old laptop when she went to the classroom, it was like lifting weights.
"Jiang Yu, you should buy a new laptop. Your laptop stuck a lot and is slow, which is a waste of time."
Jiang Yu glanced at Bei Xiaoxiao and sighed: "Do you think I don't want to buy it? This broken laptop got stuck last night, so the renderings I made were gone before I had time to save them. I was so angry that I felt I was having a heart attack."
"Save it first, then you can still have your heart attack!" Bei Xiaoxiao was amused by Jiang Yu. "Then quickly buy a new one."
"There is no time. Wait for this weekend to go."
"You can try online shopping."
"Ah that's right." Although Jiang Yu liked shopping online, she rarely bought electronic products online. "I'll take a look tonight."
In class, Jiang Yu finished the drawing homework assigned by Mr. Zhou early, and secretly took out her mobile phone to open JD*. Because she needed the laptop to make drawings, she still chose Apple brand she was used to in her previous life. As far as designers were concerned, a slight color difference was fatal. (TN: JD.com is one of online shopping platform available in many countries.)
Jiang Yu first bought an imac and sent it to the apartment, and then she bought Macbook Air. Originally, Jiang Yu considered Pro, but after thinking about it, Air was lighter and more convenient for her to use at school. She also bought a new Apple mobile phone. After all done, she input the dormitory address and quickly completed payment.
JD delivery was fast. In the afternoon, Jiang Yu received the goods. When she went downstairs to sign for the delivery, Yao Yiyi and a few girls who were sleeping in came over and saw that Jiang Yu had bought an Apple laptop. Yao Yiyi looked from a distance with gloomy eyes.
"Yiyi, do you think that @Stylist Jiang Yu is really Jiang Yu herself?" Wu Jiatian, one of Yao Yiyi's friend asked.
Yao Yiyi snorted coldly, and said with displeasure: "Who knows."
"To be honest, I didn't even dare to recognize it at the beginning. If it hadn’t had a post about Jiang Yu teaching makeup and a photo of her, I would not dare to associate that Weibo blogger with Jiang Yu. Yiyi, why did Jiang Yu change so much in one summer vacation?" Wu Jiatian asked.
"Does this need to be asked? It must be plastic surgery."
"Plastic surgery?" Wu Jiatian thought for a while and couldn't believe it, "Is it possible? Everyone knows that Jiang Yu's family is not rich, and she also applied for a bursary last semester. Where did she get the money for plastic surgery?"
Yao Yiyi heard this and said, "Jiatian, you don’t know that a girl like Jiang Yu can hardly resist the temptation for money. She is not like us. She is from the countryside coming to the city, it’s not surprising that she is bad."
Wu Jiatian recollected for a moment. She couldn't believe it and said, "You mean, Jiang Yu has broken her studies? Where did you get the news?"
"Does this need to be asked?" Yao Yiyi looked at Jiang Yu's dress, a trace of jealousy flashed in her eyes, "You can tell by looking at Jiang Yu's dress."
Upon hearing this, Wu Jiatian looked up and looked at Jiang Yu that was receiving the express delivery. Jiang Yu had her shoulder-length hair tied up high today. Her hair was not hard or soft. It was tied into a ball. It was a top bun, but not like an ordinary bun. An ordinary top bun was too neat and a bit dull, but Jiang Yu's hair was tied up casually and fine bangs were drooping on her face, giving it a lazy and casual beauty. 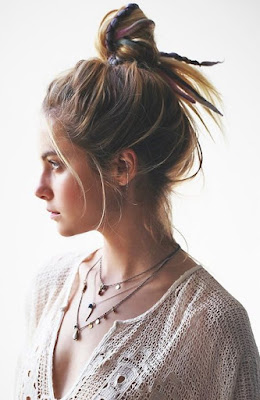 Wu Jiatian was taken aback. Jiang Yu at this moment was really beautiful. She didn't know when, this unremarkable girl who had been classmates with her for two years, looked like she was having a metamorphosis from the inside.
"Wu Jiatian, look at her dress." Yao Yiyi said coldly, "Her clothes seem to be casual, but they are well designed. The trousers look like they are from big names. We all learn fashion design, can’t you see that this kind of clothes is very expensive at first glance? How could Jiang Yu suddenly have so much money? Besides, she actually bought an Apple laptop. In my experience, she was either raised by a man or she went somewhere to be a peripheral girl."
"What you said makes sense. I was thinking how Jiang Yu could suddenly become so beautiful..." After hearing this, Wu Jiatian felt a lot more comfortable in her heart.
…