<Weiwei> magazine was the most well-known beauty and clothing magazine in China. This magazine was jointly organized by two major publishing houses of China and Japan. It adopted the production and sales model of Japanese magazines and cooperated with Chinese publishing houses to promote this magazine to the whole country. Because of this, the magazine had many popular Japanese models styling recommendations, the latest and most fashionable Japanese makeup, and all kinds of tips to help people cover their shortcomings. 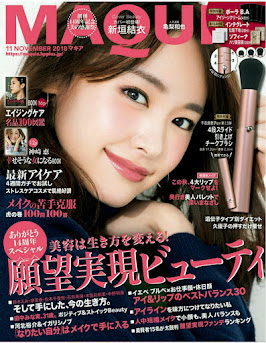 For example, what to wear to avoid thick legs or short legs, how to use foundation to cover blemishes or bad skin conditions, and first aid on skin problems. It could be said that <Weiwei> magazine was the first place for all girls in China to learn how to do make up. Most girls had read this magazine in middle and high school. When everyone's dressing style was undetermined, they all regarded this magazine as referral. And to comply with it showed the magazine's status in the minds of Chinese girls.
However, the customer group of the magazine was relatively young in age. Most of its readers were women under the age of 30, which was student age group. Therefore, the cover girl of <Weiwei> had always been young girls.
Today, the editor-in-chief of <Weiwei>, Zeng Yanan was worrying about the cover girl for the magazine’s next issue. There was no other reason. The main reason was that she was not satisfied with the candidates proposed by the editors. Their appointment with several popular models seems to be very unlucky. One was hit by a car, one had food poisoning, and another was urgently called abroad for project. It was too much of a coincidence!
There were only a few popular models in the circle that had good body proportions and even fewer with foreign style. Besides, since the magazine was founded, different cover girls were introduced every week, and therefore, all models in China had been in it multiple times already. Zeng Yanan needed some fresh blood.
On this day, Zeng Yanan was searching for information about some models on Weibo. She didn’t pay attention to the hot search Weibo, but then she suddenly saw a skin care post. The girl in the post shared her review of Su:m 37 bubble facial mask and Taiyou Hyaluronic Acid. The girl shared some practical tips about hyaluronic acid, teaching everyone the correct way of applying it so that everyone could get twice the result with half the effort while using the product.
What's even better was that the girl in the post was very beautifully. Her eyes were narrow and deep. Her dark eyes had a hint of forbearing stubbornness, plus a tall nose and bright red lips, everything made her have a kind of temperament that was very vague. This kind of temperament was very special, she had only seen it in some European and American models. Those European and American models had become popular in the world without exception, but she had never seen this kind of special temperament on Asian models.
Zeng Yanan suddenly became excited. She felt her blood burn. The Weibo she was watching was a skincare marketing Weibo, so it was a reposted post. There was no information about the girl in the picture, so she reposted the Weibo again and asked:
[Hurry! Urgently ask for the model's contact information, almighty Weibo, who knows please tell me! I like her temperament so much!]
Soon, someone left a comment on her Weibo.
——Sister Yanan, this is a girl who has recently become popular, named Jiang Yu.
——Isn’t this the stylist that I praised?
——She seems to be called Jiang Yu. She is very popular recently. Maybe a new Internet celebrity? She also opened Taobao.
Jiang Yu? What a strange name.
Zeng Yanan hurriedly copied the name and searched on Weibo. Soon, a lot of related news popped up, and an account named @Stylist Jiang Yu appeared at the top. Zeng Yanan hurriedly clicked in, and saw on Jiang Yu’s account there was a post sharing makeup review.
Zeng Yanan’s eyes lit up. She wished to fly right in front of Jiang Yu. She saw Jiang Yu’s post where she shared her makeup experience. In fact, Zeng Yanan had seen many people teach makeup. Also, live broadcasts were popular and Internet celebrities were in the lead. Anyone could buy a bunch of fake brand-name products from Taobao to share. The make up techniques were seldom well-done. They were mostly just done half-heartedly. But Zeng Yanan could tell from the pictures of Jiang Yu that her technique was very professional. It was just like a real professional makeup artist.
What surprised Zeng Yanan even more was that Jiang Yu's made up face was even more beautiful. When she was reviewing the facial mask, her bare face was also already very beautiful. That was to say, her face was very suitable to be the cover girl and inside page girl of <Weiwei>.

Zeng Yanan was so happy. As the editor-in-chief, she dug out many models in the industry. She had also made some models popular. She even transformed some models to become stars. However, when these models had entered the entertainment industry, which was a rare good opportunity, they would fly away without looking back. Although this behavior was understandable, it hurt her heart, so that she had not cultivated new people for many years. But the Jiang Yu in front of her gave her the urge to use all the resources in her hand to make her popular! She was so awesome!
Zeng Yanan looked through Jiang Yu's clothes matching pictures and entered Jiang Yu's Taobao. Although all the items in the store had been taken off the shelves, the pictures were still there and could still be seen.
Zeng Yanan looked at the clothes one by one. As a professional editor-in-chief, she certainly knew how unprofessional Jiang Yu’s pictures were. She could even see that most of the pictures hadn’t gone through Photoshop. Therefore, she was even more amazed by Jiang Yu’s lens catching ability. Not to mention other little girls, even her, an editor-in-chief of a magazine that had been in the industry for more than 20 years, when seeing Jiang Yu's clothes, she also had the urge to buy a few pieces.
Zeng Yanan couldn't control herself anymore. She directly sent a private message to Jiang Yu: Ms Jiang Yu, hello, I am Zeng Yanan, the editor-in-chief of <Weiwei> magazine. I would like to invite you to be the model of our magazine. Can I invite you to meet?
Although Jiang Yu was beautiful, Zeng Yanan still wanted to meet her in person to see how the other person really was. This was a manifestation of her responsibility toward the magazine.
Zeng Yanan's Weibo was verified, so she thought Jiang Yu should reply to herself soon. Unexpectedly, she waited for a long time, but Jiang Yu did not say anything. She stayed in front of her computer until evening, but Jiang Yu still didn't reply. She was indescribably disappointed.
…
At this time, Jiang Yu was busy designing and making samples from cardboard. After making them, she had to take pictures of the production process, and then put on the clothes. She had to take pictures, edited them simply, and then compile a Weibo post with the photos for everyone to see.
The styles were all autumn clothes, many of which were windbreakers and jackets. Because Jiang Yu’s design was more complicated and many parts needed to be done manually, it would definitely take a while to ship. Therefore, she had to release the pictures as soon as possible for everyone to choose, and only then she could go to the factory to produce the clothes based on the responses.
When Jiang Yu finally got everything done, she opened Weibo to publish the style, but suddenly saw a special message.
Because many Gu Shenliu's fans sent private messages asking about the situation, Jiang Yu hadn't opened Weibo recently. She opened the private message by the way today and saw that there was a private message from a verified account.
Jiang Yu didn’t open the message yet. She clicked on the other's Weibo and saw that the other party was verified as <Weiwei> magazine editor-in-chief Zeng Yanan, quite well-known in China.
Zeng Yanan? <Weiwei>?
Jiang Yu searched for a while and found out that <Weiwei> was the kind of magazine that students read to learn clothes and makeup. Although this kind of magazine was not as good as other fashion magazines, it had a lot of fans and it was not easy to get.
Why did this person send her a private message? Jiang Yu clicked to open the private message. The other party first sent a lot of words to her, expressing her wish to meet, but when she saw that Jiang Yu didn't reply, she kept asking her if she was there. If it was an ordinary 20-year-old girl being approached by an editor-in-chief, she should be ecstatic. It's a pity that Jiang Yu could be considered a person who has seen the world, so she replied neither humbly nor with arrogance: "Hello."

Because Jiang Yu hadn't replied for a long time, Zeng Yanan waited the whole afternoon. At around 9 o'clock in the evening, she was about to turn off her computer, but suddenly realized that there was a reply to her private message.
Zeng Yanan hurriedly clicked on it. She excitedly typed a series of replies. After thinking about it, she pressed the delete button and deleted the words one by one. She was a well-known editor-in-chief in China. She could determine the future of many models. Other people were always the one that beg her, where could they see her begging for a model instead? So she couldn’t be too enthusiastic, otherwise she would only downgrade herself and frighten the other party.
Therefore, Zeng Yanan said indifferently: "Are you interested in becoming our <Weiwei> contract model? If you have time, can we meet?" The reason why she asked two questions in a row was because she was sure that the other party would agree.
After all, <Weiwei>, except for some celebrities, how many domestic models were qualified to pick and choose? So, Zeng Yanan waited for the other party to agree with a smile and made an appointment to meet.
Unexpectedly, after 1 minute, Jiang Yu replied: "Sorry, I'm not free."
Zeng Yanan suffered 10,000,000,000,000 points of damage!
Jiang Yu was really out of time! She was also a leader. In her previous life, her clothing company often interviewed models. Every time she held a clothing show, she also needed to find a model. So she knew what the other party said about meeting. It's just for an interview.
Interview? Where would Jiang Yu have time for that! Recently, she had been so dizzy about the new batch of designs, not to mention that there was more important thing to do after the new designs – stocking up for Double Eleven!
For people who made clothing, the busiest time was in the second half of the year. Generally, the stocking started from the first half of the year. At that time Jiang Yu had just been reborn so she missed it. This time she had to take the opportunity to catch up. Otherwise, Taobao’s once a year double eleven festival, what would she sell to her customers? So, she really had no time!
Jiang Yu also didn’t have time to take into account Zeng Yanan's psychological shadow. She quickly edited Weibo, posted all the clothes she designed, and clicked the post button.