When making suits, Jiang Yu always liked to use Scabal fabrics. Scabal was a veteran British fabric brand, known as ‘the best fabric that money can buy’. Their fabric looked especially luster.
In fact, men’s wear had much less variability than women’s wear, especially in the suit category. Even if it pursued change, it would still be tied to a framework. This framework was traditionally thought of as a gentleman's dress. Even though modern people often pursue simplicity and for casual things they tried to blend styles, which were once regarded as the mainstream, but there were many things that could only be pursued but wouldn’t show taste.
The small variability of suits made the importance of fabrics and handwork more obvious. Jiang Yu knew this well, so she chose Scabal fabrics with great care. Given her status in the previous life, it was natural and simple to use Scabal fabrics, but now she was not well-known and had no company. Of course, she had cooperated with fabric distributors before, so she went to the fabric market to meet the same importer who imported the fabric for her pink-purple coat.
Seeing Jiang Yu, the owner in the store was taken aback for a moment, and then he showed his face: "What do you want to buy?"
Jiang Yu smiled and glanced around. Most of the fabrics on the store were for women's clothing. It was no wonder because women's clothing was Taobao's largest category and had a huge market. If fabric seller wanted to make money in a place like Shanghai, they had to rely on women's clothing fabrics.
"I want to buy suit fabric."
"Suit?" Boss Han glanced at Jiang Yu up and down. He had heard that Jiang Yu was an Internet celebrity and had a Taobao store. He heard that it was selling well, but how could it be related to men's clothing? "What brand do you want?"
"Scabal." Jiang Yu showed him the photo of the fabric she wanted, which she found from Scabal’s official website.
"Scabal?" Scabal counted as high-end fabrics. In China, a suit fabric that knew was usually Zegna's, so it was surprising to hear Scabal. "What do you want this fabric for?" 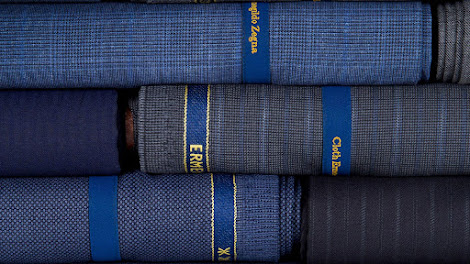 Zegna Fabrics
Scabal was generally only used in clothing customization.
Jiang Yu knew that for retail seller like her, she should have no time to think about expensive fabrics. She knew that the boss would spread the issue, so she deliberately said: "That's it. The dress I designed last time allowed Su Mang to walk on the red carpet at the International Film Festival. In addition, the literary film won a foreign language award. Therefore, there are many people who come to me to design clothes recently that I even opened my own studio. Now there is a customer who wants to customize a suit, and the other party is a person of identity. Of course, I have to choose the best fabrics for high-end clothes."
When Boss Han heard this, he suddenly remembered that the woman named Su Mang was indeed very popular a few days ago, and there were reports about her everywhere. Could it be that Su Mang’s clothes were really made by the little girl in front of him? If this was the case, then this little girl was really amazing!
If the girl already had such a network, there would always be opportunities for cooperation in the future. Boss Han was naturally unwilling to offend Jiang Yu, so he smiled: "To tell you the truth, we mostly do women's clothing here so we don't have that kind of fabric. Also, it's a bit difficult to get it."
Jiang Yu smiled without saying a word, waiting for the other party to speak.
Boss Han paused, and then said with a smile: "But since Miss Jiang has spoken, I can look for it. Although it costs more, it's not entirely impossible."
Jiang Yu knew that Scabal was actually not that hard to get and the boss was just making it sound higher to her. She smiled and said, "Thank you Boss Han, I don't know when there will be results?"
"Are you in a hurry?"
"Better if I get it today."
Boss Han made a few phone calls. After a while, he smiled and said, "A friend who specializes in supplying custom men's clothing stores in China has the fabrics you want. I will ask someone to get them now."
"Then I will trouble Boss Han."
…

Jiang Yu waited for nearly 2 hours before finally receiving the fabric.
Good fabrics were different. Jiang Yu touched the thin suit fabric under her hands and could imagine Gu Shenliu wearing the suit made with it.
Jiang Yu paid the money, exchanged phone number with Boss Han, and quickly returned to her place. The fabric was very good and it made her couldn't wait to start making the suit right away. She washed her hands, took out her chalk, and began to draw lines on the cloth.
Gu Shenliu’s suit posed a big challenge to Jiang Yu. Most people wear clothes to complement their body, but Gu Shenliu’s aura was strong, so ordinary clothes on his body would become a foil, and it could even appear unsuitable. Because of this, she was particularly concerned.
Although making men’s suit was not as time-consuming to as high-end ladies’ big dresses, it required a lot of care and attention. Many details should be followed in the workmanship. For example, Jiang Yu made a dark gray dark-striped suit for Gu Shenliu, so in the production process, just matching the stripes was a headache already. There were many parts that needed to be matched, including the pocket flap and lapels on the suit. It was very laborious to align the upper and lower stripes.
Another example, buttonholes needed to be sewn by hand, and it took time. Not to mention making the lining on the armpits and the production of the lapels. Jiang Yu didn’t dare to slacken at all. It wouldn’t be an exaggeration to say that even if she would make wedding suit for her future husband in the future, the effort she gave still wouldn’t be as meticulous as this time.
Jiang Yu did this until the early hours of the morning before the suit finally had a rough shape. Next, she needed to show it to Gu Shenliu for the first fitting.