"It's hot, and you can bite into the soft egg and crispy crust in one bite. If it is coated with barbecue sauce, it will be so fragrant that it makes your soul tremble. Nibbling the grilled noodles while visiting the night market, the whole roads would be scented. The wind blowing would be filled with the aroma of barbecue. Pity, they are all extinct now."
Hiss——
There were a lot of drooling sounds in the laboratory. The scientists looked at Liu Weiwei one by one, intently.
"Is there such a night market?" Li Sanpang pouted and stared, "I haven't heard of it anywhere."
Liu Weiwei shrugged. Yes, but there were no more now. "Team Leader Li, they are extinct. I have seen night food street of the History Museum. It seems that there are many such snack streets in ancient China where people can eat and shop..." 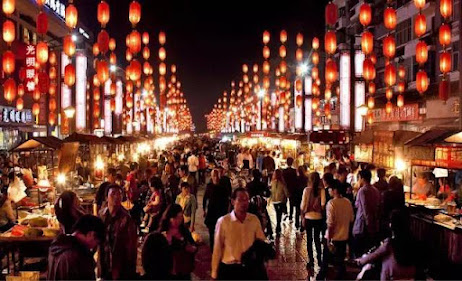 "Don't say it!" Li Sanpang took a painful step back while clutching his chest, "Why was I not born then? Why now. It hurts, even my breathing hurts!"
Liu Weiwei's mouth twitched.
"Wait, can't we reproduce such a snack street?" Li Sanpang stepped back two steps and then stepped forward, knocking his hands together, "Yes, how come I didn't think of this? We should reproduce the snack street!"
Liu Weiwei was also shocked. She also had never thought of such a thing from the past. However, when Li Sanpang brought it up, she felt a little enthusiastic. She couldn't help but brighten her eyes, thinking of the banquet that the Marshal wanted to do before. At that time she couldn’t do much because of her health. But now, shouldn’t it be possible to start a snack street activity in the military area?
"Is there any holiday next? When everyone is on vacation, we can do it in the barracks. We will select the top ten most popular dishes to be served on the street." Liu Weiwei thought of eating while shopping, and she felt itchy. Even when they were busy or tired, women still like to go shopping. And she especially liked to go to the snack street. If she couldn’t go out of the barracks to do big things, then she would do it inside. It just so happen that the children in the training camp were here and could participate together. This activity would leave a deep mark on their teenage memories.
"You can!" Li Sanpang was shaking with excitement, but soon he frowned. "But there are not enough chefs? Also, there are only a dozen cafeteria robots, right? That's not enough!" How could only a dozen stalls count as a snack street? His foodie mind strongly expressed dissatisfaction.
The scientists frowned and fell into the same deep thought. But about the robots, this problem was easy to handle.
"It's okay. The robot in my bedroom can be rebuilt to copy the memory chip of the cafeteria robot and learn its cooking skills."
"There are still more than 20 robots piled up in my personal space. They are my invention since elementary school. Now it's time for them to appear!"
"Hehe, when it comes to robotics research, none of you can beat me. I won an award last year. It's not a problem to build a hundred flexible robots."
Liu Weiwei couldn't help but patted her forehead, "Then next time I will just lend you the cafeteria robot, I won't come over." She was as busy as a dog before, why didn't she know that there was such a thing like copying the memory chip?
"No!" Scientists unanimously objected strongly, "Your food is special!"
"What?"
"In short, the experiment must be done with your food!"
Liu Weiwei silently mourned, "Then when you are just greedy and want to eat in the future, you can let the robot do it. It's still better than nutrient solutions."

"Ah..." The scientists were all dumbfounded. Yeah, why didn't they think of it before?
"I've become so stupid. Have I been working too much overtime?"
"My God, I knew that staying up late would lower my IQ, but I still stayed up for so many days. Such a simple thing, I didn't even think of it!"
"My robot is here. Clerk Liu, when can the cafeteria robot come over? If not, I can just go there myself."
Everyone started to dig out robot from their space one after another. Unlike ordinary people, many scientists could make a robot immediately with bare hands. There was no idea how much inventory there was in their personal space.
The robots that came out had all kinds of strange shapes. Dog-like, cat-like, big tiger, airplane, truck, Transformers, and even Batman-like... The most speechless thing was that Liu Weiwei also saw a robot that looked like Marshal Li Er.
"Mine." Li Sanpang held his chest proudly, "Realistic, right? He is five years old this year, and his name is Xiaosi*." (TN: Literally means Little Four.)
"Puff..."
The scientists all spouted a mouthful of hot tea.
Liu Weiwei looked at Li Sanpang that had bold eyes. She didn't know if others knew, but Qin Mo told her about their relationship. Li Xiaosi... She really didn't know what Marshal Li Er would think when he saw this.
As a result, a good appraisal meeting for the new army rations became a bit cracked.
However, in the end Liu Weiwei still promised, "Wait until the snack street is set up, I will let you taste the authentic grilled cold noodles~"
The scientists were gearing up. When the cafeteria robots arrived in the afternoon, they shifted their goals.
Cafeteria robots changed from the obsolete parts of fighter aircraft, into hot spots overnight.
…
The news of Snack Street soon spread from the Scientific Research Bureau to the Military Clinic. The angels in white spread the gossip to the soldiers who came for treatment. After the soldiers returned to their team, they passed it to their roommates and teammates. Almost overnight, the whole army learned about the snack street event.
"Da Bing*, we can have a big meal soon, are you happy or not?" He Junliang bathed the glacier wolf, humming and blowing the fur even more vigorously. (TN: Literally means Big Ice.)
The Glacier Wolf opened its clear blue eyes. There was obviously some contempt in it. It rolled over comfortably, revealing its soft belly, and closed its eyes. Uneducated humans! It ate chicken fillets and roasted whole lamb every day. It was beautifully full and ate big meal every day. There was nothing to be excited about.
At night, He Junliang imagined the big chicken legs in the cafeteria. He was about to drool and lose sleep. Seeing this, the glacier wolf stretched out its right paw, reached for its food bowl, turned its handsome wolf face, and pushed the bowl in front of He Junliang’s mouth. Inside the bowl, there was a leftover half of lamb leg. It was still full of fragrance and dripping with golden fat.
The glacier wolf patted He Junliang's leg with one paw: Eat, poor human.
He Junliang: ...
In many other dormitory rooms, the same things also happen, but some had completely different endings.
"Hoho, Da Hui, you will have Xiao Long Bao again, are you happy? At that time, can you give me one?" Lu Qingheng was squatting on the ground, communicating with his tall beast pet. However, in response to him, Da Hui directly swiped a left fist!
"Oh! D*mn!"
…

The news of the snack street spread too quickly, far beyond Liu Weiwei's imagination, and finally even Marshal Li Er personally came to her door at night.
"Xiao Liu, I heard that you are going to run a hundred stalls alone?"
"... Huh?" Liu Weiwei was completely confused.
"Everyone said this. From the entrance of the base all the way to the training ground, if it was a stall about a meter wide, oh no, it would take a thousand stalls to be full."
"No, this is not true, I haven't reported yet, I haven't..."
"No problem! Next month is the anniversary of the founding of the Interstellar Alliance. I am looking forward to this event. Qin Mo, you have to be nice to daughter-in-law. You can't do less massage at night."
"No worries, Teacher. I’ll do it every day."
Liu Weiwei: "!"
This gossip was so legendary that it was directly approved. Liu Weiwei once again challenged an impossible task.
…
The next day, the youth team in training received a new task.
"Snack Street Stalls: You will cooperate with robots to manage the production and sale of food at a stall. All income from the sale will be exchanged for equivalent points."
"Requirement: Closed study of food making for three consecutive days, and work in the snack street on D-day."
"Those who are willing, come to me to sign up."
The instructor of each class conveyed Liu Weiwei's request for the children to assist in the task. They saw the children quickly made eye contact from left to right, but no one came forward for a long time.
Participants would be rewarded with points, but then they couldn’t participate in the actual snack street event. What's the point of having points when they wouldn’t be able to enjoy food?
Many children were very savvy. They were now cooperating between two dormitories and could eat all menus in the cafeteria every day. Although the amount was small, they at least taste the deliciousness. But if they went to work, it sounded like they wouldn’t be able to earn points during the three days of training, so this mean they couldn't redeem food. When the snack street event was held, they also had to work and couldn’t eat any food. Counting everything, four full days would be lost!
The points couldn't be taken out of the barracks and couldn't be exchanged into credit, so they were totally worthless outside training.
Everyone bowed their heads, and the faces of the instructors became heavier and heavier.
But soon someone came forward.
The four girls who had been singled out from the beginning shouted, gritted their teeth, and stood up.
Just when everyone was still stunned, there was another voice. "Report, I will join! The robot said at the beginning, labor is glorious and parasites are shameful, so choosing to participate in work must be the best choice."
Everyone who had bowed their heads all raised their heads in shock.
Even Liu Weiwei, who received the latest news from the instructor, was surprised. She couldn't help looking at Xu Hui who had come to the cafeteria to help. "This kid, did he deliberately... go against me? He can find the right choice every time? Or... he's actually not that bad?"
Xu Hui frowned, "Let him come. If he disobeyed, just spank!"
Liu Weiwei pressed her brow. She glanced at the task in progress again. If it wasn't clearly stated that she hadn't completed it, she would have thought that the bear child had become better.
D*mn, that little kid was so good at cover up?
"When they come tomorrow, they will be divided into six groups according to the number of people. They are cabbage pork dumplings, vegetable meat dumplings, crystal shrimp dumplings, crab roe siu mai, golden quicksand buns, and barbecued pork rolls."
"These dishes are safer and don’t directly involve big fire. Sister Hui, can you please maintain order in a unified way? Ten robots will be responsible for teaching and guiding along with Yang Likun and me."
"Okay~"