Liu Weiwei received a notice in the morning, more specifically it was a task assigned by the Logistics Department. As a cooking soldier in the cafeteria, she was needed to assist an immediate youth training experience activity. The location was in the southeast area of the military base. The number of youth that participate was estimated to be 100. They needed her cooperation to provide meals.
Liu Weiwei's somewhat confused brain instantly woke up.
"Youth military training? Our base will do this?" Liu Weiwei immediately asked Qin Mo who was holding the Little Bun to change his diaper.
Qin Mo squinted, "Have you been notified?" Personal tasks couldn’t be disclosed. Even if he was at home, he couldn’t tell Liu Weiwei the tasks that he would perform or were performing. His wife was so soft hearted. He didn't know if she trusted him or was just unorganized and undisciplined. He pressed his temples, he felt that it was most likely the latter.
Qin Mo lowered his head, rubbed his palm against Liu Weiwei’s delicate neck, and pressed her directly into his arms.
Liu Weiwei's mouth was immediately blocked, "Um..."
"When you receive a task, first look at the level of confidentiality and then consider whether you can say it." Qin Mo knew that people’s gossip ability was innate, and the desire to gossip was uncontrollable. However, he still had to educate his wife. Leaving a mouthful shouldn’t deepen her depression or break the rules.
Liu Weiwei was short of breath as she was kissed dizzily. When the smell of poop came to her nose, only then she broke away from Qin Mo and pushed him away. "Don't make trouble! I'm making breakfast, why did you come in with a used diaper?" She hadn't realized until now, but the attack power of the Little Bun's mine was too great. When she had the time, she needed to ask the doctor how could it be so smelly and if the bun had eaten something that shouldn't be eaten.
Liu Weiwei instantly fell into a mother’s worried thinking.
"Hey, Meat Bun, your mother dislikes you and thinks you are stinky. She wants to drive us out. Mother is so cruel so father can only hand you over to the robot."
Liu Weiwei: … "Can you talk better?"
"Then listen to me."
"Ah, task..." Liu Weiwei glanced at her light brain with a strange expression. "I thought it would be okay to say something like this. After all, the training camp is held in this military base. Wouldn’t everyone also know by then?"
Qin Mo handed the Bun to the robot and took a picture of his little ass, "No one knows now so that's a secret mission. Unless the entire military camp is made public, you can't say it to Xu Hui, me, or anyone for the time being unless we also have the right to know."
Liu Weiwei was embarrassed and immediately realized her mistake.
Qin Mo kissed Liu Weiwei, "You are very beautiful today."
Liu Weiwei blushed instantly. She applied a mask last night. The straight steel man would praise her too.
"Good haircut, more lovely."
Liu Weiwei was taken aback. She reached out and touched the messy bird nest she had produced while working in the kitchen, "..." Straight was straight, nothing had changed. He only learned to change the subject, huh!
…

On the other hand, when Saibandes received the breakfast from the cafeteria robot again in the morning, he couldn't help but smile. "That lovely female chef didn't come to see me in person? When she got an answer, she abandoned me."
The robot stood motionless and said, "If you are talking about Clerk Liu, she is married and already has a child, please keep a safe distance. Otherwise, your whole bones will be crushed by someone."
The corners of Saibandes' mouth twitched. He instantly remembered that in the ward next door, he seemed to see a tall figure leaning against the window one day. He also recalled the smell of danger that day.
"Well, it's breakfast time, let us forget irrelevant things." Saibandes calmly and gracefully lifted up the sleeves of his hospital gown. He was about to roll up his big back when his expression suddenly changed. It was full of expectation. He looked at the lunch box placed on the small table, moved his nose to sniff the air vigorously, and showed an exaggerated expression of contentment and intoxication.
"Oh~ Can you play some music for me oh unknown robot?"
The display screen of the cafeteria robot that went dark lit up again. "What do you want to listen to? <We are all sought-after>, <The People's Sun>, <The Soldier>, or the modern version of <This Planet is Our Mother>, <Warcraft, Surrender!>, <Open the Mech>, <It's not a man if has never been a soldier>..."
Saibandes looked sluggish instantly, "Be more elegant, don't be so rude, okay? Meal time, the rhythm should be light and brisk in order to increase appetite."
"The music library search is complete, nothing meets the requirement."
"... I just can't communicate with you well. Okay, I'll just eat." Saibandes looked away reluctantly. But after he opened the lid of the lunch box, his expression changed, "Oh, this elegant breakfast, it is simply a moving piece of music by itself."
"Oh my God, isn't this just an opened sheet music? One morning, let me wander in the beautiful music notation, this beautiful and charming funny female chef is really cute. She had fascinated me..."
Robot: !?
Saibandes lowered his head. He saw inside the lunch box there was a soup that was clear and reddish. It was shining brightly, in the soup there were faintly lying beautiful pure gem-like white lines, and the top was covered with layers of green and golden gems. It's like a stave, stringed up with floating musical notes, playing an exciting symphony in a bowl.
"What is this called? This should be noodles. Oh, look at its color. It is so white and charming. It looks more beautiful than pasta. I want to use it as a work of art and keep it in the cupboard forever."
"Oh...what is this beautiful green mini gem? It is so clear, in this clear noodle soup, it exudes a unique light, but it seems to reflect the color of the noodle soup, what a masterpiece full of fun what. It doesn't look like a commoner's food at all. The appearance is heart-pounding."
The robot had a black screen again, but it was a face-to-face answer this time. "Shredded pork noodles with pickled vegetables." 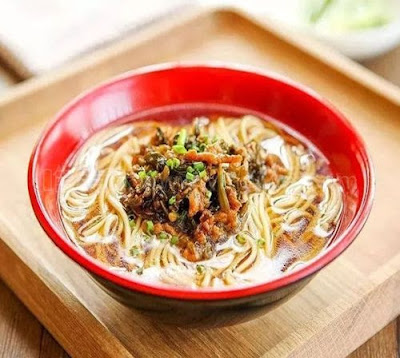 "Pickled vegetables?" Saibandes heard this word for the first time, "Is it a dish like snowflakes? Oh~ the name is poetic, is it a word that a troubadour can come up with? I have only seen such similar words in the antique poems and music I downloaded." (TN: Pickled Vegetable/雪菜/Xuě cài = 雪/Xuě also means snow.)
The robot didn't want to talk to Saibandes anymore.
Fortunately, Saibandes also knew that enough was enough. Although the excitement of seeing new food dominated his brain, he soon regained control. He quickly picked up the chopsticks, and without hesitation picked up a chopsticks full of noodles. The noodles were long and thin, like a waterfall flying down. There were yellow-green pickles in the middle plus small and tender shredded pork. Looking from a distance, it really had a matching beauty. He admired it for a while, then turned on his light brain camera and started taking pictures.
After taking a few shots in a row, Saibandes stopped. He put the noodles in his mouth. "Well…" He let out a slight sigh, but quickly hissed and put the noodles of the chopsticks into his mouth very cruelly. The salty aroma of pickled vegetables, the deliciousness of shredded pork, and the pure and steady scent of noodles, he sucked it to the end. He also splashed out some hot noodle soup. When his mouth was full, it was like eating different jumping notes and elegant staff, as if lively music sounded in his mouth.
[Today's Civilian Cuisine: A bowl of noodles that make notes beat in the mouth.]
[Picture]
Saibandes started with one bite and wanted to eat again, but the noodles were a bit too hot still. So he took some time to enthusiastically push a log update on his personal web page. When he was about to continue eating, the door of his ward was pushed open.
Long legs on a tight army pants stepped in directly and then stood straight. The person had the same blond hair and blue eyes as Saibandes.
"Good morning, my dear brother who doesn't want to live."
Saibandes: "... Can were talk after my meal? Disturbing other people's meals is not something a gentleman should do."
"It doesn't matter whether it's a gentleman." Mu Ming faintly pulled out a stool and sat down. He glanced at the small table and the noodles, "This clinic is pretty pleasant for you?"
Saibandes didn’t respond to his brother that was staring at the noodles crazily.
Mu Ming pressed his twitching temples, "If you no longer want to die, you should go, go back to your hometown. What are you doing here, why are you staying?"
Saibandes moved his chopsticks, "…We haven't seen each other for so long."
"This is not where you should be." Mu Ming snorted, "Or, you shouldn’t be eating people's food. Do you find this interesting? You will only cause trouble here, you don’t contribute but have a thick skin."
Saibandes blushed. Indeed, if it was reported in the news that a billionaire like him had been recuperating at a military base for so many days, it would be disgraceful. Eating taxpayers’ food, was this what a rich man should do? He lay here and didn't make any money. He also almost couldn't count the bills he had accumulated up to now. "Then you help me contact Anna, let her pick me out, and take the people from the bank to the nearest hotel."

Mu Ming: "You have been dead for so long, still pestering others?"
"…She has been with me for more than ten years, you want me to change my secretary? No, no way, you have to find her," Saibandes instantly lost his appetite, "If not I will not work anymore."
"Well, I see. But if there is a chance that you can continue to eat the troops' food after you get out." Mu Ming raised his eyebrows, "Are you going to do it?"
"What do you mean? Hire that female chef? She doesn't seem to want to leave."
The corner of Mu Ming's mouth raised, "Recently the military have launched an experience project that allows kids who don't know any suffering to come in and experience being a soldier. I think this project is also very suitable for bored rich people like you."
"…Obviously you are too…"
"In short, you can think about it and then bring your friends to experience life in the army. The location may not be the base, but as long as there are foods from in the cafeteria, it shouldn’t matter where you will be, right?" Mu Ming sorted out his bangs. "This It is also an instruction from the above, so that these rich people wouldn’t also think about dying in the future."
"The organization doesn't want to work hard to save you people one by one and it's better to do the necessary psychological counseling in advance. If we start this project, it will be jointly done by the military department and the human psychology research department."
Saibandes: "You mean I will be a middleman? I can participate in every game and eat delicious food?"
Mu Ming pulled out a smile, "Smart!"
"Deal!"