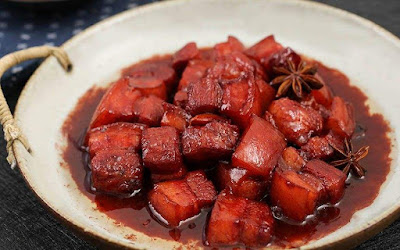 Liu Weiwei had not eaten all over the universe, but she was sure that high-end restaurants in Interstellar era wouldn’t have fermented bean curd, and the rich Saibandes would have never eaten it. His Western ancestry would have leaned to breakfast with bread and butter, or bacon and sausages, or even high-quality steaks. She bet that it was impossible for him to eat porridge, let alone knew how to mix fermented bean curd in.
Although Liu Weiwei didn't know until a long time later, at this moment, she was completely limited by poverty and imagined the life of a billionaire too simply. But it didn’t prevent her from betting right, Saibandes had never eaten fermented bean curd. It was not that he didn’t eat Chinese food, but his secretary Anna and his robot butler Bond, did not allow food below 100,000 credits to appear on his table.
Saibandes could be said to be like a spoiled giant baby. He hadn't eaten it. But once he ate it, it felt like he had gotten a novel toy, and other things were forgotten instantly. "God, what is this? Such a gentle taste, savory and sweet, perfectly combined with rice porridge. I felt the hand of the gods was behind this. It changed the taste of this ordinary bowl of porridge. The square piece, bloomed with such a gorgeous but feminine rose color. It was ruddier than yesterday's trotters, and its skin is smoother like jade."
Saibandes tried to commit suicide by swallowing gold, and the taste was not very good. He even was in a trance for a moment, looking at the ruby-like square snacks, he would rather swallow these to end his life. Why did he swallow gold stupidly? That d*mn thing made his stomach uncomfortable. "Like a goddess, it is beautiful and mysterious, but it has warm hands, it caressed my uncomfortable stomach..."
Saibandes closed his eyes, feeling every part of his body warmed by the rice porridge. He couldn't help showing his enjoyment, but soon his comfortable expression came to an abrupt end. "My mental power... has risen again!?" He suddenly opened his blue eyes and stared at the simple food on the table in an inelegant and ungentlemanly disbelief. The white porridge at noon made him feel extremely weak but real fluctuations, and even his body that had been weak for a long time regained a little anger. And now, he felt that way again!
Saibandes looked at the food on the table, his handsome face became more serious than ever before.
…

Meanwhile, Liu Weiwei was already resting at this time. She was holding the Little Bun, holding an enlightenment literacy picture album, and circled the dots on it.
The Little Bun, who had a tendency to become fat, babbled his thumb into his mouth. He was still drooling, apparently completely ignorant of literacy.
Liu Weiwei wiped the tender mouth of the Little Bun and continued to circle the picture album. If she opened a new store, what would it be called? Also, would the Marshal agree to her opening a shop in reality?
When Liu Weiwei first arrived in the military area, the Marshal talked to her and gave her a high degree of freedom. As long as she did not do anything illegal or disciplinary during her break, she was free to do what she wanted. However, she now gradually realized that the military region was special. Even thousands of years later, the difficulty of getting in and out of military bases had not changed.
Except for special posts, other people were not allowed to enter and leave at will. Even at the rank of Major, they still needed to accept an order or had their leave application approved before they could leave the base.
"Huft." Liu Weiwei sighed faintly. Saibandes intensified her idea of opening a physical shop. If good food could save a person who wanted to die and stimulate their desire to survive, then she would be able to save more people by opening a physical store.
"What's the matter?" Tang Yingqian, who was rubbing the little rabbit beside Liu Weiwei asked curiously when she heard the sigh.
Xu Hui next to Liu Weiwei was playing with Little Bun’s hand.
Tang Yingqian came to ask Liu Weiwei to pick a cute rabbit for her on the Internet, and took Xu Hui as a companion. However, Liu Weiwei had been absent-minded. In the end, the rabbit's post-selection was chosen with the help of Xiao Bai’s paw. It helped clicked the video of available rabbit on the internet.
Liu Weiwei showed a sorry expression. Saibandes related information was within the scope of confidentiality, so she couldn’t say anything. "It's nothing. I just wanted to open a small restaurant when I came back that day after we went out."She concealed the real cause, but it didn't matter much.
When the two army sisters heard this, they all exclaimed.
"Weiwei, really!? That's great, I also want to eat your food every day."
"Wow, although I don't have a lot of deposits, is there anything I can help?" Tang Yingqian didn't even touch Xiao Bai’s soft legs anymore. She instantly looked at Liu Weiwei with some expectation.
Xu Hui was even more excited.
"But I haven't mentioned it to the military. Maybe it will not be approved. It's impossible to leave the military area every day." Liu Weiwei frowned.
"Oh, I thought you were worrying about something, you think too much." The eldest Xu Hui laughed.
"What?"
"I bet that others may not be able to do so, but the military department will definitely approve it if it’s you. Do you know that the military department will do many non-combat projects every year?" Xu Hui shook her head, "You may be too busy to pay attention."
"A lot of military funds and military expenditures come from taxes of ordinary residents, so they need to repay the residents. The military department is also considering more participation in residents’ lives in recent years and has opened many military programs for everyone. By this, they hope more people can sign up and join the army."

"Last time we took you out, there was a small road that we passed by, and they were all discount stores. Did you see it?" Tang Yingqian nodded and joined, "That was all run by soldiers in our military area. What is this project called? Civil?"
Liu Weiwei stared, she didn't notice at all, "That was run by soldiers?"
"Yes, but not for the purpose of profit. We usually sell only at the cost of raw materials. This is called People’s Benefit. The electronic equipment repair shop was run by the scientists of the Scientific Research Bureau. They take turns to work in the shop, and the electrical appliances for sale are also small things made by the scientific research bureau's scientists. Almost everyone contributed one piece of equipment. The beast pet shop was also from beasts captured by the soldiers when they went to the mountains during their mission, and some of them were artificially raised by military veterinarians."
"There are many others, such as the hundred yuan shop, which also contains some bamboo basket crafts. I also participated in weaving at that time." Xu Hui proudly raised her chest, "Our military wife will also help participate in some."
"Weiwei, we thought you knew it, and we never took you to see it last time."
"Yes, I thought the Major would have taken you there long ago."
Liu Weiwei was stunned. Qin Mo said nothing. "Then it doesn't matter if I open a restaurant? As long as it is a cost price and does not make money, the military area will not oppose it and will instead support it?"
"Yeah, there might also be funding. Oh, of course, the cafeteria supply can't be cut off. So many people are counting on eating there."
Tang Yingqian's eyes lit up, "Weiwei, why don't you make a report now? What help do you need? Do you think I can help serve the dishes?" Now there were robots which could completely replace humans in non-technical positions, but her life now was too boring.
Not only her, but even Xu Hui, there was not much that she could help in the army. Many things, they could do will be robbed by robots, for other things, they would not have enough physical strength, or lacking in authority. Their husbands were often not around, and even in the military area, they couldn’t be with them during the day. So their whole person was bored.
Liu Weiwei originally wanted to make An Hao and Zhen Nuli find a way to help in the new shop, and hired a lobby manager. But it seemed that there might be no need for additional recruitment now. She did not expect the military sisters-in-law to be so enthusiastic.
"You write the report. I will show you some examples." Xu Hui was even more active.
In this way, under the guidance of the two military sisters-in-law, Liu Weiwei wrote a very righteous application to provide service for the ordinary people of the Interstellar Alliance. The report explaining the request for opening a restaurant was sent to the organization, and of course she did not forget to send a copy to her Major. She was going to take the Little Bun with her, anyway, there would be housekeepers and nanny robots around.

The speed of the organization was very fast. When Saibandes had lunch the next day, Liu Weiwei received a reply of approval. There was also an address in the reply. It was at the gate of the military region. The closed snack shop was about 100 square meters. It was later classified within the area of the base and transformed into a free beverage service station.
If Liu Weiwei confirmed that she agreed to open a shop, it could be rebuilt after three days. But there were many organizational requirements:
[1. Non-profit stores must not retain their own profits.]
[2. It must comply with the sanitation permit. No vicious incidents such as food poisoning shall occur.]
[3. Hang up the placard belonging to the military area base. Entertain soldiers or veterans, and give priority to them.]
[4. No malicious competition with other stores, and no more than 500 diners a day.]
[5. The function of the free-of-charge beverages shall be retained, and must not refuse citizen's request for assistance.]
[If any of the above is violated, it will be immediately deemed as a project failure and deprived of the right to operate. After three days of trial operation, a detailed report on the operation will be made and 100,000 credits will be temporarily allocated.]
After reading for a long time, Liu Weiwei happily sent a message to Xu Hui and Tang Yingqian, and did not forget to show it to Qin Mo next to her. "You didn't tell me before, that I can still do this."
Qin Mo pinched Liu Weiwei’s waist, "I told you and then let you go with a big belly?"
"I have already…"
"What if you pester me to give birth to a second child again?"
"!!!" Liu Weiwei couldn't fight this man, so she blushed and retreated, but she was still embarrassed on the sofa by Qin Mo.
"I seem to be a bit miserable." Qin Mo’s dark eyes were deep, "I will be left at home by myself in the future."
"No, no."
"Then you prove it."
"How…"
…
Three days later, when Liu Weiwei personally went to the address to observe and guide the decoration, she found a striking big bed on the second floor attic.
Liu Weiwei: "..."