When this strange fragrance spread, almost everyone in the clinic sniffed the air vigorously. Most of them had eaten the Mid-Autumn Festival food not long ago, and now they were suddenly attacked by this similar but stronger smell. All the gluttons in their body were seduced instantly.
Lucky nurse Le Mengyao felt like she had won a lucky prize when she was called by Doctor Bu. Even being ordered to take care of the most bad-tempered patient, she didn't feel the pain but looked forward to it instead. Now that she smelled the fragrance spreading in the air, her stomach groaned. Even if it's not time for lunch break, a picture of delicious lunch flashed in her mind!
"The base is too poor and don’t have money for new ventilation fans?" The handsome blond man lying on the bed who had just broken a needle into eighteen segments had similar facial features to Mu Ming. But it was obvious that his face was paler and his blue eyes were dead gray. He didn't look like the young person that he was.
Le Mengyao pursed her lower lip. She obviously didn't want to take care of a patient who had a bad attitude. "Broken." She said this just like saying that the sun was pretty good today, without even a bit of entanglement.
Saibandes' soft handsome face twitched. "Don't worry about it in vain. Even if you create such a poor food aroma, I won't eat. I want silence, please go out."
Le Mengyao rolled her eyes. In the military clinics, there were many soldiers who died of severe injuries or were severely disabled. These people lived harder life than dying, but they persisted.
"You go out and call your dean in. I will fund 100 million and let him repair the ventilation turbine." Saibandes rolled over anxiously. He had to resist the tangy aroma! But even if he held his breath, the aroma still got into his body from every pore. The d*mn temptation made him want to eat… Of course he wouldn’t be fooled. He pulled the air-shipped private custom duvet directly over his entire head and breathed irritably.
Le Mengyao pouted, "Okay, 100 million." She closed the door, handed the thermometer and syringe to the hands of the medical robot who had been driven out, looked at the clock on the wall, and clapped her hands briskly. There were still five minutes~
Le Mengyao went to the next room to continue the infusion and took the new medical report. It was not until the bell rang at twelve o'clock that she finally swallowed, walked to the end of the corridor, and carefully knocked on the room door that exuded rich fragrance.
"Please come in." A soft voice sounded.

Le Mengyao opened the door and saw Major Qin Mo, who stood leaning against the window and nodded at her when he saw her come in.
Le Mengyao blushed. Major Qin, the national hero, was stalwart and handsome. The most important thing was his strong combat ability and his cold domineering personality. But now, she bowed to him without hesitation and quickly looked at the center of Major Qin's gaze with admiration. She gave a friendly smile to Liu Weiwei.
"Clerk Liu." Le Mengyao respected Liu Weiwei as if she was greeting an army officer. After eating the Mid-Autumn Festival delicacies, the height of the cafeteria chef Clerk Liu was far more advanced than the inedible Major Qin Mo and Major Mu Ming in everyone's minds.
Liu Weiwei beckoned to Le Mengyao, "You can eat first. No need to wait for Doctor Bu." With that, she picked up a big iron tongs on the table. But soon the man leaning on the window stretched out his hand and took the tongs away, "I'll do it."
Liu Weiwei smiled, and simply moved two steps to give Qin Mo the position. It wasn't until he easily took a big bag of soil out of the boiler with the iron tongs, and threw it on the table with a sizzle, that Le Mengyao who was watching came back to her senses and realize she had been served a mouthful of dog food.
Ah, it turns out that Major Qin had such a gentle side! Le Mengyao, the little nurse, shook with excitement. However, it didn't last long before she was stunned. A big bag of soil cracked open in front of her, and the slowly boiling white steam emerged from it made her startled. Dirt, it's really dirt...
Le Mengyao sniffed. She couldn't believe that the source of such a fragrant smell came from the little dirt bag in front of her. Especially after it was cracked, the fragrance inside was even more explosive, blasting out wantonly. Her face quickly spread with the smell, becoming intoxicated. If someone made any request at this time, she was afraid that she would stupidly agree, she had lost any ability to think.
Xiao Hei at Liu Weiwei's feet glanced at the little nurse who exuded an unfamiliar smell. He showed an obvious contempt. But soon, he rushed over, slapped his paws, and smashed the dirt away.
Le Mengyao looked in a trance, but finally grasped the point. "Leaf." She seemed to have not seen the movements of the Mini Krypton Beast at all. Her attention was placed under its claws. Under the claws, the dirt fell, and a large green leaf gradually appeared. 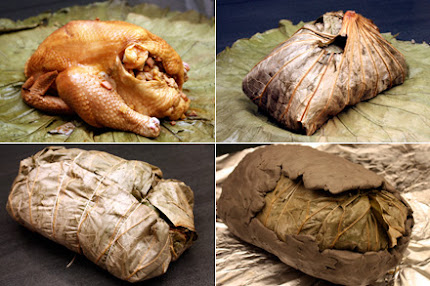 Liu Weiwei followed with a smile. She opened the lotus leaf that was wrapping around the outside layer by layer, revealing the shiny chicken inside. "It’s said that a penniless beggar caught a chicken when he was hungry. But because he had no seasoning to cook it, he roughly wrapped the chicken in leaf, cover it with mud, and put it on bonfire for roasting. But what he didn’t expect was it would be so delicious that people want to swallow their tongues."
Liu Weiwei handed the little nurse a pair of simple plastic gloves. "The chicken meat is soft and tender, so you can just tear it with your hands. Bite large pieces of meat directly from the bones, this is called eating a chicken chicly and boldly."
Le Mengyao swallowed fiercely and couldn't help nodding. Listening to the tempting commentary and smelling the amazing smell of meat, she couldn't bear her hands at all. She thanked Liu Weiwei and put on the gloves directly. Regardless of etiquette and elegance, she tore off a chicken thigh without any hesitation!
Le Mengyao tugged hard, and there was a drunken expression on her face. When she touched the slightly hot chicken with her fingers, she could clearly feel the tender skin of the chicken. The chicken was soft enough that she felt it was melting. The shiny chicken oil seemed to roll down her gloves. The fragrant, golden and bright chicken skin esd attached to the meat, holding the bone, she was able to pull it off without any hindrance at all.
There was a scream in Le Mengyao’s belly, and she blushed. She couldn't wait to bite on the chicken leg. The fat and tender chicken thigh meat was crispy and plump. The original umami instantly wrapped around her teeth. Every strand of chicken was like a rope, wrapping her taste buds tightly! She was now full of fragrance. She wanted stand up and jump!
Le Mengyao could feel the surging of heat in her mouth, and the constant flow of energy rolled down to her stomach, triggering stronger appetite. She swallowed the chicken that made her feel like a fairy, and her eyes drifted to the ground in astonishment. The airtight soil tightly locked the umami essence of chicken inside, and the clamor spread until the moment it was broken open…

When Bu Zhongxin knocked on the door of the room, he saw the little nurse who had no sense of existence at ordinary times eating like a male soldier. She exploded with a majestic force of devouring. She had a fat chicken wing in her left hand and a tender white chicken breast in her right hand. Her mouth was still bulging, but she kept stuffing the chicken in her hands to her mouth…
This surprised Bu Zhongxin. As a medical staff, the nurse should know how to eat properly to protect her gastrointestinal and digestive functions.
This little nurse must have been very hungry, Bu Zhongxin sighed sympathetically. He pulled up his white coat and sat beside her. He took off his watch and pulled up the sleeves of his both hands. "Sister-in-law, ask for meat."
Xiao Hei snorted. His one paw slapped another dirt ball and put it on Bu Zhongxin’s table. His other paw snapped off the chicken neck and then slashed open the chicken belly to dig out its internal organs. The operation was very standard.
Bloody beasts were coming! Bu Zhongxin felt a breath of cold air coming up from the soles of his feet.
Liu Weiwei patted Xiao Hei’s head as a reward. She cleaned the broiler chicken it had dealt with, and showed a kind smile to Bu Zhongxin. "Doctor Bu, eat more, you are welcome."
Bu Zhongxin felt chilled. But soon, when he gnawed on his first chicken wing, he instantly forgot the cruelty of Xiao Hei. He was so moved and slipped into the world of delicious chicken.
While they were eating happily, the ward they were in was cursed three times.
"The man next door, this is the hospital, this is the military clinic!"
"Eating, can you pay attention to the other? Consider whether it is troublesome for others?"
"That chucking sound of your mouth and the strong smell of food, please take care of it, okay?"
Bu Zhongxin looked back with a chicken bone in his mouth. He was about to stand up, but Liu Weiwei took the lead. She walked to the door and opened the door directly. "So sorry." She deliberately opened the door very wide. The chicken fragrance that broke open from the dirt mound rushed into the nose of the tall blond man standing on the other room.
His body shook in pain.
Xiao Hei on the ground was even more exaggerating. He snapped its claws on the other dirt mound that Qin Mo just took out from the oven! The aroma… like a whirlwind, it was overwhelming!
With a snap, Xiao Hei rudely bit off half of a chicken leg, turned his dog-like head towards the blond man, and showed an extremely enjoyable expression. The skin was tender and the cartilage was soft, when chewed, it’s a fairy~
Xiao Hei swallowed the meat crookedly into his stomach, and licked his paws one by one.
Saibandes: "…" Just as he was struggling, wanted to speak but wanted to leave, the door in front of him slammed shut with a merciless and hateful bang, almost snapped his high nose.
The two soldiers standing at his door all looked at him with complex expressions.
One, two, and three golden hairs on Saibandes' head turned up. "Call the dean! I want to see the dean! I will donate one billion, no one should be allowed to live next door!"