"In cabbage and pork dumplings, the other important protagonist of the stuffing is cabbage." With a stroke of the knife, Liu Weiwei rolled the neatly chopped cabbage into the empty basin next to her. Her movements were so fast that even Zhang Congzhi, who had been looking up and staring, still couldn't see how her hands moved this time, let alone the little girls who was busy taking notes.
When the girls raised their heads, their faces were anxious. They didn't see the movement, they only saw the end of Liu Weiwei's cabbage cutting. They didn't even see the action, let alone learned it. The little girls were so anxious that they almost shed tears.
Liu Weiwei turned her head and saw the girls waiting with pitiful appearance, and she couldn't help feeling soft. She dried her hands and touched their heads. "It doesn't matter, I will continue to demonstrate later. You are not required to finish the vegetable cutting part. It is still too dangerous for you to use a knife. You can learn more when you grow up." As soon as she said this, the two girls shyly broke into laughter.
However, Zhang Congzhi looked weird, "We don't need to cut the meat? Then why you showed it to us?"
Liu Weiwei turned around coolly, leaving him with a cool back, "You can rest if you don't want to see it."
Zhang Congzhi shut up instantly, squeezing his fist and did not speak. Liu Weiwei knife skill was just so magical. Her posture when cutting vegetables was smooth and graceful, but also extremely thunderous, and fast. He couldn't look away at all.
He wanted to learn... Zhang Congzhi gritted his teeth.
But Liu Weiwei didn’t see this and continued to explain, "Salt the chopped cabbage first. After 10 minutes, the water in the cabbage will slowly flow out. After studying biology, you should know how this water comes out, right? Salt is added to prevent the cabbage from excreting water when we are cooking the dumplings. If this happened, the entire dumpling skin will become loose or even mushy."
Liu Weiwei picked up the salt jar and heard a timid voice.
"But why cabbage is drained, but water is added to the minced meat? Isn't this contradictory?"
Liu Weiwei turned her head in amazement. She looked at the girl with big eyes and pink cheeks like a dumpling behind her. She couldn't help but move in her heart. Qin Mo really had the vision. A girl was indeed soft, cute, and sensible. She was so clever in asking questions, a very good baby. Liu Weiwei wanted to pinch the small face and hugged the girl in her arms.
"Well, this is a good question." Liu Weiwei glanced at the girl appreciatively. Many chefs had little understanding of many principles. If someone asked a chef why he was doing something a certain way, why it was ‘an appropriate amount of oil’ or ‘a little salt’, many chefs would say that it was experience, when actually the key to seasoning calculation was ratio. In fact, there was a basis behind every action, but most chefs didn't go deep into it.

"When I added water to the minced meat, it was stirred." Liu Weiwei took the bowl of minced meat back, took out a chopstick and inserted it in, "Look, after stirring, the minced meat began to vigorously change. It needs to be sticky for the meat to become very elastic when it is cooked. If you don't add water and only wait until the water from the cabbage comes out, the cabbage filling will not be completely mixed with the meat filling when the dumplings are cooked. The water will not melt into the meat filling to the extent that allows the meat to be vigorous and elastic. So it is important to let the meat already contain water."
Liu Weiwei took a tuft of meat and motioned to the questioning girl to stretch out her hand. She put the meat on the back of the girl’s hand and winked her eyes, "You touch it, does this meat feel sticky after we added water and seasoning?"
The little girl felt a little sick at first, but she picked a piece with her thumb, squeezed it in her hand, and nodded immediately. The others could also see that the girl’s thumb and index finger were almost glued together for a moment and it took a little effort to separate them.
Liu Weiwei smiled and took out a tissue to help the girl wipe her hands, "What's your name?"
The little girl suddenly looked up nervously, "My, my name is Han Zizhu."
"I will reward your courage to ask questions and also your deep thinking, plus 50 points."
The little girl opened her mouth in astonishment. She glanced at the other small bean girl who was about the same height next to her. The two of them shook their hands in surprise.
"Thank you, teacher!"
Liu Weiwei washed her hands and quickly chopped the shallots and green onions, mixed in other fillings, and added sesame oil.
Next, was the dumpling dough.
The robot directly took out the dough that had been proven. The two mechanical arms worked together to quickly knead the dough into two even large thick strips.
Liu Weiwei quickly cut the thick noodles into fifty equal pieces of dough with her knife, sprinkled them with some more flour, and pressed them down one by one with one hand. She then took a rolling pin in her right hand and dexterously rotated the dough counterclockwise with her left hand. It didn't take long before the small piece of dough turned into a uniformly thick, round and smooth dumpling wrapper.
The three children exclaimed once again.
"I can't even draw a round shape with a pen..." (TN: T-T me too.)
"It's amazing. But it feels like we have to practice for a long time."
"It turns out that dumplings are made like this. It's so difficult."
Xu Hui knew how powerful Liu Weiwei was since the beginning, but she didn't know that her hands were so flexible and dexterous, as if any ingredients would become exquisite and lovely in her hands. But things were not over yet.
Liu Weiwei picked up a dumpling wrapper and scooped a spoonful of filling that had just been made. Her index finger and thumb of both hands flew up and down, and a vivid and bulging ingot dumpling appeared in the center of her hand. 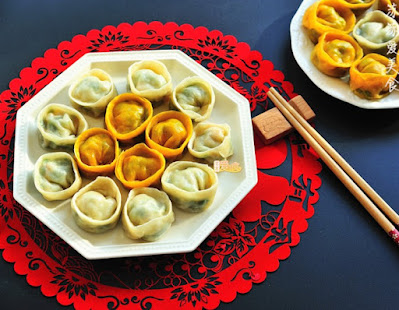 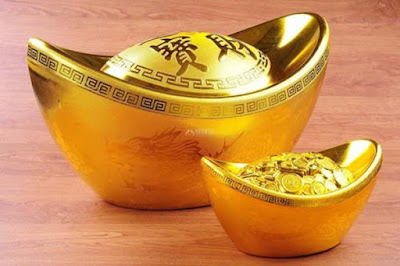 (TN: Ingot Dumplings/元宝饺子/Yuánbǎo jiǎozi is shaped mimicking a Golden Ingot/元宝/Yuánbǎo used as currency in ancient China.)
"Wrap them like this and cook it. This is most of your task on D-day." Liu Weiwei put this sample on a clean plate. "If you still have enough time these three days, you can also learn how to make dumpling dough. If the time is not enough, I and the robot will do it."
The three children were suddenly nervous. When they heard that they wouldn’t need to cut vegetables, they thought the following procedure would be easy. But they didn't expect that after watching Liu Weiwei's cool and fast action in wrapping dumplings, their remaining confidence also flew away.
Liu Weiwei’s movements were so smooth. They watched and marveled but they all forgot to record videos for learning. But fortunately, Liu Weiwei's movements did not stop. She made more than 20 ingot dumplings and also slowed down her movements a bit. But even then, when the children tried it for themselves, they were all in a mess.
It was just wrapping the filling with dough, but they all gave 120% spirit, even hostility that Zhang Congzhi had previously slowly transformed into an effort not to give up. His forehead was even sweating. Obviously everyone had two hands, and their underage hands were smaller so should be more suitable for delicate work, but it turned out that the dumpling skins were not very obedient in his hands. After three consecutive tries, the dough was torn.
Zhang Congzhi looked at the two girls beside him and found that although they were usually useless and liked to cry, but even if the dumplings they made today looked ugly they were still wrapped up. Only him, even the meat filling was exposed.
"You put too much stuffing, classmate Zhang Zhang." Liu Weiwei glanced and saw the problem.
Zhang Congzhi’s name was suddenly called, and the dumplings in his hand almost fell on the table. Looking up again, his expression was extremely complicated, "Did my mother make you pay more attention to me?"
Liu Weiwei turned her head, as if she hadn't heard him.
Zhang Congzhi: ...
After half an hour, even Xu Hui, who was watching by the side, couldn't help but joined in. She was quite talented and the dumplings she made had become decent after first few failed products.
Liu Weiwei looked around and took away everyone's finished products. "Remember what your dumplings look like and claim them later." She heated some water in a pot and threw the dumplings down when the water was boiling. She also added some cold water twice to avoid over boiling. When all the chubby dumplings floated on the surface, she picked them up with a large spoon and placed them in a circle on a plate.
The twisted dumplings were very conspicuous in comparison with Liu Weiwei's standard ingot dumplings. Both girls blushed, and they knew at a glance that the twisted ones were the ones they did. But soon they took a look at the broken-skin dumplings that even had the meat filling fell out on the plate, and they breathed a sigh of relief. They were obviously not the worst.
Zhang Congzhi squeezed his fist and couldn't lift his face anymore.

"You still have three days to practice." Liu Weiwei's eyes floated over, making the bear child's ears become a little red.
"Try it."
Every step of making dumplings was presented to the children. But only by eating would they know what the dumplings were and why they were so complicated.
The little girl who asked about adding water bit half of the dumpling and blew some hot air. Her eyes were bright, her face flushed and filled with excitement. "Delicious..." Finally, it was not so hot and she directly made a voice of praise and emotion. Her eyes widened when she swallowed. "After adding water, the dumpling meat really becomes delicious. I can feel the moisture coming out of the meat as soon as I bit it. It is soft but tight... the cabbage is also very crispy and tender."
Adjectives on these children were very limited, but the little girl kept holding the fork in her hand and she was about to jump up happily when she was eating. The little excited appearance fully proved the deliciousness of the dumplings.
The other girl's eyes were red, "I ate… such a delicious thing… for the first time. After I learned it, I will go back and make it for my mother."
Zhang Congzhi also tried the dumpling with the fork in his hand. He quickly turned his head away, roughly stuffed a tuned meat into his mouth, and chewed hard.
Liu Weiwei glanced at the other little girl and nodded with a smile. "Well, good idea. What's your name? For your filial piety, I will add 50 points~"
As the only one who hadn't been praised, Zhang Congzhi had no bonus points.