Liu Weiwei's voice was not loud, but it made everyone present refreshed. Make everyone know about food. It's simple to say, but it might not even be realized within three to five years. This required a lot of manpower and material resources.
"Okay, I understand. The price of pickled chicken feet will be determined by Mrs. Liu." A man like Zhao Minggen was also inevitably moved.
After Liu Weiwei talked about some time arrangements and the initial sales strategy, she took out two large packages of chopped pepper chicken feet that had been plastic-wrapped and handed them to Zhao Minggen and his daughter. "Take it back as a snack. If you have any suggestions after tasting them more, we can communicate at any time."
Zhao Linshuang's eyes were full of golden light. Her eyes fell on the large bag of chicken feet. She couldn't help herself. The fear and nausea had long since disappeared. Now she was in love with the smell instead. Although after gnawing a piece, her lips were now a little red and swollen, but it didn’t affect her greed over the large package of new snacks.
"How embarrassing is this. You gave us such a big bag." Zhao Minggen, the middle-aged uncle, also had an uncontrollable smile on his face. He had already grabbed the snack but still pretend to push off with his other hand.
An Hao and Zhen Nuli on the side were completely accustomed to this fallen appearance. This was not a new thing at the Happy Restaurant. They didn’t know how many diners surrendered under the crafts of their teacher. They felt uncomfortable if they didn't come up to eat a meal every day, and they wanted them to open a new restaurant that open 24 hours.
Liu Weiwei and Boss Zhao left exchanged other's contact information. Zhao Minggen even said that he would continue to visit the army and would meet with her again when that time comes.
When Zhao Linshuang said goodbye, her previous embarrassment changed and she looked at Liu Weiwei with admiration, "Boss Liu, this chicken feet is delicious, I will definitely help you promote it!"
At this time, Liu Weiwei thought it was a polite remark, so she didn't think much about it.
…

Liu Weiwei went offline because she had been summoned by Li Sanpang. The hot pot soup base development had achieved remarkable results. She hurried to the research institute, and soon smelled a charming and familiar fragrance at the door.
"Come on! Little girl, come and try it." Li Sanpang changed her name now.
As soon as Liu Weiwei entered the office, she saw the entire two-meter-long laboratory table filled with nearly 30 boxes with different colors and labels. There were various soups with strong smell in the box, and some common hot pot ingredients could also be seen, such as mushrooms, fried tofu, beef slices, meatballs, lettuce… She was a little shocked. Wasn't this the instant hot pot that was a smash hit in ancient time? 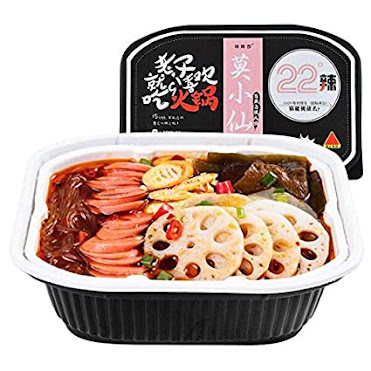 "Would you like to try it yourself? Tear open the hot pot bottom material package we developed, put it on the upper layer of the box, and pour in water. Both cold water and hot water are ok. Meanwhile, put the portable heat bag into the box below and add cold water. Assemble the upper and lower boxes, close the lid, and within 15 minutes it will become a personal hot pot ration for march training!"
Li Sanpang's entire face was very proud. "This solves the problem that the soldiers have. It is convenient to carry, supplement various vitamins, dietary fiber and protein, and meet their ultimate needs for varied tastes!"
Li Sanpang quickly picked up a pair of chopsticks and started eating. "The taste… tsk, after many experiments, we divided them into 30 comparison groups and found the most suitable ingredients for the package. These are what you see, mainly vegetables."
Li Sanpang himself took a bite of lettuce first, his face was instantly intoxicated, his eyes narrowed and he said, "Delicious~ I'm a genius!"
Liu Weiwei did admire their speed in doing research. Basically, every scientist had dark circles under their eyes, and the corners of their mouths were chapped. It could be seen that they had tried their own research results these few days. People who were not accustomed to eating spicy food would definitely get side effects after eating heavy taste every day.
"Recently, there is a team that is going to the wild to participate in a 30-day survival training." A scientist wearing glasses on the side touched his chin. "If Clerk Liu thinks that there is no problem, we will prepare a report and apply to propose this instant hot pot as part of their supply."

Liu Weiwei blinked, "Hot pot smell is heavy, won’t it affect the operation? If the soldier's position is exposed, it will be dangerous, right?" She knew that carrying hot pot was not suitable in secret missions.
"Don't worry." Another scientist held a 75×75cm three-dimensional transparent mask. "For this reason, we designed a protective cover to isolate the smell. This cover can protect and isolate from the head to the stomach."
"Yes," Li Sanpang nodded his head, "I also found an energy stone. If we put it in the hot pot box, the smell can be absorbed by 95%. With the addition of Dr. Zheng's protective cover, there will be absolutely no possibility of leakage."
"Of course, it is still in the testing stage. We will continue to strengthen the odor processing, and strive to be foolproof." The scientists were very strict.
Liu Weiwei was very impressed. She took a bite of the finished product, which turned out to be quite good. It's not as refreshing as freshly made hot pot, but it tasted almost the same as the portable self heating hot pot in the past.