Tonkatsu was a favorite of many people when they were young, even when they were older, they couldn't give it up. Many delicacies cooked by senior chefs were not as tempting as a piece of fried pork or chicken meat that had just been cooked, piping hot, crispy, and fragrant.
Zhao Linshuang was embarrassed and ashamed. The tonkatsu was picked up from the oil pan by the robot. It was golden in color and bigger than her palm. Tonkatsu that had been cut into even strips were served. She couldn't help but swallowed. Although she made subtle movements and tried her best to be a lady, she still couldn't hide from the gaze of a chef.
"After Teacher’s full massage today, I also gave this pork a soothing music. You will know when you taste it. The meat is soft and it completely doesn’t need any effort to bite. It is a fighter class tonkatsu. It is the most enjoyable this year." Zhen Nuli started beeping again, with a proud look on his face. As he finished, he snapped his fingers. The robot next to him walked over, holding an antique radio-style instrument in his hand.
"Teacher?" Zhen Nuli looked at Liu Weiwei a little embarrassed.
Liu Weiwei nodded.
So, when Zhao Minggen picked up the chopsticks and Zhao Linshuang poured the spicy soy sauce to a small dish, a strange cry came to mind in the small private room.
"Huh… huh… Ohhhhhhhhhhhhhhhhhhhhhhhhhhhhhhhhhhhhhhhhhhhhhhhaaaaaaaaaaaaaaaaa"
These weird calls, one after another, became louder and louder, almost forming an echo effect in the entire small private room.
Liu Weiwei's complexion did not change, but the corners of her mouth rose. She bit a small piece of pork chop and started eating with relish.
Although An Hao was a little uncomfortable at first, his expression gradually became better, and the food in front of him was quickly wiped out.
Zhen Nuli shook his head. He also leaned close to the dinner plate in front of him and sniffed his nose vigorously. He sniffed it from left to right. With his black uniform, he looked like a big black pig looking for food!
Zhao Minggen glanced at his daughter. They needed to follow the local customs, so after a short stalemate, they quickly adjusted their state and set their sights on the tonkatsu in front of them. The crispy golden breadcrumbs, wrapped the thick pork tightly. The beautiful and natural texture of the meat had become extremely charming, exuded the greatest seduction and temptation to human desire. Among pig cry sounds, smelling the scent of food, they also felt like they were suckling pigs looking for food. The suckling pig ate slowly, grew slowly, and eventually became a delicious tonkatsu on the plate. 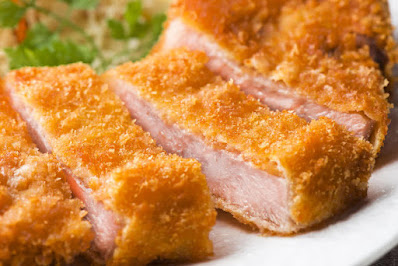 Zhao Linshuang finally bit into the crunchy breadcrumbs, and her teeth touched the thick fleshy texture that was tender, full of juice and essence… The spicy soy sauce on top was slightly spicy and the saltiness also let the pork essence rush to the forehead from the tip of her tongue. It’s so delicious that her heart shrinks violently. It was like riding a high swing, when she went to the heights with the wind, she saw a different beauty. Or like sitting on a 50-meter-long slide, when she got to the ground, she felt an extraordinary thrilling experience. Simple tonkatsu, but it could have such a sinking and inextricable impact!
"The meat is tender and flexible, but still tight and symbolizing vitality. It is just like the pig cry that I heard just now, it is alive! I can feel the pork meat in my mouth. It moved to find exquisite foods time and time again, and its meat is full of amazing vitality." Zhao Linshuang was deeply amazed by the deep-fried food. The soft taste of the omelet rice just now echoed in her mind. It complemented the crispy, firm, and juicy pork cutlet. It seemed to be the strongest contrast but also the perfect partner. It's like the missing half of the soul has been filled! On Skynet, she suddenly had the urge to eat fifty pork chops in one go.
Zhao Linshuang glanced at Liu Weiwei who was sitting across from her. At this moment, she couldn't help feeling that her previous self was extremely stupid. What was it that gives her the courage to fight such a powerful gourmet chef? She actually insulted such a talented chef… She made a terrible mistake! The food in her mouth was no longer just a taste and visual enjoyment, but a soul and spiritual comfort. This was the creation of a great top chef.
"Sorry!" Zhao Linshuang was no longer afraid of embarrassment this time. She lowered her head and solemnly apologized to Liu Weiwei.
Zhao Minggen looked at his daughter beside him. He gave a comforting smile.
At this time, Liu Weiwei couldn't help but think of Qin Mo’s daughter theory. He finally realized the complicated psychology of expectant fathers and mothers. "Let the past pass. I didn’t receive any harm, and I have received the gift you mailed to me. I like it very much, and Xiao Bai also likes it. It has forgiven you, and I as its Master also won’t take it to heart."

While Liu Weiwei was talking, An Hao and Zhen Nuli were very curious, but they didn't ask anything. One let the robot serve vegetables, and the other talked about the food in the shop.
"Boss Zhao, Miss Zhao, you should come and patronize our shop more when you have time. If it doesn't taste good, you don't need to pay."
Zhao Linshuang blushed and nodded desperately, "I’ll… definitely come, it's delicious, I also ate the chopped pepper fish head last time, it's really delicious."
Zhao Minggen stared, "Fish head? It sounds delicious. Shuangshuang, if you eat delicious food, bring Dad also."
"Dad, the shop has not sold the dish again after that time. And you are so busy with work every day!" Zhao Linshuang puffed her mouth.
Everyone laughed.
"Our shop’s dishes are only available in limited quantities, and the daily set menus are rotated. There has not been a repeated recipe within the past two weeks. Speaking of this, meeting with boss Zhao, I also wanted to discuss the sale of vegetarian duck." Liu Weiwei couldn't help but frown when speaking of this.
Zhao Minggen understood in seconds, "Boss Liu, do you want to talk about the hoarding by scalpers? Last time I received the message from Nuli, and now we have all set the rules for every sales channel. Each person’s light brain has a unique identification code, and each has been limited to be able to purchase only ten vegetarian ducks a week. However, even with such regulations, there are still many scalpers who hire people on the Internet to place orders at nearby stores and then buy it again from them. It is difficult for us to really control these scalpers, so we can only talk about other methods."
Liu Weiwei raised her eyebrows and put down her chopsticks. She knew how tricky this matter was. In her last life, when she wanted to buy a concert ticket, it was very difficult. Within one minute of the sale, the official website would either be stuck or the ticket would be sold out directly. In the end she could only purchase it at a higher price from scalpers.
It was very common for a concert ticket to increase by one or two thousand yuan, and it would be rising more as quantity decrease. Once people hesitated or decided to slowly, the might not be able to buy it even if the price doubled. Scalper was like a cancer. It was difficult to supervise and even more difficult to eliminate.
"So what I think is to continue to increase the production volume. We don't want vegetarian duck to become a limited item that only rich people can buy. We want to make it become ordinary households snack and also something an ordinary wage earner can afford."

When Liu Weiwei said this, Zhao Minggen and Zhao Linshuang on the opposite side changed their faces in astonishment. In their opinion, the price of vegetarian duck at 5,000 per portion was already very low. The reason why the scalpers could raise the price up to 20,000 to 30,000 was because of short supply, and also because those who were buying could afford higher prices. They didn't expect that Liu Weiwei not only did not increase the price or harvest the huge profit margins of the scalpers, but instead wanted to sell at a lower price.
Liu Weiwei couldn't help laughing as she saw the father and daughter being dumbfounded. "That’s what I think. If the price of 5,000 dives too low, it will be unfair to the early consumers. Then simply differentiate the product, one is premium vegetarian duck, and the other part is ordinary vegetarian duck. Both will have the same taste, it’s just that there will be some slight differences in the ingredients and the entire production process. Ordinary vegetarian ducks will have less production cost. If people don't care about perfect taste or perfect quality of product, and are willing to purchase cheaper version, they can buy this instead. Of course, even the lower priced product also has to pass food safety inspections. Consumers and various sales channels do not have to worry about this."
Zhao Minggen stared. He never imagined that he would introduce cheap food into the market. "Chef Association…"
"Boss Zhao, what if the low-priced food is verified by the army first? After lowering the seasoning price, the price of food should also be lowered to give back to the society, what do you think?"
Zhao Minggen took a deep breath. Hhe almost forgot, the girl in front of him was not an ordinary person. As a cooking soldier in the army, and after listening to his daughter’s previous explanation, the person his daughter had offended was the chef of the military cafeteria. Behind this vegetarian duck maker was the support of the army!
Zhao Minggen was also one of the participants in the production of seasonings for the army. It was clear that the army was determined to promote real food to the other barracks. Could the Chef Association suppress army rations? Not to mention one Chef Association, even if there were ten, the army could lift up his sleeves and spray back!
Zhao Minggen's expression couldn't help being solemn. As a retired veteran, his eyes on Liu Weiwei couldn't help but become more admiring. Not for self-interest, thinking of the soldiers and for the sake of ordinary people first, Liu Weiwei couldn't help becoming tall in his heart. "Okay, Boss Liu, I will fully cooperate with you! When necessary, even if it is a non profitable thing, I will work hard to promote the popularization of vegetarian ducks." He said loudly.
Zhao Linshuang on the side already had a worshiping face.
"Okay. Then let’s talk about the new snack we are going to launch next." Liu Weiwei smiled mysteriously.
Zhao Minggen was taken aback, "So fast?"
Liu Weiwei smiled and nodded, "Snacks need to be plentiful and varied to meet the tastes of different groups of people." While she was talking, a robot had already arrived with a small basin.
When Zhao Linshuang looked into the basin with expectation, she suddenly turned pale and almost jumped out of the chair in fright! "Chicken, chicken feet!"